Lessons From History: The Winter Soldiers
Choose to overcome, and be a winter soldier for God.
By Abraham Blondeau • Jan. 30, 2014 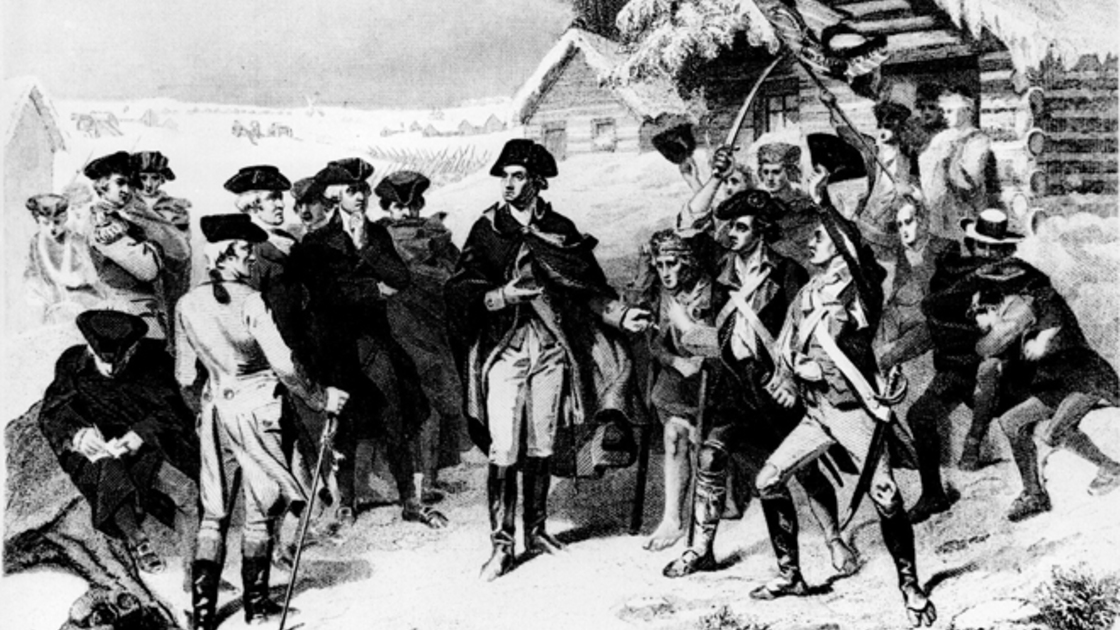 Never had the flames of freedom looked so bleak as in the winter of 1776. The British were driving George Washington’s Continental Army to flight in each battle, leaving the American capital open to capture. Gen. Charles Cornwallis seemed like he had finally broken the American resistance, and even the resolute Washington could not compensate for inferior numbers, training and equipment.

What saved the American Revolution that year was a trial of supreme endurance and resolution. As the winter set in, Cornwallis put his soldiers into winter quarters. The Continental Army marched out of the reach of the British into their own winter quarters, a place that would become legend: Valley Forge. Most of the men who marched into that camp had no shirts, coats or boots—many left bloody footprints in the snow as they lurched toward a camp with no shelter, buildings or comforts.

At the head of this column of “half starved, half clothed, half armed, discontented, ungovernable, undisciplined wretches” was the indomitable George Washington. There were no reserves—no help from other men. The grand American ideal rested upon the shoulders of Washington and his defeated men.

What kept these men going through the long weeks sleeping in log cabins with the wind screeching through the walls into their beds? What kept them going when some men had only a jacket to share for sentry duty and one whiskey-filled hat to stand in so their bootless feet wouldn’t freeze? What made them stay in a place where they had one meal a day? What kept them from returning to the loving embrace of their wives and the warmth of their own homes?

These men had every reason to give up, to stop fighting the good fight. They had every reason to escape the cold, frostbite, hunger, sleeplessness and depression. But they did not follow the logical course. In their hearts burned a dream and vision that could not be quenched by the elements or mere pain. It was an understanding that there was no one else—that upon their shoulders rested the burden of destiny. They either conquered or died.

Thomas Paine accompanied these men along this journey, and after looking deep into a fire one night, he penned these words for these winter soldiers: “These are the times that try men’s souls …. The summer soldier and sunshine patriot will, in this crisis, shrink from the service of his country; but he that stands it now, deserves the love and thanks of men and women. Tyranny, like hell, is not easily conquered; yet we have this consolation with us, that the harder the conflict, the more glorious the triumph.”

Have you met your Valley Forge? None of us have faced this level of desperation and trial, but you do face many pressures and trials each day. There have been many times in my life when I have felt like giving in to temptation was the best thing to do—so much easier than continued resistance. But despite any heartache, pain or difficulties, isn’t it better to endure as those winter soldiers did? Did they not show more character than we do sometimes?

We each individually must overcome our own Valley Forge and endure all the trials and hardships this life may throw at us. But just as these men endured for the cause and the hope of a better future for their families, so must you and I. We must not be summer soldiers or sunshine patriots, but people of character who are willing to fight even in the bleakest of winters. Could you look those men in the eyes and say you endured?

Do you realize that you have something at your disposal that those winter soldiers didn’t have?

Mr. Armstrong told a story in an October 1957 sermon about a man who said he wasn’t strong enough to overcome, who felt like giving up. Mr. Armstrong responded to that man: “Of course you can’t, but Christ in you can! … Why [not] go more to Him in prayer? Why don’t you cry out to Him and say, ‘Lord God, I’m weak; I can’t do it, but you can! You’re strong. … Lord God, give me the strength that I may overcome!’”

You can’t do this on your own! You can’t be a winter soldier for God if you don’t rely on His strength! We must make a conscious choice to endure, but even more, we need to go to God about our trials and problems. Seek counsel from those led by God’s Spirit, like your parents and the ministry. Just like the soldiers at Valley Forge looked to General Washington, we need to look to God for guidance.

How did their story end? What became of these winter soldiers? After weeks of battling the hunger, cold and hardness of Valley Forge, they finally had their chance to strike back. On Dec. 31, 1776, the Continental Army crossed the treacherous ice-filled Delaware River under the cover of night. They had planned a surprise attack on the outpost of Hessian and British troops at Trenton, New Jersey. The celebrating enemy were taken by surprise and completely routed. This was the victory the Revolution needed, and it turned the tide of the war.

We all go through our own Valley Forge at times, but remember that if you endure and live with the vision of your future burning in your heart like a fire, you will succeed and overcome. If you ever feel like giving up, quitting or admitting defeat, reject those thoughts. Choose to overcome, and be a winter soldier for God.