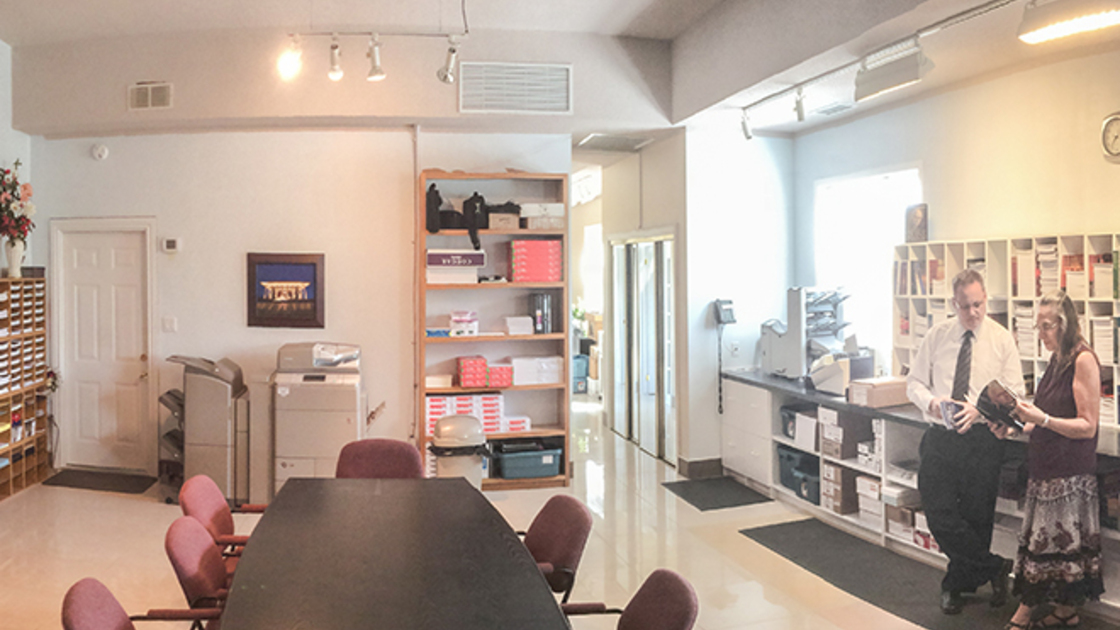 CANADA—Over the summer, the Philadelphia Church of God’s Canadian regional office added three new offices to accommodate a new staff member, additional mail processing room and additional production space. Pastor General Gerald Flurry approved the expansion in early May, along with the addition of a fleet vehicle, which has begun to dramatically offset the costs of local ministerial and administrative travel.

Leasing the new office space has expanded the regional office by nearly a third, from 1,800 square feet to 2,550. The new lease marks the second acquisition of additional floor space since 2010, when the office was approximately 1,200 square feet, contained only one office and two workspaces, and lacked a dedicated mail room.

The upgrades in facility space came as the result of increased responsibilities for the regional office, including mailing literature within Canada and other services that were repatriated from headquarters. The office has also handled an increase in requests from Key of David viewers, co-workers and subscribers. The office added new printers, mail automation equipment and storage, which had the facility’s mail room and office space bulging at the seams.

“Over the course of the last six years, the Canadian regional office has steadily taken on more of the responsibility and duties required to serve Canadian members and subscribers that were formerly handled by headquarters,” Regional Director Fred Dattolo said.

“Twice, we’ve needed more office space, especially when we needed to set up a mail processing center to fulfill literature requests,” Mr. Dattolo said. “And each time we’ve needed to purchase equipment and expand, God provided the office space right next door due to other tenants vacating their space. We have tripled our office space and haven’t had to move.

“Not only that, but when we approached one of the tenants that was leaving with a proposition to donate their office furniture to the Church so they could get a tax-deductible receipt and avoid the cost of moving it, they embraced the idea,” he said. “God has made it much easier for us to expand the Work in Canada while providing faster service to Canadians at the same level of quality they were used to getting from headquarters.”

The new offices changed the overall office layout from an “L” to a “U” shape, with a common building corridor down the middle. The original section on the vertical part of the “L” now includes an office for newly hired Herbert W. Armstrong College graduate Tyrel Schlote. The bottom of the “L” includes the mail room that was leased and added in 2010. It also doubles as a venue for the local Spokesman Club and graduate club.

By knocking down a small wall in the corner of the mail room, the staff was able to join the original “L” shape to the new offices, creating the “U” layout, which allows the office’s four staff members to move throughout the entire space without having to use the corridor, which is shared by other office tenants.

Fleet VehicleThe Canadian office purchased a fleet vehicle the week of May 12. With two local ministers traveling from the regional office to congregations around eastern Canada, along with local administrative travel and other needs, the office leadership found it financially prudent in the long run to purchase a vehicle that could be shared by ministers and employees. It has been calculated to pay for itself in about 2½ years. After that, it will save the Work about $12,000 per year, after expenses.

After he received the pastor general’s approval for the purchase, Mr. Dattolo inquired with a local agent about a fleet vehicle. The timing proved to be advantageous, since a used minivan had just returned to the dealership from an expired lease agreement, and had not even yet been cleaned for showroom display. It was of sufficient quality in terms of build, age, condition and mileage.

Mr. Dattolo said that after praying about the purchase and having other staff members join him in inspecting the vehicle, the decision was right and the timing was right. The office purchased the van on May 15 and immediately put the new vehicle into service the following day.

According to Schlote, the new fleet vehicle has been a real help. “It’s been a great addition to the work in Canada, especially since it is so spacious, helping not only the ministry with their responsibilities but also helping with local Church needs, offering cargo space for the transportation of goods for activities.”