Remove the Pressure
How you can stand resolute and confident in the midst of peer pressure.
By Greg Nice • Sep. 16, 2014 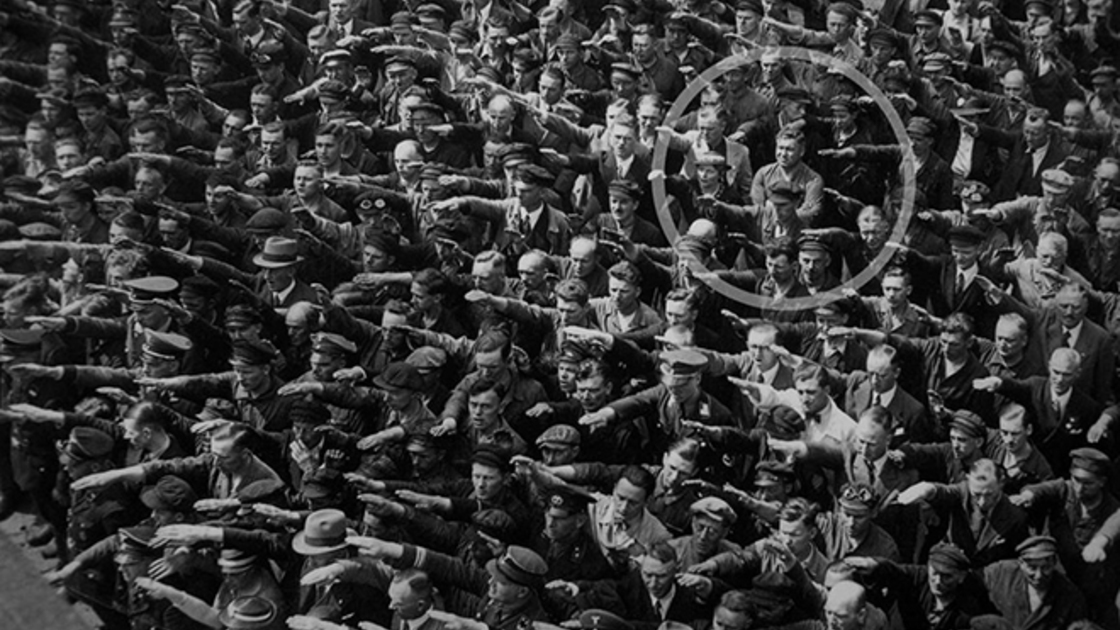 As you look at the picture that accompanies this story, what do you see? What strikes you about it? What would you title it? The individuals in the photo are all strangers to you, but perhaps there is one who intrigues you above all the others.

Obviously with the ring imposed upon the photo, it is hard to miss him. Still, if the ring were removed, and you took the time to search the photo carefully, you would be struck by his posture and his inaction. Hundreds of German shipyard employees in Hamburg are raising the Nazi salute at the launching of a new ship—and one man refuses to do so.

I believe one could title this picture “Peer Pressure.” His fellow workers, his supervisors, and his managers—some most likely his friends—are surrounding him and intent on projecting the salute. Do you think he felt pressured by his peers to participate? Isn’t this a pictorial definition of peer pressure?

Young people often battle peer pressure. Classmates at school, other kids in the neighborhood and, yes, even friends at Church oftentimes apply pressure to them by their actions, by their words, and by their looks. As a youth, you often feel hindered from doing the right thing or saying the right thing because the crowd expects you to do what they are doing, which you silently know you don’t want to do.

What can you do with all this pressure? It can push you toward things you should not be doing, and the fear is that if, at some future time, you do succumb to the pressure, a tragic consequence might result—a consequence that can impact the rest of your life. But if you do not go along with your peers, the backlash at the moment might seem worse: criticism, rebuke and/or total dislike. And our nature is to avoid that at all costs. So what can you do about this peer pressure issue?

Look at the picture again. Do you see any teenagers in that picture? There aren’t any—but there is plenty of pressure among the adults in the picture. Young people, what you call “peer pressure” affects everyone—it includes all ages. As youth, peer pressure is new to you; it might occur more often now than it will later in life, but it is always present.

So you need to stop it—and stop it now. “Why do you keep saying that?” you are probably asking.

What I am telling you is that people are people, young and old. And people with their carnal human nature desire their own way. They desire acceptance, and from that acceptance, a confirmation that they are in line with everyone else. So what we end up with in society is followers following other followers. There is nothing wrong with being a follower, but you must follow the right leader.

Our human nature wants us to be the victim. It happened, but it wasn’t my fault—it was out of my control. We all like to have an excuse, and we like to blame many of our problems and mistakes on peer pressure. I am telling you now: You are the one putting on the pressure, not your peers. You are insisting that you must accept their way as the way to act, the way to live, the way to talk, the way to listen to music, the way to fix your hair, the way to show support for your nation, etc.

Look at our man in the picture again. He isn’t ducking his head; he isn’t acting as though he did not notice it was time to salute; he isn’t reaching into his pockets like he is searching for something and can’t get his arm raised in time. No, he is standing square with his head up and his arms crossed. I don’t believe he is feeling any peer pressure at all. Long before this event, he decided that he would not support the Nazi Party with any public display. So he made the decision, and he removed the pressure. He could be surrounded by hundreds of people doing something he disagreed with, and remain comfortable because he had made a decision beforehand about how he was going to live. He wasn’t going to support the party regardless. He addressed what he believed early on and felt no pressure when the challenge came.

Here’s a far-fetched example: Let’s say four or five of your friends are together, and they tell you to break a bottle and then eat the glass. Are you going to do it? No, because you are smart enough to know what the results of that would be.

So do you feel pressured to do it? No, even though the gang continues to press you, you know you are not going to chow down. So is there peer pressure at play here? Not really. Because of your wise previous decision never to chew glass, you don’t feel any peer pressure in this situation. You stopped it before it began. So who is responsible for turning peer pressure on or off?

So how do you determine what your decisions are going to be when it is not as clear-cut as chewing on broken glass? Many things you feel pressured to do are not black and white when you are in the midst of them: wearing a little makeup to school to avoid unwanted criticism, sharing a beer with the gang, talking and joking about sex, etc. Are you concerned with what the gang will think of you if you don’t eat the glass? Not in the least: You are thinking, If this is the intellect of these folks, then I will have to find other people to be with. You must take the lead in what you will allow in your life and what you will not—and that is when the peer pressure is removed.

For the rest of your life, others will insist that they know how you need to live. Learn now that you are the one in control, and that you can either apply peer pressure to yourself, or you can stop it altogether.

Isaiah 51:12 reads: “I, even I, am he that comforteth you: who art thou, that thou shouldest be afraid of a man that shall die, and of the son of man which shall be made as grass.” Do you apply peer pressure to yourself because you fear what others may think? Why fear individuals who will have no more concern or long-term impact on your life than a blade of grass?

How far can you go when you are among the crowd? The book of Proverbs shows in many places that youth and others are devoid of understanding and lack wisdom—and are manipulated into bad situations because of that lack of understanding. The Bible talks about being induced into wrong actions by other people—yes, the Bible talks about peer pressure. The Author of the Bible is aware of peer pressure and left instructions on how to deal with it.

Proverbs 2:1-2 says: “My son, if you receive my words and treasure up my commandments with you, making your ear attentive to wisdom and inclining your heart to understanding” (English Standard Version).

It is necessary and possible then to develop wisdom and understanding in how to deal with people from a very young age. As a young person, you can develop the proper standards, and by seeking and asking God for wisdom and understanding, you can become grounded in what is acceptable and unacceptable. If you enter into life’s arena without first developing a standard, you will be tossed to and fro by the intents and desires of others. Once you have that understanding and wisdom, God promises to guard you from the pressures of this world: “Then you will understand righteousness and justice and equity, every good path; for wisdom will come into your heart, and knowledge will be pleasant to your soul; discretion will watch over you, understanding will guard you, delivering you from the way of evil, from men of perverted speech” (verses 9-12).

2 Peter 2:9 adds, “The Lord knoweth how to deliver the godly out of temptations.” If you are asking God for wisdom and understanding, He will deliver you when you find yourself in a tempting situation or a trial. He knows that you want to be around other people, and yet if you find yourself in a situation where the conversation or action is not proper, God will deliver you from that—if you are looking to Him.

The answer to the dreaded burden of peer pressure is to rid yourself of it. You are the one who is burdening yourself with it. You don’t know what you believe is the right thing to do, so you drift and follow the lead of those who themselves don’t know what they believe. Seek God and His Word for understanding and wisdom. God did not take His people out of the world for a reason; He wanted young and old to learn to look to Him for guidance and direction on how to live. Is He going to make it where you can’t have any company with the world—where you are ostracized because of the stand you take on certain issues? No, it would not make sense for God to leave you in the world just to cast you out of it; He might as well have taken you out of it in the first place. Do not fear that standing for godly principles when pressure from others comes will leave you friendless; God promises to provide for your needs. Seeking the wisdom of God, as it says in Psalm 19, will result in rejoicing of your heart and the enlightening of your eyes.

Though some believe they have identified the man in the picture, the identification is not conclusive. I would like to identify him as you: Place your name here. You have prepared yourself by seeking understanding from God and from your family. You have left the house after seeking wisdom from God on how to deal with the world, asking Him to aid you when a sudden, or even a new, temptation to feel pressured comes up. And when it does come—oblivious to the peer pressure those around you feel—you will stand with your head up, confident and resolute.