Have You a Sizable Can of Kerosene Handy?
How important is it to you to establish and protect your name?
By Greg Nice • Aug. 7, 2014 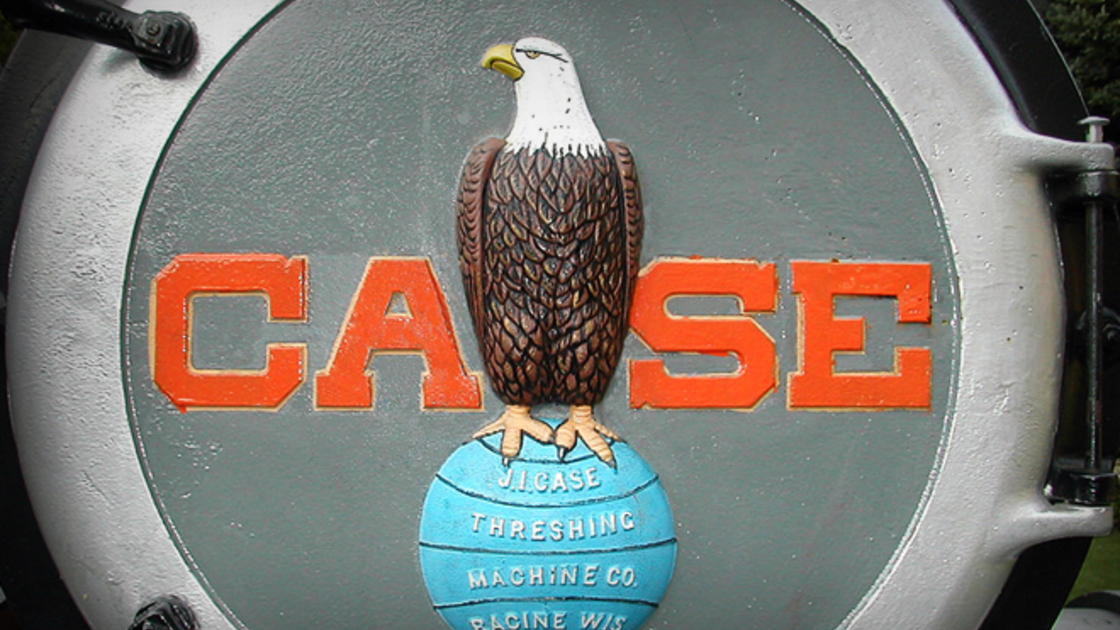 In 1884, on a farm near Fairbault, Minnesota, the wheat harvest was not going well. The crop was plentiful, but when the cut wheat was brought to the brand new J. I. Case threshing separator, there was a problem: The new threshing rig was consuming far too much power from the big tractor engine, and even worse, it was not threshing the wheat clean from the chaff.

The farmer complained, so an agent came out from town and made adjustments, tinkering with the machine for a good long while. After many unsuccessful attempts to get the new machine to operate properly, the agent gave his recommendation to the company: Take the faulty machine back, send the farmer a new thresher, or refund his money.

What happened next was astounding. A telegraphed reply from the company’s headquarters read: “Am taking next train. Meet me Fairbault. J. I. Case.” The founder and head of the J. I. Case Threshing Machine Company—supposedly the largest of its kind on Earth—was coming to this remote farm to take care of the machine himself! This machine had his name, J. I. Case, boldly displayed upon it.

This would be like the ceo of General Motors leaving Detroit and traveling to Edmond, Oklahoma, or some other distant location, to see why a customer’s new four-wheel-drive Chevy pickup would not shift into four-wheel drive.

Case had been making agricultural machinery for 40 years. He had introduced one improved model after another to farmers all over the world—and he had warrantied them all to perform as advertised.

Word got around the county: Incredible as it seemed, J. I. Case himself was coming to repair a faulty thresher.

When Case arrived, a delegation of farmers had gathered to see this great man.

Case lost no time. Removing his coat and hat, he went to work on the contrary machine. After nearly an hour, he straightened up and gave orders to fire up the thresher. He fed the grain into it himself for a few minutes, then had it stopped. For the next four hours, Case worked, asking that the thresher be started up and stopped repeatedly as he tested it again and again.

Just before twilight, the company founder turned to the farmer.

“Have you,” he asked, “a sizable can of kerosene handy?”

“Yes,” said the farmer as he went wonderingly away to fetch it, while Case eyed the tormenting machine.

Once the kerosene was brought, the great man acted swiftly. Without a word, he doused the threshing machine from one end to the other with the entire can of kerosene. Then with deliberate calm, he struck a match and set the machine ablaze. The now darkened night sky was filled with the glaring flames of a brand new Case threshing machine burning to the ground.

While the flames were yet in full strength, demolishing this new machine, the founder and president of the J. I. Case Threshing Machine Company put on his coat and hat, bowed to the assembled farmers, and started the long trip back to Racine.

Mr. Case had left the farm with a heavy heart, but anger also filled him because a piece of unacceptable workmanship had been permitted to leave his factory—a piece of workmanship that was horrendous, yet with his very own name attached to it. To protect his name and his company’s name, the least he could do was to destroy the useless, offending machine where it stood.

Witnesses to the inferno marveled at a man who would rather sentence a brand new machine to total destruction and be done with it rather than have his good name marred by unacceptable performance.

Case put his name on the products his company manufactured, and he did not want his equipment to mar that good name. Nor did he want his own personal actions to leave a bad impression on his name.

Proverbs 22:1 says, “A good name is rather to be chosen than great riches, and loving favour rather than silver and gold.”

How about you? How important is it to you to maintain a good name? You, most likely, are not manufacturing and selling a product with your name on it, but we all do represent ourselves—and ultimately God. We must demonstrate a certain reputation of character.

Would you sacrifice your reputation by lying, cheating, stealing or taking unfair advantage to have more money or things? God’s Word says that having a good reputation is greater than having more gold or material gain.

Returning to the story about J. I. Case and his cantankerous threshing machine, Machines of Plenty by Stewart H. Holbrook reads: “Yet, what must have seemed a tragic affair to Case, turned out not so badly after all. The farmer, of course, got a new machine within 24 hours. Of much greater importance to the Case company, so, it turned out, was the effect of the dramatic destruction of the imperfect thresher. It is hardly too much to suppose that they reasoned they could not go wrong buying from a man who held such principles.”

Because Case demonstrated concern for both his good name and his company’s reputation to the point that he destroyed one of his new machines in front of a large audience, farmers knew they could put their trust in the quality of his equipment. Case Corporation still exists today, 172 years after it was founded. Most likely it has survived so long because its founder was so concerned about keeping his name untarnished.

How important is it to you to establish and protect your name, your character? Proverbs 10:7 says: “The reputation of the just is blessed: but the name of the wicked shall rot.”

When you consider this verse, ask yourself: How many men have you heard of who are named Judas? Or how many born after 1945 were named Adolf? There is nothing wrong with those names. It’s just that their past bearers have ruined them by their actions. Their very names are now despised.

We may not make an impact nationally or internationally either for good or bad by our actions, but locally and spiritually, we do have an impact. God is concerned that we develop a good name and then that we protect it.

There are a myriad of ways an individual can bring shame upon his or her name, and Satan certainly desires to ruin mankind—every single one of us. He wants you to slip up, he wants you to take a chance, he wants you to be careless, and he wants you to disregard your own reputation. He is more than happy when you have sullied your name, and then, for the rest of your life, you live with the guilt and shame of doing so.

Wrong choices can be appealing, but the results can be devastating. Seek wisdom from God. Study the book of Proverbs. Many of those Proverbs are directed to the young. Ask God for protection from the one who wants to see that your name is tarnished and stained.

The demonstration of Mr. Case destroying a piece of defective machinery which bore his name, no doubt, proved to the public that this man was not going to allow even a combination of metal and wood to sully his reputation. The farmers wanted to buy machinery from a man who displayed such strength of character.

All mankind has been created for the awesome purpose of being born into the God Family. That is the purpose of your physical creation. God expects every individual who has ever lived, all who are on this Earth right now, and all who will live in the future to develop His character. You have been sanctified; you can start to develop that character now, and while you are doing that, you will be actively protecting your name.

If you will develop your character—and respect the ideal of properly protecting your name—God will be so pleased with that He will bless you by giving you His very name (Revelation 3:12).