Jehoiakim, Tattooed King of Judah?
And other peculiarities about this unusual king of ‘abominations’
By Christopher Eames • June 21, 2022 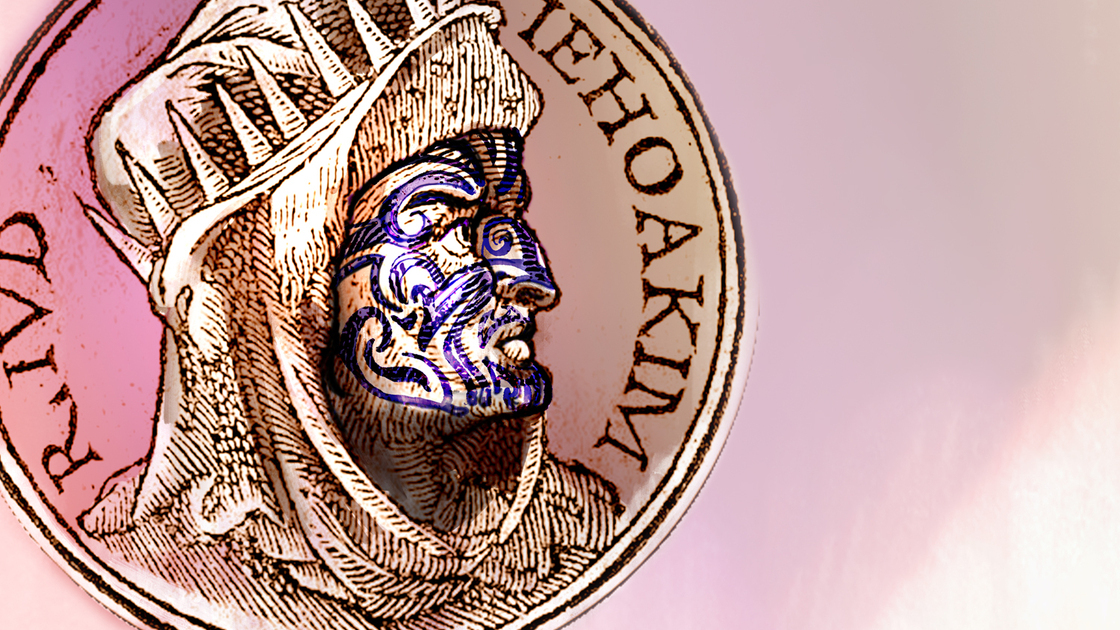 “Ye shall not make any cuttings in your flesh for the dead, nor print any marks upon you: I am the Lord” (Leviticus 19:28).

This is a fairly well-known scripture forbidding the practice of tattooing (most other English translations simply use the word “tattoo”). There are various explanations for this prohibition: the connection of tattooing to pagan cultures, concerns of purity and the manipulation of (and damage to) God’s creation, the overall physical harm involved (something many of these laws address). For example, the immune system and liver are constantly working to break down tattoo ink, which is why tattoos fade over time (albeit very slowly, due to the difficult-to-break-down ink particles, which today often include heavy metals).

With all this in mind, have you heard of the “tattooed” king of Judah? Maybe not, but there’s a fascinating hint at this in one Bible passage—among a wider, peculiar record of his life.

The Abominations of Jehoiakim

Throughout the biblical books of Kings and Chronicles, the Bible contains a brief summary at the end of each king’s life—i.e. “And the rest of the acts of king ______, are they not written in ______?” If the king were a sinful one (more often than not), there is occasionally a brief repeated summary of that at the end of his record.

But one king was especially singled out for his “abominations.”

Jehoiakim, son of Josiah, started out life with the name Eliakim. We get some clues about the character of this man right from the beginning of the short biblical biography. After his father was killed by the Egyptians, his younger brother, Jehoahaz, was made king—by “the people of the land” (2 Chronicles 36:1). This may have simply been based on the royal standing of the mother.

But it may also reflect how the elder Jehoiakim was perceived among the people for them to overlook him in favor of the younger Jehoahaz (as attested to by Jewish tradition). Synchronized with other confirmed chronological events at this time in archaeology and regional history, the coronation of Jehoahaz would have taken place about 609 b.c.

Jehoahaz was one of the shortest-reigning monarchs of Judah. After just three months, Egypt’s Pharaoh Necho came up against Jerusalem (probably on his return to Egypt from a northern campaign against the Babylonians—he had killed King Josiah three months earlier, en route). The pharaoh “condemned the land in an hundred talents of silver and a talent of gold,” carried Jehoahaz away to Egypt, setting up in his place Eliakim—from this point forward renamed Jehoiakim (verses 3-4).

”And Jehoiakim gave the silver and the gold to Pharaoh; but he taxed the land to give the money … he exacted the silver and the gold of the people of the land ….” (2 Kings 23:35). Aren’t “people of the land” ordinarily taxed to pay tribute? Why is it especially highlighted here? It seems something more sinister may have been at work—perhaps in modern terminology, a “stolen election.” Again, the Bible makes repeated distinctions between this king, Jehoiakim, and the people of the land. (Even the renaming of the king as “Jehoiakim,” which means “Yahweh establishes,” may have been a ploy to try to add a more legitimate gloss to what could have been an illegitimate king. Few biblical kings, after all, are recorded as having their name changed.)

Whatever the case, 2 Chronicles 36 contains the following brief summary of his reign: “Jehoiakim was twenty and five years old when he began to reign, and he reigned eleven years in Jerusalem: and he did that which was evil in the sight of the Lord his God. … Now the rest of the acts of Jehoiakim, and his abominations which he did, and that which was found in him, behold, they are written in the book of the kings of Israel and Judah ….” (verses 5 and 8).

Here we arrive at an especially peculiar phrase.

“Now the rest of the acts of Jehoiakim, and his abominations which he did, and that which was found in him …” (2 Chronicles 36:8). The last part of this sentence, ðîöà òìéå (in him), is unusual. It is not found anywhere else in the Bible, in any other summary of any monarch, in any other kind of setting. The word translated in is the Hebrew word al,òì, meaning on, about, upon (for example: “And He wrote on the tables”; Deuteronomy 10:4).

It could perhaps, as translated, figuratively mean evil found in him, in his heart. But the same could be said of other kings, such as the one often considered the “most wicked” of all, Manasseh. Why this distinction with Jehoiakim? Further, this turn of phrase is expressed elsewhere, such as 1 Samuel 25:28 (“evil has not been found in thee”), 1 Kings 1:52 (“if wickedness shall be found in him”), and Ezekiel 28:15 (“iniquity was found in thee”)­—but these all use a different, more common Hebrew word for in, which carries more of a sense of being within something, rather than the Hebrew word related to Jehoiakim, meaning “upon or on.” What could have been literally found on, or upon, Jehoiakim, separate and apart from all these other cases?

2 Chronicles 36:8 has led certain commentators throughout history to believe that Jehoiakim was actually tattooed. The famous 11th-century Jewish commentator Rashi (known for his pithy commentary on the Hebrew Bible), writes simply: “’Which was found on him’: A tattooed writing.”

The Geneva Study Bible commentary (1560) reads, citing similar tradition: “’Now the rest of the acts of Jehoiakim, and his abominations which he did, and that which was found in him’ …. He means superstitious marks which were found on his body when he was dead, which declared how deeply idolatry was rooted in his heart, seeing he bore the marks in his flesh.” Other commentators delve further into the what and where, regarding the tattooing of this king, based on the fact that it was “found” on him (although this, of course, starts to get extremely speculative. Needless to say, any tattooing would likely not have been like the opening picture—that is merely for illustration purposes).

Perhaps the wider overall contextual picture fits, too. Jehoiakim’s preference toward Egypt is evident. And while evidence of ancient tattooing in the Near East is extremely piecemeal, that which we do have comes out of Egypt. (It also serves as a reason for the command against it in Leviticus 19—Israel’s departure from a place where this was practiced.)

Whatever the answer, the verse “that which was found upon him” stands out as unique among the assessments of other kings of Israel and Judah.

And looking at the wider picture, the overall lack of favor for this overall “abominable” king is more than palpable. Certainly from God, relating to matters discussed in further detail in the book of Jeremiah—notably Jehoiakim’s persecution of the prophet and his slicing apart and burning of a scroll warning of divine judgment and destruction (Jeremiah 36). But also repeatedly indicated is his lack of favor even among the “people of the land.” Jewish tradition further holds that Jehoiakim indulged in incest, and that the tyrant was guilty against his own people of murder, rape and property seizure.

And his disfavor among the public is also shown through Jehoiakim’s manner of death, itself a veritable puzzle.

“Therefore thus said the Lord of Jehoiakim king of Judah: He shall have none to sit upon the throne of David: and his dead body shall be cast out in the day to the heat, and in the night to the frost” (Jeremiah 36:30). This was, in part, God’s condemnation of Jehoiakim following his burning of Jeremiah’s scroll of warning. Some confusion about Jehoiakim’s demise arises based on the account in 2 Chronicles 36: “Against him came up Nebuchadnezzar king of Babylon, and bound him in fetters, to carry him to Babylon. Nebuchadnezzar also carried of the vessels of the house of the Lord to Babylon, and put them in his temple at Babylon. Now the rest of the acts of Jehoiakim …” (verses 6-8). It appears here that Jehoiakim met his end by being carried off to Babylon, in contrast to verses in Jeremiah that describe the king’s dead body being dumped outside Jerusalem.

However, Daniel 1:1-2 add context—this assault by Nebuchadnezzar took place not even halfway into Jehoiakim’s reign. Further, 2 Chronicles 36 states that Jehoiakim was clapped in irons to be taken to Babylon—but only temple treasures are actually described as making it that far. It appears obvious that by promising to relinquish ties with Egypt and to pay tribute (by stripping the temple) to Babylon, Jehoiakim was allowed to return to Jerusalem, ruling for several more years. Those carried away with this captivity included Daniel and other princes. 2 Kings 24:1 says that following this incursion by Nebuchadnezzar, “Jehoiakim became his servant three years”—evidently, as was the case initially with Egypt, by another promise of tribute from the people in exchange for the king’s own benefit.

Following three years of servitude, Jehoiakim rebelled against Babylon. Verse 2 relates that Jehoiakim was then harangued by the combined attacks of mercenary forces made up of Babylonians, Syrians, Moabites and Ammonites. This passage likewise doesn’t mention his ultimate demise—but it relates to another that does. “And the Lord … sent them against Judah to destroy it, according to the word of the Lord, which he spoke by his servants the prophets. Surely at the commandment of the Lord came this upon Judah …” (verses 2-3). And what, exactly, did the “word of the Lord” say would happen to Jehoiakim?

In Antiquities of the Jews (10.6.1-3), first-century a.d. historian Josephus summarized Jehoiakim and how he ultimately met his fate: “[Jehoiakim] was of a wicked disposition, and ready to do mischief; nor was he either religious towards God, or good-natured towards men. … He was affrighted at [Nebuchadnezzar’s] threatening, and bought his peace with money, and brought the tribute he was ordered to bring for three years. … Now a little time afterwards, the king of Babylon made an expedition against Jehoiakim … he slew such as were in the flower of their age, and such as were of the greatest dignity, together with their king Jehoiakim, whom he commanded to be thrown before the walls, without any burial” (emphasis added).

Jehoiakim’s ultimate demise (circa 598 b.c.) paralleled, in a sense, that which he had done to the scroll of warning from God—cut up and thrown down into his fire pit. But there was to be no mourning by the people for this king. The Scriptures and Josephus give a good sense of that.

The biblical account of Jehoiakim’s life is certainly brief and stands witness to his sinful conduct—a continuation of royal and national rebellion that ultimately led to the fall of Judah and Jerusalem in the sixth century b.c. But oftentimes, there is more to the Scriptures than meets the eye, be it additional depth, nuance, numerics, advanced scientific details, even torture tactics—right down to the most seemingly innocuous of phrases: “that which was found on” Jehoiakim.