Does an Insect Work Harder Than You?
What God teaches us through His creation
By Micah Turgeon • March 31, 2022 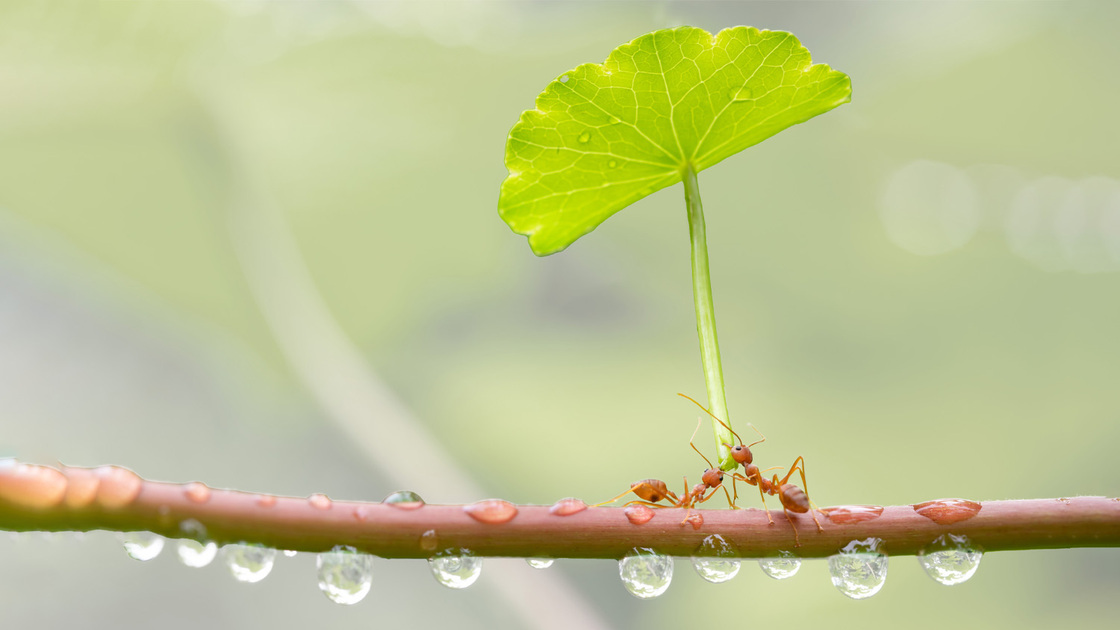 There are over 12,000 different species of them roaming around on Earth. Some scientists estimate there are up to 10 quadrillion of them on our planet in total (that’s a one with 16 zeros after it). In fact, they are the second-most prevalent creatures on Earth, behind only bacteria. So, no matter where you are, you can bet that there is a family of them close by. And you can also bet that you have probably stepped on their home a time or two, only to see them energetically begin rebuilding it.

This industrious little creature is the ant.

The different species of ants can differ dramatically from one another, but there are a few features that are common to all the different kinds. Ants have a caste system with three layers. At the top of the caste is the queen ant, who grows to be twice as large as all the other ants. Underneath her are the worker ants. All the worker ants are female. In fact, the only thing that determines whether a female ant becomes a queen or not is how much protein she eats. As larvae, the queen ants are provided with more food while all the other ants forage for food, take care of the queen, dig the nest, or fight off enemies.

At the bottom of the ant caste are male ants. While queens can sometimes live for decades and worker ants for about a year, male ants only live for little more than one week, and their sole purpose is to mate with the queen. Both male ants and young queen ants have wings and fly out of the nest to mate. Once the queen finds a new spot a few hundred feet or even a few miles away from her original nest, she starts a new colony. After mating, the male ants die quickly, and the queen ant sheds her wings and begins her career of having thousands of babies for the rest of her life.

One of the most important functions of an ant colony is gathering food. Have you ever observed hundreds of ants traveling along very specific trails on a tree or on the ground and wondered how they all knew where to go? The reason for these ant trails has to do with how ants communicate. When an individual ant finds a source of food, it secretes pheromones to mark the path. When other ants sense these pheromones with their antennae, they instinctively follow wherever the trail leads. Once the ants deplete the food source, the pheromones eventually fade and the process is repeated with new trails.

Ants have a few powers humans can only dream of, one of them being super strength. God created ants to be able to carry food several times heavier than their body weight. Few humans can lift anything even twice their bodyweight, let alone walk with it overhead for any distance. The strongest ants are called leafcutter ants, and they can carry leaves in their jaws that are 50 times heavier than themselves! Proportionately, they are one of the strongest organisms on the planet, even stronger than a gorilla for their size. If leafcutter ants were human-sized (which would be terrifying), they would be able to carry pickup trucks over their heads.

Some ants have super speed. Fire ants, one of the faster species, can travel nine body lengths in one second. That’s the same as a human running 30 miles per hour. (For perspective, when Usain Bolt set the world record for the 100-meter dash, he ran at a pace of just over 23 miles per hour.)

Although ants have a lot of special abilities, they need these to overcome certain disadvantages, such as their eyesight. Ants have compound eyes, which are a conglomerate of several dozen individual lenses attached to each other. This means their eyesight is very blurry and can really only detect light and shadows. For a small insect in the middle of an aggressive ant colony, its best chance of survival is to stay perfectly still.

Now you know a lot about ants in general, and that is more than enough to prove God’s handiwork behind their creation. But there are a few species in particular that reveal God’s genius even more.

Honeypot ants are truly unique. Like bees, honeypot ants store pre-digested food in their nests. But unlike bees storing their honey in a honeycomb, a small number of specialized worker ants use their bodies as storage containers. These specialized ants, called “repletes,” have distensible crops, a storage organ in the abdomen that swells with excess liquid, sometimes becoming as large as grapes. Too big to move, they hang onto the roofs of the nest. When the winter comes, the colony turns to the repletes for food: When a worker ant strokes the replete’s antennae, the replete regurgitates some of its excess food.

The army ants are such a destructive species that they are forced to move and set up camp in a new area every few days. When these ants find a place to rest, the worker ants interlock their bodies to form a temporary ant-nest around the queen and her eggs. These ants are famous for their massive jaws and potent stings that can take down larger insects such as scorpions. But their real strength is in their numbers. Army ant colonies can have as many as 20 million members. As they march toward their next home, these ants will conquer any obstacle that gets in their way, even using their body-locking skills to form bridges when needed. Scientists estimate that a swarm of army ants can kill 100,000 insects and other small creatures in a single day! (Thankfully, these ants aren’t very common in the U.S. and pose little threat to humans.)

Another powerful species is the bullet ant. Bullet ants are native to Central and South America, and build their nests in trees and shrubs as well as underground. These ants are notorious for having one of the most excruciatingly painful stings of any insect. The name bullet ant is no mistake: Their sting is said to be as painful as a gunshot wound! Worse yet, the pain reaches its peak 24 hours after getting stung! Thankfully, bullet ants are not aggressive.

Ants are living exhibitions of God’s creativity and love for variety. But beyond just their incredible design, they also teach us a valuable lesson. Solomon wrote, “Go to the ant, thou sluggard; consider her ways, and be wise. Which having no guide, overseer, or ruler, Provideth her meat in the summer, and gathereth her food in the harvest” (Proverbs 6:6-8).

All ants, whatever the species, have a tremendous work ethic. They will do whatever it takes to help their colonies, and however long their lifespan is or whatever their specific job is, they work diligently on it. Many of them spend their lives gathering food to provide for the colony or protecting the queen, who keeps the colony going. God designed them this way, in part, to teach us a lesson about hard work and making the most out of the time we have. Out of all their God-fashioned qualities, that lesson may be the most admirable thing we can learn from ants—even better than super strength.