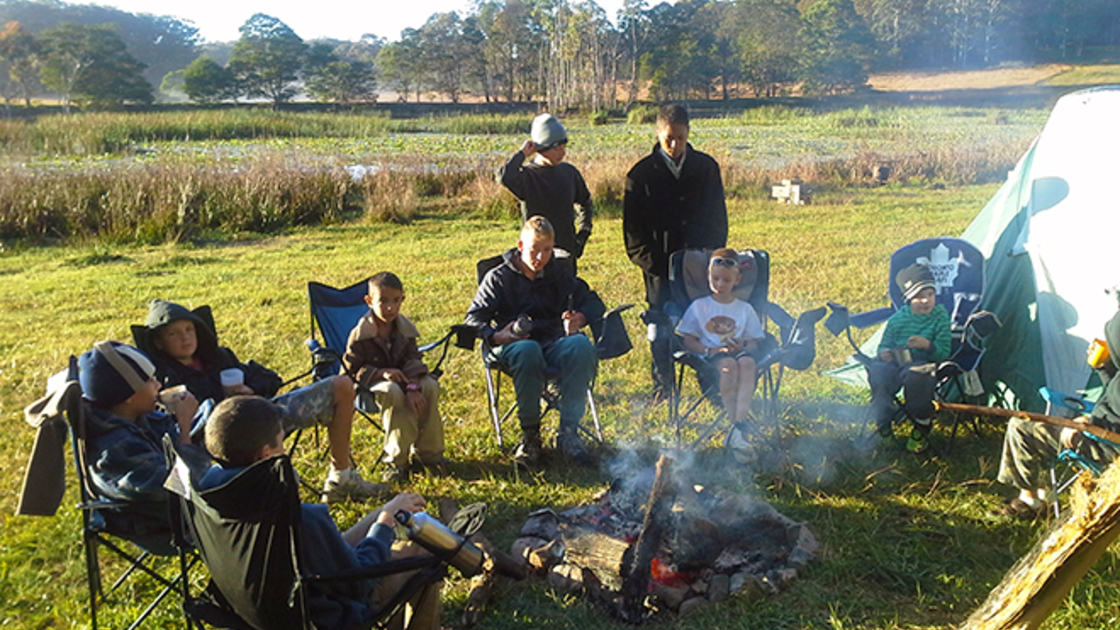 AUSTRALIA—On April 25-27, the Philadelphia Church of God Brisbane congregation held its first father-and-son campout. Thirty-two keen fathers and their sons, as young as 4, camped at the 2,000-acre property of Christine Bonner with the goal of building a stronger bond and developing basic outdoor skills.

After setting up camp, the group learned from deacon Kelvin Eames how to kill and dress a sheep, which then went on the spit to roast for dinner. Preaching Elder Aaron Hudson demonstrated how to build a shelter out of bush material. Then the fathers and sons split into three rotating groups to learn knife-sharpening, knot-tying and target-shooting.

“The target-shooting was a new experience for me, and I really enjoyed learning manly skills,” teen Elias Noe said. “It was really exciting.”

For Friday’s dinner, Mrs. Bonner cooked up a hearty meal of beef stroganoff and apple-rhubarb crumble with custard—all delivered down to the campsite on the back of her utility vehicle. That evening, some boys braved the night sleeping in their newly constructed shelters.

Following a cook-it-yourself breakfast on Saturday morning, Mr. Hudson led a group discussion focusing on leadership and the role of the male within the family. At mid-morning, the group listened to a recorded sermon by Pastor Wik Heerma, and after lunch they heard two recorded Marriage and Family lectures by Herbert W. Armstrong instructor Brian Davis.

“It was a pleasant way to spend the Sabbath in the beautiful outdoor surroundings of the Bonner property,” Philip Noe said. “It was well needed, and a fantastic way to spend time with the men of the congregation—being men.”

The men and boys spent the final hours of the Sabbath sitting around the campfire until the evening meal. Matthew Bullock showed the boys how to make traditional damper cooked over the fire. Once night had settled in, deacons Wayne Robson and Eames took groups of men and boys out spotlighting for rabbits on the back of Mrs. Bonner’s “ute.”

Sunday was spent engaging in a working bee for Mrs. Bonner, clearing a fence line and cutting down saplings around her house block. The afternoon ended with a spontaneous barbecue overlooking the Great Dividing Range from the veranda.

Eames summed up the feeling of most campers: “We spent close father-and-son time learning basic, practical skills and applying them, something you just can’t do in the cities. It was great!”