Go on the Offensive
What a Civil War general can teach us about spiritual victory
By Brad Macdonald • March 22, 2022 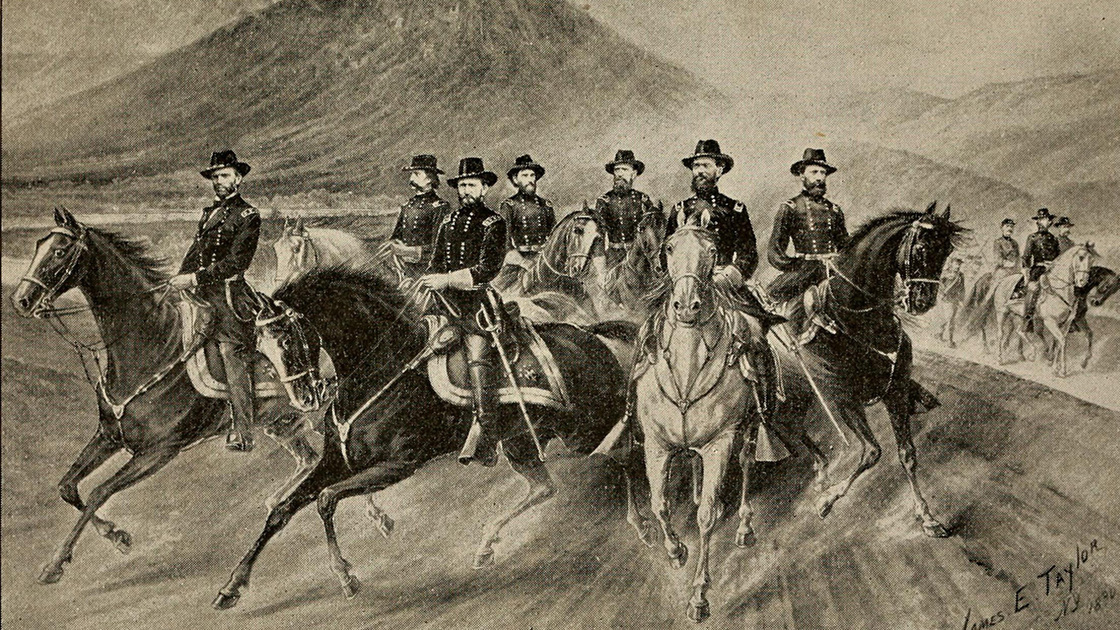 “The offensive is three or four times as hard as passively enduring from day to day. It therefore requires all possible help in early stages. Nothing is easier than to smother it in the cradle. Yet here perhaps lies safety.”

Those were the words of Winston Churchill, prime minister of Great Britain during World War ii. Offensive warfare truly is difficult, but it is the only way wars can be won. A nation may survive or reach a stalemate by being on the defensive, but the only way to completely conquer an enemy is by going on the offensive.

One American Civil War general provides a stellar example of how to use offensive warfare: William Tecumseh Sherman.

In September 1864, the Union army won an extremely important victory by capturing the Confederate city of Atlanta, Georgia, deep in southern territory. After taking Atlanta, most military leaders would have paused and consolidated their resources. They would have built huge defenses around the city and strengthened their supply lines. But not General Sherman. Instead, he planned an operation to capture Georgia’s capital city, Savannah, as quickly as possible to destroy the South’s capacity to continue fighting.

With 62,000 men under his command, Sherman’s focus was speed and destruction. During “Sherman’s march to the sea,” as it came to be known, his soldiers marched without a supply chain, so that they would not have to wait for provisions to catch up with them. Even more daunting, Sherman and his men were completely on their own for this campaign! There was virtually no contact with Washington, D.C., or with General in Chief Ulysses Grant. The Union soldiers had to forage for their own food, which meant they raided Confederate civilians’ farms. Not only did they take whatever they needed, they also left nothing behind, burning and demolishing each town they came across. When Sherman’s forces were done with a city, its infrastructure was utterly decimated and unusable. For example, Union soldiers used to heat up railway rails over a fire and then twist them around the trunk of a tree, rendering them useless (these were nicknamed “Sherman’s neckties”).

What Sherman was doing is known as the “scorched earth policy”: a military strategy that destroys anything and everything that the enemy could use against you. Many people say Sherman’s tactics were brutal and inhumane, but Sherman commanded his men not to harm innocent southerners. Some of his soldiers were even hanged for killing or violating Confederate civilians. Enemy soldiers, buildings, bridges, factories, railroads, crops and livestock were all fair game, but private civilians were strictly off-limits. Regarding the Confederate soldiers that they encountered, Sherman’s goal was not to kill as many enemy soldiers as possible, but rather to destroy their ability to fight back.

Not only did Sherman and his men destroy the Confederates’ physical ability for war, they also destroyed their will—their mental ability to fight back. When people heard that Sherman’s army was approaching, they would often surrender before the Union soldiers even arrived! If Sherman’s army had been weak-willed or passive, Confederate forces would have been more willing to fight, which would inevitably have led to more bloodshed. But Sherman’s fierce mentality destroyed the Confederates psychologically. His brand of offensive warfare was so intimidating that the enemy had already lost the battle in their minds!

Though God’s law prohibits murder, and war will be abolished in God’s future world, physical wars can teach us lessons about the spiritual battles we wage (Ephesians 6:12). Sherman’s march to the sea teaches us three such lessons:

1. Offensive warfare destroys the will of the enemy.

Perhaps the most important effect of offensive warfare is not what it accomplishes in physical battles, but what it does to the enemy’s psyche.

While on the warpath in Georgia, General Sherman wrote to Ulysses Grant about how the campaign was faring: “I observe that the enemy has some respect for my name, for they gave up Pocotaligo without a fight when they heard that the attacking force belonged to my army. I will try and keep up that feeling, which is a real power.” People in the South knew that if they were going to fight Sherman, they had better win, or they would lose everything—so they just preemptively surrendered! Sherman’s army no longer had to even engage in conflict, because the enemy just gave up! This made fighting the war much easier for the North.

In a letter to Chief of Staff Henry W. Halleck, Sherman wrote, “I think the time has come now when we should attempt the boldest moves, and my experience is that they are easier of execution than more timid ones, because the enemy is disconcerted by them ….” Sherman recognized that there is a real mental advantage in going on the offensive.

Did you know that you can actually claim this mental advantage over Satan the devil? James 4:7 says, “Submit yourselves therefore to God. Resist the devil, and he will flee from you.” In our spiritual war, we go on the offensive against Satan by submitting to God and keeping His commandments. If the devil recognizes that he has no chance against us, he is quick to give up! Gerald Flurry writes in The Epistle of James: “If you submit to God, Satan will flee—because he knows the power of God! But he also knows the weakness of humans. With his cunning, he has taken most of God’s own people captive! But you have the power to make the devil flee.” Never forget that! You won’t personally destroy Satan’s will, but he will leave you alone and instead will prey on those who walk on the edge. He will flee from those who rely on God.

Jesus Christ also practiced offensive warfare when He had His titanic battle with the devil in Matthew 4. The devil attacked Christ by misapplying Scripture. But Christ didn’t sit back and reason with the devil—He started quoting Scripture right back at Satan! He went on the offensive (verses 4, 7, 10). What was the result? “Then the devil leaveth him ….” (verse 11). Satan knew he had no chance to win, so he just gave up!

If you stay on the defensive, the enemy will make you want to quit. But if you go on the offensive, you will make the enemy want to quit! That’s what Sherman’s army did to the South, and that’s what we can do when Satan tempts us. All we have to do is submit to God as James 4:7 commands.

2. A successful campaign is free of anything that might slow it down.

One of the things that made Sherman’s march a success was its complete focus on the end goal of conquering Savannah. Sherman cut off all distractions and dead weight that would have slowed down his men. He didn’t worry about finding food or ammunition; he was concerned only with reaching Savannah.

During the march, Sherman’s army encountered many slaves who wanted to join the army and be taken to the North. Sherman tried to be gracious toward them, but he told his men not to pick up anyone. Sherman understood that even though letting refugees tag along would have been kind, it would have slowed down the campaign. Surely it must have hurt to make such a tough decision, but Sherman did it for an important reason. Sherman knew how crucial his campaign was, and if he had gotten distracted or weighed down, it had a greater chance of failure. What would have happened to all those refugees if they tagged along with the army, but the army was defeated? Sherman knew that winning the war was for the greater good.

In our battle, there can be many things that may not necessarily be harmful to us, but they can still slow us down if we’re not careful. Proper entertainment, spending time with friends or playing sports are all good things, but if they get in the way of your relationship with God, they can be an encumbrance! Christ said we have to love God more than anything else, even our physical family (Luke 14:26). If we are unwilling to give up certain things to follow God, then we won’t win our spiritual war. The Apostle Paul wrote that we need to “lay aside every weight, and the sin which doth so easily beset us, and let us run with patience the race that is set before us” (Hebrews 12:1). If we have too many ties to the world, it will slow us down.

Like Sherman’s army, we must be ruthless about cutting out distractions. Everything we do must help us achieve our goal. If any pursuit does not lead to the objective, it must be eliminated.

3. Be willing to wage TOTAL war.

Although Sherman wanted to capture Savannah as soon as he could, speed was not his only focus. Sherman’s men were also methodical and deliberate in their march. “From Atlanta, Sherman’s 62,000 men came into the fat fields of Georgia … like locusts devouring a land,” wrote biographer Lloyd Lewis in his book Sherman: Fighting Prophet. “They saw that it was not for speed that they had been ordered to travel lightly. Instead of the scheduled fifteen miles a day they were making ten—half the rate at which Sherman had trained them to march. They understood that the reduction had been made to enable them to waste the resources of the regions through which they walked.”

Sherman’s army wanted to destroy the South as quickly as possible, but they also wanted to make sure their enemy was completely incapacitated. They left most people alive and untouched, but the infrastructure was completely and utterly obliterated. It may have taken more time, but it eliminated any chance for their enemy to recover and attack again.

If Sherman had been content with a partial victory, the Georgia Confederates would never have been fully conquered. In the same way, we have to wholly conquer our sins and weakness. Sometimes we have to take the time and energy to completely besiege a problem. Mr. Flurry writes in How to Be an Overcomer, “A siege is a military blockade of a city or a fortified place intended to compel it to surrender. It is a persistent attack. To lay siege means to pursue diligently or persistently. … Lay siege on [a problem]—go right at the heart of it with everything you can muster! Destroy its will! Decimate your old man’s will to rise back up—and you will conquer it. That is how we can win battles against our serious problems.”

If we just try to hide or run from a problem, it might rear its ugly head later on. If you have a weakness, do everything in your power to destroy it! Don’t be afraid to take extreme action. “And if thy right hand offend thee, cut it off, and cast it from thee: for it is profitable for thee that one of thy members should perish, and not that thy whole body should be cast into hell” (Matthew 5:30). If something is obstructing your relationship with God, destroy it! Be willing to wage total war.

In spiritual warfare, we must remember Sherman’s example. Work daily to destroy the will of the enemy. Eliminate anything that is slowing you down. Don’t just put it in a drawer or give it to your parents—get rid of it! Forage daily for God’s spiritual food and then be willing to wage total war. If you submit to God and wage this kind of offensive warfare against the devil, he will flee from you!