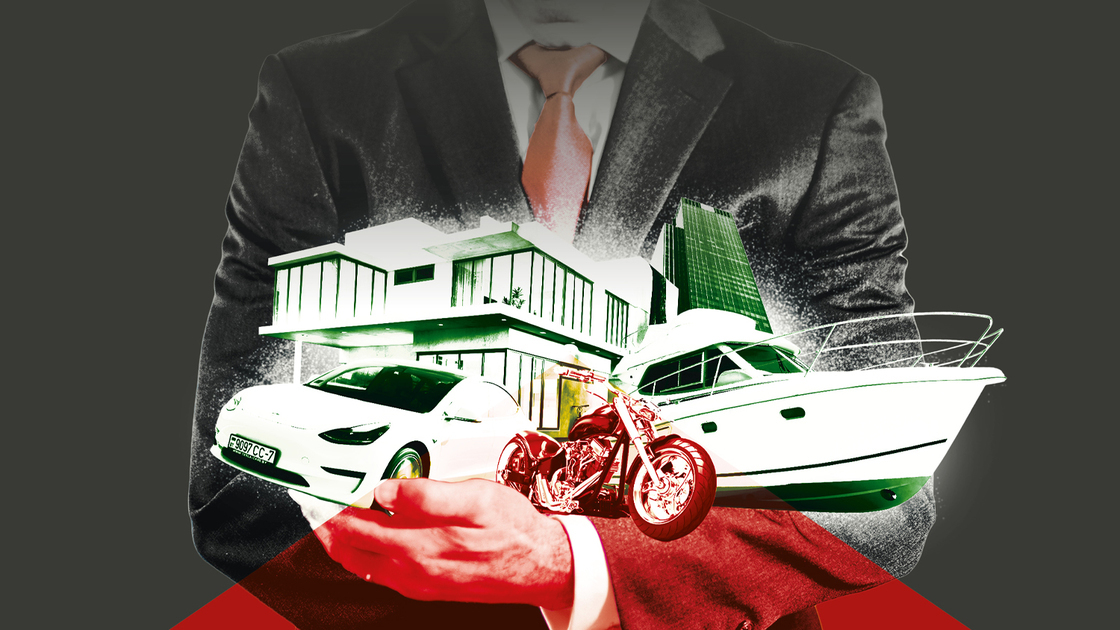 King Solomon had it all. In Ecclesiastes 2:1-10, he wrote about the materialistic and even hedonistic lifestyle that he lived for a time. He owned houses, vineyards, gardens, livestock, silver and gold. He drank much wine and had many “servants and maidens.” He maintained several stimulating intellectual pursuits. He accumulated musical instruments and surrounded himself with men and women who played and sang beautifully.

This was a man living a life saturated by worldly goods and pleasures. It was the kind of life many would think is heaven on Earth! But here is what Solomon finally realized: “Then I looked on all the works that my hands had wrought, and on the labour that I had laboured to do: and, behold, all was vanity …” (verse 11).

As a teen living in the 21st century, you have access to far more media, technology, fashion trends and physical goods than even Solomon did. You are constantly bombarded by ads telling you happiness can be purchased. For a time, a materialistic life can give you the feeling of being whole and healthy, but Solomon realized that it left him empty. It will do the same for each of us. Without God in the picture, matter doesn’t matter.

In Mystery of the Ages, Herbert W. Armstrong wrote this about today’s world: “You live in a world seemingly far advanced in science, technology, higher education and diffusion of knowledge. People think it’s a world of great progress. We send men to cavort about on the moon and return them safely back to Earth. Unmanned spacecraft land on Mars and send close-up photographs of the Martian surface back to Earth. Other unmanned spacecraft fly close to Jupiter and send back astonishing pictures of Jupiter and the rings of Saturn. Surgeons transplant human hearts and other organs.

“It’s a magic, entrancing push-button world where work is done largely by machines. It’s the glamour dreamworld of the three ‘L’s—leisure, luxury and license.

“But paradoxically, it’s also a world of ignorance! Even the educated know not how to solve their problems and the world’s evils. They know not the way of peace or the true values of life!”

As time goes on, mankind keeps developing more entertainment, technology and wealth than Mr. Armstrong or Solomon could have imagined. Yet this is all just a facade. Humans now face extinction as this materialistic lifestyle has created thousands of problems while solving none. Let’s learn what the Bible has to say about the pitfalls as well as the solution to materialism.

If anything is more important to us than God, then that interferes with us loving God with our all. We are, in essence, worshiping that thing, becoming servants to it. Materialism also ties directly to the Tenth Commandment, which forbids coveting (Exodus 20:17). Coveting physical things or impure human relationships can cause us to devote our time and energies to those things or people rather than to God. This violates the First Commandment—“Thou shalt have no other gods before me” (verse 3)—and it becomes a vicious cycle.

Materialism boils down to a competition between our carnal desires and God with His righteous desires. Prioritizing material things puts us and our desires in direct competition with God, and He is jealous! He will not have it!

1. Did Jesus Christ foresee a faithless world in these last days? Luke 18:8. What did Peter say would signal the last days? 2 Peter 3:3-4.

Materialism is contrary to faith. Materialistic people have little hope of building meaningful faith until their thinking fundamentally changes. It saps spiritual power, as Mr. Armstrong wrote in The Plain Truth About Healing. We seem to lack the power the first-century apostles had, he wrote, “not because God denies us that power, but because we are so close to a modern, materialistic world—our minds are so filled with the material interests of this life; our minds and our hearts are so far from God; we are so out of touch with Him through lack of enough time spent in the study of His Word and lack of enough of the right kind of surrendered, submissive, earnest and heartrending prayer—and, consequently, because we are not filled with the Holy Spirit which affords us the power of God!”

Materialism is the reason modern Christians lack the power to do great things for God. Mr. Armstrong listed no other reason. That is what causes us to lose contact with our Creator. If we were not so focused on material concerns, we could have faith and power like the apostles of the first century!

1. Does self-reliance cause our hearts to depart from God? Jeremiah 17:5.

In a sense, Eve partook of the tree of knowledge of good and evil before she actually ate the tree’s fruit. Adam too. This is because they had already reasoned around God’s instructions and trusted in themselves. Once they began relying on their own reasoning, eating from the wrong tree was inevitable.

How often do we use the same criteria for decisions, relying on our human reasoning? Prioritizing our feelings is a common form of materialism today. I think this would be good for me, we may reason. We often hear, “If it feels right, do it!” Meanwhile, if we’re too tired to pray or study or don’t feel like it, we reason that we should just skip it. It’s better to get more sleep or do some other pressing task than do what God commands. Too often, we act on what we think we should do and ignore what God’s law commands us to do.

God makes clear that trusting in ourselves and doing what feels right is a wicked way to live that will alienate us from Him. If we rely on any man or woman, including ourselves, we are departing from God—and we are eating from the wrong tree and bringing curses on ourselves.

Selfishness naturally leads to materialism. Most people are only thinking about themselves and what they want. “[L]et us eat and drink; for to morrow we die,” as the Apostle Paul wrote, illustrating the selfish and shortsighted view held by people who do not believe in a spiritual world or an afterlife.

Mr. Armstrong was definitive about it: “Self-love is the very essence of sin.” That is how he put it in his Jan. 9, 1982, sermon, “What Constitutes Sin?” That is a lightning-bolt statement from God’s apostle, based on a penetrating understanding of God’s law.

It is so common today not to think of tomorrow. Fast food, instantly available movies and apps, and endless cheap goods can easily feed materialism. People think prioritizing themselves will bring happiness. But those who live selfishly and only for the day are not content. It has become common for people to live deeply in debt with credit cards, car payments, student loans, even installment plans on a number of normal household items! A great deal of this debt is because people want more things—they want everything they can afford and much more.

Because you are probably not now responsible for paying all your bills, this may be hard to relate to. But remember this instruction as you begin to assume more responsibilities. Never allow money troubles to overwhelm your thinking. Trust God to provide.

Those who only try to please themselves are living contrary to God’s way of love. Mr. Armstrong once defined love as “an unselfish outgoing concern for the good and welfare of the one loved.” Materialistic people focus their love on themselves and the things belonging to them.

People whose main goal in life is merely to acquire possessions are clearly ungrateful for the things they do have. If they were grateful, they wouldn’t constantly lust for more. It is often those with the least who are the most thankful for what they do have. While it is not necessarily wrong to buy new things occasionally, we must remember to thank God for the things He’s already given us.

4. What happened to the men Paul talked about in Romans 1 because of their lack of gratitude and reverence to God? Verse 21.

In Great Again, Gerald Flurry writes about how the United States, Britain and Israel have a history with God, “yet they are totally ungrateful! Ingratitude is perhaps their greatest sin!” That is a strong statement.

Ingratitude is everywhere. A focus on material things leaves us always wanting more, and this lustful attitude makes our ingratitude even worse. Paul wrote, “Let your conversation be without covetousness; and be content with such things as ye have: for he hath said, I will never leave thee, nor forsake thee” (Hebrew 13:5).

The Antidote to Materialism

1. How will materialism actually make one view life? Ecclesiastes 2:17-18.

Solomon had everything money could buy, but money cannot buy happiness. In fact, acquiring so many material things became a curse to Solomon. Despite being unfathomably rich, Solomon had a lot of regrets and realized a materialistic lifestyle is worthless!

Materialism is pervasive. And the only real antidote for it is vision—real, spiritual vision.

In speaking about the three dimensions in life—the within, the around and the above—Mr. Armstrong wrote that most people only use the first two. “Looking into the within is like looking into a well and finding it has gone dry,” he explained. “Relying on the within, they become self-centered. Their concern is primarily for self. So they become selfish” (Good News, May 1983). This includes greed, measuring success in terms of material accumulation, and the spirit of competition, which makes them unconcerned about others, even jealous and suspicious.

“Then, of course, there is the pull of human nature to conform—to belong. So the dimension of the around fills a big part of their lives,” he continued. “But those around them are self-centered too, trying to get the best of them in every deal. They, too, center their affections on material acquisition. They constitute an unhappy world. They are bent on getting, and too often you find they are jealous or envious or resentful toward you. You find that their concern is for themselves, rather than for your welfare or happiness. You trust them, and too often find them untrustworthy.

“There’s not much in the way of resources to be found in the around, but many disillusioning disappointments.”

By failing to tap into the third dimension—the above—most of humanity has been missing the greatest resources and benefits! Do you have the vision to see that all-important above dimension?

As Christians, God commands that we avoid entangling ourselves with the affairs of this life. Instead, we fixate our minds on the mission God has given us: finishing His Work!

In The Book of Hebrews: What Jesus Christ Is Doing Today, Mr. Flurry addresses this theme and ties it to our faith. “It is only through faith that we can have the spiritual power, godly confidence and boldness we need. Yet too much of the time, we are so tapped into this materialistic world. That can destroy our faith! We must guard against that! To build strong faith, we must come out of this world!”

If we have spiritual vision and see God’s plan clearly, then we won’t be caught up in the things of this world. To keep yourself safe from the dangers of materialism, develop your relationship with God through prayer, Bible study and meditation on the things above. Work to grasp God’s vision in your mind, and your spiritual and physical life will be full of fulfillment and hope!