Be Pleasant
Advice from the oldest woman in space
By Christina Dattolo • Nov. 4, 2021 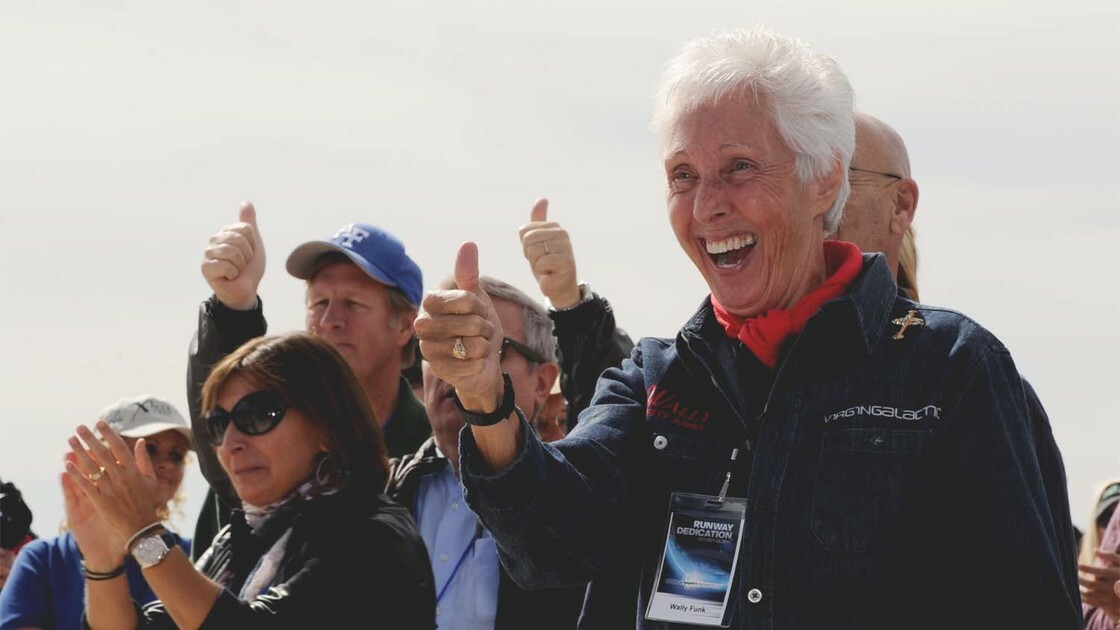 Could you stay in a sensory deprivation tank for over 10 hours, remaining completely motionless? Could you be rejected for a position at nasa and yet still become one of under 600 people who have ever been in space? Can you have books written about you, documentaries made about you, have a thousand-dollar scholarship in your name, conduct countless interviews and seminars, and be an inspiration to people in your field for generations? Can you keep setting and reaching even higher goals?

According to Mary Wallace “Wally” Funk, yes; yes, you can.

I recently had the privilege of hearing Wally Funk, an 82-year-old woman who just went to space, speak at her alma mater of Oklahoma State University. Gathered with about 300 others in the McKnight Center for the Performing Arts, I was immediately charmed by Wally’s limitless energy and vibrant smile. From the moment she bounded onto the stage, she commanded everyone’s attention. We laughed as she squinted her hazel eyes to see everyone, demanded that the house lights be raised, and then delightedly whipped out a bright red camera to start snapping photos of us.

On July 20, Wally Funk became the oldest person to travel to space when she went up on Blue Origin’s first New Shepard flight for 10 minutes and 18 seconds. (The record has since been broken by 90-year-old Star Trek star William Shatner, who went up with Blue Origin on October 12.) But Wally Funk was not selected at random. She has had an illustrious career in space that started as young as eight years old.

Wally told us her first memory is of tinkering with a plane when she was two. By the time she was eight, her family knew she would be a pilot because she tried to fly by jumping off her dad’s barn roof into a pile of hay and said she needed a propeller attached to her nose to go farther!

An expert marksman at 14, a college student at 16, a civilian flight instructor at 20, and one of 13 women on the privately funded space program “Mercury 13” at 23, Wally has never done anything half-heartedly. When she applied to work at nasa in the 1970s and was rejected because she didn’t have an engineering degree, she immediately went back to school to get one. When she was rejected there as well, she educated herself in the basics of engineering and continued teaching other pilots, becoming the chief instructor at five different schools of aviation. To date, she has trained nearly 4,000 pilots.

Wally had always dreamed of going to space. When she went up with Jeff Bezos on his first civilian spaceflight, she achieved that goal. Yet she isn’t done: Her next goal is to visit the International Space Station. And, according to her, any one of us could do what she has done if we wanted to. How?

You may laugh at that—most of the audience at the McKnight Center for the Performing Arts certainly did. But Wally was very serious. She was asked the question: “If you could give any young person chasing their dreams one piece of advice, what would it be?” Wally paused a moment to think, studying the crowd. Finally, with the same forcefulness and energy that backed all of her words, she said emphatically: “You can’t let your mind run amuck. No cuss words, no smoking, no drinking, nothing like that—be pleasant.” When a few people chuckled dismissively, Wally wagged her finger in disapproval and continued, “You laugh, but I’m serious.” She went on to tell us that she writes thank you cards or calls every person who has done something nice for her—and that she spends a lot of her time writing cards or talking on the phone because she has been treated very well in her life.

Throughout the evening, I was struck by how often Wally returned to this point of a pleasant, cheerful, happy perspective in life. When she was training for her mission into space, she had to remain in a sensory deprivation tank for 10 hours and 35 minutes. She asked us if we thought we could have done that. I caught myself, along with several others, shaking my head no. This elicited a sharp rebuke from Wally: “Don’t you dare shake your head at me or tell me you can’t do what I did! Yes, you can! As much as you want to achieve something, that’s how much you’ll do to get it.” Wally broke the record that day—she was in the sensory deprivation tank longer than any of the other trainees—and she attributes her success to her upbringing: “When I grew up, you said ‘please’ and ‘thank you.’ You didn’t put your elbows on the dinner table. You said ‘yes sir’ and ‘yes ma’am.’ That’s how I was raised.”

When Wally finished, I was able to shake her hand before we left. She leaned over the edge of the stage, clasping everyone’s hands warmly in her own and smiling broadly. She asked me for my name, held my hands tight, and thanked me personally for coming to hear her speak. Not once did the smile leave her face. We saw her do the same thing for every guest—personally thanking them, as she was raised to do.

Wally’s pleasant and wholesome outlook on life is increasingly rare in today’s world—the dubious reaction from the crowd was just one small example of that. But whether she knows it or not, Wally’s happiness is based on a scriptural principle. Proverbs 17:22 says, “A merry heart doeth good like a medicine: but a broken spirit drieth the bones.” Wally could have gotten negative about all the times she was rejected from nasa (she applied several times), but she never let that stop her. She never gave up on her goals, even in her old age. She has always kept that simple, pleasant hospitality she was taught. Even now, she hasn’t stopped setting goals or being thankful for her opportunities.

Wally is a living example of how much easier life’s challenges can be to handle if you just focus on being kind to others. She didn’t seem like the type to ever be jaded or bitter about anything. Instead, she chose to hold tight to the wholesome hospitality of a bygone era and be pleasant in her dealings with everyone. That pleasant attitude has served her well in life, and I’m confident it will continue to.

If something does not quite go according to plan—if your first attempt at something isn’t successful—if you are looking for how to reach a higher goal—consider the example of the oldest woman to ever travel to space. Keep your mind focused on others. Be pleasant!