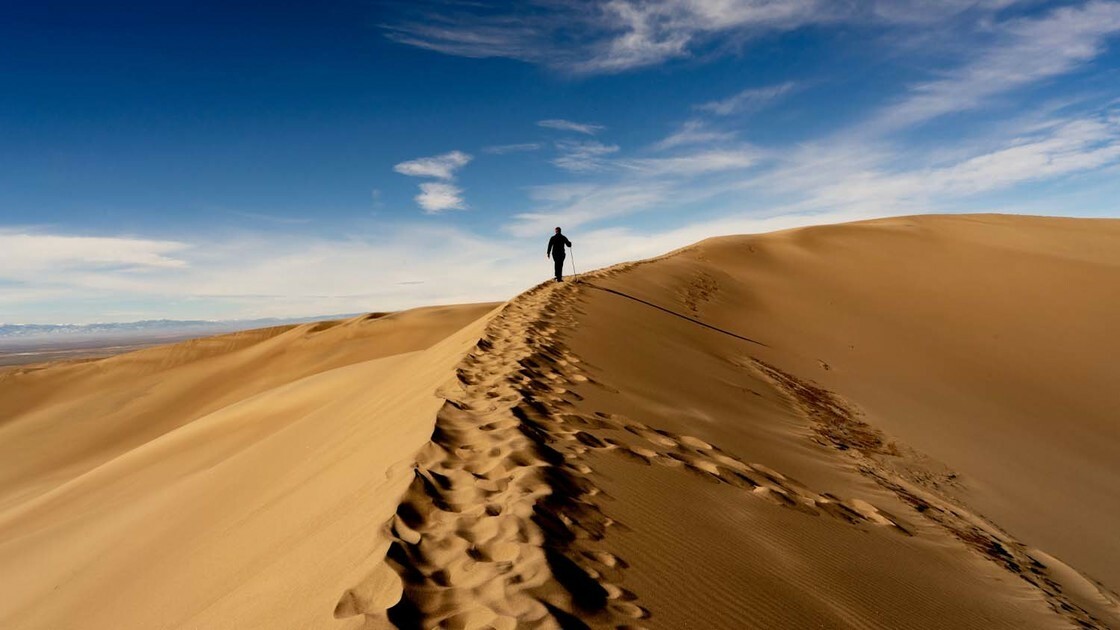 A manly trip—that’s the reason two of my friends and I traveled to Colorado for a vacation this summer. Jude, Jeremiah and I were pumped to be camping in the middle of a dune field with nothing to do but eat, talk and sleep. After a nine-hour road trip, we arrived at the Great Sand Dunes National Park, where we would spend two days and two nights out in the middle of nothing but several square miles of sand.

We grabbed our backpacks out of the trunk of my 2007 Toyota Corolla (which I was very proud of for making it through the mountainous drive), and began our hike to find a suitable campsite. Since we were hiking through a dune field, we had to carry in our own water source, so we also lugged a five-gallon water cooler jug along with us. More about this later.

The hike was long and laborious for several reasons. First of all, the elevation of the park was close to 15,000 feet above sea level. This meant that the air was much thinner than it is in Oklahoma. This can cause headaches, shortness of breath and even nausea. Another reason the hike was tougher than normal was because the sand would sink about 6 inches every time we took a step. All of this plus having to carry the aforementioned water jug. Weighing about 40 pounds, the jug roughly equaled the weight of our backpacks, doubling the load. So, we carried double the weight, with no firm footing, and also struggling to breathe.

As a result, we made camp a little closer to the visitor area than we were anticipating. We set up our tent, cooked our ramen noodles, read some books, found a large stick and named it “Gwen,” tried our hands at whittling knives and spoons, exchanged words about the tiring day we had, and let out many long sighs of exhaustion. As we dozed off to sleep, everything was dandy.

The next morning, we woke up feeling confident and decided to tear down camp to venture out a little further into the dune field. After a 45-minute hike, the three of us plus Gwen set up camp in a new spot—out of view of any other humans. Up to this point, all was still functioning according to plan, but things were about to get interesting.

We were running low on water and as the day went on, we realized we wouldn’t have enough to drink or to cook our dinners. We decided to make what we hoped would be a short water trip. We chose a route that we hadn’t traveled to that point, but from our vantage point, it looked like it would be the shortest and least strenuous path. In reality, it was probably harder than all the others we hiked.

You see, sand dunes are like trials—they seem very small and insignificant when you observe them from afar, but when you actually go through them, you realize how tough they are. When we reached the top of a new dune, we invariably discovered a deep chasm on the other side that we couldn’t see before. This turned what we thought was going to be an hour trip into a two-and-a-half-hour trip.

This is important because of what followed immediately after we returned to our campsite. As we were about 15 minutes away from our campsite with a refilled water jug, we began to feel several sporadic raindrops. The wind picked up and rods of lightning struck in the mountains to the north.

Another feature of sand dunes is that they all look the same. This makes trying to find a specific area in the middle of a dune field incredibly difficult. Several times we had to stop and examine to estimate where we left all our stuff. We were in the valley between two dunes, and agreed that our campsite was on the west side. As we took our first steps to this location, Jude spotted his sleeping pad out of the corner of his eye, which was to the east. Had he not seen it, our hike would have lasted another 20 minutes. With a storm approaching us, we didn’t have a minute to spare. Within 30 seconds of reaching camp, the storm got stronger and the raindrops transformed into a downpour. We furiously threw all of our gear and food inside the tent and hid for cover. If we had gone west, all our gear would have gotten wet and a lot of it would have blown away, not to mention that the three of us would have had a good chance of getting struck by lightning while hiking.

For over an hour, the sandstorm raged. It was unlike anything any of us had ever seen. The winds must have been close to 50 miles per hour. If we weren’t in the tent, it would have surely blown away. As it were, we held down the corners while the height of our tent went from six feet to three feet. All three of us were shivering, thinking about how each of us should have written a last will and testament before we went out there. We exchanged embarrassing stories that we had never told anyone else. We thought we were going to die, but we knew in the back of our minds that God was going to protect us. When we weren’t talking, we prayed. We must have asked 20 silent prayers between us. But the storm would not let up until God wanted it to (If you want a biblical comparison to what we felt like, read Jonah 1. We too were “exceedingly afraid.”)

But eventually, the storm did pass. As we sheepishly stepped outside the tent, we breathed a sigh of relief that we were all still intact—and so was the tent! All three of us glanced at each other, tacitly acknowledging the miraculous protection we just received. After debating whether or not to leave for home or stay another night, we agreed to move camp closer to the parking area in case another storm hit. Thankfully, God spared us from any more storms.

As I look back on that trip, I view it as arguably the most fun trip I’ve ever been on. Despite the adversity of a life-threatening squall or hauling heavy packs and water up and down dozens of dunes, we loved it. In fact, it was more fun because it was hard. If it were easy, there would have been no sense of accomplishment that came when reaching the crest of the highest dune and feeling on top of the world. I would have never known quite the same feeling of relief after we survived the sandstorm. I would have never witnessed the miracle of God’s protection and His timing if I’d just stayed inside.

I learned a lot of things from this adventure. I learned humility. It’s very easy to be arrogant and think you’re a lot stronger than you are when you have a cozy house and all the luxuries of everyday life. When those things are stripped away, you see how vulnerable you are to something as routine as the weather. Camping does a good job of reminding you your place in the world.

Another thing I learned is that you can have fun with a simple life. I mentioned Gwen earlier, but that stick became one of our greatest sources of amusement. We used it for building a shelter, pole-vaulting, playing horseshoes, whittling, jousting, etc. When we weren’t doing any of that, we read, sand-boarded and just talked. I don’t remember being bored at all the entire time. Despite what this world wants you to think, you can have fun without any screens or a lot of money.

I wouldn’t trade those few days in the sand for the world. If you get the chance to travel, consider choosing the path less traveled. Aim for adventure. Get out into nature and see God face to face through His creation. Sure, it may be a little scary sometimes, but don’t let that make you miss out on a life-changing adventure. Obviously, you don’t want to tempt God, so make sure you’re thoroughly prepared with the right gear and try to go with an experienced partner if you’ve never done it before. Do your part to stay safe and God will do His part.

I’ve learned a lot from camping. What will you learn? Who knows, you might end up making a friend out of a stick.