Falling Off Rainbow
The painful consequences of ignoring instructions
By Christina Dattolo • June 17, 2021 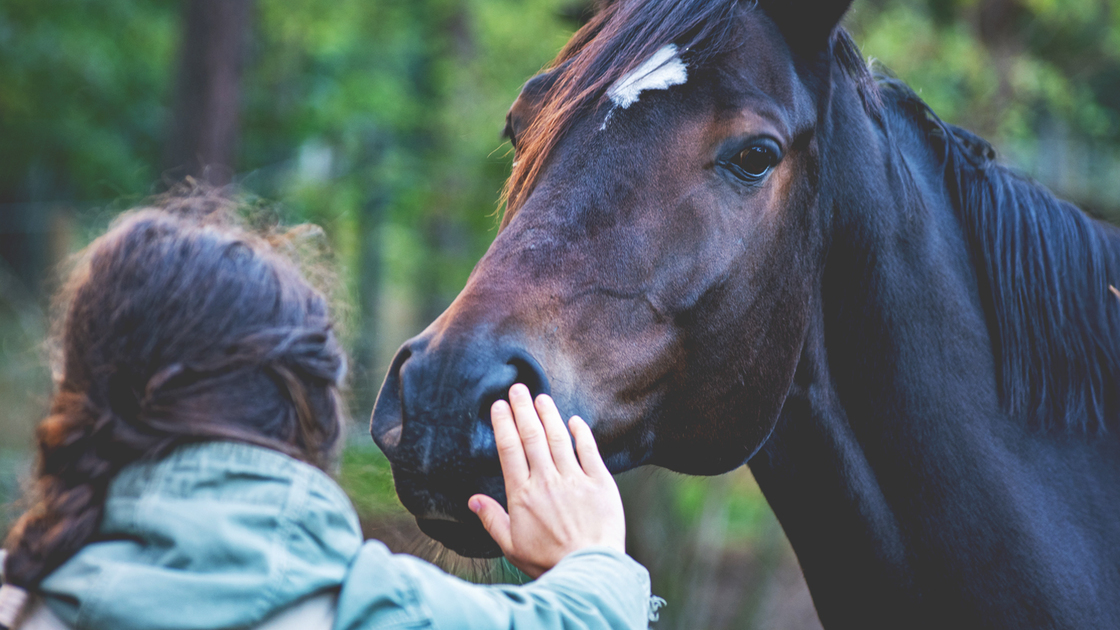 I fitted the helmet snugly over my unruly curls, straining to fasten the strap, then hoisted the saddle and blanket in my arms and walked over to Rainbow, the black mare I would be riding. “Hey girl,” I cooed affectionately. Her ears swiveled at the familiar sound of my voice, and she snorted in response.

Horseback riding camp was one of my favorite summer activities. This year, as one of the older and more experienced campers at Rocky Ridge Ranch (I was 12 at the time), I was allowed to help with brushing, watering and feeding the horses, as well as saddling and de-saddling them. But best of all, I had my pick of the horses when we went out for our daily trail ride with some of the first-time campers.

Rainbow was the first horse I had ridden at Rocky Ridge. Her coat was a rich ebony that shimmered in the light—hence her name—and she had a crooked white diamond hidden under her forelock. She was about 14 hands high from her hoof to her withers (the highest point of her shoulder), which is roughly 4 feet, 8 inches tall. She was one of the gentler mounts, but she had spirit. She and I had a mutual understanding, and she always seemed to sympathize with me as I talked to her, which I did now as I tightened the saddle cinch. I told her how much I wanted to gallop, and she brayed enthusiastically.

Only one problem: I was stuck with all these younger campers who weren’t as experienced, and our riding instructor wouldn’t let us gallop. I had always wanted to let Rainbow run free, unrestrained by the bridle or the bit. Yet the most I had ever been allowed to do was a slight trot or a canter on the trail.

Rainbow seemed to share my longing to run. I could feel her muscles rippling under my hand, and she tossed her head excitedly, prancing playfully as I led her out of the stable into the blinding sunlight.

Wistful thoughts of galloping through the tall grass were still racing through my head as I mounted Rainbow and mechanically filed behind the other riders into the corral, where we warmed the horses up with an easy trot around the perimeter a few times, practicing stopping and turning them. Rainbow was so well trained and used to me that I almost didn’t have to do anything. Just the slightest tug on the reins or tap of my heels, and she knew exactly where I wanted her to go and what I wanted her to do.

I smiled as I felt her excitement mirroring mine. Poor girl … she probably never gets to run. I wonder … I distantly listened to our instructor, sitting on his horse in the middle of the corral, giving us all the usual precautionary instructions before we headed up the hill for the day’s trail ride. I vaguely heard him mention something about deer, but by that point my mind was somewhere else altogether. I was daydreaming of the wind in my face, Rainbow eagerly stretching out her neck as we soared over the plain, leaving all the other riders behind to stare in astonishment at our speed …

I suddenly snapped back to reality as I realized our instructor was looking directly at me. I gulped and blushed a furious red. “Yes sir,” I mumbled. I realized I had absolutely no idea what he had said, except that he had mentioned deer. Deer? That’s odd. He doesn’t usually say anything about that … I shrugged. Oh well. I probably just misheard him. I know his whole spiel.

Easily dismissing it, I followed the instructor up the path to the familiar trail, and settled into a sort of monotony as Rainbow earnestly trudged up the road. Same old trail ride as always, I thought gloomily.

Twenty minutes into the ride, we arrived at the clearing at the top of the hill. It was here that I had earlier dreamed of running free, and Rainbow tensed as she felt the change in my mood. I sighed. It would never happen—but at least we could break into a canter here. We always did.

I nudged Rainbow gently, and she obediently broke into the quicker gait, clearly enjoying herself. I expectantly glanced to the side, looking for the other riders to be matching my pace. To my surprise, I saw that they had all pulled over to the far right, and were plodding cautiously across the plain, giving a wide berth to the thicket of trees immediately to my left. That’s weird. Why would they—

I never had a chance to finish my thought. I glanced back in front of me and I saw them: a doe and her young fawn had just emerged from the thicket, and we were heading straight for them. I have never understood the expression “deer in the headlights” until that moment, seeing both the doe’s and fawn’s eyes staring in blank horror, tiny black pinpricks that loomed closer as Rainbow neighed in panic.

I didn’t know what to do—I had never had to soothe a spooked horse before. I vainly tugged on the right rein, leaning into Rainbow’s left side with my leg, but she was no longer responsive. Seeing the deer suddenly bound out had scared her as much as we had scared the deer.

Suddenly, Rainbow came to a dead halt. I screamed as I was pitched forward against her neck, but thankfully I had a tight grip. I managed to scrabble back into the saddle, fitting my heels into the stirrups and grabbing the saddle horn. I had lost my grip on the reins, however, and my scream had startled Rainbow even more. Whinnying frantically, she reared once—twice—three times.

The third time, my foot slipped out of the stirrup and the cinch came loose, and I fell, tumbling back into the dirt and rolling a few times before I came to a stop, dust caked on my hands and my helmet askew.

I looked up to see that my instructor, during all the scuffle, had hurriedly dismounted and rushed over, and was now standing a few feet in front of Rainbow, holding his hands up and talking to her in gentle, soothing tones. The deer were long gone, but Rainbow was tossing her head and sidestepping skittishly. Gradually, however, through half opened eyes I saw her lower her head and stand calmly in place as my instructor grabbed her reins. Then he walked her over to me and extended an arm to pull me up.

I stood up, ashamed and avoiding his gaze. He handed me Rainbow’s reins, which I sheepishly took in my hands. I began distractedly stroking her muzzle, mumbling words of calm as I tried to ignore the stinging pain in my back from the hard blow to the ground. Even worse was the pain to my ego, and worse still the embarrassment of knowing I had brought this on myself because I didn’t listen to the instructor.

Thankfully, he was very merciful, and merely asked me if I felt well enough to ride Rainbow back to the stable. I nodded, re-tightening her cinch and remounting. I patted her reassuringly and rejoined the group on the other side of the field. As we headed back, my head hung lower and lower. Of course we weren’t supposed to canter today. He knew that would spook the deer, which would spook the horses.

I learned a rather painful lesson that afternoon about the importance of listening to teachers’ and instructors’ directions. I thought I knew what I was doing, but I actually jeopardized not only my horse and myself, but potentially other riders and horses on the trail because I didn’t pay attention. Our instructor knew the potential dangers of spooking the newly arrived deer—it could have been much worse. Rainbow could have fallen on me and crushed me when she reared. She also could have stirred the other horses into a panic, and they might have broken into an uncontrolled run and hurt themselves in the ravine that followed shortly after the hill. And I’m sure my instructor explained all of those possibilities before we left—and I would have known, had I been listening to him.

We made it back to the stable safely, and I was even allowed to ride Rainbow in the future—but I always made sure after that fateful day to listen to the instructor before we went on the trail ride.