Fighting for Freedom
What you have in common with a 19th-century American hero
By Wayne Turgeon • June 8, 2021 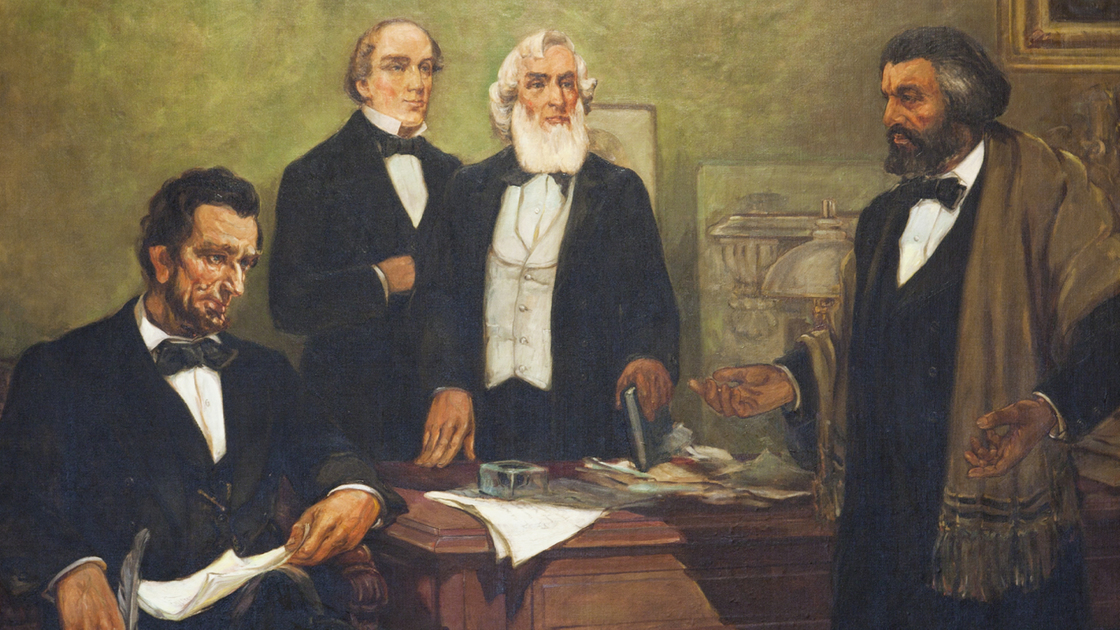 Frederick Douglass was born into slavery, yet became one of the most famous and influential men in American history. “Here comes my friend Douglass,” said Abraham Lincoln when he saw Douglass at his second inauguration. Through hard work and drive, Douglass rose above his humble beginnings. He became one of the most prominent anti-slavery activists of all time through his speeches and writings.

Douglass’s life work blazed a trail for black Americans and still benefits us today. His example proves that no matter how difficult or unfavorable our circumstances may be, we can still succeed if we are motivated by the right vision.

As a child, young Frederick witnessed and experienced the terrible atrocities of slavery. At the age of seven, he saw his aunt savagely whipped by her overseer. Once he saw a fellow slave murdered by his owner. He grew up never knowing who his father was, and was separated from his mother at age seven. During his time in slavery, Douglass started to teach himself how to read and write. When he started teaching other slaves how to read and write, he was beaten and whipped for it because his captor was afraid this would make Douglass too independent. It would have been easy for Douglass to give up, thinking there was no future for him because of all he had suffered.

At age 20, Douglass escaped by posing as a sailor in the Navy and sneaking onto a train. As a free man, Douglass put the skills he had taught himself into practice. He began giving speeches against the practice of slavery in the year 1841, and eventually started his own abolitionist newspaper called the North Star. In the years leading up to the Civil War, Douglass encouraged civil disobedience against pro-slavery laws. He also turned his home into a refuge for escaped slaves. After the war, Douglass became the first black man to hold a high office in the U.S. government when he served as an ambassador to the Dominican Republic.

Douglass’s life was quite the ascension! But none of it happened by accident. In order to make a name for himself, he had to work through adversity that we could never imagine. Here was a man born into slavery and beaten for learning to read. Still, he never let his trials get the best of him. Here are three virtues Douglass exemplified that can help us overcome our own adversity.

1. Stand up for what is right, no matter the consequences.

When Frederick Douglass escaped slavery, his story could have ended there. He could have just focused on securing a living for himself, which would have been a reasonable thing to do. But Douglass could not stand idly by while thousands of other blacks suffered in slavery. In Jeremiah 20:9, Jeremiah wrote that he couldn’t help but declare God’s message because it was like a burning fire in his bones. In the same way, Douglass had a fire in his bones for justice and equality that could not be quenched. As a result, he dedicated his life to the abolition of slavery.

Douglass chose to help others attain freedom, even though it made him unpopular. “I prefer to be true to myself, even at the hazard of incurring the ridicule of others, rather than to be false, and to incur my own abhorrence,” he wrote in his autobiography. We too must always be willing to stand up for God’s truth, even when we’re persecuted for it. God’s young people must care what God thinks more than what their friends or sometimes even family members might think. Douglass couldn’t stand idly by while slavery persisted, and we must also love this world enough to warn them before Jesus Christ returns.

Today’s society reacts to discrimination much differently than Frederick Douglass did. Instead of turning to hatred and calling for the destruction of America, Douglass stayed loyal to his country. His original last name was Bailey, but one of his friends suggested that he change it to Douglass. In a poem by Sir Walter Scott, “The Lady of the Lake,” a character with the last name Douglas is wrongfully banished from the kingdom, but remains loyal even when others rebel. At the end of the story, he is restored to his rightful place. This kind of loyalty was a character trait Frederick Douglass demonstrated despite the mistreatment he endured.

Douglass remained loyal to his country because he had perspective. “The Constitution is a glorious liberty document,” Douglass said. He hated slavery and saw it as a tragedy, but he also saw the bigger picture. Today, many people only focus on one incident or one little flaw and use it as an excuse to try to destroy the Constitution. This is the last thing Douglass would have wanted. Although America was unfair and unjust to Douglass, he still loved it because he saw far more good than evil in the Constitution.

We too must have Douglass’s mentality with respect to others. If we are wronged by others, we must always be willing to forgive. Hate the sin, but love the sinner. 1 John 2:15 says, “Love not the world, neither the things that are in the world ….” This is currently Satan’s world, but Christ still died for all mankind (John 3:16), not just His Church. We too must hate sin while still loving all mankind as God and Christ do.

As a man born into slavery and an unjust system, Douglass had to work extremely hard to even survive as a free man. The cards were stacked against him, but he was able to create his own opportunities because of his work ethic.

Douglass’s most famous speech was entitled “Self-made Men.” In this speech, he passed along words of wisdom that are beneficial to all young people, no matter their background: “Fortune may crowd a man’s life with fortunate circumstances and happy opportunities, but they will, as we all know, avail him nothing unless he makes a wise and vigorous use of them.… [W]e may explain success mainly by one word and that word is WORK! WORK! WORK! WORK!”

If you want to earn good grades or improve at a skill, you will have to work for it! It doesn’t matter how talented you are if you don’t have a work ethic. A lot of the time, people become successful because they don’t have a lot of natural ability—they have to really work hard to get anywhere in life. Such was the case for Frederick Douglass. It was his lack of schooling and lack of opportunities that made him have to work harder than most other men of his time.

Young people can sometimes think they don’t really need to take their studies or their spiritual lives seriously because their whole life is ahead of them. But there is not much time left in this world! Douglass didn’t sit on his hands and wait for someone else to tackle the issue of slavery. He was urgent and fought against it himself, even though he received persecution for it. So many people had far more advantages and privileges than Douglass did, but most of them did nothing about the issue of slavery. We have to be the ones to fight Satan’s slavery now.

Luke 13:24 says: “Strive to enter in at the strait gate: for many, I say unto you, will seek to enter in, and shall not be able.” We must strive to enter in at the strait gate. It takes work to make it into God’s Family! You have a rare opportunity that most could never dream of. It does matter what you do right now as a young person in God’s Church. Douglass worked to give all men physical freedom, but we are working right now to free all mankind physically and spiritually from the bonds of Satan’s slavery! Pursue your education and get behind God’s Work with as much fervor as Douglass had in his life.