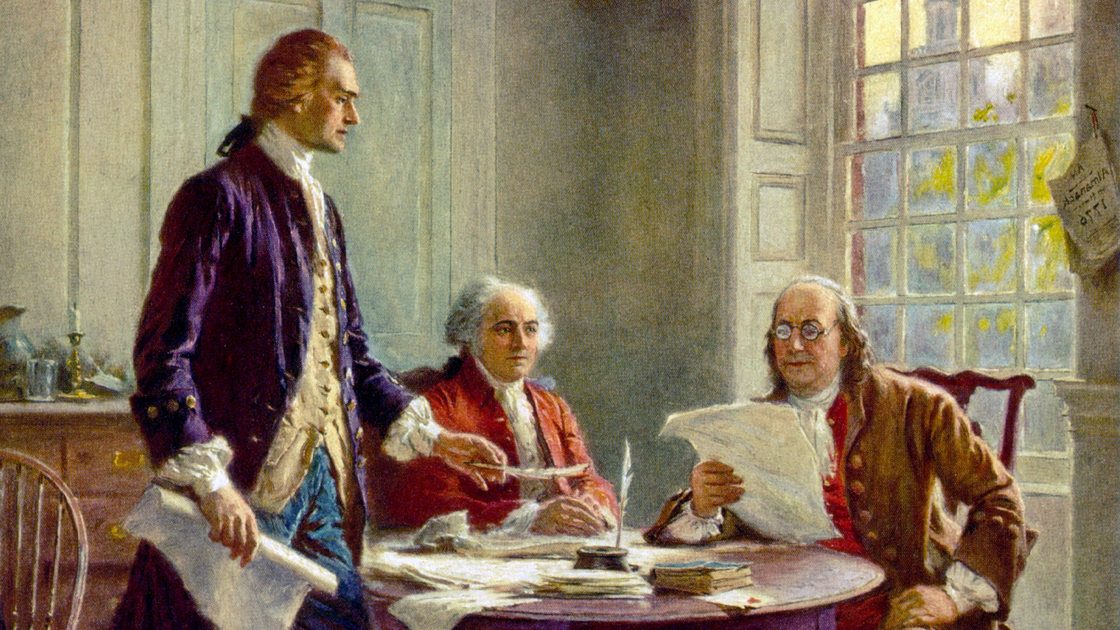 They were the best of friends; they were the bitterest of enemies. During the American Revolution, two of America’s founding fathers, John Adams and Thomas Jefferson, worked closely together to help America break free from England. Adams was one of Jefferson’s biggest supporters, advising Jefferson as he worked on the Declaration of Independence. Together, these two men were instrumental in gaining independence from Great Britain.

Despite their past, these men eventually had a great (and public) falling out. The start of the conflict occurred when the French Revolution broke out in 1789, less than two decades after America started their own revolution against England. Although the French Revolution was bloody and chaotic, Thomas Jefferson approved of it, calling it a “struggle which was necessary.” Jefferson believed the revolution in France was similar to America’s. John Adams saw things very differently: not as an honorable struggle, but as an anarchical and chaotic mess. Although Adams recognized the corruption in France’s former monarchy, he feared the French people would be unable to form a fair and stable government for themselves. “Everything will be pulled down,” Adams wrote. “… But what will be built up?”

Division between Jefferson and Adams increased after outspoken activist Thomas Paine wrote a book titled The Rights of Man, which became very popular in Europe. Paine’s views aligned with Jefferson’s. Jefferson urged an American printer to distribute the book, saying that it would disprove “the political heresies that have sprung up among us.” This was an obvious dig at Adams, which Jefferson later admitted to George Washington. When newspapers learned of the note, Adams became a target for ridicule. He was labeled a “monarchist,” probably the worst insult one could receive at that time. Jefferson privately disparaged Adams for “his apostasy to hereditary monarchy.”

For months, neither Jefferson nor Adams communicated with each other. Jefferson eventually sent an apology letter to Adams, but he never directly took full responsibility for the offense. Adams responded with a letter, telling Jefferson, “It is high time that you and I should come to an explanation with each other.” Jefferson sent Adams another letter, but still blamed other people for the miscommunication. This formed a rift between the two men that became a bitter rivalry.

This rivalry was exacerbated when both men ran for president in 1796. The division and mudslinging we see in our presidential elections today are not new. A pro-Jefferson newspaper called Aurora made fun of Adams’s physical appearance, calling him “His Rotundity.” They also frightened readers by suggesting that Adams was “the champion of kings, ranks, and titles”; in other words, Adams wanted to return to the old English system and eventually pass the kingship to his son. Meanwhile, supporters of Adams, chief among them Alexander Hamilton, accused Jefferson of being a philanderer and warned that he would plunge the United States into another war with England.

When Adams prevailed and won the election, he offered Jefferson the office of vice president. Jefferson accepted this offer for the good of the country, even though he probably didn’t want to serve under Adams personally. Showing the nation that opposing parties could work together would mitigate much of the division caused during the lead-up to the election. However, this move was purely political. Adams seldom if ever asked for Jefferson’s opinions or ideas as president. Jefferson said that over the four years, Adams never conferred with him “or ever consulted me as to any measures of the government.” Clearly, Adams had lost all trust in Jefferson.

For the next decade, their relationship further deteriorated. When it came time for the election of 1800, Adams and Jefferson campaigned against one another again, and the attacks were even uglier than the first time. Jefferson privately supported controversial journalist James Callendar, who was infamous for his attack pieces on politicians. Callendar wrote that Adams was “one of the most egregious fools upon the continent … that strange compound of ignorance and ferocity, of deceit and weakness ….” Jefferson approved: “Such papers cannot fail to produce the best effects.” Meanwhile, Adams’s supporters reciprocated, calling Jefferson an atheist, a coward, and a lover of French ideas and philosophy more than American values.

When Jefferson won the election, the two men were estranged for several years. Adams didn’t even attend Jefferson’s inauguration.

If the story of Adams’s and Jefferson’s friendship ended there, it would make for a pretty depressing story. But in 1809, the year Jefferson’s presidency concluded, everything changed. Benjamin Rush, a mutual friend of both men and a fellow signer of the Declaration of Independence, wrote to Adams that he had had a dramatic dream involving Adams and Jefferson. Rush dreamed that Adams sent a letter to Jefferson after Jefferson’s last presidential term ended, and that Jefferson replied with a friendly letter of his own. “These letters were followed by a correspondence of several years, in which they mutually reviewed the scenes of business in which they had been engaged, and candidly acknowledged to each other all the errors of opinion & conduct into which they had fallen during the time they filled the same stations in the service of their country,” wrote Rush. Whether that dream was just a coincidence or not, it nevertheless impelled Adams to make the first move in reconciling with his old friend.

In 1812, Adams finally reached out to Jefferson with a short note wishing Jefferson success in the years ahead. “A letter from you calls up recollections very dear to my mind,” replied Jefferson. With the help of a mutual friend and some kind words, their dormant friendship was revived. For the rest of their lives, Adams and Jefferson exchanged hundreds of letters.

By choosing to focus on each other’s positives, America’s second and third presidents were able to overlook all the wrong they had done to one another during their time in politics.

This heart-warming story came to a remarkable end in 1826. “These gentlemen sunk [sic] into the grave nearly at the same time, full of years, and rich in the gratitude and praises of their country,” Benjamin Rush had written 17 years prior. On July 3, 1826, Rush’s dream became reality when both Adams and Jefferson became deathly ill. Jefferson slipped into a coma that evening before Adams fell unconscious in his home. The next day, both men died—on the Fourth of July.

One day we will know whether God orchestrated these events.

Regardless, the example of Adams and Jefferson can be a powerful lesson for us. Hopefully we never lose any friendships to begin with, but if we do, these presidents provide an example of how to fix such a situation. Sometimes there are a lot of differences in personality that can cause problems, but the way to overlook those differences is to focus on the positives in the other person.

If we look for negatives, we will always find them. The Pharisees found lots of faults in Christ even though He was perfect (Matthew 9:3; 26:59-61; Luke 6:7). If we choose to look for the positives, we will find the positives. Philippians 4:8 says, “[I]f there be any virtue, and if there be any praise, think on these things.” If issues arise between you and your friends, learn to forgive and forget like Adams and Jefferson did. As Ephesians 4:32 says, “And be ye kind one to another, tenderhearted, forgiving one another, even as God for Christ’s sake hath forgiven you.”