PCG members: In addition to PCG Signposts, sign-up for the members-only Friday Philadelphian weekly email newsletter! Click here or email news@pcog.org ✖
I Shall Return
How one man finished what he started … against all odds
By Brad Macdonald • Jan. 5, 2021 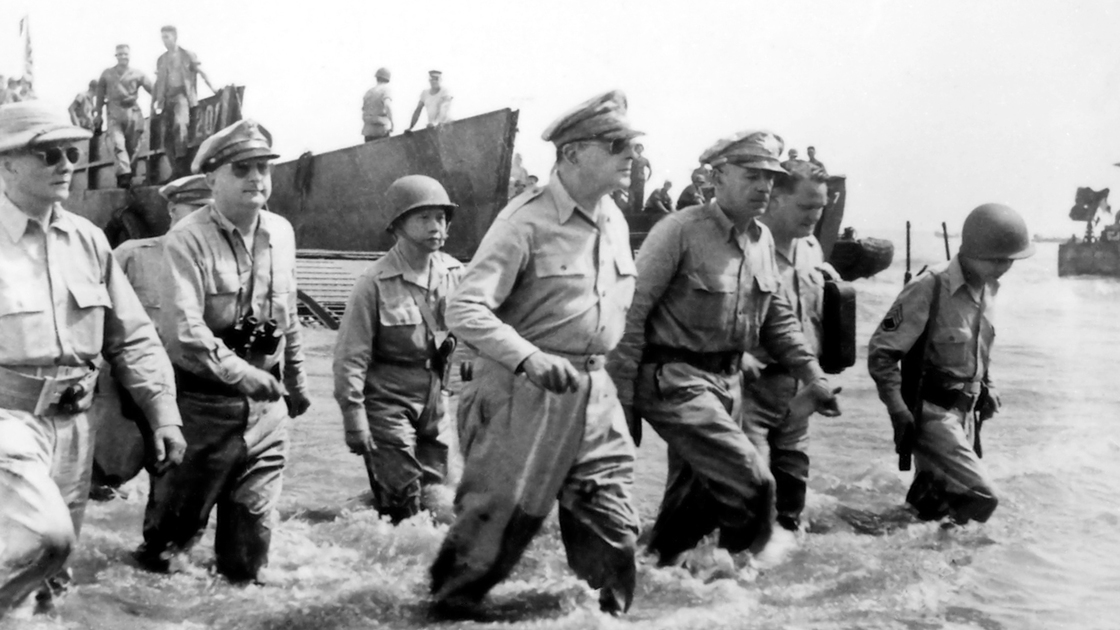 Have you ever undertaken tasks or set goals in your life that you never completed? Are you inclined to start something and not finish it? Do you often start something all gung-ho, and then lose your energy and passion when you get halfway through?

Effective leaders finish what they start.

When the going gets tough, a real leader gets going. When he feels tired and run down, he digs his heels in and finishes what he started. When he runs out of steam, he puts more coal in the burner and makes some more. And when the end is in sight, he works harder and faster to get there.

Let’s take a look at an outstanding example of a man who always finished what he started; a man who persevered through the tough times. He was a man who, even during the toughest battles, NEVER contemplated giving up. This man not only endured the tough times, BUT EXCELLED IN THEM. He finished his race, for himself, and the AMERICAN PEOPLE.

This man is General Douglas MacArthur.

Douglas MacArthur was the general in charge of the United States Army in the Pacific during World War II and the fight against the Japanese.

General MacArthur had been assigned to Manila, the capital of the Philippines, in 1935. Here, his job was to instigate the U.S.-designed “Philippine Army Program.” This 10-year program was to build and train a powerful Philippine army so that, in the event of a war with Japan, the U.S. would have an allied army in the Pacific region and infrastructure from which to launch a war on Japan.

Upon arrival in Manila, MacArthur immediately began to implement this plan. He developed a strong working and personal relationship with the Filipino president, and, in turn, the whole country welcomed MacArthur and the Americans into their nation.

MacArthur loved the Filipinos, and they loved him. He was their adopted military leader and they were his adopted children.

His 10-year plan, however, was abruptly interrupted.

On December 7, 1941, U.S. forces at Pearl Harbor were bombed. The Japanese wanted to fight. After Pearl Harbor, the Japanese air force speedily thundered toward Australia, destroying everything in its path, including the U.S. and Filipino forces in the Philippines. By January 1942, MacArthur’s forces at his Manila headquarters were surrounded.

MacArthur had two choices. One was to surrender to the Japanese. After all, he had done his best and everybody knew it. He was so popular back home that he was nominated to run for the presidency. MacArthur could have left the Philippines, saved his army, and headed to the U.S., with a good chance of becoming the next president. But he did not. MacArthur had started a race, AND HE WAS GOING TO FINISH IT.

Instead of surrender, MacArthur took the second and most dangerous option. He moved his headquarters and army from Manila to the small, but militarily strong, Bataan Peninsula. Here, the army dug itself into the deep forest, the caves and the trenches. MacArthur was prepared to fight.

On Bataan, even under horrifying conditions, MacArthur continued to fight the Japanese.

At this time, when the ominous Japanese army would soon invade the peninsula, United States Secretary of War George Marshall personally requested that MacArthur speedily leave the peninsula.

This was another opportunity for MacArthur to leave, and save himself and his family. But did he? Here is what Frazier Hunt wrote in The Untold Story of Douglas MacArthur: “The General sought Jean [his wife], and quietly they talked it over. The military situation was rapidly deteriorating, and there might not be another chance for escape for the two he loved deeply. Jean must make the decision herself.

“‘We have drunk from the same cup,’ she finally said. ‘We three shall stay together.’”

MacArthur and his family willingly refused to leave. In a reply letter to Marshall, MacArthur said he “would remain on Corregidor [the last island that the army held against the quickly advancing enemy] and share the fate of the garrison.”

What a leader. Whether Filipino citizen or U.S. soldier, I would have been encouraged by this man. Here was the highest-ranking U.S. leader in the area, and he was flatly refusing to leave his army and the Filipino people. MacArthur had started something, and he was prepared to finish it, even it meant his death.

As a teenager, do you continue on in the face of adversity? Are you constantly digging in, refusing to give up, and ready to fight to the end?

Or do you give up and go home?

Soon after refusing to leave Bataan, MacArthur was sent a personal note from President Roosevelt. Roosevelt told the courageous general that his leadership services were needed in Australia, where the U.S. Army would re-group and use Northern Australia as a launching pad against Japan. MacArthur, though hesitant, saw the logic in this decision. With reluctance, he agreed to take his family and leave Bataan on a small army boat. However, before he left the peninsula, there was one more thing he needed to do.

MacArthur delivered a powerful speech to the Filipino people. He gave instructions that, if he reached the shores of Australia without being killed, this speech was to be read over national radio to the entire nation.

MacArthur reached the Australian shores in late March 1942, and soon after the entire nation of the Philippines heard the stirring and heartfelt speech of Gen. Douglas MacArthur. His last words to the people were: “I SHALL RETURN.”

MacArthur had started something in the Philippines, and he was determined to finish it. His biography reads, “During the dangerous sea and air trip, the general’s spirits were constantly revived by the thought that once he reached his new assignment he would find a sufficient force awaiting him so that he could IMMEDIATELY organize a great relief expedition for the Philippines” (ibid). At a time when he could have easily and justifiably forgotten about the Filipino people and his embattled troops, MacArthur became MORE DETERMINED THAN EVER TO FINISH WHAT HE HAD STARTED THERE.

In February 1945, two and a half years after he had left Corregidor, with overwhelming emotion, MacArthur stepped onto the shores of the Philippines once more at the head of liberating U.S. forces. Just as he promised, Gen. Douglas MacArthur returned to the Filipino people and rid the enemy from their shores.

How satisfying must this have been for this man! Ten years earlier, he had started his race in the Philippines. Now, after intense fighting and gallons of blood, sweat and tears, HE WAS ABLE TO FINISH WHAT HE STARTED.

What a leader! HE HAD STARTED SOMETHING INTHE PHILIPPINES, AND EVEN IF IT MEANT HIS DEATH, HE WAS GOING TO FINISH IT.

What about you? What about me? Do we stick to something after we start it? Are we applying this principle at school, or in our employment? Are we finishing our individual races?

MacArthur felt strong emotions the day he returned to the Philippines. How gratifying it must have been to step out on that sandy shore and fulfill a promise that he had made to the Filipino people two and a half years earlier. He knew he had completed his race and upheld his integrity. He had been a man of his word.

You too can feel these same honest and pure emotions in the various races you are running in your life. But it will take hard work, fortitude, perseverance, education, honesty and, ABOVE ALL, a wholehearted, sincere and determined will to FINISH THE RACE.