Making Mountains Out of Molehills
Relax—that problem you’re facing may be no bigger than having the wrong pair of socks.
By Christina Dattolo • Jan. 7, 2021 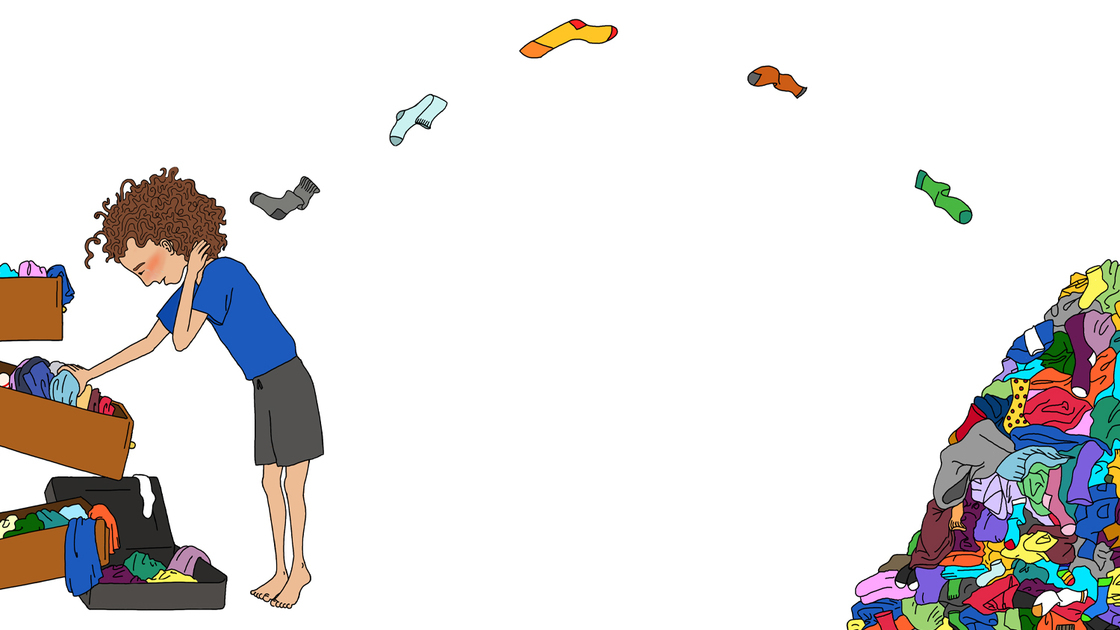 Groggily I lifted my head from the pillow, sad to leave my cocoon of blankets. Around me, the 11 other girls in Dorm 6G slowly wriggled out of sleeping bags and shuffled behind our counselor to the front porch of the trailer, where we stretched every morning in the humid Oklahoma air.

It was my first pyc (now called sep) and I was unfortunately not what you’d call a “happy camper.” I was struggling with homesickness and an unusual sense of shyness that had never plagued me before, and I was particularly disagreeable in the early mornings.

As we stretched, however, I gradually began to emerge from my sleep coma and decided that maybe life wasn’t so unbearable after all. Moving my sore muscles was somewhat relieving, and I had to admit that I did have an awesome counselor. It was hard not to cheer up when she and our assistant counselor played music and talked with us each morning when we went out to the porch.

And then it happened: My counselor asked the girls if we all wanted to wear our matching knee socks.

Quickly my mind flitted back. I remembered the first day of camp, walking into the trailer that would be my home for the next three weeks. My name had been written on a binder in neat letters in one corner of the bedroom, and underneath my name had been a polka-dotted journal and a pair of white knee socks with three bright red stripes on them. I was elated because red was my favorite color. Carefully, I carried them into the closet and tenderly placed them on the shelf.

Our counselor had told us that night that if we wanted, we could all wear matching socks on the day we sang our dorm song. Everyone had voiced their unanimous agreement.

The day had now come: We were singing our dorm song at lunch. I smiled as we filed back into the bedroom and began rolling up our sleeping bags. Maybe today will be pretty good after all, I thought. Now that my grogginess had worn off, my mood had improved.

As soon as my sleeping bag was neatly rolled up, I happily bounced into the closet to retrieve my prized possession. But when I placed my hand on the neatly folded pile of clothes, I felt no rolled-up socks. Frowning, I stood on my tiptoes, reaching to the back of the shelf. Nothing. Next, I tore through the rest of my clothes, thinking maybe they had gotten shoved underneath. Nope. Nada. Zilch.

Next I combed through my suitcase to see if somehow they had ended up in there. I even enlisted the help of a couple other girls, who searched through their things. Still no socks.

My mood fell apart again. I began to cry. My counselor, concerned, took me into the kitchen and asked me what was wrong. Tearfully I explained that I couldn’t find my knee socks and I wasn’t going to be able to match and I was the ugly duckling of the dorm. She smiled, probably relieved that nothing serious was wrong. But no matter how much she tried to console me, I remained unmoved.

“It’s OK. Just get your prayer and study in, and don’t worry about the socks. No one will notice!”

Unconvinced but resigned, I returned to the bedroom and weepily began my prayer and Bible study. An hour later when we suited up for dorm duties, my mood had unfortunately only worsened. With each pair of socks my dorm-mates donned, I grew increasingly morose.

As I finished dusting off the blinds, one of my dorm-mates came up to me with long, plain white knee socks. “You can wear these if you want,” she offered with an encouraging smile.

I smiled back, albeit somewhat pitifully. “Thanks,” I mumbled. Slightly mollified, I pulled the socks on and hurried out for the dorm study and prayer before we headed off to breakfast.

The whole walk from the trailer to the John Amos Field House, I skeptically surveyed the socks I wore. They were a good inch shorter than the ones our counselors gave us, and they were woefully bare of the colorful stripes bedecking the others. I worried that the difference would stand out.

It was a silly fear—even if anyone did notice, who would care? I tried to convince myself of that fact, but part of me still refused to calm down. Instead, a little voice in my mind nagged constantly at me: You don’t fit in! People will laugh! You’ll look out of place when you’re singing! You don’t belong!

All through the day, this weighed on my mind. Even as we sang our dorm song, I felt very self-conscious. I began to feel a little better, however, when the only comments I heard afterward were positive—that we sounded good, the lyrics were funny, etc.

In this way, the day passed—and not one person had said anything about my socks. In fact, we did hear several people say they liked the way we all matched—but no one brought up the fact that my socks were a little different. Either no one truly did notice, or—more likely—it just didn’t matter.

When we arrived back at the dorm that night, took showers and ate our snacks, I began to feel ashamed of myself. I had, as my mother liked to say, made a mountain out of a molehill—I had taken a microscopic bump in the road and morphed it into a towering trial.

As the other girls laughed and giggled, I munched thoughtfully on orange slices in my corner of the room. The more I thought about it, the more I realized how difficult I had been all day—I had worried my counselor over nothing, I had taken up some of the girls’ time looking for my socks, and—maybe worst of all—I hadn’t even bothered to properly thank the girl who so kindly lent me her spare pair.

Suddenly filled with resolve, I jumped up and approached the other girl. “Hey—I’m really sorry for being so dramatic this morning. I just wanted to say thank you for letting me borrow your socks so I wouldn’t be left out—that was really sweet of you to do.” I then apologized to my counselor as well.

I realized as I prepared for bed that I had totally overreacted. What I saw as a mountain turned out to be only a molehill—and out of it came the opportunity for a better friendship with one of the girls in my dorm, because she saw an opportunity to serve.

I felt better than I had all day. As I laid my hairbrush down on the shelf in the closet, I felt an unfamiliar lump. Switching the light on, there were my socks, neatly folded in the back corner of the shelf.

It can be easy to make problems seem larger than life—especially when the difficulties involve fitting in with our peers. But God tells us not to worry or stress about those things that are beyond our control: “Be anxious for nothing, but in everything by prayer and supplication, with thanksgiving, let your requests be made known to God” (Philippians 4:6; New King James Version).

God will always answer our prayers, no matter how small or trivial our worries are—He just doesn’t always do it the way we expect. I found my missing socks—just later than I would have liked. But if I had found them that morning, maybe I never would have come to appreciate what my counselors and dorm-mates did for me—or learned the lesson of recognizing a molehill when I see one.