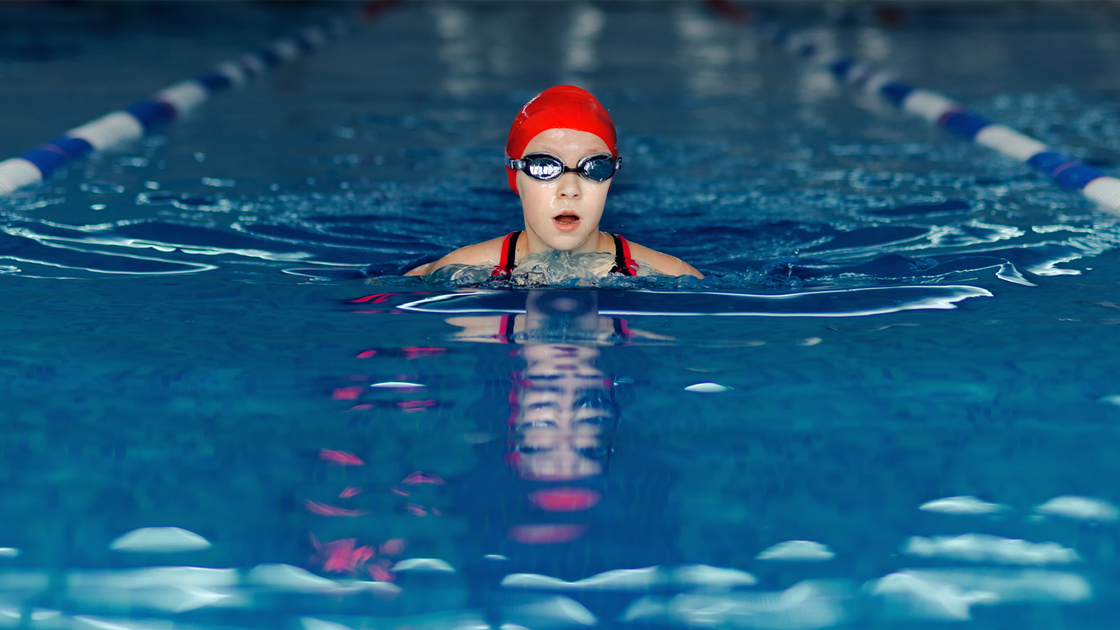 The room smelled of chlorine, as it always did. I glanced longingly at the pool, wishing we could hurry up and get the instruction over with so I could dive in and swim down the lane.

It was the third swim class of the week on a Friday afternoon. I had come straight after school, put on my bathing suit, gone out to the deck and obediently sat down to await the instruction from our swim teacher Sebastian. This was the usual practice—every class we would listen to Sebastian’s instruction until we were given permission to get in the pool. Then we donned our white swim caps and hopped in.

But something was different today. I was in the 9-12 age bracket, but I was on the youngest edge of that spectrum. One of the older girls in class, a 12-year old, was clearly disgruntled with Sebastian. She fidgeted beside me through his entire lecture, and was clearly also itching to get in.

Finally, after what seemed an eternity, Sebastian had finished his demonstration of a new stroke. He told us to grab our standard-issue white swim caps and jump into the cool, inviting water.

Eagerly, I reached over to grab a cap from the bin, when suddenly the older girl beside me crossed her arms and whined, “Those caps are stupid. I don’t know why you make us wear them. We’ve been swimming for a long time. We can swim without them now. I’m not wearing mine.”

My hand froze in midair, my mouth agape with disbelief. Sebastian was pretty much everyone’s favorite swim teacher—he always played games and he let us go in the deep end. That being said, we all knew he meant business—he did not tolerate disobedience or a bad attitude. If you talked back to him in class, it was a guarantee you would be sitting forlornly on the pool deck for the rest of the hour.

Armed with this knowledge, I was even more surprised when Sebastian just wearily turned to the older girl and sighed. For the first time, I noticed he had dark circles under his eyes and he looked exhausted. Maybe he isn’t having a good day, I thought. I felt bad for him. Poor Sebastian.

To my further astonishment, the girl didn’t back down. She continued, “I’m old enough to swim without it. I don’t care if I have to stay on the pool deck. I’d rather do that than swim with that silly thing on.”

Emboldened perhaps by Sebastian’s wearied lack of response, several of the other students chimed in, including some that I regularly swam with during class and was good friends with. “Yeah! I don’t want to wear them either.” “They’re dumb and I don’t need them.” “They hurt my head!”

I suddenly became very aware that I was the only one with my hand anywhere near the bin of the offensive caps. It seemed like every pair of eyes turned on me, the only loyalist in this uprising. Nervously I gulped and cast a sidelong glance at the caps, so neatly folded. They do kind of hurt…

Slowly I moved my hand away and let it rest in my lap. Then, almost as if I were someone else hearing my own voice, I said, “I’m not going to wear mine either—and you can’t make me.”

Even as the words came out of my mouth, I was shocked. What did I just say?! But before my shame had time to fully register, Sebastian had climbed out of the pool and picked up the bin of swim caps. Immediately everyone stopped talking and nervously awaited his response.

Sebastian said nothing. I could see his jaw clenching, and again I wondered what had happened to make him look so worn today. Wordlessly, he went around to every student and put the caps on their heads, snuggly fitting them on with a steely look of finality in his eyes. No one protested, though a few—including the girl who had masterminded the operation—rolled their eyes in annoyance.

When Sebastian came to me, he paused and let out a long sigh before he placed the cap on my head. I cast my eyes down, unwilling to look at him. I let him down…

That swim class was miserable. Sebastian played no games, and he didn’t even come to me when I was in the deep end to see how well I was doing like he normally did. The tension in the air was palpable, and all the joy had been sucked out of my swim lesson. I wanted nothing more than to leave.

Finally, Sebastian blew his whistle and the class was over. Hastily I scrambled out of the pool and threw the cap into the bin, rushing for the locker room. Once there, I heaved a sigh of relief as I stepped into the shower. Maybe he’ll forget all about it by Monday, I reasoned. He might even let us swim without the caps—I mean, they do seem a little unnecessary. It wasn’t that bad to speak up about it. I had pretty much whitewashed myself of any blame by the time I trotted out to meet my mom.

As soon as I saw Mom, though, I knew this was far from over. She was frowning and looked none too pleased with me. Cautiously, I approached. I was about to try to charm my way out of trouble with some cheesy line about how much I had missed her during swim class, but she took me by the shoulders and marched me right back into the locker room before I had the chance to speak.

When we were in the locker room, Mom sat me down on the bench and crossed her arms. “Sebastian came out and told the parents what happened in class today.” I bit my lip nervously. “Do you know what he said, Christina?” I winced. If she used my full name, I was in for it.

Mom sat down next to me. “He said, ‘Even sweet Chrissie, who is usually so obedient, was complaining today.’” She paused to allow the words to sink in.

Tears began welling up in my eyes. I knew I was supposed to set an example—and I had let down both my mom and my teacher. He had expected me to be the one example of obedience to authority, and instead I had caved in to peer pressure and complained just like everyone else—and I honestly didn’t even care about wearing the swim caps! I just wanted to fit in.

Mom led me back to the pool to apologize. I don’t recall exactly what I said, but I vividly remember tears streaming down my face as I blubbered through my apology. I also remember Sebastian tilting my chin up to look at him and telling me it was all right and that I was forgiven.

I felt a huge weight lift off my shoulders. I left swim class that day feeling much happier than I had the whole period, and the impression it left has stuck with me in the years since. King Solomon once said, “My son, if sinners entice thee, consent thou not” (Proverbs 1:10). This could certainly apply to peer pressure. Unfortunately, I caved in to the pressure that day and followed my classmates in rebelling against authority. But I learned a valuable lesson: giving in to negative peer pressure didn’t make me feel better. In fact, it made me feel worse—and I only felt better once I had apologized and set things right, determining never to do it again.

The next time you’re tempted to go along with the crowd when you know it’s wrong, take a lesson from a nine-year-old girl who balked at the wardrobe requirements in swim class, and instead be the one to stand up for authority and do what’s right.