The Nerve of Evolutionists
A careful look reveals facts that, for some, may be a pain in the neck.
By Jeremiah Jacques • Nov. 17, 2020 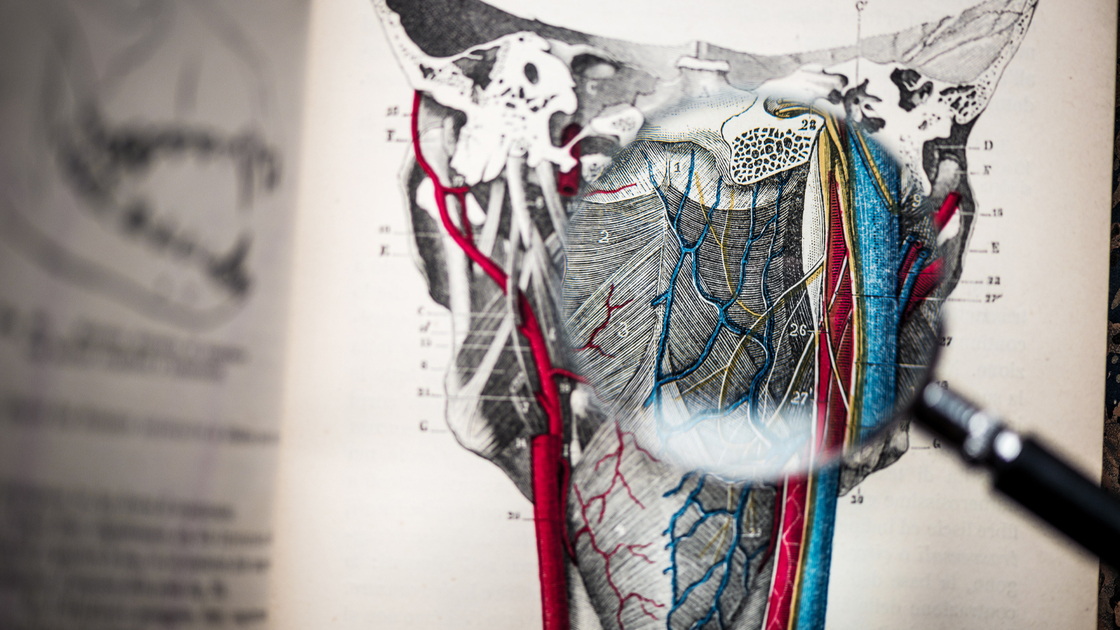 “No engineer would ever make a mistake like that.” Richard Dawkins, the famous British evolutionary biologist, spoke those words as he oversaw the dissection of a Rothschild giraffe.

The dissection was part of a 2009 episode of the British science documentary series Inside Nature’s Giants, which continues to circulate on YouTube where it has been viewed hundreds of thousands of times. It focused on the animal’s recurrent laryngeal nerve, which is a branch of the vagus nerve. This nerve emerges from the animal’s brain, and its end organ is the larynx—about two inches away.

On the larynx, it innervates small muscles that make sounds, as well as some that coordinate breathing and swallowing.

This all sounds straightforward enough. But what Dawkins’ crew confirms with the dissection is that instead of going straight from brain to larynx, this nerve runs from the brain all the way down the giraffe’s neck and into its chest where it U-turns and runs back up the neck again and then finally connects to the larynx. In large giraffes, this nerve can be more than 16 feet long.

Dr. Joy Reidenberg is the anatomist slicing the animal’s neck open and holding the nerve up for the live audience members and cameras to see its long and indirect path. “It really only needed to go about two inches,” she says, “but it went all the way down, and then came all the way back.”

Mark Evans, veterinary surgeon and presenter of Inside Nature’s Giants, chimes in to explain how such a “ridiculous detour” naturally came about. “It turns out,” he says, “that the laryngeal nerve first evolved in fish-like creatures as a direct link from the brain to gills near the heart.” Then as neckless fish supposedly evolved over millions of generations into creatures with longer and longer necks, “this nerve gradually lengthened.” It grew longer rather than re-route itself straight to the larynx, he says, because “each small step was always simpler than a major rewiring to a more direct route.”

And it’s not just in giraffes.

Dawkins points out that the laryngeal nerve takes this same indirect route in all known tetrapods on earth—including humans. Of course, it isn’t as long in us as in giraffes because our necks are shorter. But it still constitutes a “ridiculous detour,” which Dawkins argues not only proves evolution true, but also proves that there is no Intelligent Designer. “Remember that a Designer, an Engineer, can go back to the drawing board, throw away the old design, and start afresh with what looks more sensible,” he says. This is because a designer “has foresight.” But evolution, on the other hand, “can’t go back to the drawing board” because it “has no foresight.”

This nerve represents a “mistake,” he says, that “no engineer would ever make.”

So there it is. The laryngeal nerve is presented as a sloppy post-hoc workaround that nature, in the absence of foresight, cobbled together. It’s an evolutionary kludge. An artifact left over from a primitive phase of life that provides no benefit to modern giraffes, people or any of the thousands of other creatures the detour is found in. And it came about in a way that an intelligent creator with foresight would surely have avoided.

Dawkins, Reidenberg and Evans are far from alone in declaring that this nerve’s “ridiculous detour” proves that life came about not by design, but by chance.

In his book Why Evolution Is True, evolutionary biologist Jerry Coyne calls the giraffe’s left recurrent laryngeal nerve “one of nature’s worst designs.” He argues that design “flaws” such as this are “precisely what we would expect from evolution.” Several other prominent evolutionists, including Neil Shubin and Carl Zimmer, have echoed the same basic sentiments.

Is the argument over? Is evolution real, and God doesn’t exist? Actually, there is more to this story.

One fact that Dawkins and the other evolutionists don’t typically draw attention to is that the recurrent laryngeal nerves are actually one of two sets of nerves that connect the brain to the larynx. The other is the superior laryngeal nerves, which run directly from the brain to the larynx—with no detour into the chest. So Dawkins and the others should have asked this: If one set of nerves is already going direct from brain to larynx, WHY do the recurrent laryngeal nerves take the apparently indirect route? Do they accomplish anything along this path to the chest?

This is a crucial question. And its answer is a booming yes.

So the nerve does not travel into the chest on some arbitrary path. It travels a specific trajectory that hooks around a segment of the aorta, through which blood leaves the heart and flows into the body. And notice what happens at this loop: “As the nerve curves … it gives several cardiac filaments to the deep part of the cardiac plexus” (ibid).

So the recurrent laryngeal nerve extends to the cardiac plexus—the large network of nerves in the chest—where some of its branches (or filaments) connect. These branches actually constitute part of the cardiac plexus and play a role in innervating the heart.

So this nerve is clearly not designed just to innervate the larynx.

Gray’s Anatomy then explains additional connections the recurrent laryngeal nerve makes as it makes its way back up to the brain: “As it ascends in the neck, it gives off branches … to the mucous membrane and muscular coat of the esophagus; branches to the mucous membrane and muscular fibers of the trachea; and some pharyngeal filaments to the Constrictor pharyngis inferior.” These areas play a role in breathing, swallowing or both—critical functions for most any organism. And these areas are all innervated and coordinated at least in part by the recurrent laryngeal nerve.

To hear Dawkins and the other neo-Darwinists discuss this nerve’s path, you would think it leaves the brain, runs haphazardly down into the abdomen and then runs back up to the larynx where it finally connects once again. But the truth is that along that long path, it makes numerous important connections. With these connections, the nerve helps multiple muscles operate in intricate conjunction with each other—and accomplish several vital functions.

This nerve, like the millions of other intricate parts of giraffes, people and all life on Earth, is clearly the creation of an incomprehensibly brilliant and powerful mind, not random chance.

Are Dawkins and other neo-Darwinists—who call this nerve a smoking gun for evolution—ignorant of the numerous important connections and functions accomplished by the nerve’s usual route? They don’t mention them to the dazzled spectators on Inside Nature’s Giants or in the most pro-evolution books and articles on this topic. But how could these experts not know what is well documented in the world’s best-known anatomy textbook and by authorities such as Lönnig?

Perhaps in some cases omitting this crucial scientific information is just a result of ignorance. But in many cases, scientists are agenda-driven. And their agenda overshadows their interest in true science.

The late educator Herbert W. Armstrong explained the origins of this modern approach to science in his book Mystery of the Ages. He explains that in the centuries leading up to the Scientific Revolution, the Roman Catholic Church reigned as the main authority and the gatekeeper of knowledge for much of the western world. After the advent of the printing press in the 15th century, knowledge began to be broadly diffused, and Catholic leaders often viewed scientists and their discoveries as a threat to their positions of power. They despised those who weakened their authority by proving that the church was wrong about such teachings as geocentrism (the Earth being the center of the universe) and perfect heavenly bodies.

So competition developed between the Roman Catholic Church and scientists. And for some scientists, the desire to undermine the church’s authority became a driving motivation. Some went even further: To discredit the very foundations of religion, they aimed to eliminate a Creator God. “In the vanity of their self-professed scholarly minds,” Mr. Armstrong wrote, “they tried … to work out a solution to the mystery of origins, existence, and life by reasoning out a self-satisfying, materialistic explanation.” This was the reasoning that spawned the evolutionary theory.

Modern proponents of evolution often study into a given matter with their conclusion already firmly in mind. Whatever they can contort into supporting the arguments for evolution, they loudly proclaim. All else they ignore, discard or downplay.

This is a big part of what is apparently at play with Richard Dawkins and other evolutionists regarding the recurrent laryngeal nerve. Scientific integrity and even just a dash of humility would compel these individuals to approach the study like—well, like scientists. This would mean observing, studying, assembling and verifying facts, and then drawing conclusions based on the complete picture of what is discovered.

Instead, these “self-professed scholarly minds” go about the whole thing backward. And in the process, their objectivity and integrity are eviscerated.

Long before the evolutionary theory was hatched, the Apostle Paul talked about this kind of approach. In 1 Timothy 6:20, he called it “science falsely so called.”

True science is objective. It is humble. It trembles before truth, giving up anything that is disproven and following where the facts lead—free of any agenda.

But “science falsely so called” wants to prove itself right, even at the expense of truth. That sometimes means presenting only half of the story, as evolutionists discussing the recurrent laryngeal nerve tend to do. In modern academia, there is a growing antagonism toward those who don’t submit to these kinds of partial and false teachings. Those who believe in a Creator God are increasingly bullied and silenced.

But instead of cowering in the face of this bullying by “science falsely so called,” we should be confident that God is perfect (Matthew 5:48), and the people and animals He created—including the giraffe with its recurrent laryngeal nerve—are “very good” (Genesis 1:25, 31). Each of us should take on the beautiful attitude that David had toward God, knowing full well that the He is our brilliant and wonderful Creator. “I will praise thee; for I am fearfully and wonderfully made: marvelous are thy works; and that my soul knoweth right well” (Psalm 139:14).