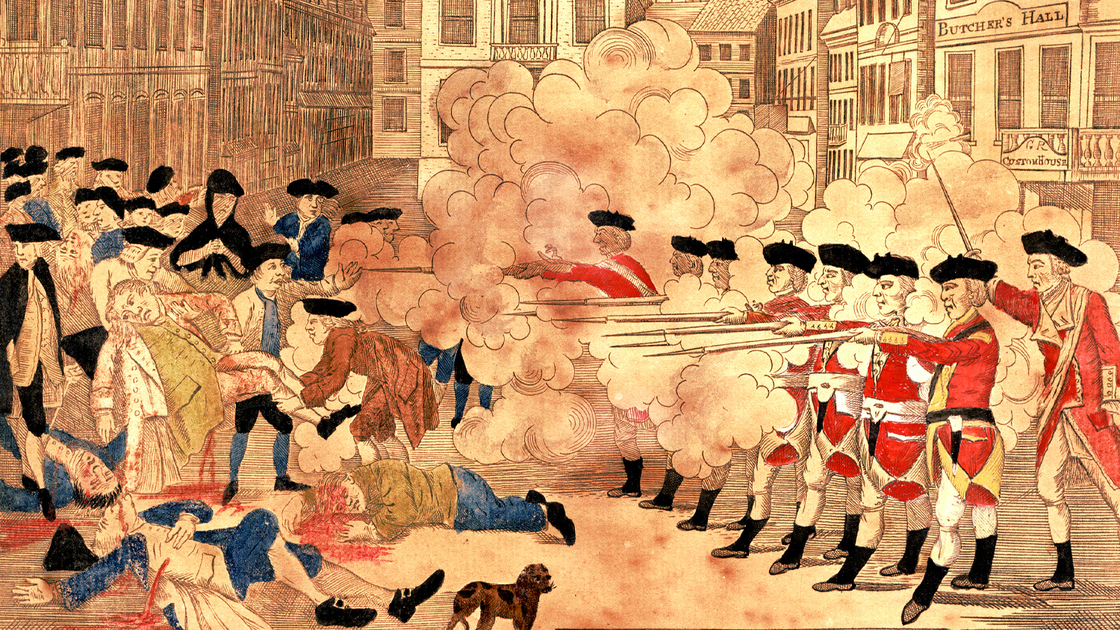 On a cold, snowy evening in 1770, Boston church bells rang as a mob filled King Street. Angry colonists were taunting and threatening a lone British sentry in a lobster-red coat at the customs house. Using sticks, snowballs, oyster shells and even clubs, they created enough ruckus that Capt. Thomas Preston led seven more British soldiers out to back up the sentry. In the chaos, a single shot was fired. This was followed in rapid succession by several more. When the smoke cleared, three colonists were lying dead in the snow. Two more would die later from their wounds.

Revolutionary statesman Samuel Adams was quick to call the event a “bloody butchery.” A few days later, a pamphlet went out excoriating the British for their cold-blooded murder of colonists. Even the name of the incident—“The Boston Massacre”—indicates how the public viewed it at the time.

No lawyer wanted the job of defending the British soldiers in their trial. However, when he was asked, John Adams knew what he had to do. He feared for the safety of his family and the impact such a decision would have on his law practice. Yet, as David McCullough writes, “Adams accepted, firm in the belief, as he said, that no man in a free country should be denied the right to counsel and a fair trial, and convinced, on principle, that the case was of utmost importance. As a lawyer, his duty was clear.

“Criticism of almost any kind was nearly always painful for Adams, but public scorn was painful in the extreme,” McCullough writes. Adams was naturally a people-pleaser, but his dedication to the law overrode that tendency.

There is no record of Adams’s arguments in the first court trial, but the defendant, Captain Preston, was found not guilty. In the second trial, Adams kept the eyes of the jury off emotion, and off the agenda of the Revolution, and put them on the law. Adams argued that there was no evidence to show that the soldiers fired out of malice. All evidence pointed to them acting in self-defense. As much as the colonists wanted to pin sole blame for the five deaths on the soldiers, furthering the revolution, the law and the facts of the case showed that the soldiers could not justly be hanged for murder.

As a result of Adams’s defense, five of the soldiers were found not guilty. Two were convicted of manslaughter and were branded on their thumbs as punishment.

Along with the jury, John Adams had shown Boston, Britain and the world that Americans respect the law.

The quality of the defense Adams mounted is evidenced by the fact that most of the soldiers ended up being cleared of all charges. Adams isn’t remembered for being a traitor to the American cause. Most people, without reading a book about Adams, would probably never know he defended the British in this trial. Adams is famous for being one of the greatest patriots in American history.

Adams’s loyalty to the law and the facts in this trial actually helped the American cause. It showed that Americans were not lawless ruffians who would ignore the evidence and hang soldiers out of spite.

Adams saw beyond the present moment. He was clear-eyed about man’s human nature, the need for law, and respect for law. Upholding the law would be better for the Revolution and for America in the long run. Adams’s fight for the law set him against many of his fellow Bostonians. He lost about half of his law practice. But soon the colonists understood and respected his integrity, and that unwavering respect for law cemented his legacy as one of our foremost revolutionaries and Founding Fathers.

Truth doesn’t change like public opinion does. Adams fought for the truth, and it stands true after centuries.

Ironically, the man who supposedly fought for America in that 1770 trial—prosecutor Samuel Quincy—later defected to Britain, and the man who defended Britain—John Adams—went on to become the second president of the United States of America. When you are more loyal to the law than to an agenda or to pleasing the majority, you will end up on the right side of history.

Pastor General Gerald Flurry has emphasized that God’s law is perfect, and His people must become great lawyers for God. Instead of compromising with it, we should find any little way we can to keep it more perfectly. Herbert W. Armstrong set a great example of that. No matter what the pressure is, and even if everyone hates our view, we have to stay loyal to God’s law.

Second, be loyal to the law individually. More and more, young people base their lives on their emotions, feelings, whims and passions. It is much harder to base your life on loyalty to the law. Why? Because it often requires you to go against your natural desires. Whether it’s a rule on smartphones, a dress code, a Friday night game or negative peer pressure, you have to make a decision: Will you be loyal to your own will, or loyal to the law? Be like John Adams: Decide daily to go against what is comfortable, and be loyal to the law.

John Adams looked back on the Boston Massacre trial as “one of the best pieces of service I ever rendered my country.” Who would have thought an American Founding Father would say this of his defense of the British in court? Yet it is clear today that his example of loyalty to the law put him on the right side of history. His example shows us that this loyalty ultimately brings the right kind of favor and puts us on the right side of history, both in the long term and every day.