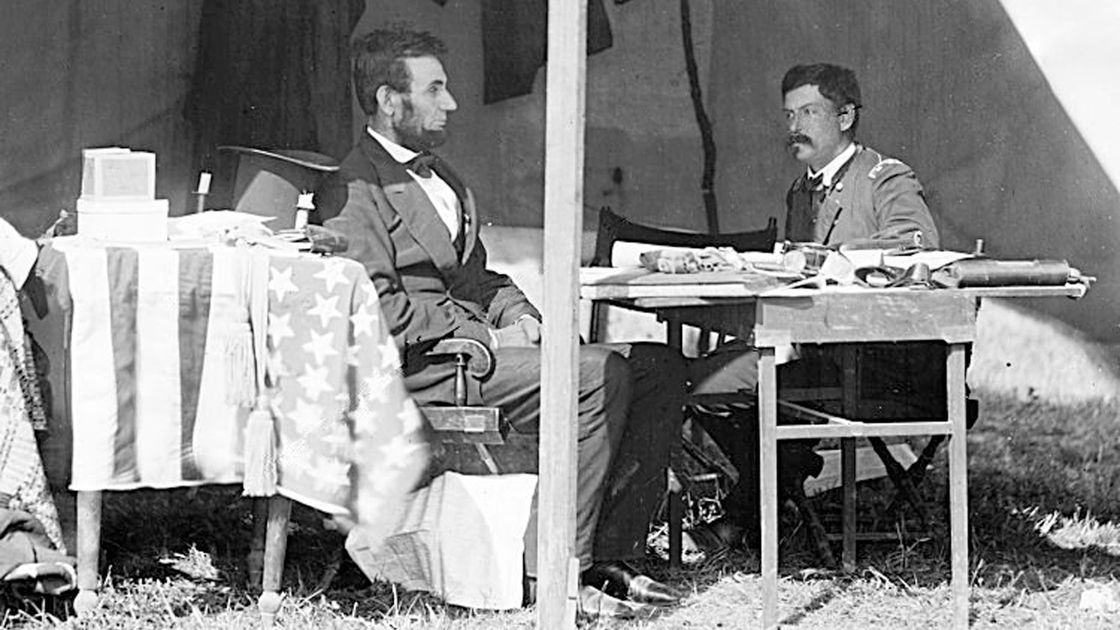 Imagine that you are the President of the United States. You are responsible for protecting the rights of millions of people, attending countless meetings, giving speeches, heading the government, and enforcing all of the laws of the nation. That’s a lot to handle. But wait, there’s more! Your nation is also in the midst of a civil war.

This was the situation that Abraham Lincoln entered in 1861. Preserving the entire union in the midst of a civil war was rather stressful. And for the greater part of the war, Lincoln received little help.

Lincoln was forced into being what some would call an “armchair general”—a term for someone who thinks of himself as an expert in military matters without any practical experience. During the Civil War, Lincoln’s actual generals would rely on the President to make their decisions for them. In reality, Lincoln wanted nothing more than to delegate the military campaign to the military experts, but their waffling natures forced him to intervene.

The source of most of Lincoln’s headaches were caused by general-in-chief of the Union army, George McClellan. McClellan was a talented and bright young graduate of West Point, finishing second in his class. When the war began, McClellan started as a low-ranking officer. After winning a few skirmishes, McClellan was promoted to take command of the lackluster Union army. Despite greater resources and manpower, the Union was repeatedly embarrassed by the more organized Confederate forces at the start of the war.

McClellan had a penchant for quickly whipping his troops into shape. Within a short time, the army under him was a far more disciplined and intimidating force than the one he had inherited. When McClellan and Confederate General Robert E. Lee clashed in the Battle of Antietam, McClellan possessed far more troops than Lee. After the battle, with his army depleted in enemy territory, Lee had to retreat. The Union took advantage of their foe’s weakness and completely overtook them, bringing the war to a swift end—at least, that’s what should have happened. Shockingly, McClellan, frightened by the thought of possibly being outnumbered, decided to stop fighting. This let the Confederates regroup, reinforce their troops, and drag on the war for another two years!

Lincoln was incensed. Frustrated by the inaction of generals like McClellan, he was disheartened and even questioned whether the Union would ever be reunited. Lincoln lamented the cowardice of his commanding officers: “What I want is generals who will fight battles and win victories.” The Civil War failed to end because no one would fight—until Lincoln found Ulysses S. Grant.

Grant was the general over a small group of volunteers in the western theater of the war. Despite a checkered past with rumors of a drinking problem before the war, Grant was collecting victory after victory. Grant was never the brightest or most inspiring leader, but he was not afraid to fight. Grant once described his strategy like this: “The art of war is simple enough. Find out where your enemy is. Get at him as soon as you can. Strike at him as hard as you can and as often as you can, and keep moving on.” That’s exactly what Grant did.

Grant captured Fort Henry and Fort Donelson in 1862, establishing his leadership as a small bright spot in the midst of many failures for the Union army.

His first major victory occurred in Vicksburg, Mississippi, where Union forces completely surrounded the Confederate supply base and commenced a siege which lasted for 46 days. 30,000 Confederate troops surrendered, earning Grant a promotion to lead the entire Union army in 1864.

Lincoln said of Grant, “He makes things git! Wherever he is, things move.” When critics implored President Lincoln to fire Grant for his past issues, Lincoln replied, “I can’t spare this man. He fights!” Lincoln was beside himself with joy that he had finally found a man that would do his job, rather than relying on Lincoln to make every decision for him. Looking back at the generals preceding Grant, Lincoln later remarked: “As soon as I put a man in command of the army, he’d come to me with a plan of campaign and about as much as say, ‘Now I don’t believe I can do it, but if you say so, I’ll try it on,’ and so put the responsibility of the success or failure on me. They all wanted me to be the general. It isn’t so with Grant. He hasn’t told me what his plans are. I don’t know, and I don’t want to know. I’m glad to find a man who can go ahead without me.” Grant’s courage made him dependable. It also took a huge weight off President Lincoln’s shoulders.

Proverbs 10:26 says, “As vinegar to the teeth, and as smoke to the eyes, so is the sluggard to them that send him.” This must have been what Lincoln went through for years. Even though he tried to give as many troops and resources as possible to his generals, they lacked the faith to use them. Instead of getting at the enemy as soon as they could like Grant, they wanted to wait until circumstances were perfect before attacking. This is a problem we can often encounter as young people. So many times we want to wait until conditions are perfect before we do hard things. But here’s a secret: Life is never perfect. If you wait until it is, you will never be a doer, but merely a dreamer.

Grant was not the smartest general Lincoln had. He was not the most well-liked either. But he had courage to fight. Mr. Flurry said in Malachi’s Message that “[I]n the Laodicean churches, spiritual courage may be the greatest need. Without it, the other virtues are of little value!” McClellan was very popular. He was nicknamed “The Young Napoleon.” But his lack of courage was like vinegar to Lincoln’s teeth.

Be courageous. Don’t worry if circumstances aren’t ideal. Be a doer. Be like General Grant.