Too Much of a Gentleman
The story of a man who risked his life for someone he had never met
By Christina Dattolo • Feb. 27, 2020 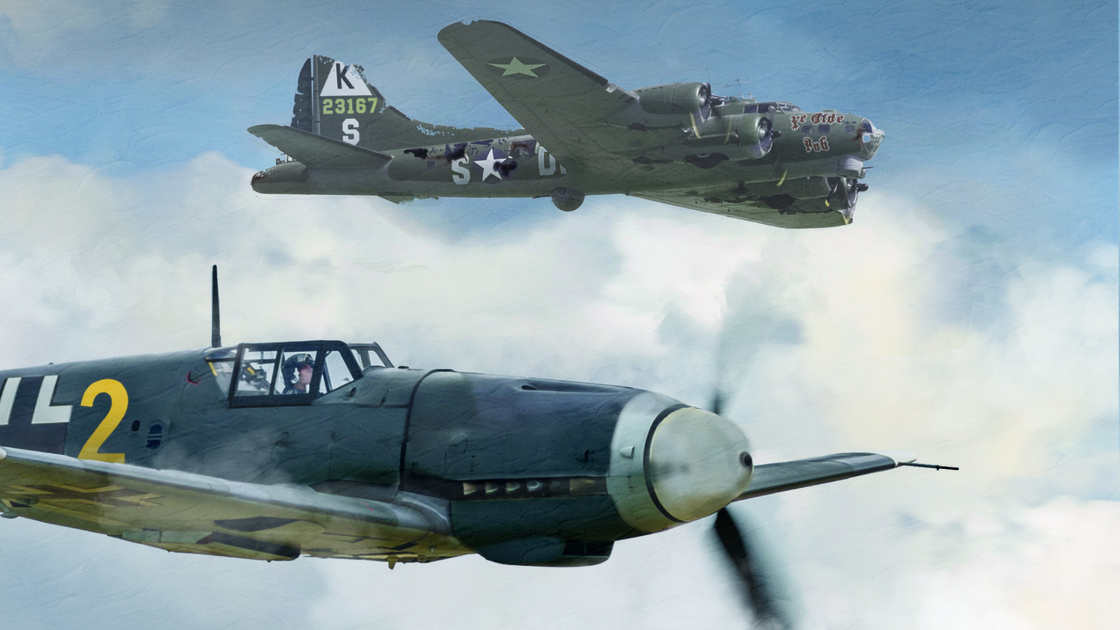 Treason. Negligence. Traitor. Execution. These and worse words spun wildly through Franz Stigler’s mind as he stared at the American B-17 flying ahead of him.

As a German Ace fighter pilot during wwii, there was nothing for Stigler to do but take down the American bomber—he had a clear shot.

Yet Franz found himself hesitating. Something was wrong. The B-17 could be shooting at him—but it wasn’t. Why? His brow furrowed in concentration.

All he had to do was press the button. And yet he still couldn’t bring himself to do it. For a moment, his mind drifted back to all that had led to this moment.

Franz Stigler had been born and raised in Germany. His father had been a fighter pilot in wwi, and Franz had begun flying at the young age of 12, along with his older brother August. He had grown to become an instructor pilot in the German Luftwaffe, the air force that Hitler illegally began building when he came to power.

Franz’s family had not voted for Hitler’s Nazi Party, and Franz was well aware that his father did not think too highly of Hitler. But he had been brought up on a code of honor and love for his country—so when war broke out in 1939 and he was drafted as an instructor for the air force, he knew he didn’t have a choice. It was his duty, and there would be consequences for declining. (In reality, there were very few fighter pilots in Hitler’s air force who were actually Nazi party members.)

One of the fighter pilots Franz had instructed was his own brother, August. He had trained his brother more rigorously than anyone else—he knew August’s life depended on it. Throughout the training, August became more and more uneasy about Hitler’s leadership. The German people were told that Poland had provoked war—not that Hitler had invaded. They were told that no one died in concentration camps—but Franz and August both knew better as the war progressed. Yet Franz was well aware of the dangers of coming forward with dissenting opinions—so he told August to be quiet. He refused to be responsible for causing his brother harm.

And then had come the news: August had died in a bombing raid. All that training—his silence—and he still hadn’t been able to save him. Anger had burned within Franz’s soul—anger at himself and anger with the war that caused his brother’s death. He had determined to leave teaching and become a fighter pilot to avenge his brother. In his mind, the enemy was to blame for August’s demise.

Franz’s mind flitted back to his first successful mission. In fighter training, the first successful mission meant the first enemy plane shot down—the first kill. He remembered the maxim that he had been taught: “You shoot at the machine, not the man.” He had heard many such phrases dehumanizing the enemy. Yet that hadn’t stopped him from throwing up after his first “successful” mission.

And it wasn’t stopping him from hesitating now. The pangs of anger he had felt over his brother’s death were warring with a sense of compassion. Compassion, he knew, was dangerous. Traitor. Execution. The words tormented him again.

Franz snapped himself back to the present and stared straight into the eyes of the gunner in the B-17 bomber just ahead of him. He could now see that there was dried blood caked across the gunner’s forehead and arms. Why doesn’t he shoot me? He has just as clear a shot as I have, Franz thought. He narrowed his eyes. His finger hovered over the button. If he shot first, he knew the B-17 would be destroyed.

Indecisively, Franz swung his Messerschmitt BF109 to the left of the B-17 to get a better look at its crew. He was shocked to notice the level of damage the bomber had sustained. The nose was completely gone, one of its compartments had been blown up, bullet holes were dotted all over its surface, and its main gun had ripped clean off. It was a miracle that it was even still flying.

What Franz couldn’t tell was where the bomber was going. It seemed to be on a trajectory to England—but in its condition, there was no way it would survive that long of a flight. It would either crash or be shot from the ground by the Germans.

As Franz pulled up close, he saw the rest of the crew. There was a very badly injured man that the others were bending over, tending to his wounds. His eyes traveled to the front of the battered aircraft, and he locked eyes on the pilot—a very young man, by the looks of it, frantically working the controls.

Franz didn’t know this then, but the American pilot’s name was Charlie Brown, and he was only 20 years old. He had padded his age to get the position as pilot. Few men knew that he wasn’t the 24-year-old he told everyone he was.

For a moment, the two pilots locked eyes. Charlie Brown was certain that he and his crew were about to be gunned down. He told his men to jump and deploy their parachutes, in the hope they might escape the German’s notice. He gripped the controls, gritting his teeth and wishing the German pilot would just get it over with.

In Adam Makos’ biography A Higher Call, he wrote the stirring words that Franz Stigler later recalled thinking at that very moment: This will be no victory for me. I will not have this on my conscience for the rest of my life.

Much to the astonishment of the Americans, Franz swung around to fly alongside them. He motioned east, but the crew couldn’t understand what he meant.

Franz groaned in frustration. He knew they had already been spotted from the ground—his only hope was that the German Air Force would recognize his bomber as one of their own and hold their fire since he was flying so close to the B-17. They would know the B-17 was an enemy craft—but maybe they would think it was one they had captured and were using as a practice flight for a pilot in training.

It worked. But Franz could see that the American pilot was still too anxious to trust him—understandably so. His eyes were nervously flickering back and forth from the controls to Franz. They’ll never make it back to England. If they would just follow me… Franz beckoned more urgently. He knew they stood a chance if they could get to neutral Sweden, just 30 minutes away. If I can just get them to fly east.

But neither the pilot nor the copilot could grasp Franz’s meaning. Franz would later find out both men had been stunned by artillery fire, and Charlie had passed out for a few minutes. His mind was so muddled when he relapsed into consciousness that, when he saw Franz, he never even thought of Sweden. He was just desperately trying to get his men home in one piece. The bomber stubbornly continued west.

Franz knew he didn’t have enough fuel to make it across the sea and bring the men the rest of the way to England. He had done all he could. All he could do was pray that, by some miracle, they would make it back alive.

Turning one last time to face the B-17, Franz again looked into Charlie’s confused, dazed eyes. He didn’t know what to do but salute—which he did. Then he left, leaving a shocked crew staring after him as he disappeared from view.

Forty-two years later, Charlie Brown—now in his early seventies, living in Miami with his wife and two grown daughters—went out with some old buddies from his war days. While swapping war stories over beers, Charlie was persuaded to finally search for the mystery German who had saved his life.

In the next four years, Charlie spent all his free time in a fruitless search for a man he had never met. Vainly he combed through records from both the American and German Air Forces, turning up no leads.

Finally, Charlie caught a break. He found the editor of a paper exclusively published for the German wwii airforce veterans, called the Jagerblatt (meaning “Fighter Journal”). He placed an ad in the paper, along with a sketch of his B-17 flying parallel to the BF109. He gave a detailed but not exhaustive account of the unbelievable story, in the hopes he would get a response from someone who not only knew the story, but also the details he had purposely left out.

A few days later, Franz Stigler settled into his chair in his house in Vancouver, British Columbia, Canada, and looked at his Jagerblatt to see who had died since the last publication. Within moments, he had started from his chair and called his wife to come look at a black and white ad that took up only a fourth of the page.

About a week later, Charlie received a letter from Franz Stigler, suggesting they meet in person. The letter contained some of the details about the B-17 that Charlie had purposely left out. On an impulse, Charlie called the Vancouver phone directory and asked for the number of a Franz Stigler. Then he picked up the phone.

A few rings later, Charlie heard a thick German accent answering, “Ja?” After nearly half a decade, he finally spoke his first words to the man who had saved his life.

In this extraordinary story from one of the bloodiest wars in history, one man risked his life for his enemy—not even his friend—someone he had never even met! Franz Stigler knew there would be consequences if he was ever found out—he knew he could be court martialed—he knew he could be killed. But he risked all that for a man he had never met—who probably would have killed him if he could have.

Franz Stigler and Charlie Brown finally met each other in Florida, 46 years after their paths first crossed. They became good friends, and remained close until their deaths in 2008—within months of one another. In fact, Charlie told biographer Adam Makos that Franz became like family to him and his former crew, still living.

Up until his death, Franz received death threats and angry phone calls from both Germany and America, once the sensational story was released and swept through the media. The words he had feared so much—treason, negligence, traitor—rang in his ears from many former soldiers and angry citizens.

Yet it was worth it. Near the end of his life, Franz wrote, “In 1940, I lost my only brother … On the 20th of December … I had the chance to save a B-17 from her destruction … The pilot, Charlie Brown, is for me, as precious as my brother was.”

Out of a brutal, cruel regime, Franz Stigler was able to rise above his anger and sorrow and do right by his fellow man—an enemy who became his brother years later. He did suffer a lot of criticism and dishonor among the ranks once his story was found out—but thankfully, he lived long enough to see that it was worth it.

Both men relived their memories to Adam Makos as he was writing about their inspiring story. Looking back on what Stigler did for him, Charlie said, “I was too stupid to surrender, and Franz Stigler was too much of a gentleman to destroy us.”