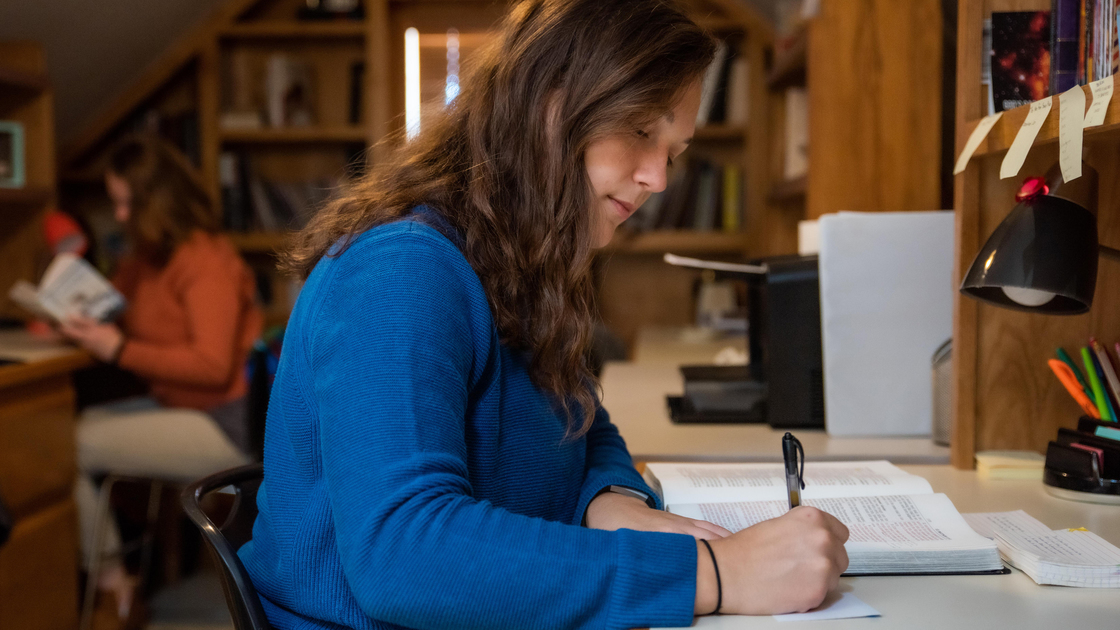 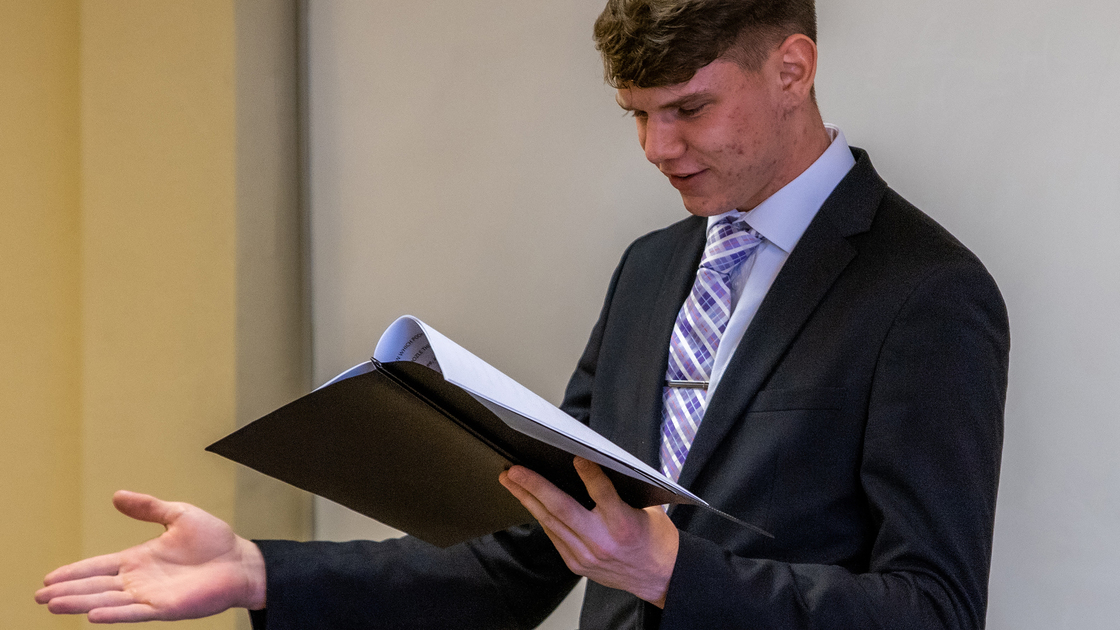 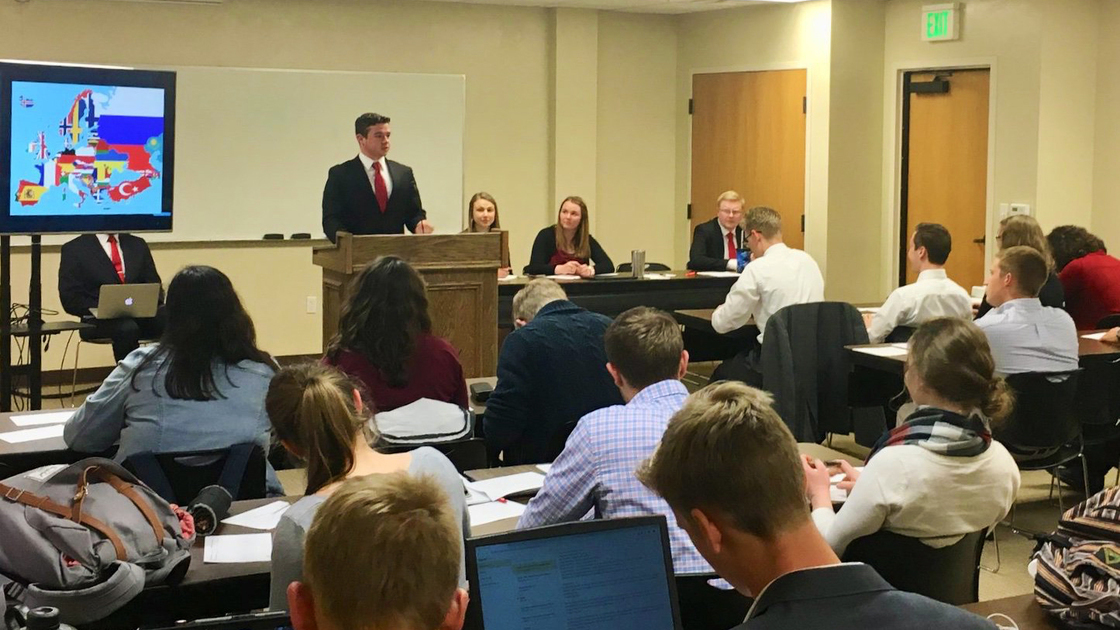 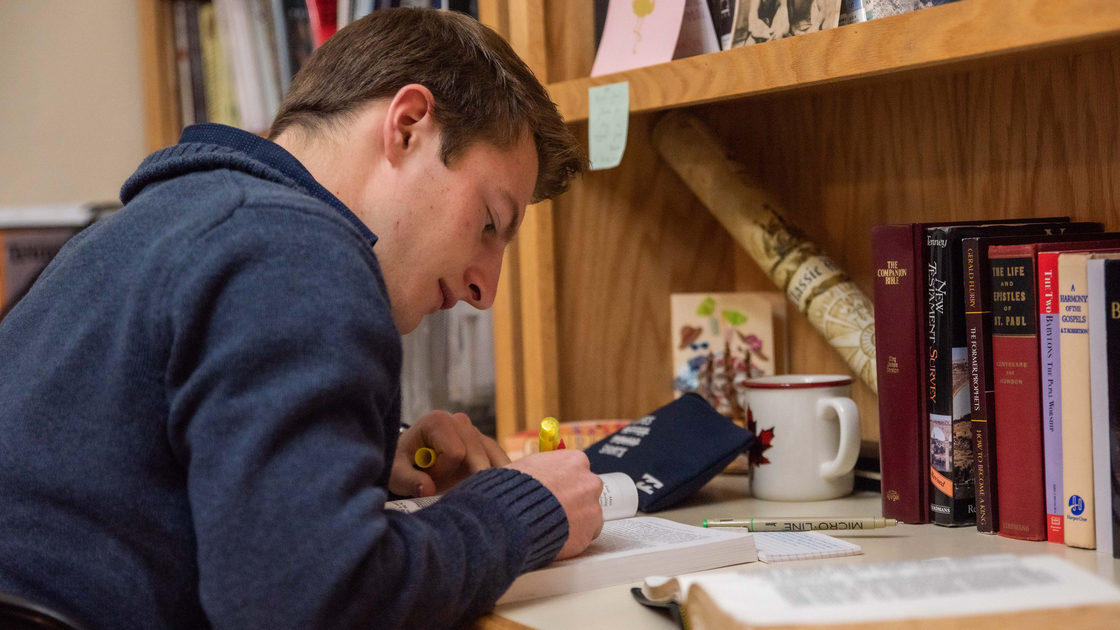 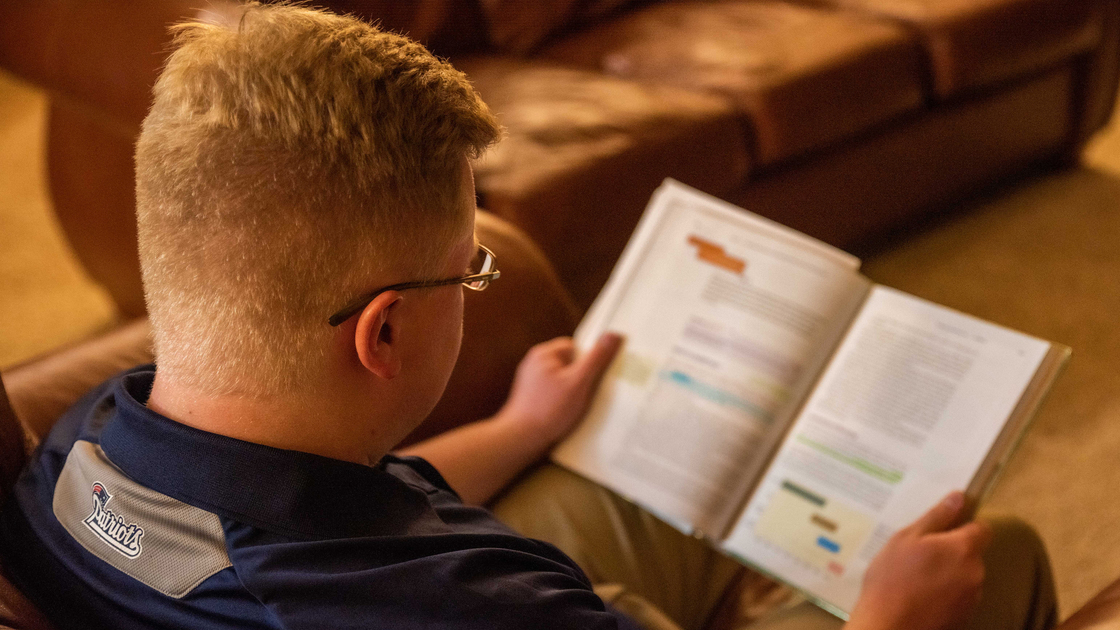 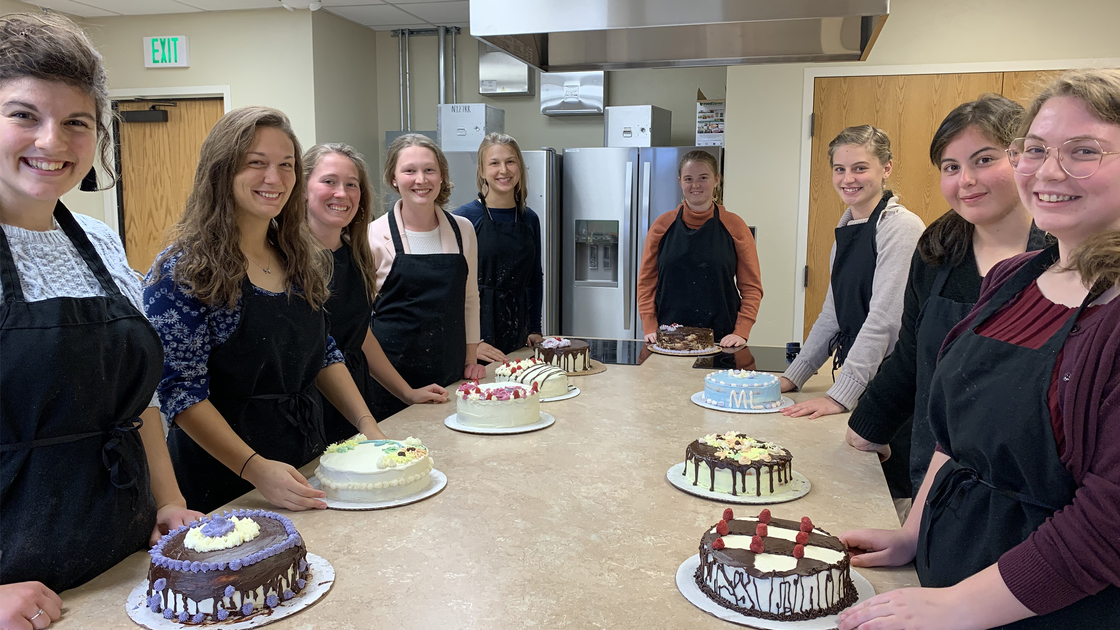 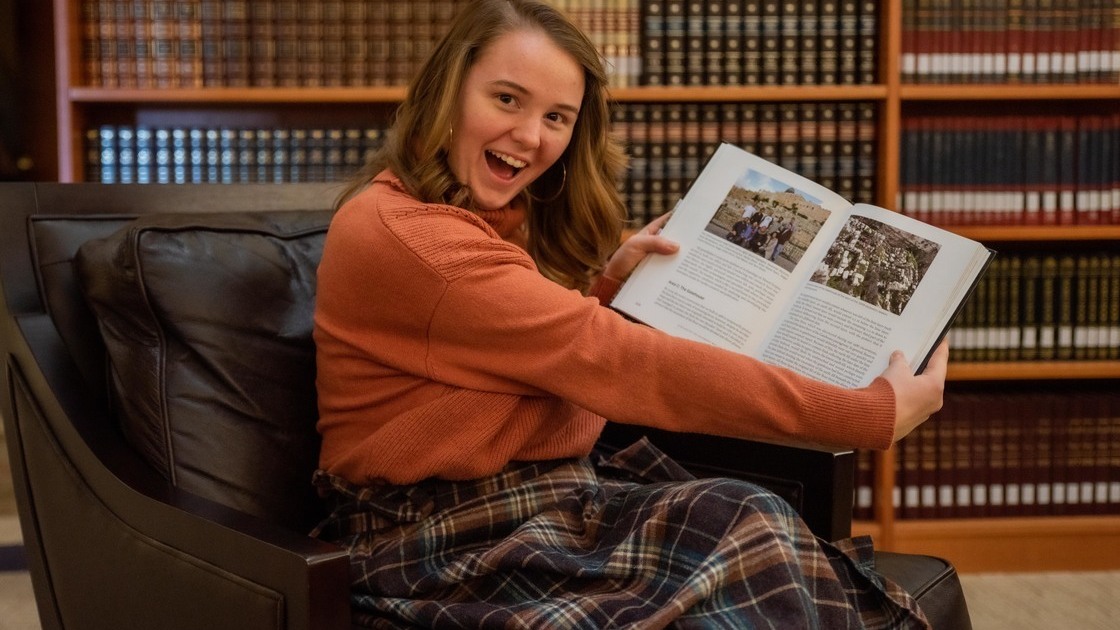 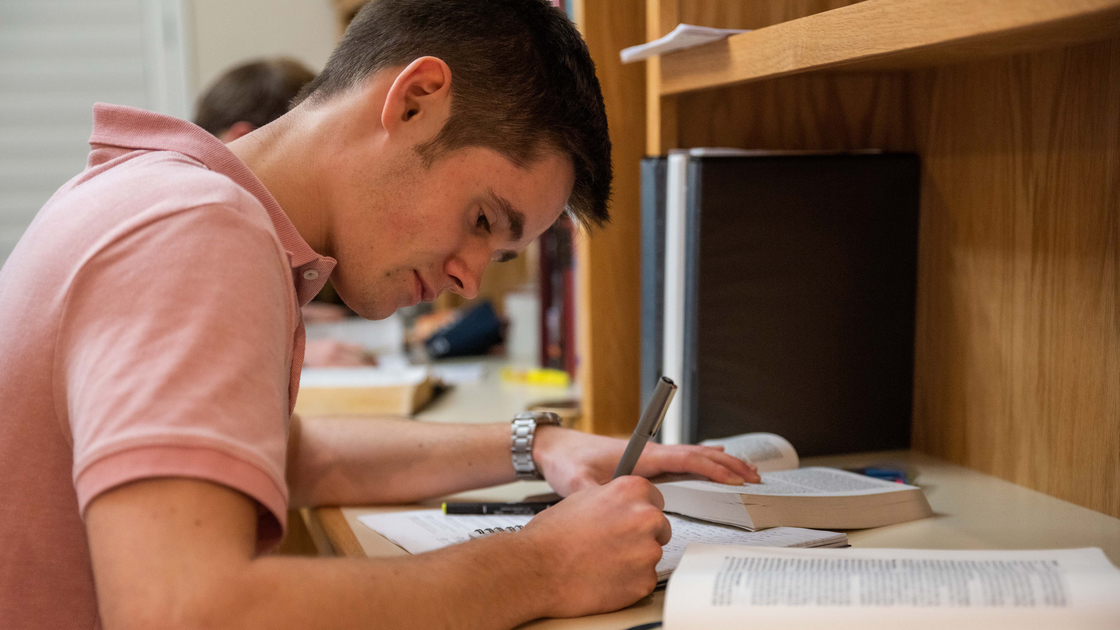 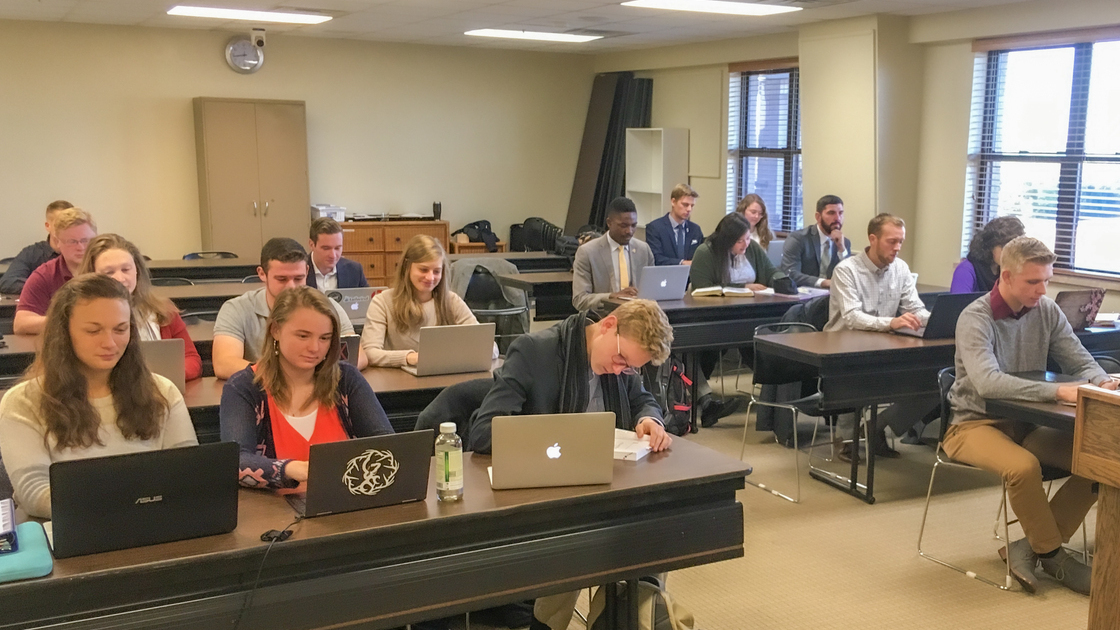 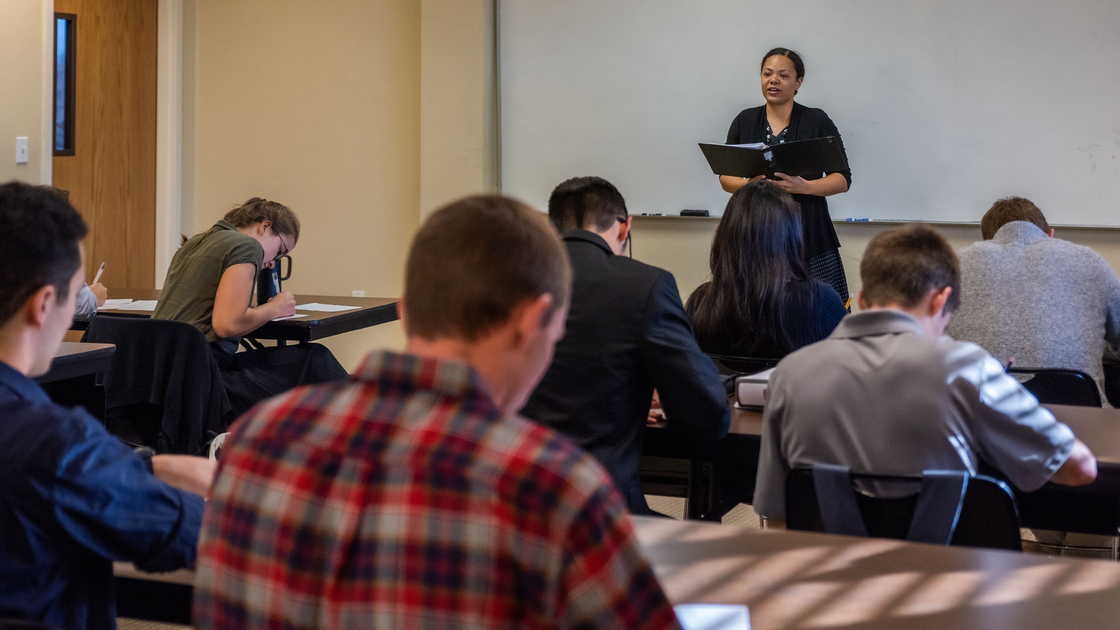 EDMOND—In Herbert W. Armstrong College classrooms this semester, students have been learning about German rationalism, Newton’s laws of gravity, proper sentence structure, how to annotate, Hebrew vocabulary, typography, the purpose of dating, scientific excavation tips, the meanings of parables, the seven hills of Rome, the Daniel 2 image and other subjects as part of their theological and liberal arts education. The Armstrong experience includes work, setups, volunteering, dating, dancing, dining, travel, sports and other extracurricular aspects. But much of the emphasis is on classroom instruction, especially during finals week.

Freshmen are studying for their first set of Herbert W. Armstrong final examinations. Reflecting on Life and Teachings of Jesus and four months of reading A Harmony of the Gospels, New Testament Survey and Mystery of the Ages while going verse-by-verse through the gospels, Josephine Osuala said, “I love the subject of Christ’s miracles, especially how He healed people with different kinds of diseases in special ways.” Simeon Zekic said he appreciated understanding the chronology and learning details about the 12 apostles to fill in gaps in his knowledge.

Preparing for the examination in Principles of Living, a course focusing on God’s purposes for creating sex, Curtis Powell said, “the lessons aren’t just for a test, they are for life.” The course uses The Missing Dimension in Sex and The Closing of the American Mind as texts and teaches that human beings need God’s revelation, the clash between science and religion and the history of the “old morality” and the “new morality.” Zekic said that it was “a real eye-opener” to study German rationalist philosophers Immanuel Kant and Martin Heidegger “and how they specifically contributed to our ‘truth is relative’ thinking.”

Meanwhile, other students have been reviewing fundamentals of grammar, vocabulary, logic and rhetoric for their English Composition examination. Elam Wilson commented “I love writing and expressing my ideas in writing, learning more vocabulary and I love [instructor Brandon] Nice’s sense of humor.”

For the one-semester course Reading Comprehension, students learned principles of annotating, principles of memorization, mind-mapping and note-taking, as well as standards for citation and avoiding plagiarism. Stephanie Moore said she learned to “actively read and annotate” and to apply the skill “to a range of other subjects and facets of my life.” Jacob Haddad said the class helped his academic and personal studying.

Students in A Survey of Western Civilization to 1648 studied highlights of history beginning in the Garden of Eden, including the promising of national prominence to the descendants of biblical patriarchs, the Babylonian, Medo-Persian, Greco-Macedonian and Roman Empires and the Treaty of Westphalia. Wilson commented that he knew that the Holy Roman Empire has had seven resurrections, but this semester learned who were the leaders of each resurrection. Tailor Santiago-Braga said she was surprised to learn how many major world events “tied in with Revelation 17 and the Daniel 2 image” and that instructor Shane Granger “really had my mind racing.”

“I really realized more how this college is preparing us to be teachers,” Ian Lexa said, “especially in speech class.” He was studying for Fundamentals of Speech, in which students learned aspects of organization and presentation and implemented them by giving speeches, and also by evaluating one another’s speeches, in addition to hearing evaluations from the instructors.

Preparations for a final of another kind have been going on away from the textbooks for freshmen and sophomore students in Physical Education. Female students have exercised with handstands, pull-ups and double-unders, and males have lifted weights, attending three weekly coached workouts of their weightlifting and Cross-Fit movements. Following a 15-minute written exam, the real test of their performance is in their improvements. Several students set new personal records, including some who lifted more than 50 pounds of additional weight. Izaak Lorenz said, “One really cool thing I learned this semester was in P.E.: It was the power of the mind.” Sophomore Olivia Alvord said the basic movements learned in workouts “build a foundation for basic life movements” and, “I love seeing the progress from one year to the next.”

As freshmen and other students reviewed suffixes in Beginning Hebrew, the Creator’s influence on design principles, and exceptions to the rules of archaeological strata, sophomores focused on the structure of the Pentateuch, ancient geography and patriarchs in Old Testament Survey, going over their notes and quizzes on the lives of Abraham, Isaac, Jacob, Moses and the people of ancient Israel at the time of the exodus. Rufaro Manyepa said the “fascinating history, highly detailed” was presented as “our family history.”

Perhaps the biggest exam of the semester for second-year students is in “Fundies,” Fundamentals of Theology, requiring students to know about 35 scriptures and answer 200 questions about the history and inspiration of the Bible, histories of ancient Israel and Judah, seven basic proofs of the one true Church of God, the Philadelphia Church of God’s legal battle to win copyrights to literature by Herbert W. Armstrong including Mystery of the Ages, and the contents of its first two chapters. Nathan Weese said, “The class digs into many parts of Mystery of the Ages that I haven’t deeply understood before” and “Perhaps the most interesting lecture for me was about Christ being our advocate, in the sense of a personal attorney. … Not to plead in the sense of compromising with law, but in the sense of asking for mercy and compassion for us.”

For Public Speaking, sophomore men studied the seven cardinal virtues of speech-making, logical arguments and fallacies, and holding a listener’s attention, and aspects of charater and leadership, such as keeping one’s word. They also gave six speeches, including interviews, persuade and presentions of famous historical speech manuscripts, as well as several spontaneous “impromptus” each. Kyle Hardin said that the focus on masculine leadership helped him “better develop the art of manliness for God.”

Sophomore women studied values and skills of womanhood in Home Economics, learned about evaluating fabrics and styles in clothing, visited local interior design and home stores to evaluate quality and value, and baked cookies, decorated cakes, made salsa and created handmade gifts. Kathleen Hochstetler said the class taught her “how God values taste and quality.” The students’ “term papers” due prior to the final exam was a binder of their own making containing photo references of decorations and furnishings and a notebook containing their class notes, handouts and recipes.

Introduction to Business students spent the one-semester course studying American businesses, learning professional etiquette and analyzing career options. Zechariah Henderson said, “One of the most helpful things we’ve done this semester has been the time we’ve spent working on our resumes.”

Students also were preparing to answer questions about Benjamin Franklin’s autobiography, Heart of Darkness and Moby Dick for their English Language Literature exam, which focuses on evaluating authors, critical thinking and personal writing sills. Seth Malone said, that instructor Dennis Leap connected being a good reader to supporting the work of the Church. He said, “Every time I leave that class, I am always inspired to read more.”

Critical thinking was exercised in a different way in Fundamentals of Physical Science, where students learned scientific history, discovery and theory from a biblical perspective, mathematics, geography, and laws of physics like Kepler’s law of planetary motion and electromagnetism. Chrissie Dattolo said, “I think the most mind-bending new thing I learned this semester was about the curved space time that Albert Einstein came up with.” One of the highlights of the semester was a cold day in a campus parking lot where the class launched model rockets, tracked them with stopwatches and simple inclinometers, and calculated their speeds and apogees.

Junior and senior students in the four-year program had a lot of the same scriptures, dates and other facts in mind, since they share the same classes. In Marriage and the Family, they learned the danger of anti-family culture, and the Creator’s purpose in making men and women different and in instituting family, as well as specifics like the five parts of the commission God gave the original couple in Genesis 1:28. Some students said that the principles are applicable not only to future selection of a spouse, marriage and family, but also to interactions within the spiritual Church family.

More scriptures were up for memorization in Biblical Prophecy, where students learned about Old Testament prophecies in Ezekiel, Jeremiah and Daniel, and their relationships to the New Testament, particularly the symbolic statue of Daniel 2, Jesus Christ’s Olivet prophecy, the book of Malachi and the modern offices of Elijah and That Prophet. Students said they have found the material exciting and feel blessed to see these biblical predictions of the future prove true.

In Doctrines of the Philadelphia Church of God, upperclassmen heard lectures on God the Father, Jesus Christ, the human potential, the Ten Commandments, sin, salvation, the Church’s commission and the truths God restored to His Church in the modern era through Herbert Armstrong. Junior Alexis Cruz said she appreciated instructor Wayne Turgeon’s emphasis on “how rare it is to know the truth and how grateful we must be.”

The doctrines of the pcg were contrasted against those of other churches and other religions in Comparative Religion, where students spent the semester surveying Buddhism, Christianity, Confucianism, Hinduism, Islam, Judaism and Taoism. Cami Eagle, taking the class at the college’s campus in England, said it made her “so grateful to know and understand God’s truth, which is so much simpler.”

Selected male students spent the semester in Advanced Homiletics, which further focuses on male leadership within the Church and emphasizes understanding fundamental Church doctrines and ability to give scriptural answers to basic questions in conversation, speaking and writing. Instruction revolved around students presenting speeches preparatory to giving basic scriptural instruction. Several said that the class focused 1 Peter 3:15’s admonishment to “be ready always to give an answer to every man that asketh you a reason of the hope that is in you ….”

Female students learned nutrition, meal preparation and dining presentation in Basic Food Study, which culminated prior to the exam with hosting a formal dinner for classmates and faculty. Callie Cocomise said the class was practical and that “it’s preparing us for our future roles and helping us see the big picture.”

In the college’s newest class, Winston Spencer Churchill: The Watchman, juniors, seniors and a number of graduates and other Church members taking the class online learned about the 20th century British statesman and Bible prophecy relating to him, including a lecture by college chancellor Gerald Flurry. Andy Inojales said that the prime minister’s example of courage and persistence “really motivated me to work hard at school and work, to never give in, even when I’m tired.”

After producing thousands of words for term papers, exerting creativity for semester projects, quizzing one another, cycling through scripture flash cards, keeping up with part-time jobs on campus and other responsibilities, and more than a couple late nights, Herbert W. Armstrong College students in Edmond and Edstone are approaching the end of fall semester final exams. Stepping back from the day-to-day for a moment, several freshmen commented that Armstrong is a “breath of fresh air” compared to public school. Others noticed that similar subjects were covered in different classes, bringing out different aspects, and that instructors were constantly trying to help their students. Older students said their experiences over the years taught them to rely on God for help, even in academics, and even for “the little things.” Seniors, now with only one more semester to go, said that they are thinking more about using their education to help support the work of the Church when they graduate and well into the future. They know that they are studying for much more than passing their exams.