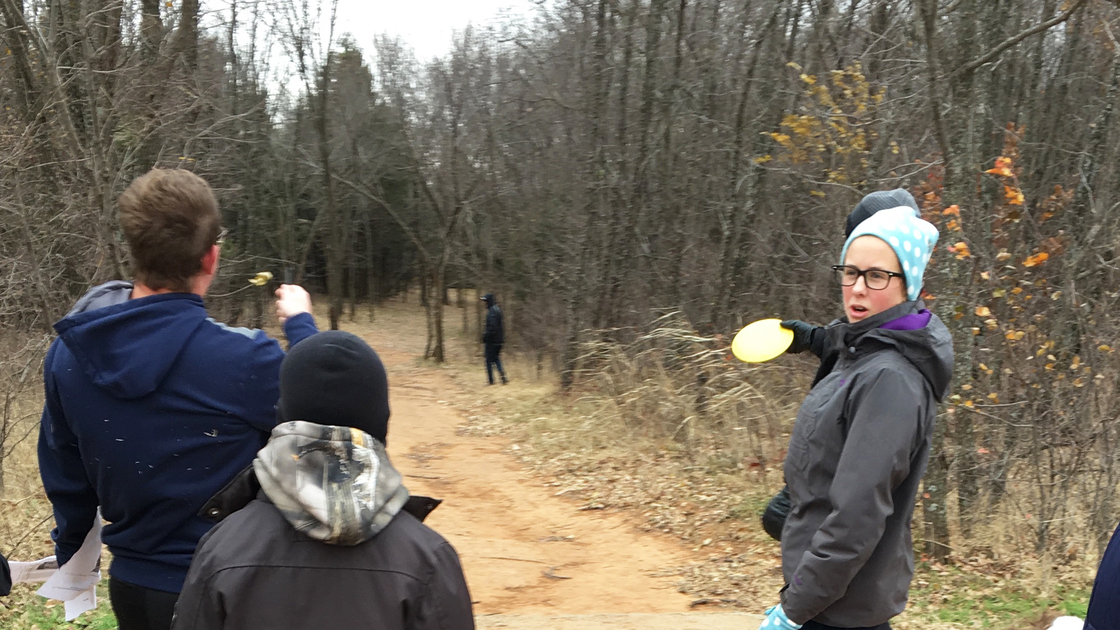 EDMOND—On the morning of November 25, 30 teens (including two visiting from Ohio) braved blustery weather for a team scavenger hunt at a local park. The bundled-up teens were randomly split into one of five groups with a parent chaperone and given one hour to find various landmarks within the 280-acre park and its 5 miles of paved trails.

As they staved off 37-degree temperatures and nearly 30 mph wind gusts, the team members searched for the landmarks and also took on other challenges that required them to take group action photos, walk through a playground backward or with their eyes closed, and preserve an egg (four of the five groups kept theirs intact). The teammates also attempted to play two disc (frisbee) golf holes. One team lost its disc due to the wind and a nearby pond and so resourcefully finished the hole by throwing a banana that it happened to have on hand.

Due to the near-freezing temperatures and wind, another substitution was made by the event organizers and Edmond Preaching Elder Gareth Fraser. Instead of outdoor ice skating, the group retreated across the street to a café for hot chocolate and other warm drinks. The event organizers notified the café employees a couple of minutes ahead of time, then 30 youths plus chaperones strolled in. After the young people finished their drinks and conversations and left the café, the two servers who had waited on the group complimented their behavior.

The activity finished with a group photo and members of Team Five, which scored 40 out of 44 points and completed the course in 53 minutes, being awarded gift cards. The Edmond teen group plans to return to the park to attempt outdoor ice skating in early January, Oklahoma weather permitting. Eggs and bananas will be spared for that event.