God’s Character In Your Clothing
Could the way you dress keep you out of God’s Kingdom?
By Gareth Fraser • Nov. 16, 2018 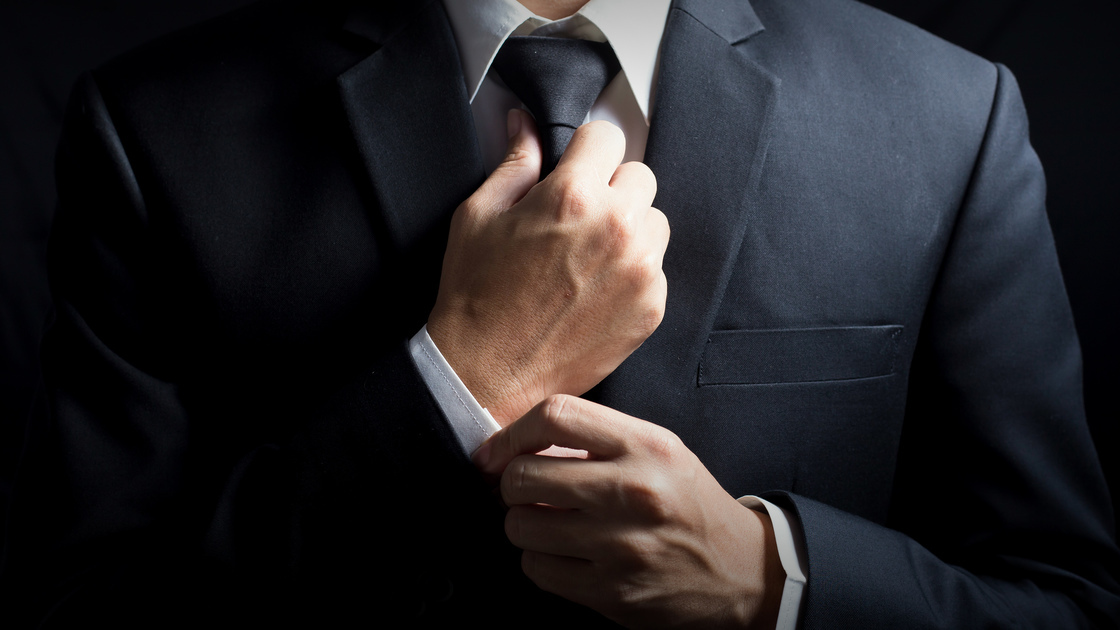 Some years ago, another minister and I visited new contacts who were eager to attend services. They were in their mid-30s and had no knowledge of the Church until they watched Gerald Flurry’s Key of David program.

As we pulled into their driveway, the husband was already at the door waving to us, dressed in a suit and tie. His wife emerged from the kitchen dressed in a modest skirt and blouse, and the aroma of a baked cake and brewing coffee greeted us when we entered their home. As we shook hands we detected soft music in the background—recordings by Herbert W. Armstrong College musicians. We walked by a bookcase full of Church literature and sat down.

I asked them why they had gone to such effort and from where they had learned these standards. The answer: Well, from the Key of David, the Trumpet, Royal Vision and literature. We asked God in prayer before you arrived what we should wear and how we should prepare to meet representatives of the one true Church.

This is one example of many who have been moved, inspired and stirred to action by God through responding to His warning message (1 Corinthians 11:1; 2 Corinthians 5:20).

Through the way we dress, we are honoring God, showing our love and respect for Him, and our cognizance of being in His royal presence.

Why are there dress standards in God’s Church? Why is a higher standard of attire required at Sabbath and holy day services, at Church activities, at Herbert W. Armstrong College, Imperial Academy and Philadelphia Youth Camp and in Armstrong Auditorium?

The way we present ourselves on the outside reveals much about our character on the inside.

The Bible specifically records that the originator of clothing is God Himself: “Unto Adam also and to his wife did the Lord God make coats of skins, and clothed them” (Genesis 3:21). God also gave specific commands for men’s and women’s clothing to be distinct from each other (Deuteronomy 22:5). He commanded that the office of His priests be partially communicated through their special clothing (Exodus 29:5-6). The Bible notes that Jesus Christ wore quality clothing (John 19:23-24). God describes the glorified Christ as wearing regal raiment (Revelation 1:13). And when He describes the majesty that He will give to Christ’s Bride, God says she is “clothed with the sun” (Revelation 12:1).

Jesus Christ established His Church almost 2,000 years ago. But He knew that over the centuries to come, much of the truth would be lost. So He prophesied that in the end time, He would restore all things through a man who would be similar to the Prophet Elijah (Matthew 17:10-11). That man was Herbert W. Armstrong.

During the 1970s, Mr. Armstrong traveled the world preaching the gospel to world leaders in fulfillment of Jesus Christ’s end-time prophecy in Matthew 24:14. The spiritual and physical standards of the Church fell dramatically. At the end of the decade, God used His apostle powerfully to put the Church “back on track” in these areas, including the aspect of glorifying God in one’s clothing.

“Are some of our members going to be kept out of the Kingdom of God because of the way you dress for Church services?” Mr. Armstrong asked members in the Worldwide News. “THIS IS SERIOUS! In some of our churches, members never think of dressing up, but come in slovenly attire, overalls, blue jeans, tennis shoes, any kind of slouchy sports clothes” (May 21, 1979).

Inside God’s Church, the 1970s’ rebellion had expressed itself, in part, through how people were dressing—in Church services and overall. Church members and even leading ministers saw the Philadelphia standard in clothing as old-fashioned, prudish, oppressive and unnecessary (Zechariah 3:3).

Mr. Armstrong wrote of a time when he and his entourage had stopped to pick up the secretary of the Israel Exploration Society on the way to meet Israeli President Zalman Shazar in Jerusalem in 1968. They were preparing to announce a joint archaeological project between Ambassador College and Hebrew University. Mr. Armstrong related what the secretary said as they were about to leave his office: “‘Wait a minute. We’re going into the presence of the president of Israel. I must wear a jacket.’ He had started with us with only a sport shirt, unbuttoned at the neck. But going into the presence of the head of state, he knew he must have on a jacket” (ibid).

This ambassador for world peace noticed clothing. Like other prominent men, he knew that it communicates a great deal about a person’s thoughts and attitude. Oftentimes, Mr. Armstrong, a man who held no public office, would be better dressed than the world leader or dignitary he was meeting! He wore clothes that were stylish yet conservative and did not attract excessive attention.

He encouraged us to dress in the best we could afford and to deeply consider that we are coming before God in His Church to receive His truth at services.

For members of God’s Church today, coming to Sabbath services in jeans or sportswear seems unimaginable. However, after Mr. Armstrong died, the Laodiceans returned to those lower standards: Many of them now wear casual clothes to their services. They willingly rejected the Philadelphia standard (Revelation 3:14-20). They have chosen the liberal worldly standard over God’s spiritual standard.

Mr. Armstrong’s writings on dress are not just a matter of opinion. God led him to establish the Philadelphia standard. The godly example the end-time type of Elijah strove to set has been revealed in this last hour as a prophetic SIGNET STANDARD for God’s final Church era to emulate. “In that day, saith the LORD of hosts, will I take thee, O Zerubbabel, my servant, the son of Shealtiel, saith the LORD, and will make thee as a signet: for I have chosen thee, saith the LORD of hosts” (Haggai 2:23).

On Dec. 7, 1989, the Philadelphia Church of God began with Mr. Flurry and John Amos setting an example of high Sabbath standards of attire, which they had been taught by Mr. Armstrong. From there, the first Sabbath had five men wearing their best suits and ties, and seven women wearing their best dresses, skirts and blouses. As the Church grew in Edmond, Oklahoma, and around the world, more and more men, women and children assembled at services in an atmosphere of recapturing the Philadelphia standard. This was apparent in how they spoke to each other, how they treated each other, and how they worshiped God, including how they dressed.

Church members who revived the Philadelphia standard did not come to services in everyday wear. They remembered and were reminded of, and instructed in, God’s standard of dress. Suits, sports coats, dresses, skirts and blouses appeared in the congregations. The Sabbath day and its commanded assembly are “holy time,” as established by God (Exodus 20:8). It is not a time for our regular weekly pursuits (Isaiah 58:13).

The Creator even uses the language of apparel to illustrate His physical leader in the final Church era. “And it shall come to pass in that day, that I will call my servant Eliakim the son of Hilkiah: And I will clothe him with thy robe, and strengthen him with thy girdle, and I will commit thy government into his hand: and he shall be a father to the inhabitants of Jerusalem, and to the house of Judah” (Isaiah 22:20-21).

In the 1970s, God’s Church began adopting the standards of society. Today, standards in society have dramatically fallen—especially since Mr. Armstrong died and God cast down Satan (Revelation 12:9, 12). This means we must emphasize even more what we wear, as well as when and why. Our clothing standards reflect our submission to God and His government (Hebrews 13:17).

Different attire is needed for the Sabbath, formal events, casual visiting, manual labor and active pursuits; all have their proper place and time (Ecclesiastes 3:1). God is watching us. He knows our thoughts and motives (Psalm 33:13-15; Hebrews 4:12).

God requires us to raise our standards to match His regal Philadelphia standard. Mr. Flurry writes, “You and I, of all people, must uphold the standard of God’s throne, spiritually! If we are baptized members in God’s Church, we have the Holy Spirit, and we must show the world, as much as we possibly can, how things will soon be around God’s throne on Earth!” (The New Throne of David).

The charge God has set before us is not impossible, for with God all things are possible (Matthew 19:26).

Looking at this subject spiritually will inspire and motivate us to raise our personal standards in pursuit of God and His regal example.

Woman Clothed With the Sun

God the Father inspired His Son to record how He views the Church as His Bride.

“And there appeared a great wonder in heaven; a woman clothed with the sun, and the moon under her feet, and upon her head a crown of twelve stars” (Revelation 12:1).

“Here’s quite a woman! She is clothed with the sun, has the moon under her feet and a crown of 12 stars—all kinds of brilliant light! And the time setting is right now. If people can see spiritually, there is a woman who is clothed with the SUN—led by the Lion of Judah, a type of Jesus Christ—they have all this light, all this revelation” (The Royal Book of Revelation).

What glory God offers His true Church! Looking at the sun, moon and stars means so much to Christ’s begotten Bride. This is out-of-this-world royalty. It all relates to God’s majestic throne and royal Family.

God has called us to reflect His royalty just as a Bride is dazzled by her husband’s eyes—so we are dazzled by God’s radiant splendor and earnestly desire to follow His example.

Take time to think before we clothe ourselves our way, rather than God’s way (Isaiah 61:10; Revelation 19:8). We have a vital personal responsibility in dressing according to God’s well-established standard. Doing so helps ensure Christ’s Bride fulfills Revelation 19:7-8: “Let us be glad and rejoice, and give honour to him: for the marriage of the Lamb is come, and his wife hath made herself ready. And to her was granted that she should be arrayed in fine linen, clean and white: for the fine linen is the righteousness of saints.”

Sidebar: Christ Not Indifferent to Dress

Jesus spoke of the Kingdom, when the dead in Christ shall rise first, and we who are then alive shall be caught up to meet the returning glorified Christ in the air. Then, descending to the Mount of Olives, will follow the great wedding between Christ and the Church. Jesus’s parable spoke of this.

Jesus pictured His Father as a great King calling many people to the wedding with Christ. But many or most of those called made light of it, gave excuses, rejected their calling and salvation. The King then sent His armies to bring in others. “And when the king came in …, he saw there a man which had not on a wedding garment:

“And he saith unto him, Friend, how camest thou in hither not having a wedding garment? And he was speechless. Then said the king to the servants, Bind him hand and foot, and take him away, and cast him into outer darkness …” (Matthew 22:11-13).

Of course, in the parable Jesus was using garments we wear as symbols of righteousness or of unrighteousness. The lack of a wedding garment symbolized unrighteousness. Nevertheless, Jesus would not have used this symbolism if He was indifferent to how we come dressed into His presence! When you come to Church services, you are coming into the very presence of God!

Brethren, it does make a difference to God how you come dressed to Church services!

I know God expects me not only to inform you brethren, but so far as possible, to set you an example.

So let me ask you, have you ever seen me come to a Church service improperly dressed? I don’t believe you have.