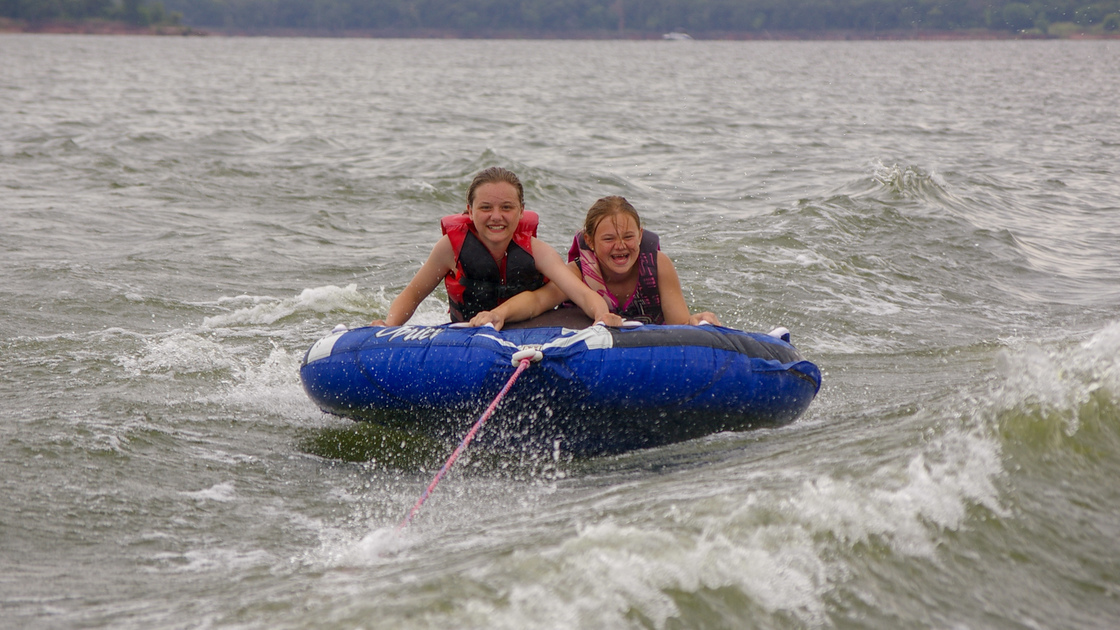 Each year at pyc, the campers have an opportunity to travel off campus for an activity. This year, campers went to Lake Arcadia for a day of water skiing, knee boarding, tubing and relaxing on the nearby beach.

I had the wonderful opportunity to go on the trip with 6G. After breakfast, we filled a 15-passenger van with food, water and campers, and then we headed off into the great unknown toward the mighty Lake Arcadia. The ladies excitedly chatted among themselves and sang the “Cha-Cha” song—which went “Freeze! … Everybody clap your hands,” followed by a chorus of clapping—every time we came to a stop sign.

When we arrived, we were greeted by Mrs. Howard, our water ski instructor. She had us split into four groups—one group to go out with her on the boat and the other three groups to walk down to a nearby beach and relax until it was their turn to go out. I stayed in the boat most of the time to take pictures and watch the campers ski.

The first three ladies, Michaela, Jenna and Sophia, were excited to give water skiing a try. But before we went anywhere, Mrs. Howard reminded us all to put on some sunscreen. It was cloudy, but clouds don’t prevent sunburn. The clouds also meant that I didn’t have the best lighting for pictures, but it was great to not have to wear sunglasses!

Each group was given about 30 to 40 minutes on the boat—enough time to try skiing a few times before moving on to knee boarding. None of the ladies in the first group got up on the skis, but Sophia successfully got up on the knee board, stabilized herself, and was able to go for a bit.

Knee boarding is much more involved than it sounds. To get up, you must start out on your stomach. Then, once the boat starts moving, you have to slowly work your knees onto the board and under a black strap before strapping in and grabbing the handle. It’s quite the task because the board wobbles so much in the process, and the boat is practically going at the speed of light. Sophia threw her hands up in the air in celebration once she got up.

The next group—Hali, Skye, and assistant counselor Heidi Rodis—was a bit more successful: Skye was able to get about halfway up on the water skis before falling. Although Hali couldn’t make it up on the skis, she was able to get up on the knee board and ride for a bit, leaning from side to side as the boat pulled her along.

At one point, Mrs. Howard and the ladies in the boat sang the “Jaws” theme song as we circled around one of the campers in the water. We were giving her the rope so she could try again, but adding a possible (however improbable) shark attack to the mix made it much more fun.

The groups continued switching between boating and relaxing on the beach all the way until lunchtime. Kamren was the only one to get fully up on the water skis, but all the ladies seemed to enjoy giving it a shot.

Lunch was packed sandwiches, chips, granola bars and apples, all provided by the kitchen staff. Everyone talked and laughed together while we munched on our lunches.

After the lunch break, 6G counselor Alexa Turgeon got really close to getting up on the skis, but she couldn’t quite make it. She was successful on the knee board, however.

The next activity was tubing. I was just planning to stay in the boat and take pictures, but Miss Turgeon talked me into tubing with her—and I’m so glad she did. Watching the campers bouncing and laughing on the tube was great, but actually doing it was a blast. The turns gradually got sharper and faster as Mrs. Howard tried to get us to fall off—and on one particular turn that sent us flying, she succeeded.

After that tubing adventure, I decided to get off the boat and spend some time with the campers on the beach. Some lay in the sun, which had finally peeked out from behind the clouds, and others swam in the murky water. At one point, Hali found a rock that reminded her of an avocado. Then she dropped it, and it was never to be found again—the water was simply too murky to see anything. It felt great, though, especially as the day warmed up.

Once all the campers had gone tubing, Mrs. Howard pulled the boat up to the dock, where the rest of the dorm was waiting, and we said goodbye to her before piling into the van once again. Traveling along, the ladies sang several more verses of the “Cha-Cha” song on our way back to campus. We pulled up to the Field House just as the last dorm was heading into the dining hall for dinner. The girls jumped out of the van and sprinted into the Field House, through the long line of high-fives from the workers, and toward whatever activities the evening had in store for them.