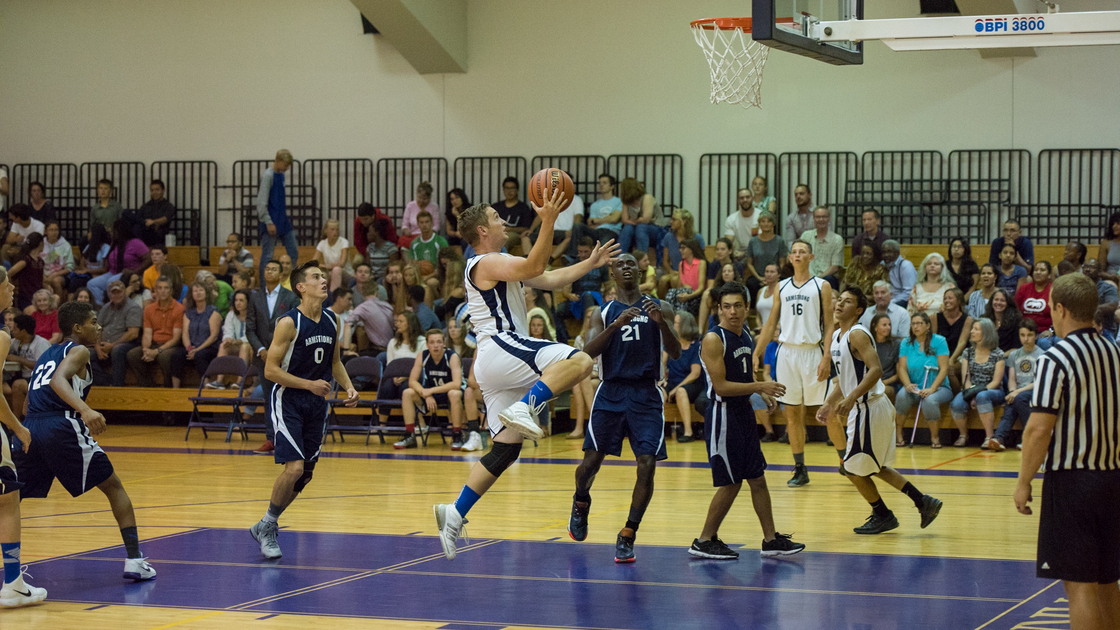 On the first full day of All-Stars, campers and workers were out on the soccer field bright and early for the first game: girls’ soccer. As I watched the ladies warm up for the game, I couldn’t help but notice how beautiful the weather was. It wasn’t too hot or windy—a pleasant morning for the players and the spectators alike.

After they had warmed up and gone over positions and strategies, the two teams, differentiated by yellow and blue pennies, lined up along the field for the national anthem. Everyone in the audience stood up too, and some sang along.

Team yellow tried several times to score a goal, but blue’s goalie, Christina of 5G, would not let them. Similarly, blue tried to score, but the goalie, Vanessa of 4G, was not afraid to move away from the box and send the ball back downfield to her teammates.

Despite both teams’ attempts, the defense was impenetrable, the score stayed locked, and the game ended 1-0, blue.

The next game, boys’ soccer, also started with the national anthem. Then the boys ran to their benches on the other side of the field to get water. The commentator for the game, Matthew Kawalek, said, “Looks like a bag of M&Ms and Skittles over there.” Indeed, it was a colorful sight, since each dorm had a different color shirt and there were campers representing every dorm. Then the campers put on their teams’ respective pennies, and the cacophony of colors quieted down to just two: blue and yellow.

At the beginning of the game, team blue just missed a goal when Micah of 6B overshot and the ball flew over the top goalpost. The goalie kicked the ball downfield, and Peter of 2B ran after it. He took a shot for the yellow team, but one of blue’s defensive players, Zach of 1B, blocked the shot.

Another defensive battle ensued, and it was some time before team blue finally scored. To answer that, yellow scored a goal off a header by Jordan of 1B. Commentator Kawalek had a quick discussion with spectator Jude about the game: “I think the team that scores the most points will end up on top,” said Jude. “Nice job, captain obvious,” said someone in the audience.

Meanwhile, Peter of 2B got the ball again and scored another goal for yellow. When half-time was called, yellow was in the lead, 2-1.

At the beginning of the second half, Jesse of 5B took a shot for team yellow, but it was blocked by a header from Sam of 2B. Next, Micah got the ball and put up a shot for team blue, but the ball went too high once again. “Five push-ups, Micah!” yelled 6B counselor Justice Brown from the sidelines, and Micah dropped to the ground to complete his counselor’s command.

Yellow scored three goals fairly quickly after that, making the score 5-1. The game ended with the same score.

While the boys were tearing it up on the soccer pitch, the girls were tearing it up on the basketball court inside the Field House. The boys’ soccer game ended minutes before the girls’ basketball game, so I rushed to the gym and walked in with less than a minute left on the clock. Team Welsh had the ball, and team Chi was playing hard defense. The score was 30-29, team Chi. With about four seconds on the clock, Gianni Welsh, coach of team Welsh, called a time out. He gave his team a game-winning strategy, if only they could pull it off.

Everyone stared intently as team Welsh set up the final play. Could they win the game with a buzzer-beater bucket?

Team Welsh passed the ball into play and the clock started once again. Point guard Shannah of 6G received the ball and drove up the side of the key for a layup. The ball made a long, slow, beautiful arch toward the basket, and it looked like it was going to go in. But at the last second, the ball seemingly changed its mind and fell on the outside of the hoop. Then the buzzer went off, leaving team Chi victorious.

After three well-played and entertaining All-Star games, the campers headed into the cafeteria to eat lunch and recharge for the afternoon’s activities: an all-camper dodgeball tournament and formal dance.