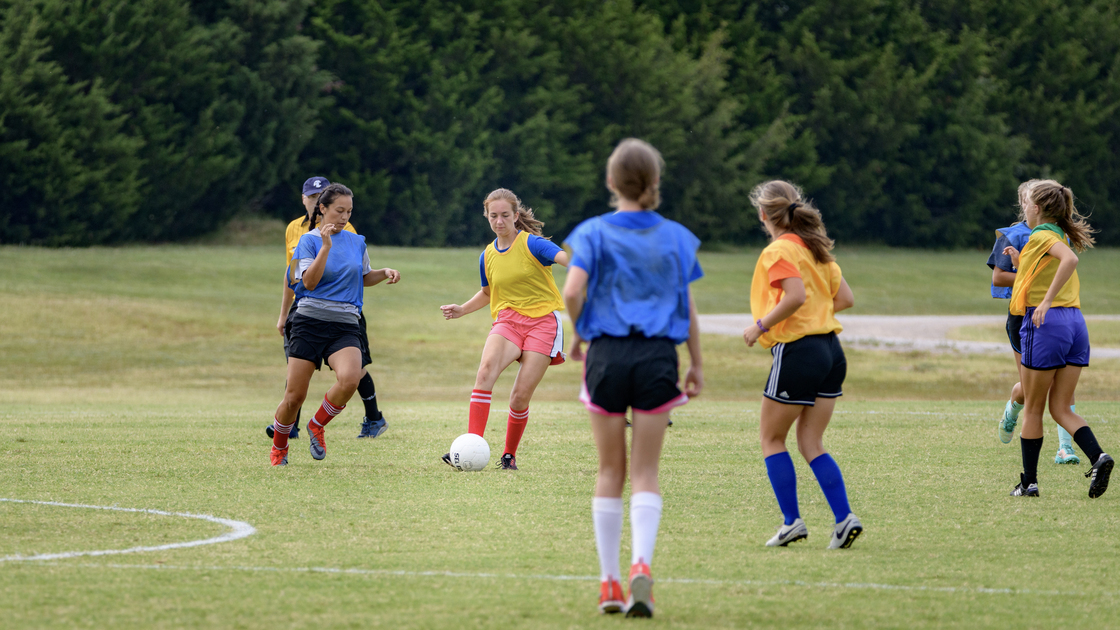 Minutes after kickoff, the gray team scored a touchdown. They did not gain the extra point, and the ball was given to orange. Team orange made a long pass down the field, and Micah of 6B, a member of the gray team, tried to intercept it—but couldn’t quite wrap his hands around the ball. After he dropped it, he dropped to the ground to do push-ups as a self-inflicted punishment for his failure. Orange continued downfield before quarterback Jordan of 1B made a great throw to Zeke of 5B, who caught the ball and ran right into the end zone. They also gained the extra point when Sam caught the ball in the end zone on the next play. This brought the score up to 7-6, in favor of orange.

Next, the gray team scored another touchdown when quarterback Micah ran the ball all the way into the end zone. They successfully got the two-point conversion, which brought the score to 14-7, in favor of gray.

This game was impressive to watch as the guys showed their athleticism and agility on the field, juking and running the ball up and down the field—and scoring a lot of points in the process. Orange didn’t stay down for long, scoring a touchdown and a successful two-point conversion on a Jordan-to-Zeke connection once again.

The score proceeded to climb in similar manner—one team scoring and the other team answering—until team Cocomise, in gray, brought the score up to 21-20. Then gray proceeded to score two unanswered touchdowns, and the game seemed like it was over. Just when all hope appeared to be lost, however, orange scored a touchdown on a connection between quarterback Trenton of 2B and Jordan of 1B, who had sprinted down the field to receive a deep pass. After that, team orange intercepted the ball, and it looked like they were going to make a miraculous comeback. They were unable to score another touchdown, however, and the game ended with a score of 40-27, team gray.

With the flag football All-Star over, the campers and staff made their way inside the gym for the next and final All-Star sport of the evening: volleyball. The commentator for the game was track and field staff member Matthew Kawalek. He announced the teams: team Welsh, coached by assistant volleyball instructor, Gianni Welsh, and team Hochstetler, coached by the head volleyball instructor, Daryle Hochstetler.

The first game went by fast, ending with a score of 21-17, team Welsh.

In the second game, team Hochstetler was down 2-11 at the time out, and the score kept rising for team Welsh—team Hochstetler could just not break the serve. When team Hochstetler finally scored a point, the crowd went wild, and Micah of 6B stood up and yelled. The score was 20-3. Shannah of 6G served next for team Hochstetler, but because the serve did not quite make it over the net, the game ended with team Welsh winning 21-3.

While the teams took a water break, pyc Director Wayne Turgeon ran in front of the crowd, encouraging us to be more enthusiastic. The wave started as he ran back and forth from one side of the bleachers to the other, and we all cheered as loudly as we could.

Most volleyball matches are best three out of five, and team Welsh had already won two. Thus, when the third game started, all eyes were glued to the court. Would team Welsh sweep the board for the victory, or could Team Hochstetler fight back?

By the third game, both teams were warmed up and playing at their highest level. Team Welsh had some great plays. One such play was a save that just barely dropped the ball over the net and scored a point. Team Hochstetler had some great plays as well, and Micah cheered loudly and waved his shoes in the air above his head when they scored a point.

The fourth game was intense. Team Hochstetler had several great plays and great saves, earning an early lead, 5-3. Team Welsh fought back, however, and the score rose in their favor: 16-12. When team Hochstetler finally scored again, 6B counselor Justice Brown, Micah, Aaron and Wyatt of 6B cheered hysterically. Everyone seemed to be cheering for the underdogs.

Team Hochstetler scored a point, making the score 15-19. At this point, Micah pretended to have a heart attack, and Mr. Brown revived him. Another person, who was actually injured, waved his crutch in the air in excitement.

The game ended with a victorious team Welsh, 21-15. Micah stood up, his mouth hanging open, completely dumbfounded. Despite this reaction, it did not take him long to recover and lead the crowd in another wave. Little six-year-old Brooklyn also ran in front of the bleachers, and the crowd responded by doing a wave for her too.

The teams high-fived each other and cheered before the campers lined up and went back to their dorms for some rest before the next day of All-Stars.