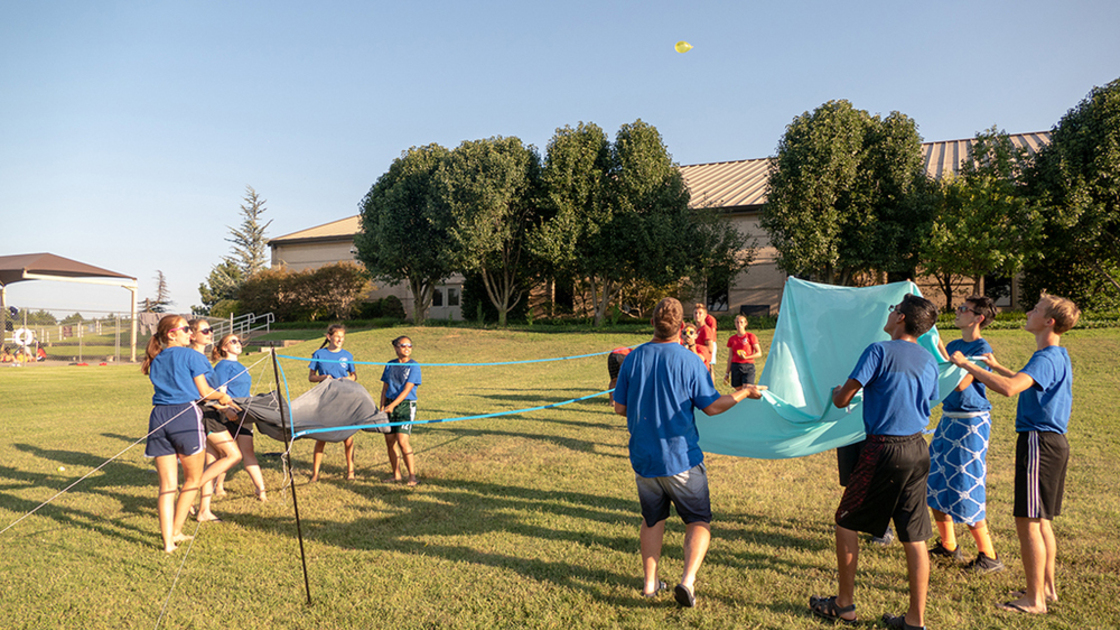 On July 23, day 13 of pyc activities, dorms 3, 4, 5 and 6 had Etiquette Dinner and Faculty Home Visits. But for dorms 1 and 2, it was all about Wacky Games. I helped some workers set up for the event while others cooked dinner. We filled water balloons, set up the obstacle course, and untangled a badminton net—all before the campers arrived. The campers came prepared—dressed in swim suits under their normal camp clothes. They knew they were in for a wet evening.

Since everyone was hungry, we ate dinner first: burgers, potato chips, salad and watermelon. After eating and digesting for a bit, the games began. The campers were split into four teams of ten, with brother and sister dorms mixed together. Each team headed to one of the four stations: an obstacle course, water balloon volleyball, the sweatpants challenge and musical hot potato.

At the obstacle course, one camper was blindfolded while another teammate directed them down the brutally difficult course. I say this because there were random tennis balls in the grass as well as several pvc pipes placed willy-nilly around the course—obstacles that were almost impossible to avoid. The campers had several seconds added to their time each time they bumped into one of the obstacles. And it got even more intense: If the course itself wasn’t hard enough, the onslaught of workers spraying the blindfolded camper almost non-stop with water made it almost impossible. At the end of the course, the frazzled campers had to reach into a bucket, grab a soaking sponge, and throw it into a kid-sized basketball hoop—a feat that would’ve been a piece of cake had they been able to see the bucket, the sponge or the hoop.

Upon switching activities, some campers were directed to the water balloon volleyball station. They were split into two teams—five on each side of the net—and each team was given a bed sheet. They had to use the sheet to catapult the water balloon over the net, where the other team had to catch it with their sheet. The team to pop the balloon lost the round. Since each group went through several balloons, I was recruited to help fill up more water balloons. The workers filling up the balloons kept turning on each other, throwing balloons at each other or just taking the water hose and spraying people. Several truces were called, but of course, they did not last very long.

The next two activities took place on the pool deck—a strong indication about the amount of water involved in these games. The first game was musical hot potato. The campers sat in a circle and tossed a sponge full of water around while the music played. Once the music stopped, whoever last touched the sponge was eliminated. When it got to the last two campers, water flew everywhere as the sponge was hurled between the two of them with great fury, neither one of them wanting to be the last person to touch it. No matter what, the campers were completely soaked.

Next, the campers were split into two teams for the sweatpants challenge. In this game, each camper had to put baggy sweatpants and a baggy sweatshirt on over his or her swim suit and traverse the width of the pool in the shallow end. Once the camper got to the other side, he or she had to quickly take off the wet sweats so the next person could put them on and race back across the pool. After a couple of swims, those sweats got really heavy, and the campers slowed from racing pace to about the speed of snails. All the while, workers were standing on the pool deck, soaking the determined campers even more with water guns. The team to rotate through all of their players first won.

After going through all of the stations, the campers were called together for one last challenge: the Oreo Face Challenge. In this challenge, campers had to place an Oreo on their forehead and move it into their mouths—using only their face muscles. After having limited sugar for the past two weeks, the campers were ecstatic at the chance to eat an Oreo. They eagerly and enthusiastically volunteered for the job.

Once the last person had tried (and failed, for the most part) the Oreo Face Challenge, it was time for free swim. The campers splashed around in the pool, jumped off the diving boards, and practiced their water polo shots. I headed back to the dorm to the sounds of laughter and cheering as the campers enjoyed the rest of their Wacky Games.