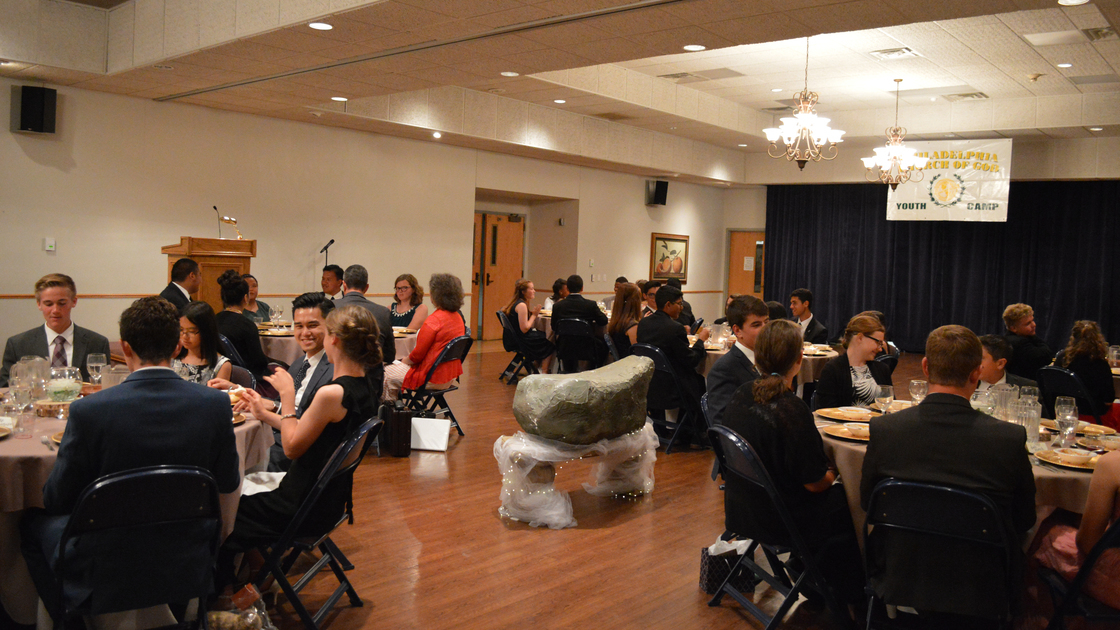 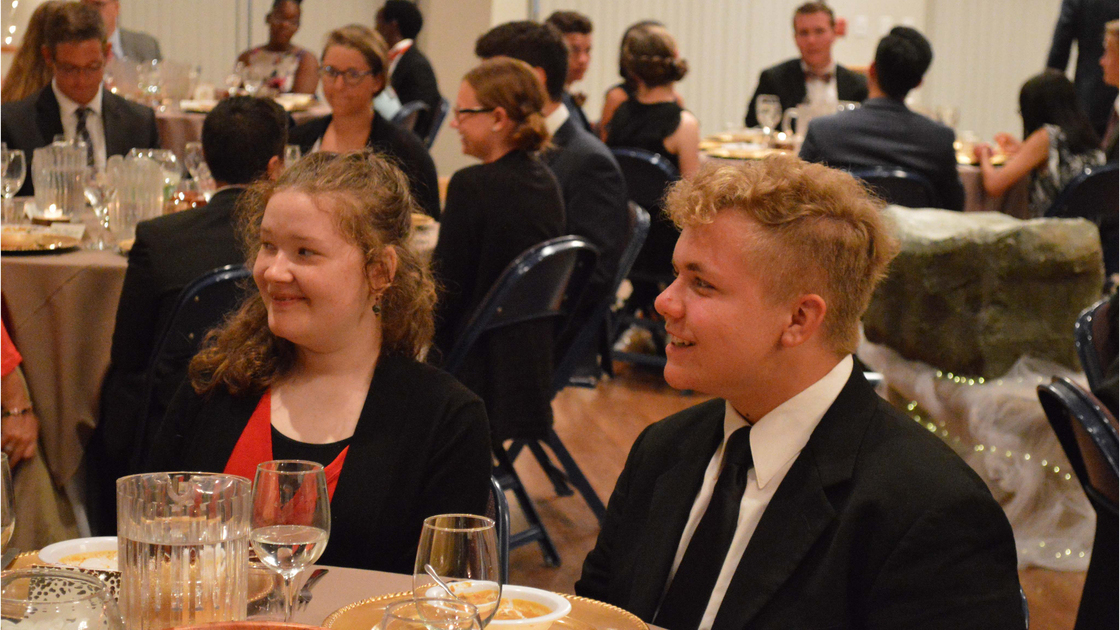 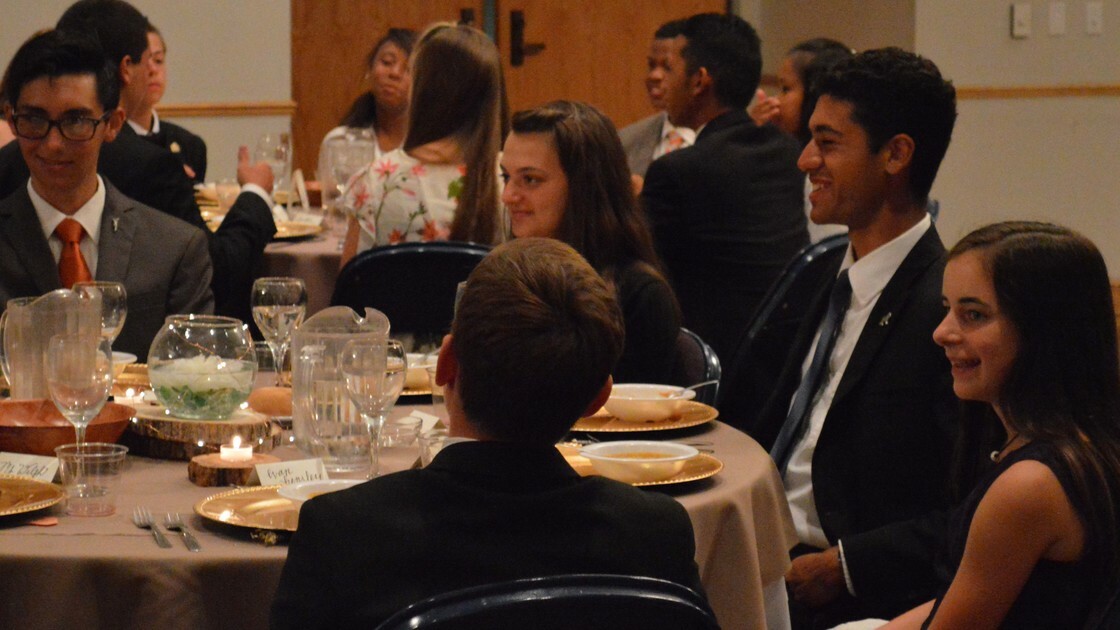 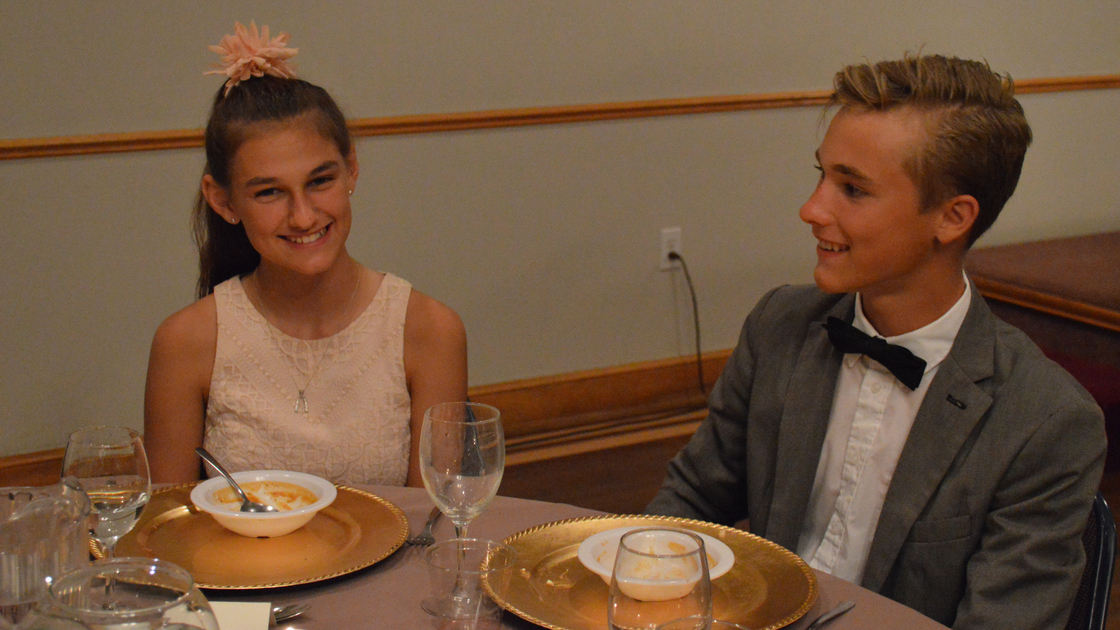 Etiquette Night is a yearly pyc tradition that gives campers the opportunity to learn and practice the protocol for dining in a formal setting. There are three Etiquette Nights each year, and four dorms are present at each one. This year, local elder Roger Brandon and his wife presided over the Etiquette Night I attended, and the dorms present were 2G, 2B, 4G and 4B.

When I walked into the dining hall, the first thing that I noticed was a replica of the prayer rock. It was sitting in a bed of white tulle, greenery and flowers. A photo booth was set up in the corner of the room, and the tables had white, green and silver tablecloths with woodland-themed accents. The normal dining hall had been transformed into a room fit for royalty.

Mr. Brandon started the evening by asking a blessing on the food and recognizing the kitchen and wait staff. Then, Mrs. Brandon went up to the podium and explained the various rules of proper etiquette as we ate the appetizer: cheesy spinach and artichoke dip with pretzel crackers, carrot sticks and bread slices. Yum!

Mrs. Brandon finished the rules of etiquette as the second course was brought out: a spinach salad topped with strawberries, Parmesan, pumpkin seeds and strawberry vinaigrette. As we ate, our table discussed what IA is like as opposed to public school. Before we knew it, the third course was on its way: kabocha and butternut squash soup with a yogurt-and-pumpkin-seed garnish. The soup reminded me of autumn in a bowl; it was so deliciously warm and comforting.

The main course was an absolutely delicious beef pie served with sautéed green beans and mashed potatoes, which were garnished with Turkey bacon. As we ate this course, Mr. Brandon made his way up to the podium for the topics portion of the evening.

After admonishing the nervous, first-time campers to answer questions early—the questions only get harder as the night goes on—he started with the question: “What was the funniest moment for you at this camp?” Several hands went up. Trenton of 2B said the funniest moment at camp was watching one of his dorm mates fall off his bike. Gabe, sitting at the same table as me and decked out with a lot of bandages from a recent bike crash, was astonished. However, another guy from 2B had also recently fallen off a bike, and he was equally flabbergasted. Trenton never clarified which dorm mate he was referring to.

Another question was, “What part of the Work party was your favorite or the most inspiring?” Campers mentioned that seeing the new stone and the Ezekiel Temple model was very inspiring, and several said that the Seals of Isaiah and King Hezekiah Discovered exhibit was their favorite part.

Dessert—vanilla and mud-slide chocolate ice cream with a chocolate crown and a chocolate dipped mint leaf—was served as the topics continued. Mr. Brandon asked, “What will your parents notice is different about you when you go home?” Zeb from 4B said he hopes his parents will notice that he is no longer late to things. He mentioned that when he or someone else was late in the dorm, they had to do burpees or other exercises. Alexander, also from 4B, said that he hopes his mom will notice the new morning schedule he wants to implement.

When the night was almost over and every camper had answered a question, the kitchen staff came around with sparkling cider for the toasts. Mr. Brandon started out by explaining what toasts are—telling us that a toast is not just a burnt piece of bread left in the toaster too long—and how to properly give one. Victoria of 2G gave a toast to her counselor, Cathryn Bancroft, for being so kind and sweet. Dance instructor Jacob Bancroft gave a toast to all the counselors, and 2B counselor George Haddad gave a toast to all the campers, mentioning how special they were in God’s eyes, that God really loved them, and that He wanted them all to be at pyc.

To finish off the night, Mr. Brandon gave a toast to the Kingdom, to which everyone cheered and clinked their glasses. Afterward, the campers huddled over by the photo booth to take pictures while some workers and campers broke down the tables to begin setting up the dining hall for tomorrow’s breakfast. By the time the campers headed back to their dorms, the dining hall looked normal again—the only traces left of the royal evening were the memories held by each camper.