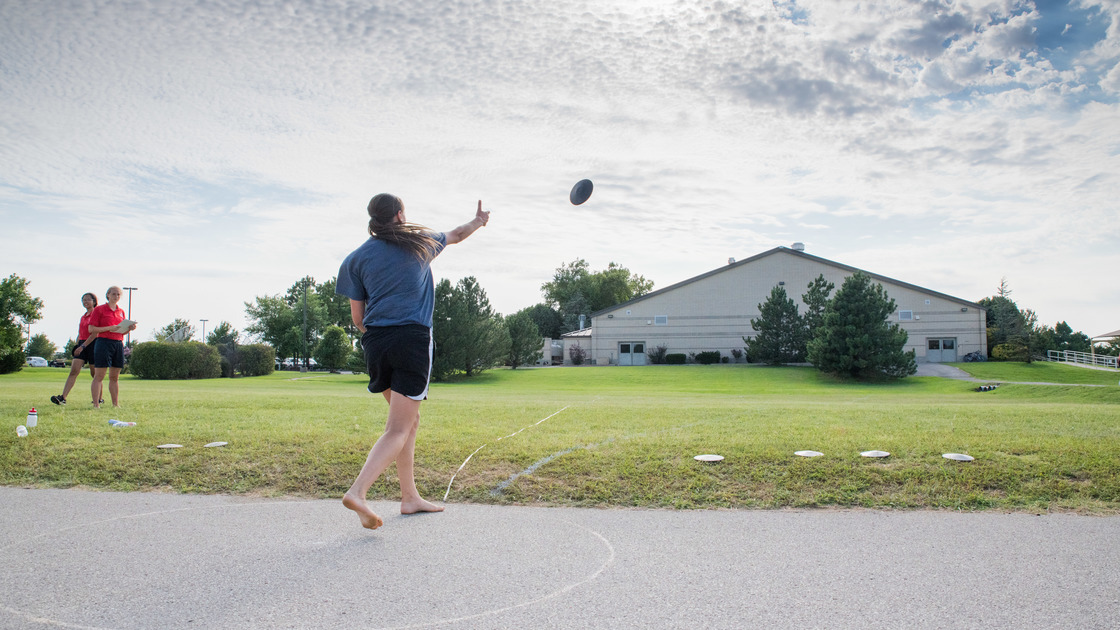 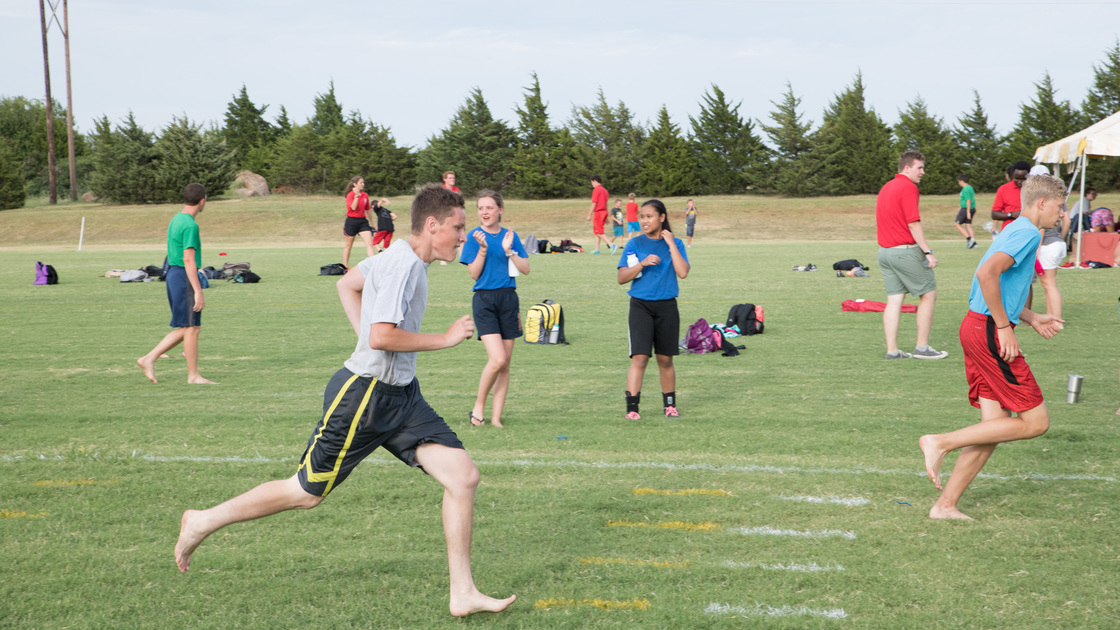 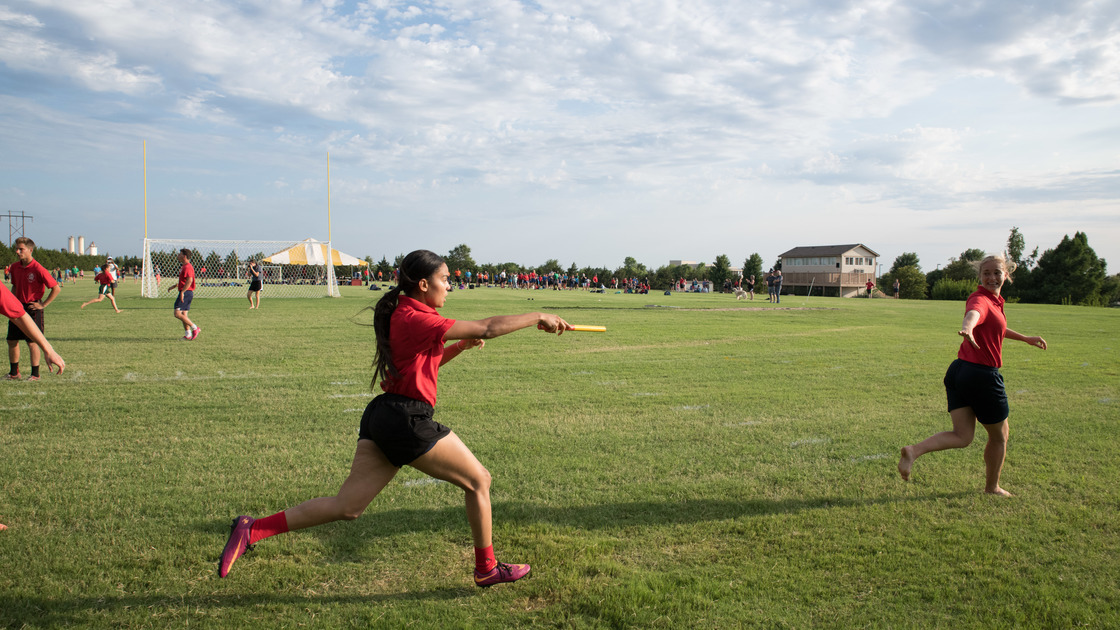 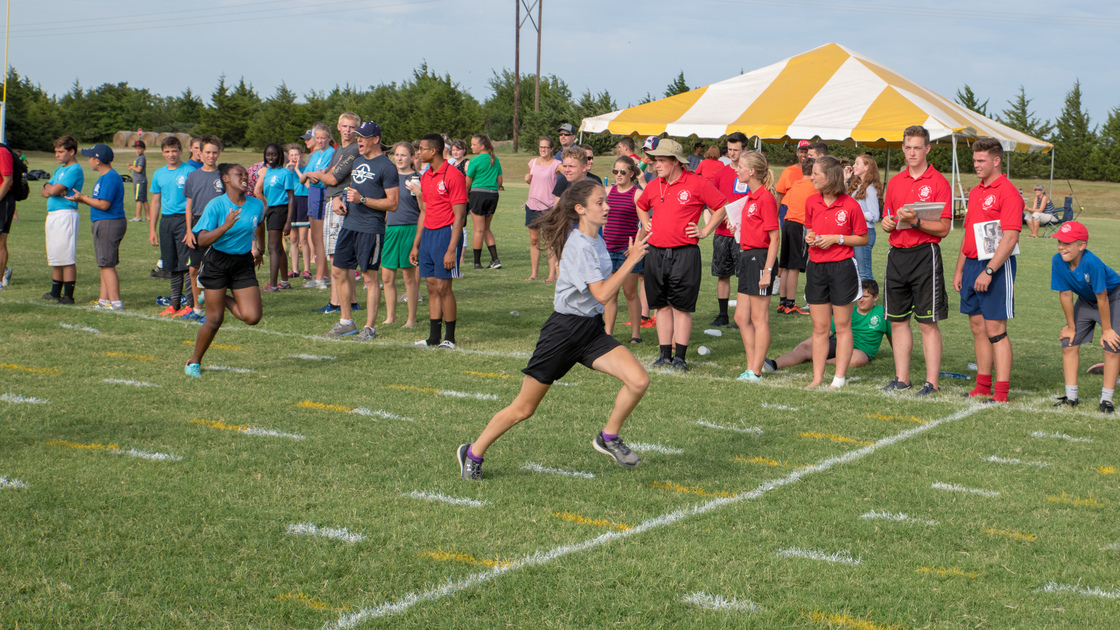 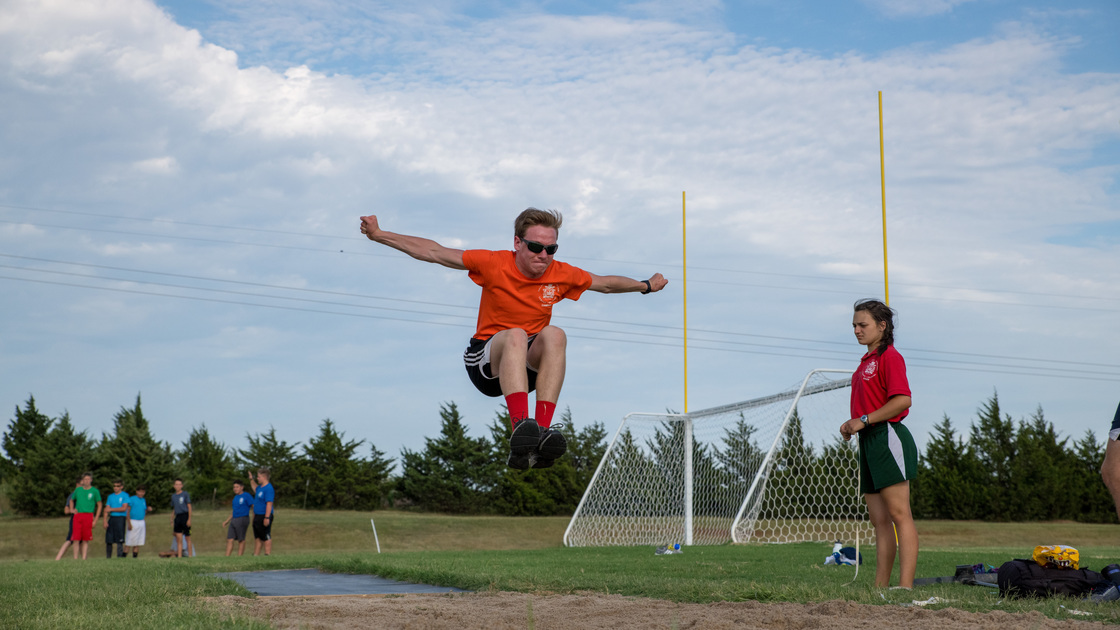 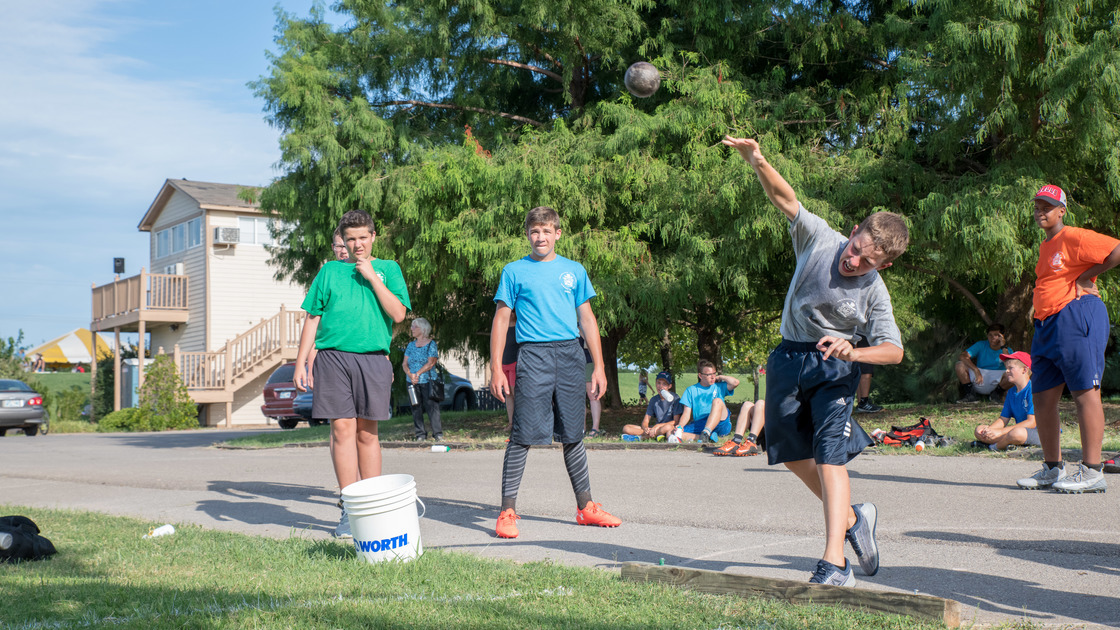 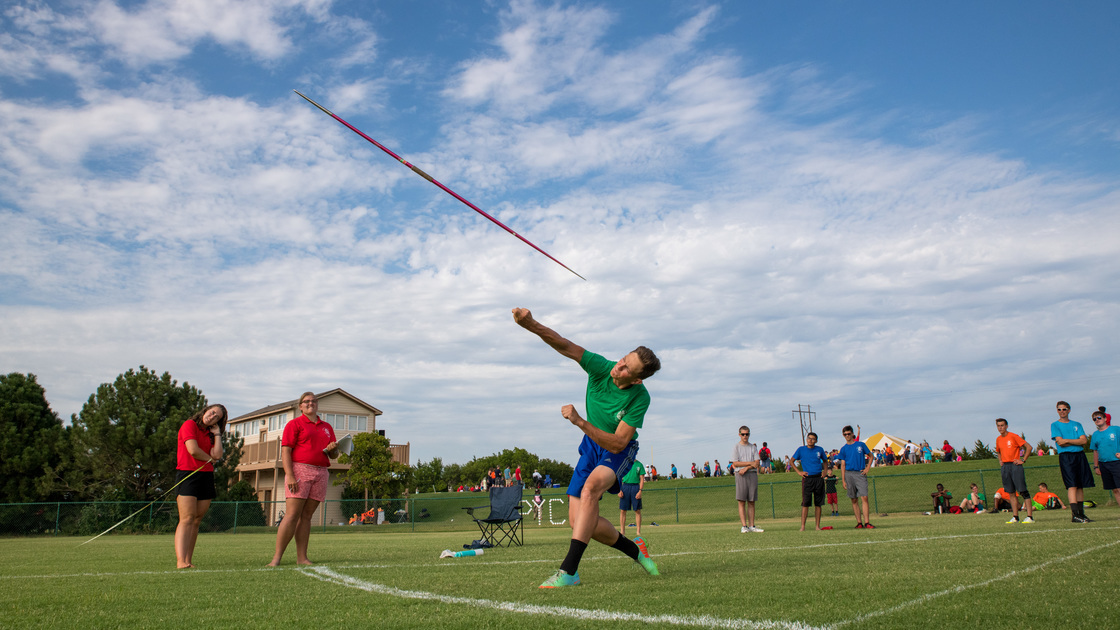 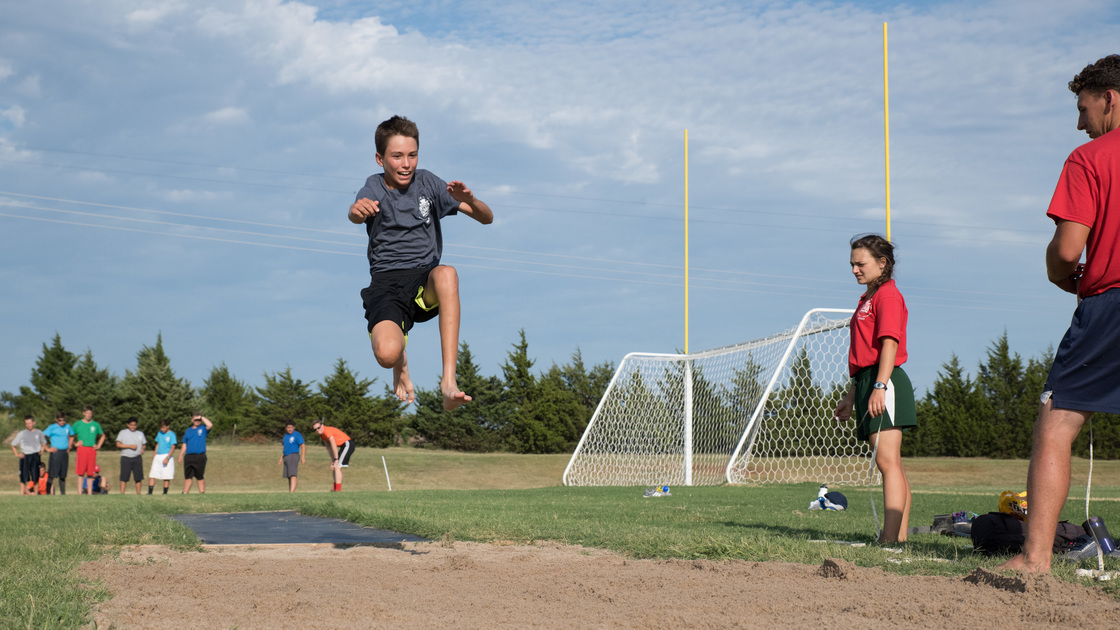 Upon waking on Sunday, July 22—the morning of the annual pyc track meet—campers and staff found overcast skies and temperatures in the 80s. It was perfect weather—especially for the first activity of the day: the mile run. While the rest of the track meet would take place in the afternoon, the mile was first thing in the morning to take advantage of the cooler temperatures.

The race was scheduled to begin at 9 a.m. The girls took off first, and the boys started 30 seconds behind them. Over 20 campers participated in the race, and all of them finished. David of 3B won the boys’ race with a time of 5 minutes 29 seconds, and Ellie of 5G won the girls’ race with a time of 7 minutes 20 seconds. After the run, campers and staff made their way to the John Amos Field House for breakfast and then went through a day of activities.

A little before 5 p.m., the campers met on the soccer field to stretch and eat peanut butter protein bars before the track meet began. I could hear 4G’s counting across the field as they stretched. At 5 p.m., the campers were split into age groups and went around to their assigned stations. Each age group rotated around to every activity: long jump, javelin, shot put, discus, 40-yard dash, 100-meter run and 400-meter run.

At the long jump, headed by track staff member Gavin Fraser, campers excitedly chatted as they took off their shoes and formed a long line. They waited about 10 yards or so from the sandpit—just enough room to work up to a sprint before jumping as far as they could into the sandpit. In the group I watched, most campers averaged about a 9-foot jump. Some went way past that: Mitchell of 4B jumped a whopping 15 feet and 10 inches—the furthest of the guys—and Ella of 6G jumped the furthest of the girls, with a leap of 13 feet, 4 inches.

Javelin was headed by track staff member Carleigh Blanchat. Miss Blanchat commented that while no records were broken, “we had some really good throws.” Dylan of 5B came the closest to breaking the record, throwing the javelin 97 feet and 6 inches. It wasn’t quite enough to topple the whopping 119-foot record, however.

At the shot put station, headed by track staff member Daniel Di Santo, I watched as a big group of campers took turns hurling the heavy, metal cannon ball. Mr. Di Santo noted that everyone was enthusiastic overall. Several of the campers wanted to throw just for fun. No one broke any records, but the farthest throws came in from Micah of 6B—34 feet and 8 inches—and Christina of 5G—23 feet and 3 inches.

When I arrived at the discus station, track staff member Matthew Kawalek told me that “discus was absolutely amazing.” He mentioned that there had already been some “head-fall-off moments,” which I took as meaning that there had been some pretty spectacular throws. He also said that there were times when his “jaw [dropped] at the amount of effort.” I think he might have been just slightly pleased with how it went. I would be too, since two records were broken that night: Christina of 5G, with a throw of 71 feet and 3 inches, and Micah of 6B, with a throw of 92 feet and 2 inches!

At the 40-yard dash, Hali of 6G got the fastest girls’ time: 5.86 seconds. Jordan of 1B got the fastest boys’ time: 5.05 seconds. In comparison, I think it takes me about five seconds to realize that I should be running after the word “Go!” is uttered, so these two campers definitely blew right past me.

One of the most intense races to watch was the 100-meter run. 100 meters is short enough to sprint the whole time and long enough to be completely exhausted at the end. I watched in amazement as the campers furiously sprinted down the length of the soccer field.

The longest of the evening track events, the 400-meter run, was fantastic as well: Ella of 6G broke a camp record, running the race in 1 minute and 13.88 seconds.

After all of the campers rotated through the stations, everyone gathered in the middle of the soccer field to watch the relay races. The women’s race was first up. There were eight teams all together—a counselor team, a worker team and all six girl dorms—and each team had four runners. 3G was the first of the dorms to finish, with a time of 1 minute and 5.31 seconds, and 1G came in second. Cami Eagle, the last runner of the worker team, said that “it was exhilarating” to run so hard and fast. It was exhilarating (and just a tad less exhausting) for us spectators to watch, too.

Shortly thereafter, the men’s relay race started, and the workers quickly took the lead with the counselor team right behind. Among the campers, 3B came in first with a time of 55.56 seconds, 4B came in second, and 2B finished third. 5B counselor Harvey Powell said that running in the race “felt amazing,” and 6B counselor Justice Brown, the last runner of the counselor team, said it was “a hard-fought race.” Indeed it was, with the runners coming in relatively close to one another.

Once the relay races were completed, the dorms grouped together in brother-sister dorms and sat in circles around the field. The prize we were all looking forward to that night arrived in a maroon-colored van that drove onto the field: stacks and stacks of pizza!

While the campers munched on their pizza and watermelon, various AC students and volunteers who had been designated as specific dorms’ aunts and uncles arrived with all kinds of goodies for their niece and nephew dorms. I had the opportunity, as the aunt of a dorm, to charge the field with a gallon of chocolate milk in one hand and cups in the other. Two other workers ran with me, also carrying milk. After some fellowshipping time—and with bellies full of ice cream, fruit, pizza and other delicious food—the campers headed back to their dorms for some much-needed sleep.

A couple of days after the track meet, the results came in. First-and-second-place winners received gold and silver medals for their efforts, and once all the points were tallied, the overall 2018 pyc Track Meet Champions were announced: 3B and 5G!