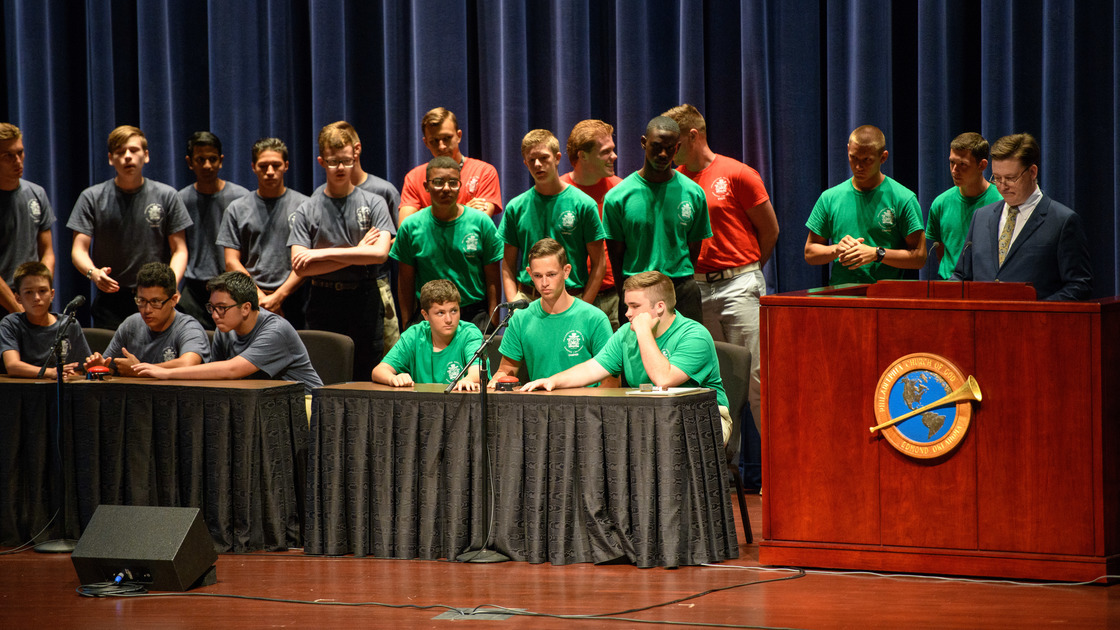 The well-known Space Odyssey theme song played throughout the theater as the first four dorms—1G, 1B, 2G and 2B—made their way on stage. The crowd applauded as the dorms sat at their respective tables. Then a hush fell over the room as everyone anxiously awaited the commencement of the 2018 Bible Bowl.

Bible Bowl host Mark Jenkins broke the silence by listing several facts about the Bible—facts like how many books, chapters, verses and words it contains—and then said, “And I plan to test you on all of it.” He then explained how the game would work. Four dorms would go on stage at a time and compete in four rounds—one whiteboard round and three buzzer rounds.

Dorms one and two were close in scores during the whiteboard round until the question: “Which scripture is first in time order?” was asked. The two guy dorms pulled ahead by getting the correct answer: John 1:1. Keeping up their lead through the buzzer rounds, dorms 1B and 2B had the highest scores in the first group.

During round four for each group, I had to go and gather the next group of dorms. The sound was not turned on outside of the theater, so I missed a lot of the questions and comments. Assistant counselor of 2G, Eva Hochstetler, filled me in on the “Zadok” comment that so many people referenced after the Bible Bowl was over. Apparently, one camper from 3G had pushed the buzzer after hearing “Which priest stayed loyal to David when David’s first son rebelled …” and confidently, loudly and immediately said “Zadok.” Mr. Jenkins then finished the question, “… but then turned against him when David’s second son rebelled,” showing that she was incorrect. Jacob of 1B told me he liked how Mr. Jenkins would wait for the echo to stop and then calmly say “that is incorrect” to each wrong answer—crushing the hopes and dreams of each answering camper.

After all the dorms had cycled through, the four finalist dorms were 1B, 2B, 3B and 6B. For the first time since I can remember, the four dorms to compete in the final round were all boy dorms!

Some dorms were especially ready to go onstage—their counselors and assistant counselors discussed strategic formations while they waited. A few of the guys from 1B later told me about their “extreme strategy,” as Nick called it: They let Micah of 6B and Scott of 3B battle it out in the second round and then put Jordan—the “MVP” as they called him—in the third round to “sweep it up.” 6B’s Micah said, “We were tantalizingly close to taking it all,” but Jordan came in and “sniped them.”

As the finalists walked on stage, the well-known introduction to the “Lion King” rang out through the Auditorium. The tune put a smile on the face of every camper I could see backstage. The dorms walked majestically onto the stage, and Mr. Jenkins gave each camper a high-five.

1B’s strategy worked marvelously—they ended up being the victors in the end, for the second year in a row. 6B was not far behind, and 2B finished in third, which pleased them greatly.

Several campers and workers commented on how well the Bible Bowl went this year. 2B’s assistant counselor Caleb Heerma commented that “There was a good balance between Bible trivia questions and questions from camp lectures.”

“It was a lot of fun,” said Sofia of 5G, “They were all trying hard, and they all had good attitudes.”

After the Bible Bowl, the campers walked outside the Auditorium for fellowship by the Swans in Flight before heading back to their dorms to get some rest.