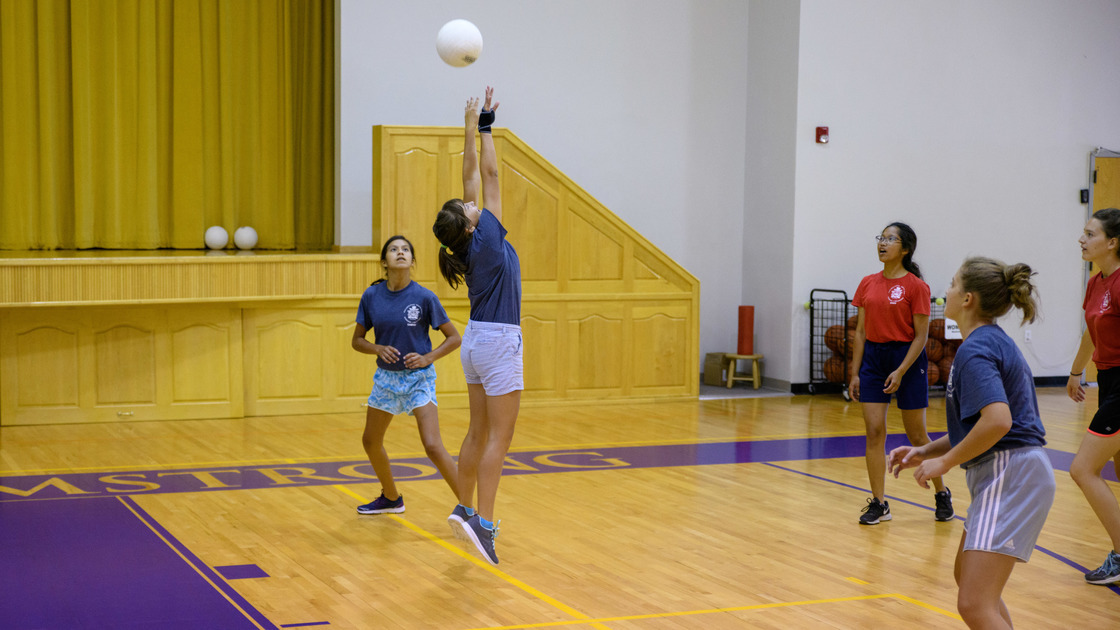 Lining up in the hallway outside the gym, the ladies of 4G and 3G were changing their shoes and getting water. The volleyball staff turned music on and cheering erupted from the hallway. The gym doors burst open, and the dorms followed Ansley Welsh and Leilani King, two volleyball instructors, around the gym for a warm-up sprint.

Since this was their third class, the dorms split into their A and B teams and started warming up on both courts. 4G’s A-team was practicing bumping while the B-team was practicing serving. I watched the A-team hit the ball for a while before joining in. They achieved 40 hits in a row—surpassing their goal of 30.

4G’s counselor, Brianna Weeks, called the ladies in for a cheer. “Looking forward to a spike-tacular game, 3G!” echoed throughout the gym, followed by 3G’s cheer. As the game progressed, Hannah from 3G and I watched from the sidelines—4G’s team was falling behind. Much to our surprise, though, they made a great comeback, winning the first game at 21-17.

Loud cheering pulled my attention over to the B team’s court. 3G’s counselor Tyler Verbout—it was counselor swap day for 3G—and Miss Welsh were celebrating a good serve from one of 3G’s players. The excitement was contagious.

My attention was pulled back to the other court as the A team started their second game, cheering, “Keep up the energy, 3G!” followed by “More energy!” from Miss Weeks.

4G’s B team was short one player, so I was asked to join—an opportunity I could not let pass by. The team captain, Mellissa, gave us our positions on the court. Both sides made great plays, and not so great ones, as the score rose in 4G’s favor. At one point, Miss Welsh joined 3G’s side and executed several high-intensity serves that brought the score up to a tie. How rude. The instructors encouraged the ladies to use all three hits before sending the ball over the net—an admonishment we tried to implement as we bumped our way to victory. No matter who won, though, it was a lot of fun.

4G’s A-team was also victorious in their second game, scoring 21-11 and securing a win for the class. However, Hannah of 3G claimed that they were still the winners at heart! The teams played a third game for fun since there was still time.

Forming a circle in the middle of the gym, the ladies of 4G and 3G cheered and hollered as the workers discussed who would get the ticket for the class. A drumroll of leg-slapping thundered from the group as the instructors ran around the huddle. Talea and Mellissa of 4G and Taniyah and Elizabeth of 3G got the tickets for the class.

Miss Weeks called 4G in, and they cheered: “Thanks for serving us into lunch, 3G,” as they skedaddled out of the gym.