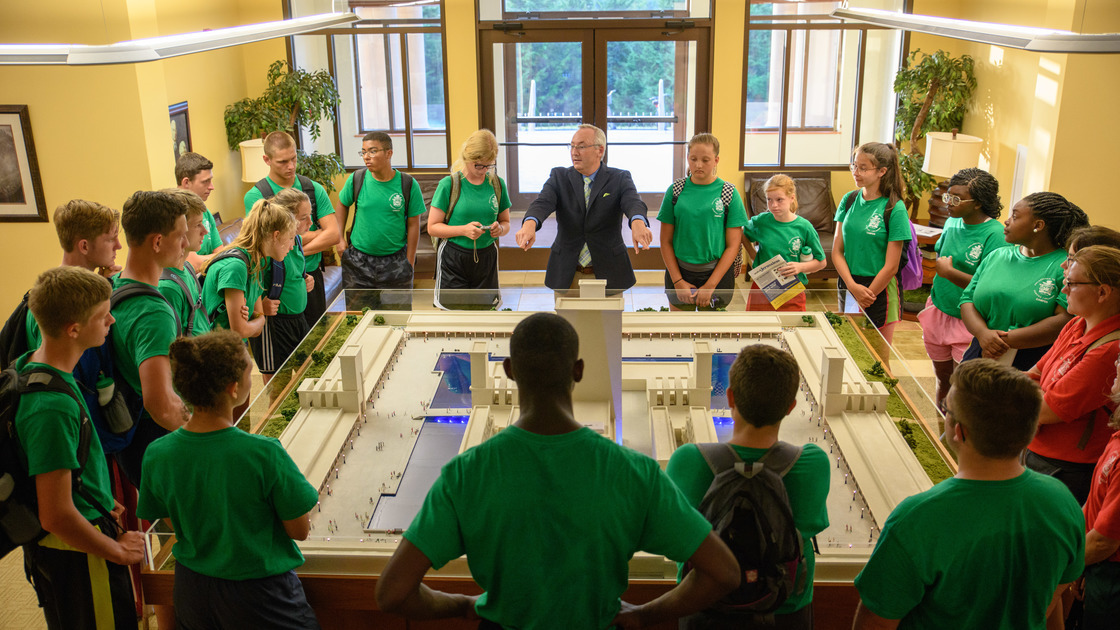 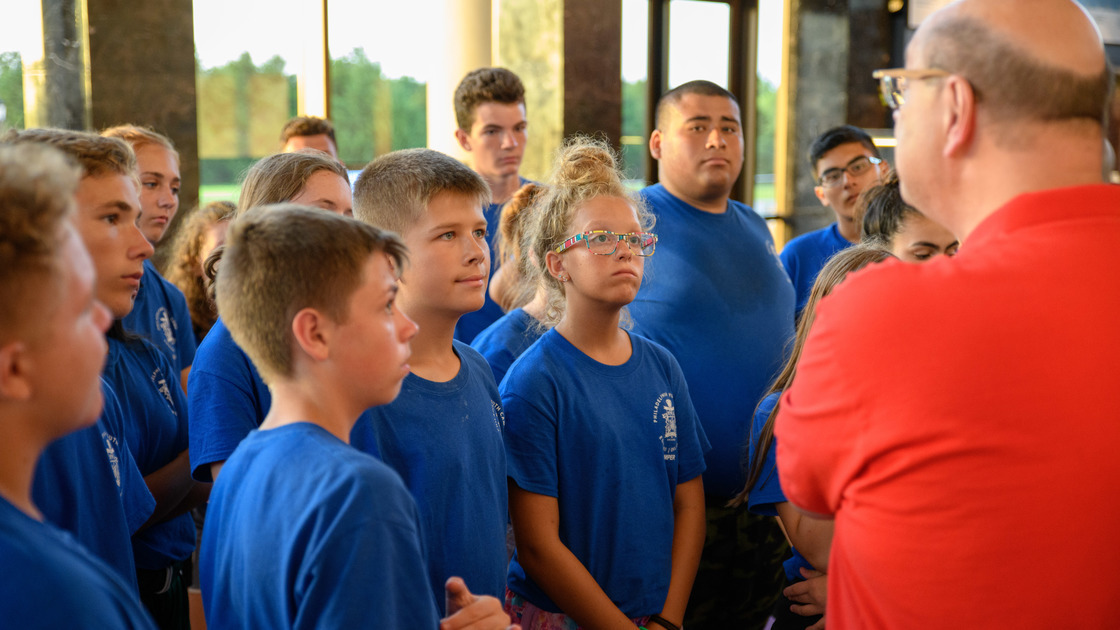 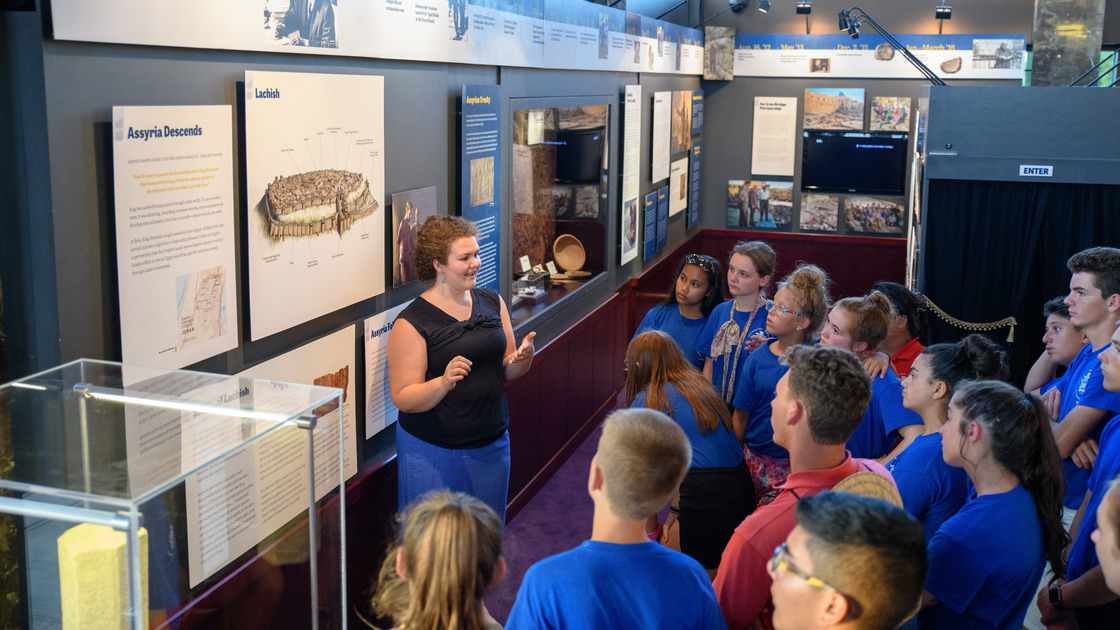 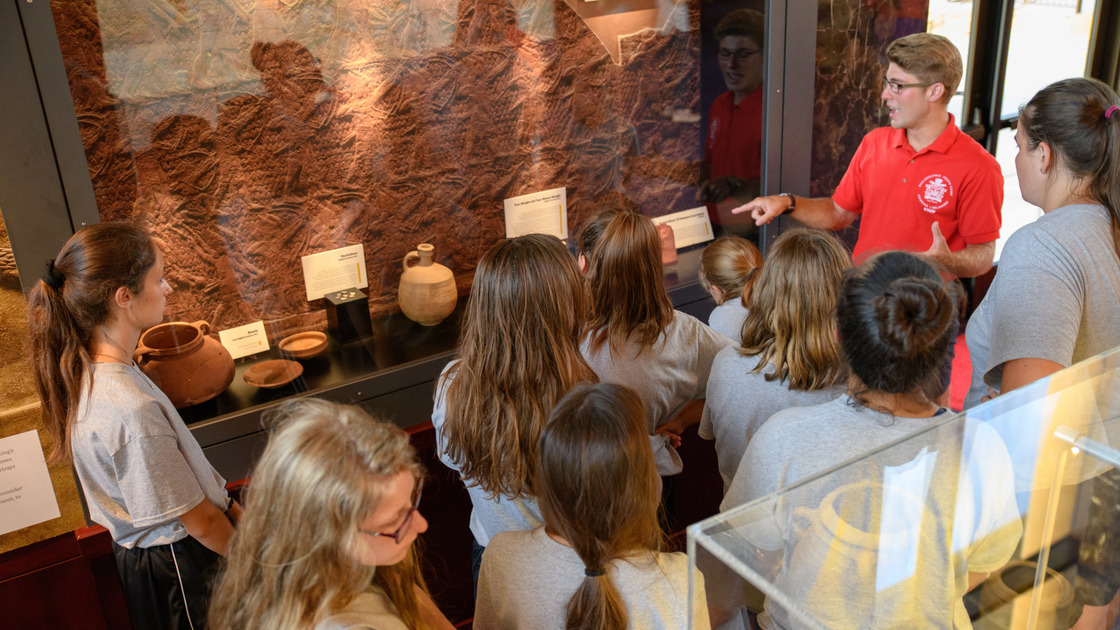 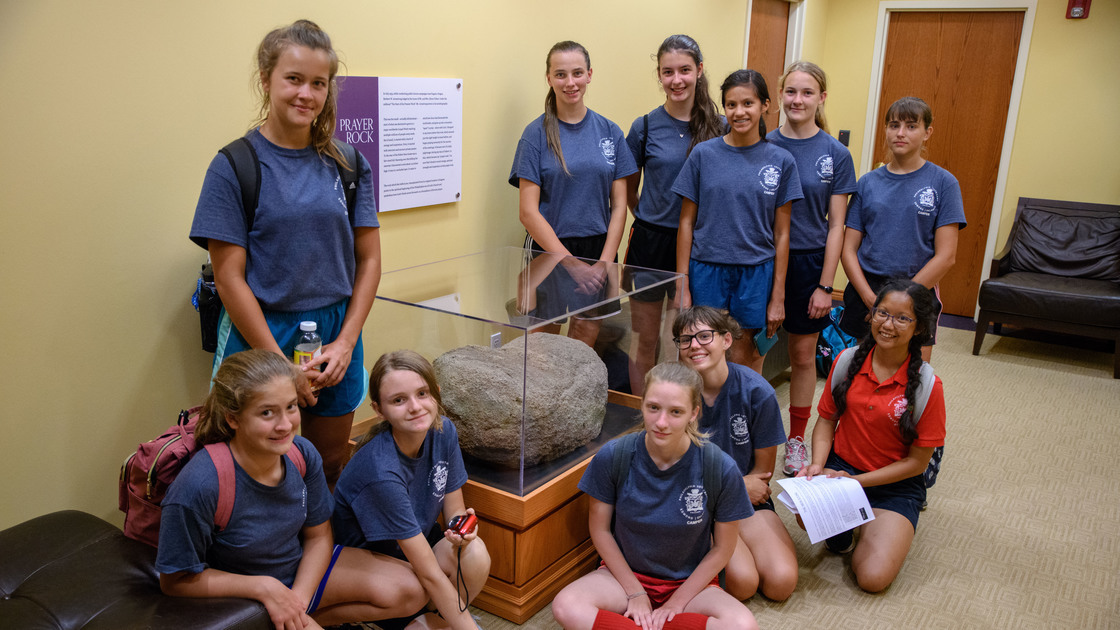 The night of July 18 was the Work Party—which takes the campers through five stations around campus, giving them a glimpse of what goes on behind the scenes of the work—and I was assisting 2G for the evening. Our first stop was the bookstore in the Hall of Administration. Since brother and sister dorms were together, we split the dorms into two groups—24 people in the small store would have made just about anyone claustrophobic.

Weighed down with snacks and various souvenirs, we made our way upstairs to the next station. The first thing that caught our eyes was the prayer rock in its display case with a plaque above it. Soon thereafter, Preaching Elder Gareth Fraser came upstairs and greeted us.

He then discussed the history of the prayer rock starting all the way back in July 1933 when Mr. Armstrong stayed at the Fishers’ farm. He then told us to remember that “this [stone] equals prayer and from prayer came the growth of the work.”

To emphasize more important dates, Mr. Fraser had the assistant counselors of 2G and 2B read off a list of dates associated with the history surrounding the old stone and the new stone. It started with November 1996 when the Stone of Scone was separated from David’s throne—the same month the pcg began plans to print Mystery of the Ages—and the list finished with January 16, 2003, when the principal terms of the court case settlement were agreed upon and the litigation ended.

Mr. Fraser also mentioned that on August 8, 2002, prayers were requested of those attending the Philadelphia Youth Camp for the prayer rock’s safe arrival. He went on to say, “This is tied to prayer.” The focus on prayer was again emphasized on the handout he gave us: “There is a towering lesson here: If we are going to succeed spiritually, we must build on a foundation of prayer!”

After the first half of the tour, Mr. Fraser led us all downstairs for the second item on the tour: the Ezekiel Temple model. He briefly explained the history of the model being built, and then he explained what some of the buildings are and just how big they will be. The Temple Portico, at a whopping 240 feet, is three times the height of the tallest part of Armstrong Auditorium. The altar in the inner court is 22 feet tall—that’s about as tall as the pillars outside of the Hall of Administration!

After this inspiring tour, our next station took us to Armstrong Auditorium for a tour of the exhibit. The exhibit was split into three sections. We were plunged right into the story as Shane Granger, the House Manager of Armstrong Auditorium, explained the details and specifics of the bullae.

Once Mr. Granger finished, 2B and 2G were directed to the next section where our tour guide, Sherry Beezley, explained the end of the exhibit. She discussed how the Assyrians liked to brag about their successful conquests but did not record their failures—such as Assyria’s attempt to conquer Jerusalem where 185,000 of their soldiers were killed in one night by one angel, which is verified by three historical accounts. She explained the artifacts on display, such as the arrowheads and weapons, and let the campers walk through the replica of Hezekiah’s tunnel replica constructed from actual 3D scans of the tunnel in Jerusalem.

The campers were then directed to the beginning of the exhibit where our tour guide, Nick Irwin, explained the beginning of the story. Mr. Irwin stopped at one picture that showed several people lifting a big, carved rock out of the ground and asked the campers what they thought the object was. When told that it was a toilet, several campers gasped in shock.

A quick look at a watch revealed that we needed to head out to make it to the next station in time. We then skedaddled to the Mail Processing Center (mpc) in what felt like record timing.

At the mpc, we were directed upstairs to the recording studio for kpcg where staff members Joshua Sloan and Dwight Falk were waiting. After introducing themselves, Mr. Falk explained that they were going to ask the campers questions to possibly be played on future radio programs. Questions included things such as “What is your dorm number and name, and why did you all choose that name?” “What are your favorite activities at pyc?” and “Does anyone in your dorm sleep talk?”

Next we headed downstairs for the final station of the night: a tour of the mpc. A worker at mpc, Rachel Culpepper, led the tour, showing us the machines and what they do, such as the “old hag” machine that packs all the mail. Of all the machines, naturally our attention shifted to the “Guillotine” in the corner where Ms. Culpepper, by popular request, cut a thick stack of papers in half.

We were then led into the warehouse of the mpc where Ms. Culpepper had the assistant counselor of 2B, Caleb Heerma, choose a book title from the three listed on the board. The campers then had 30 seconds to search through to huge warehouse to find the specific book in all the shelves and racks. 2B was the first dorm to find the book—they were also the first boy dorm to win the competition.

On our walk back to the John Amos Field House to get snacks, I got to talk to Heather of 2G about the tour. “I loved it,” she said. She also mentioned how inspiring it was to see the prayer rock and then Ezekiel’s temple followed by the archaeological exhibit—which is more proof of the Bible.

Mr. Heerma said that the work party is a great way “… to get the campers focused on the Work here at headquarters.” Indeed, the campers seemed to be really excited all throughout the tour—seeing what goes on behind the scenes of the Work.