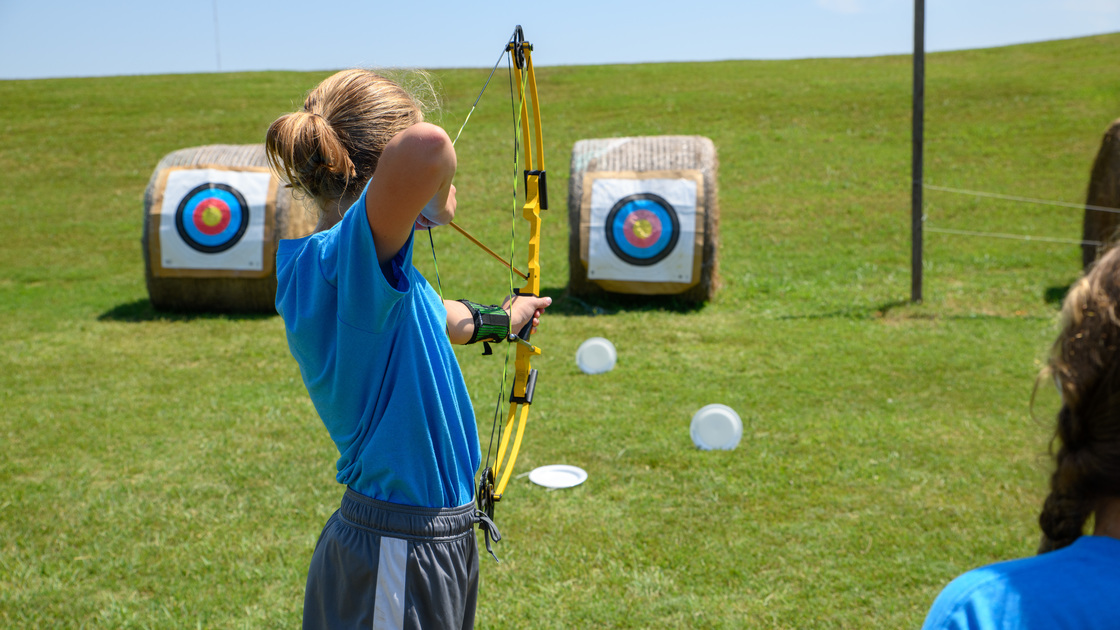 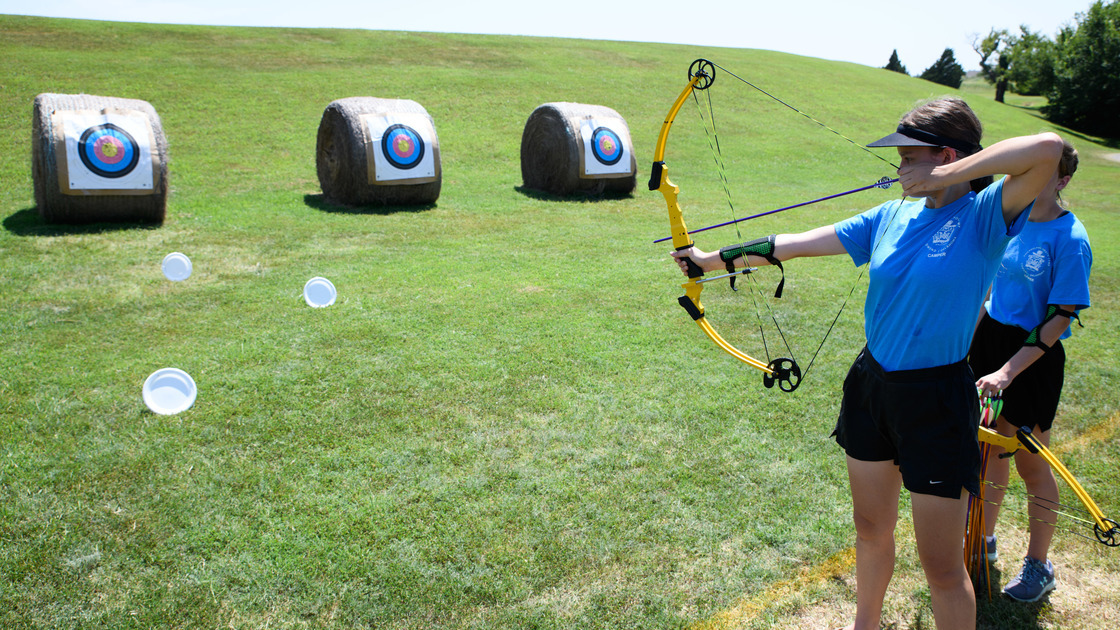 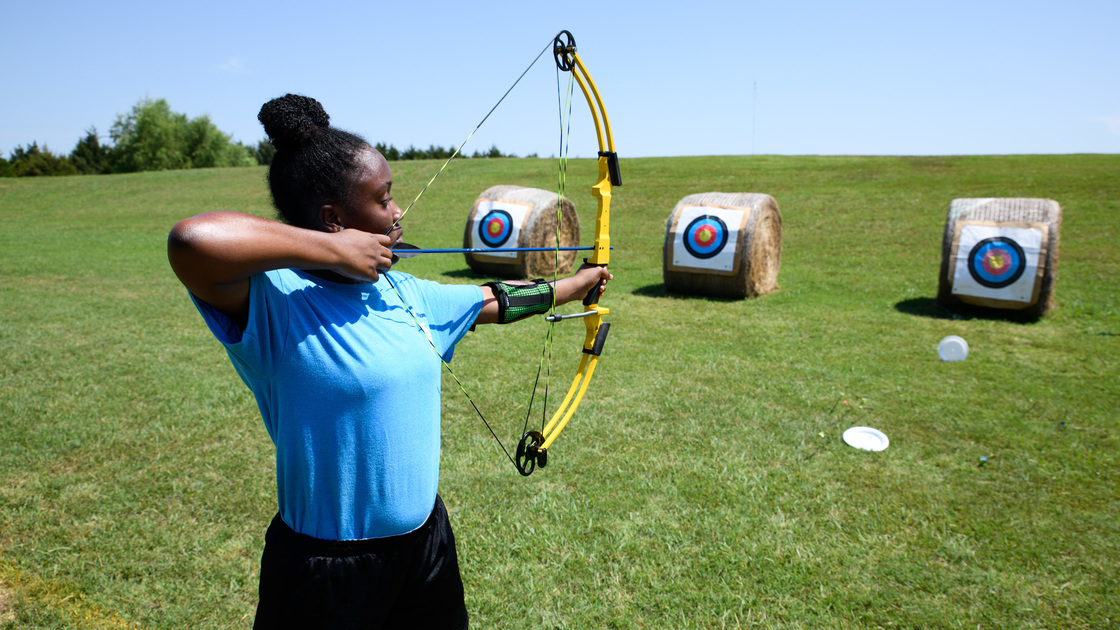 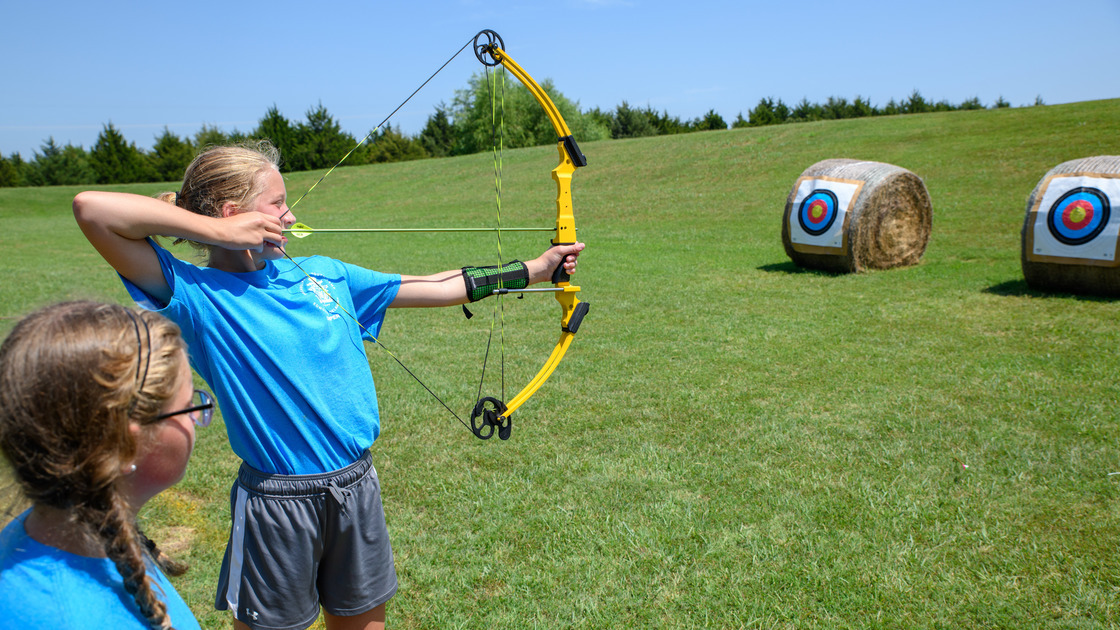 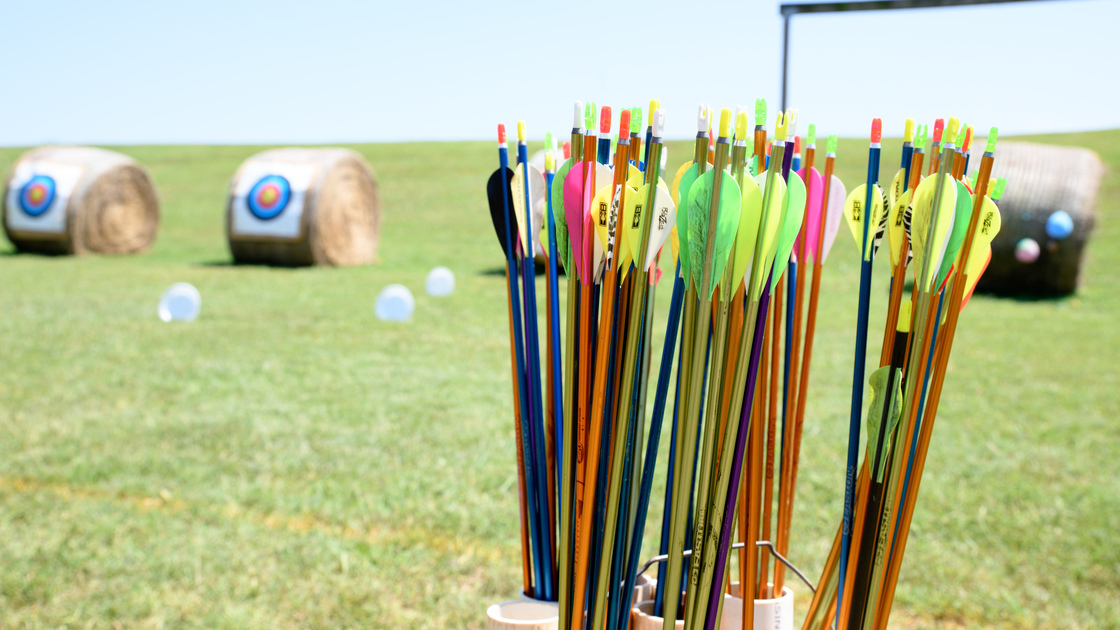 When I arrived at the archery tent, 2G was already getting water and applying sunscreen. Archery instructors Bailey Crawford and Stephanie Szabo asked everyone to say their middle name and two nicknames. Turns out, the girls had a lot of nicknames.

Mr. Crawford reviewed the whistle commands before we all headed out from under the glorious shade of the tent into the blistering heat of the sun. Today was especially hot with the highest temperature being around 107 degrees Fahrenheit. Ouch.

The ladies of 2G were grouped together in teams of two. The first group of shooters took their positions and fired, once given the whistle command. “I’m going to test you,” said Mr. Crawford, referring to the whistle commands, and he did throughout the class, but 2G was not easily tricked.

A little later, assistant counselor of 2G Eva Hochstetler exclaimed, “Ms. Szabo, look at my legs!” (She was referring to the beads of sweat on her skin.) To this, Jacq of 2G responded, “I had two drops of sweat on my legs.” Mr. Crawford smiled as he commented on the archery conversation that had nothing to do with archery.

The ladies continued to shoot arrows at the targets, each shooting six arrows per round. Once everyone finished the round, Mr. Crawford blew the whistle three times, and all the ladies went to the targets to count scores and pull their arrows. When pulling the arrows, I heard a chorus of “Point those arrows down, point those arrows down,” which was mostly sung by Ms. Hochstetler. If the campers do not point the arrows down once they pull the arrows out of the target, they are then forced to sing the song, solo-style, in front of everyone to help them remember. For this class, no one was forced to sing this song—probably because Ms. Hochstetler was gladly singing it instead.

After shooting a few rounds, the campers got water while Mr. Crawford and Ms. Szabo set up for the challenge. They placed three paper plates in a zig-zag pattern in the ground in front of the target. The challenge was for the campers to shoot all three plates before shooting at the target—but they only had six arrows.

Heidi and Gillian went and they both shot all three plates and scored 4 points on the target. It was at this point that I was introduced to 2G’s cheer: “Go 2G, go 2G, go 2G … Hey.” It seems that this year, a lot of the dorms have a specific cheer that they say a lot. 2G happily cheered this a few more times throughout the remainder of the class.

All the girls tried their hand at this challenge—shooting the plates, not repeating the cheer—and even surprised the archery staff with their aiming skills. All but one girl hit all three plates. Heather got the highest score with three plates and 16 points on the target, and she got the ticket for the class.

The ladies of 2G cheered, thanking the archery staff before they headed off, rather quickly, to their next class of the day: softball.