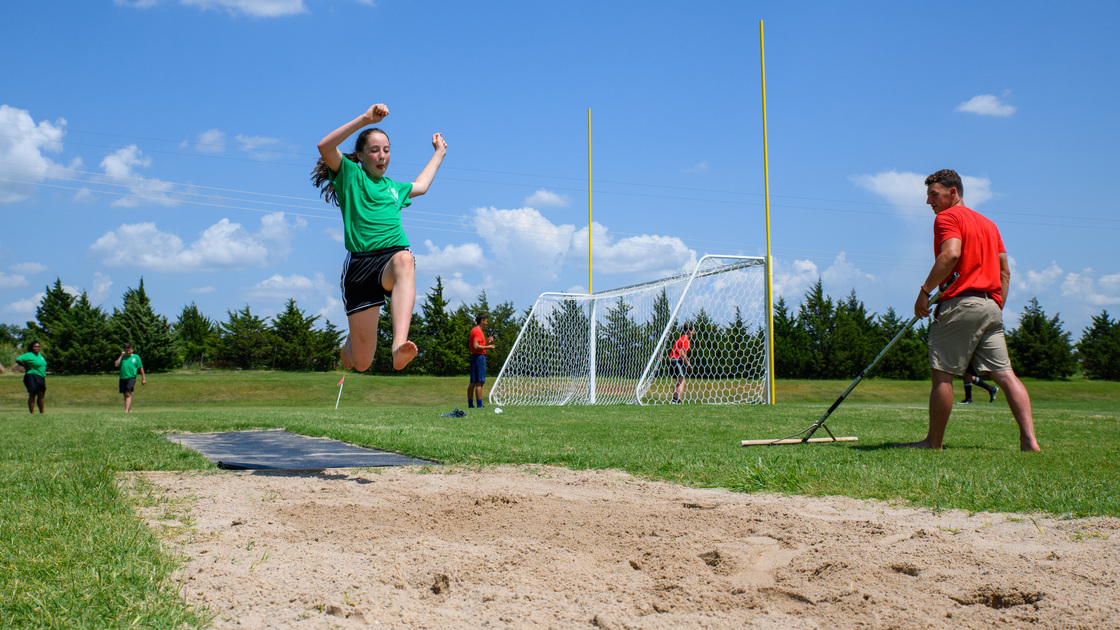 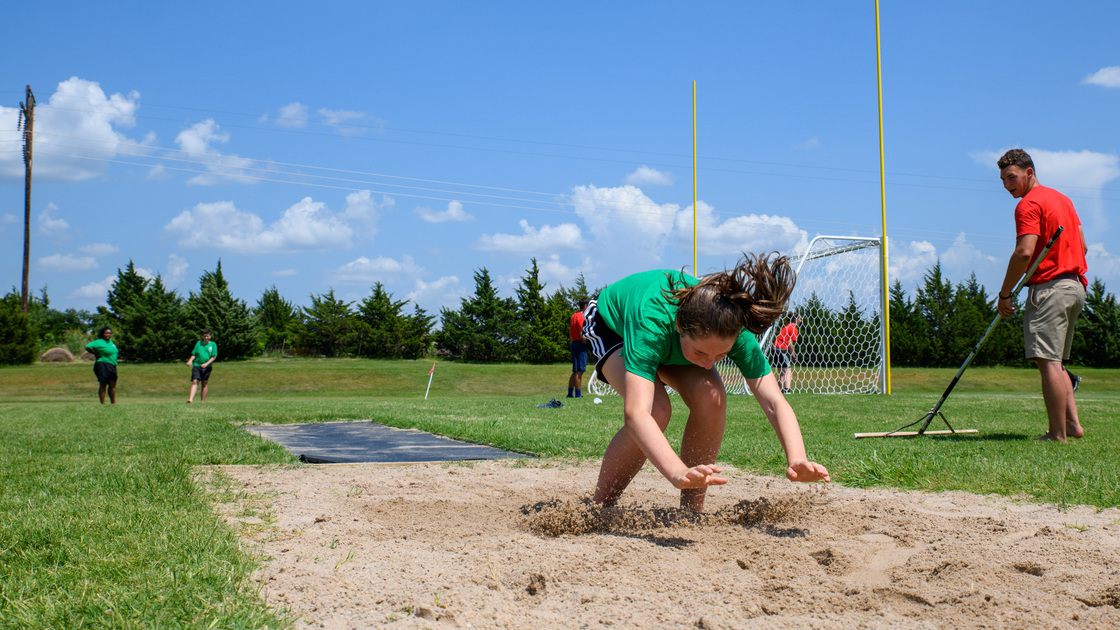 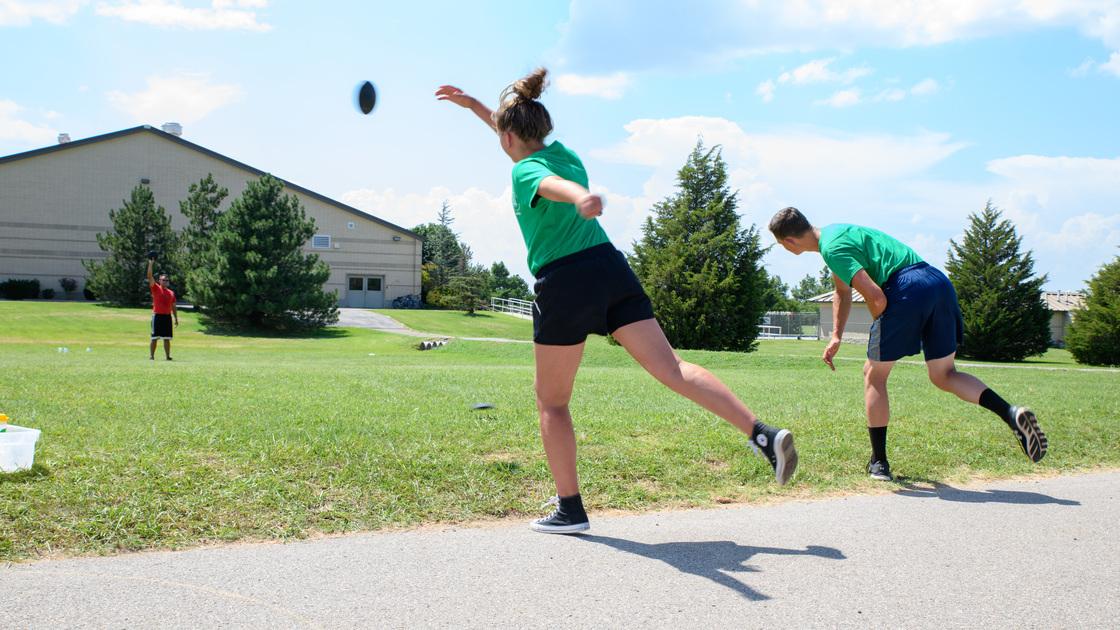 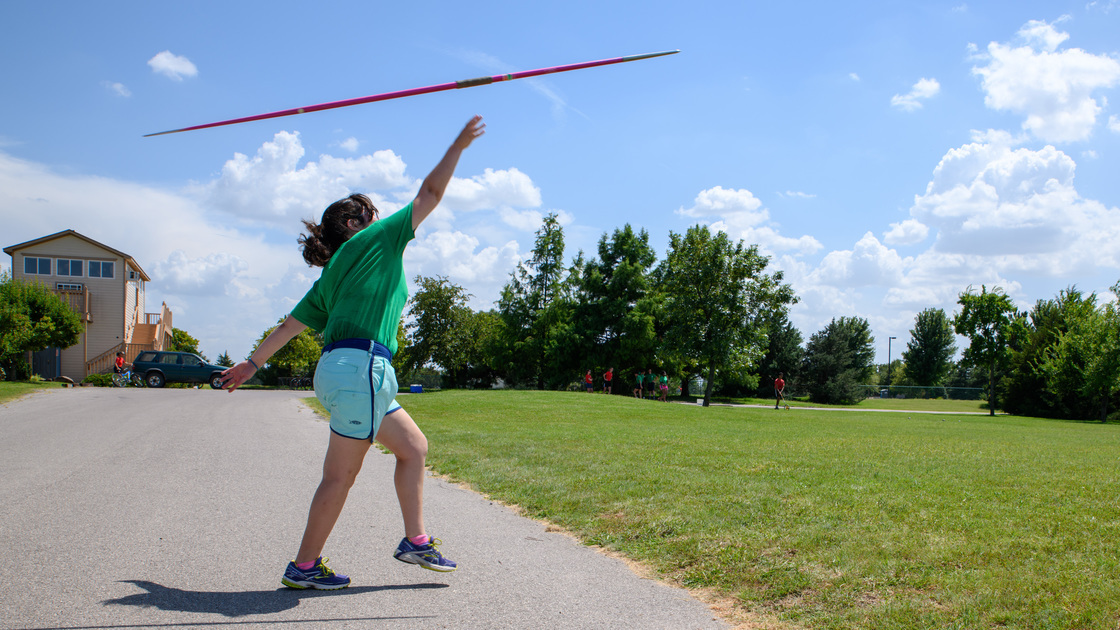 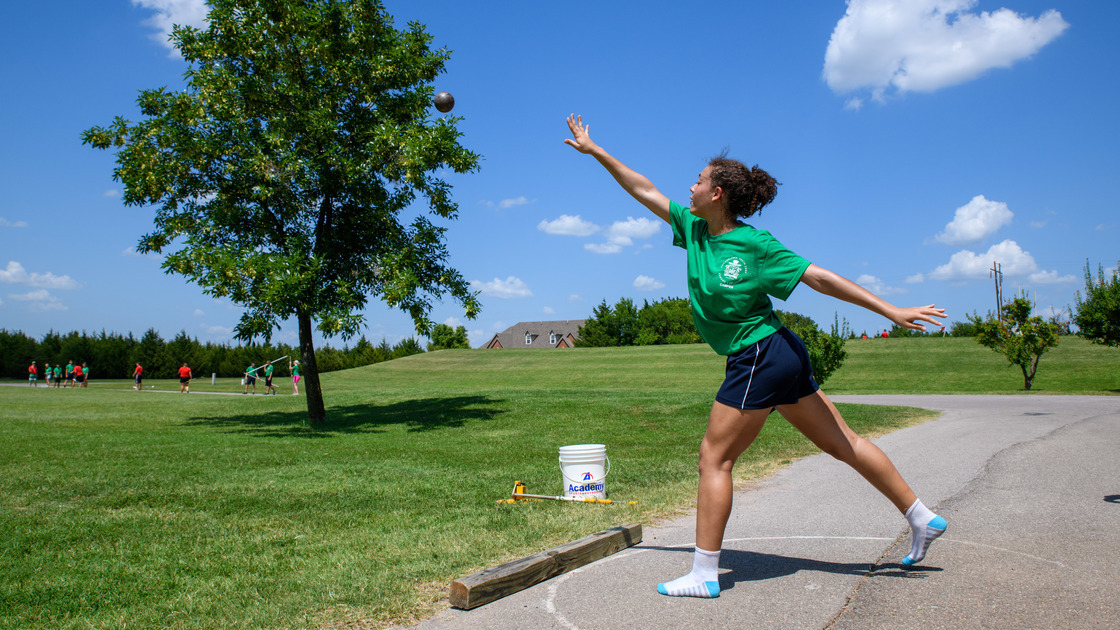 At 2:14 p.m. exactly, the workers burst out of the gym and sprayed the unsuspecting campers with water guns and then ran out into a small field not far away, motioning for the campers to follow. They all formed a circle and Mr. Ellis, the head track and field instructor, stood in the middle. Gavin Fraser, the long jump instructor, lead the campers in stretches while Mr. Ellis talked to the campers.

“Why do people fail?” Mr. Ellis asked the campers. After several wrong answers, he revealed the answer: “Lack of resourcefulness.” He then added, “Motivation inspires emotion.” Indeed it does because he then began jumping around the inside of the circle telling everyone to join him. Whatever one wants to call it, tribal dance or track and field warm up, it worked because several campers were now smiling and laughing. Mr. Ellis then went around the circle and had everyone yell, very loudly, “I love track and field!” What started out as one at a time turned into frenzied, simultaneous screaming. While unconventional, this warm up surely got everyone’s blood pumping. I know it got mine going—and I was just watching.

The dorms were then split into groups, with two girls and two boys in each group, and sent to five different stations: discus, javelin, shot put, running, and long jump. The dorms went clockwise through the stations, so I went counter-clock wise to spy on all five groups.

The first station I went to was discus, which was instructed by Matthew Kawalek and Grant Clayton. Since this was the first class, they went through the instructions on how to properly execute the throw. “You guys are all right,” Mr. Kawalek remarked, upon learning that all the campers in this group were right handed. Once the campers could throw the discus (a flat disc that weighs a pound or two), Mr. Kawalek went and stood about 60 feet away as Mr. Clayton explained the new challenge: try to hit Mr. Kawalek. Anastasia from 3G asked, “Won’t he get severely injured if he gets hit?” and one of the campers from 3B responded, “He’s Mr. Kawalek. It’ll bounce off.” At least there was a sliver of concern. Poor Mr. Kawalek. (Disclaimer: No Kawaleks were injured in this endeavor.)

The next station I went to was javelin, instructed by Carleigh Blanchat, who had the campers practice with pvc pipes of similar length to the actual javelin. When Ms. Blanchat let the campers throw the javelin, David of 3B threw the javelin and got it to stick in the ground on the first try.

Up next was shot put, instructed by Daniel Di Santo. After explaining the technique behind the motions to help avoid injury, Mr. Di Santo demonstrated the throw, sending the solid, metal cannonball out into the grassy field. The campers gave it a try as well. Turns out, throwing a heavy, metal cannonball is really difficult, but Scott from 3B sure did make it look easy—and his was heavier than the girls’ ball!

We were told to switch, but the word got to us late, so we were slightly behind schedule. I made my way up the hill to the soccer field where the last two track and field events were. I walked up to the next station: running, not sprinting—I was corrected heavily for calling it sprinting. The instructor for sprinting … oh sorry, running … was Erin Lexa. “I will have to go faster because you were all late,” she said, quickly—very quickly. I’m from the south, and we value talking slowly, so this was a culture shock for me. I sat in the grass not far away to listen to the instructions given on using the dominant foot to start out and then leaning into the run to let gravity help. Ms. Lexa counted them down, and then they rudely ran away, so of course, I had to follow. Once they finished with the final stretch of running, even though it looked like sprinting to me, we were told to switch. As I walked to long jump, I heard Ms. Lexa call out, “Head to shot put. Fast, if you can. Practice running.”

Lastly, the long jump was taught by Gavin Fraser. After quickly explaining the process of the long jump, he had the campers line up down by the soccer goal and then one at a time try the long jump. Once the campers jumped, Mr. Fraser would take a moment to explain what that camper should work on before they headed back to try again. He then recorded a video of the campers’ jump to check their movements in the air and give them appropriate instructions to help them improve. After falling backward a few times, Hannah of 3G tried the long jump once more and landed successfully!

Both 3G and 3B were then called to gather back behind the field house where the class started. The brother and sister dorms cheered as the instructors decided who to give the tickets to: Hannah of 3G and Justin of 3B. Counselor of 3G, Eleanor Clarke, helped her campers get ready to head to the next activity as 3B cheered: “Thanks for the run, track staff and sister dorm!”