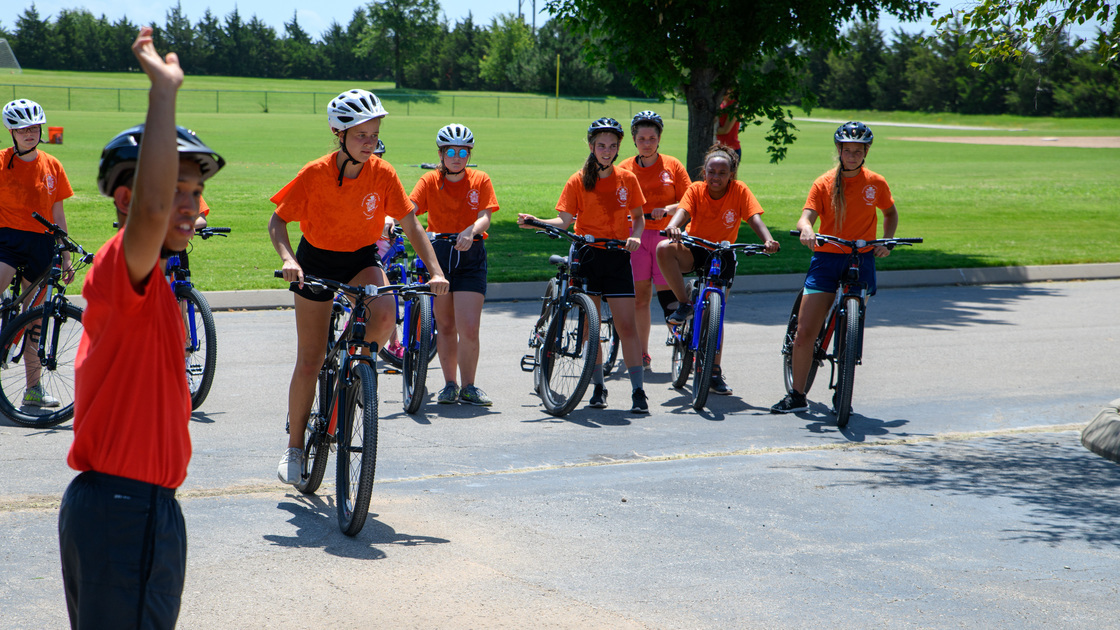 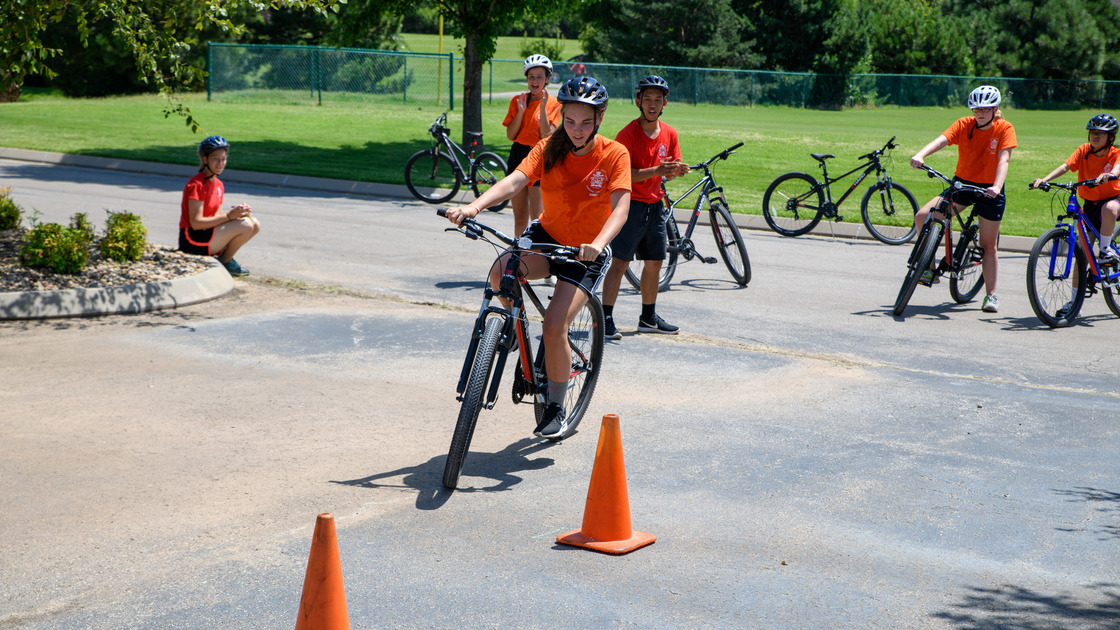 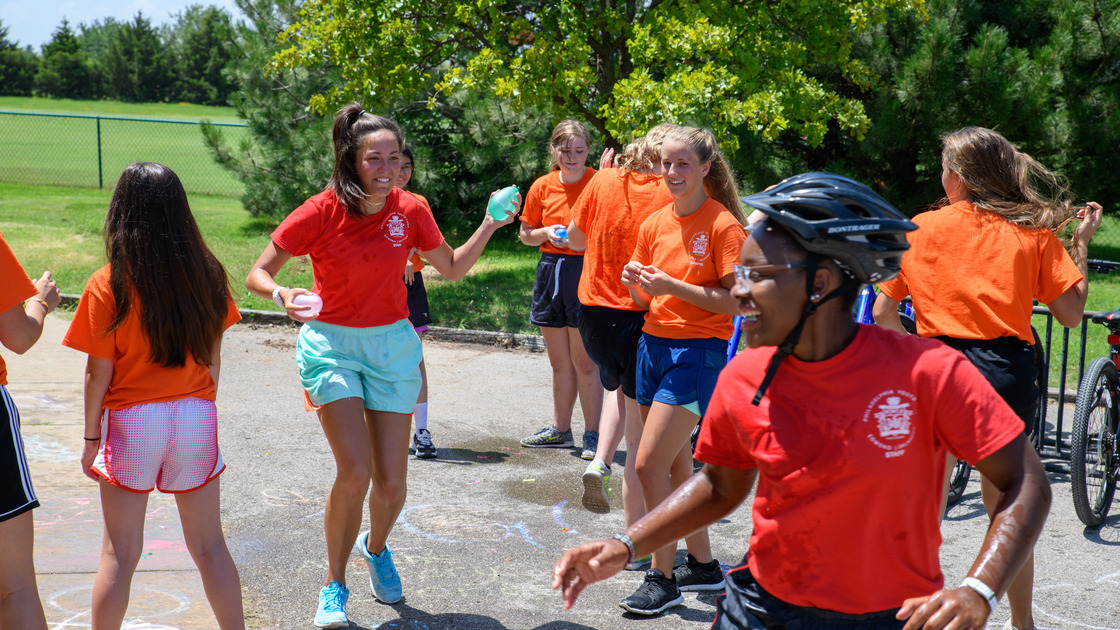 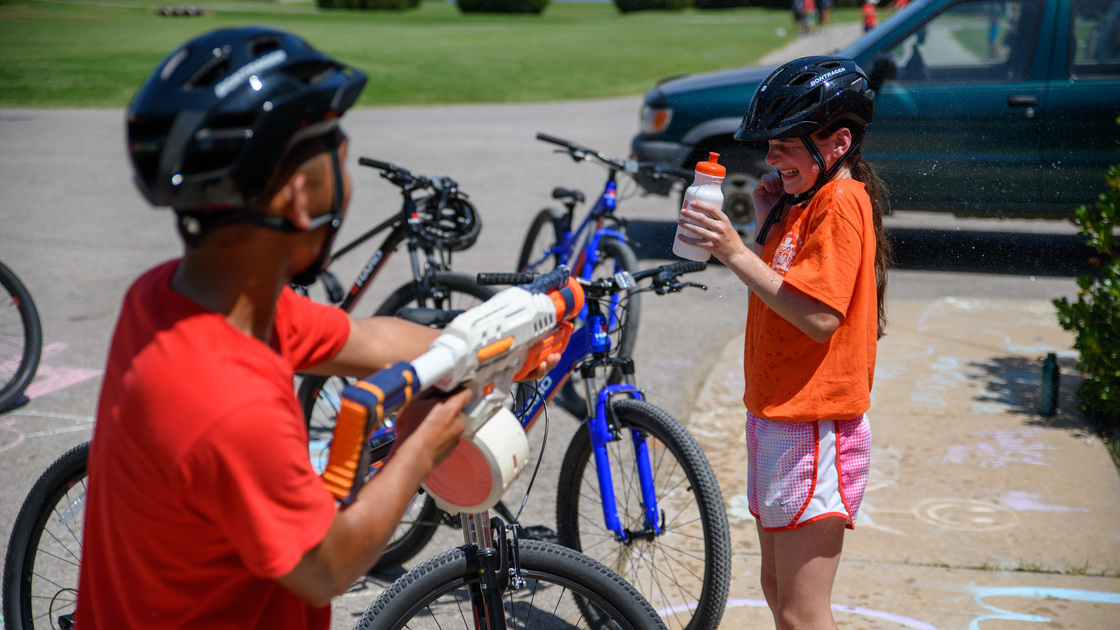 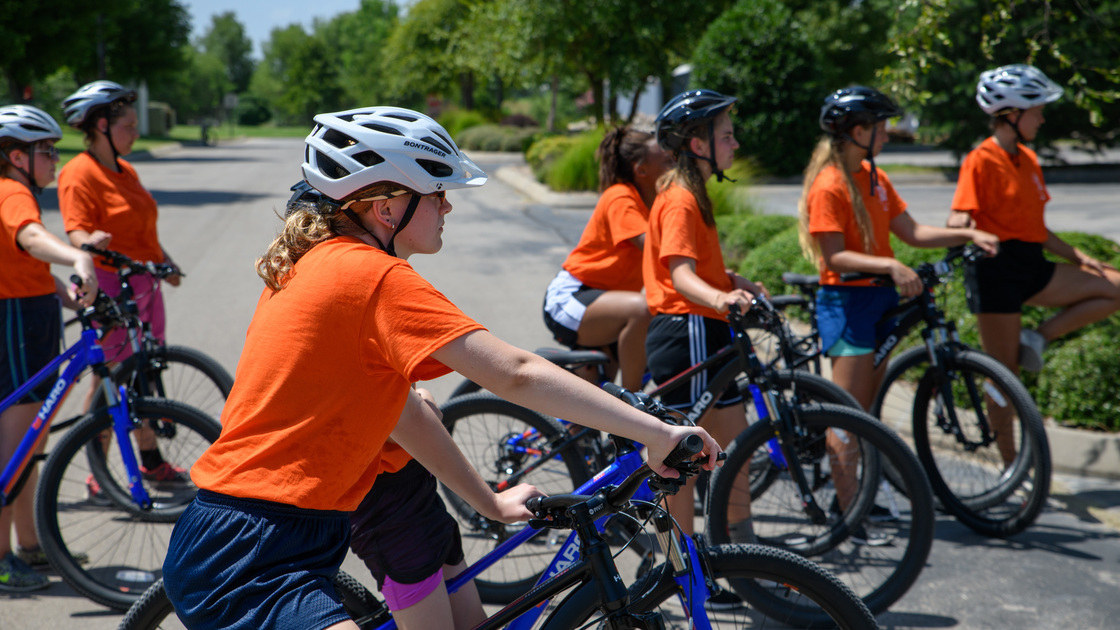 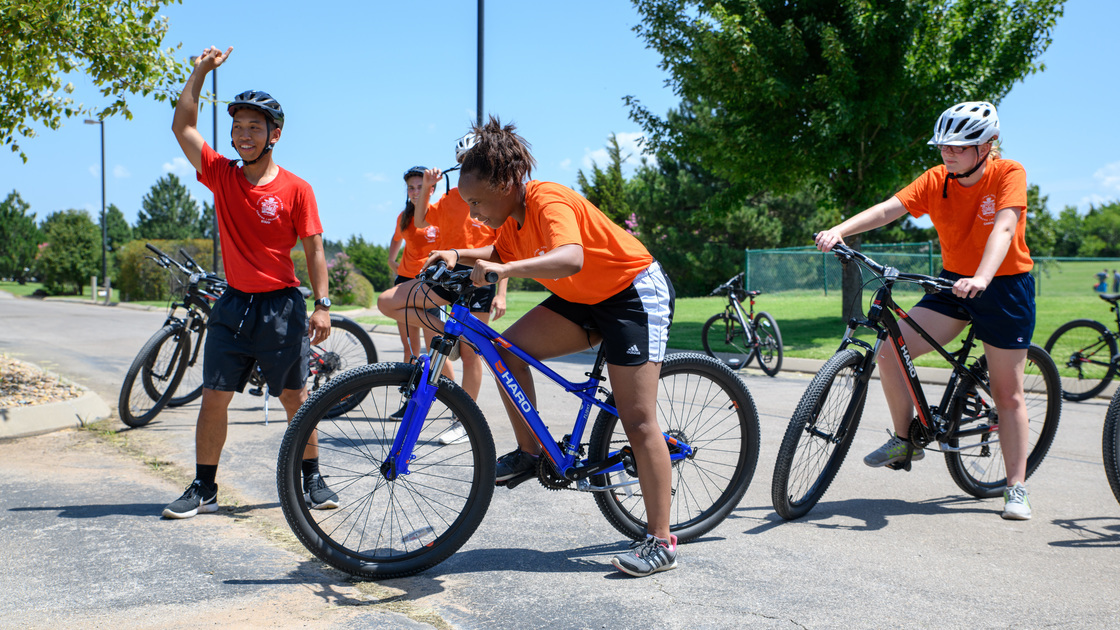 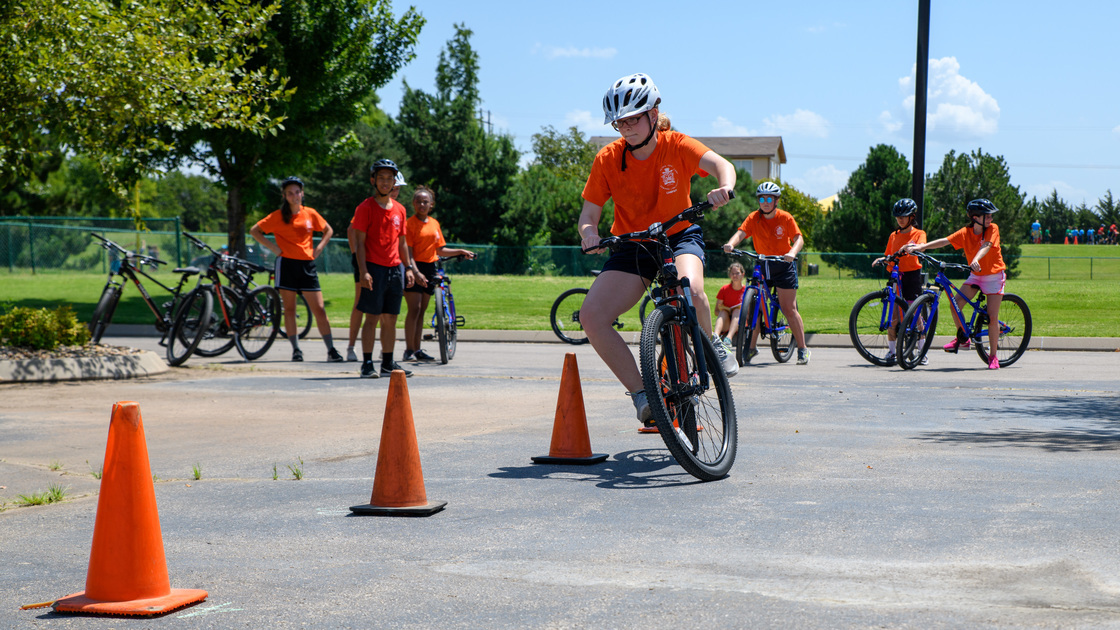 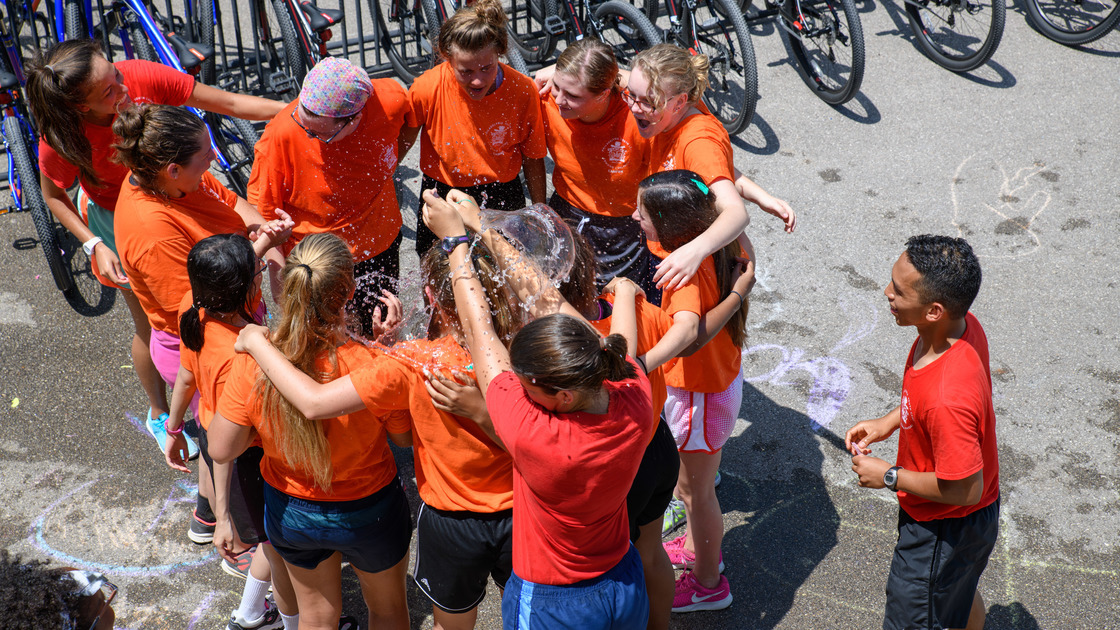 Standing in the shade of the building on campus known as “the tower,” I talked with the cycling staff as we waited for 1G to arrive. The head instructor, Andy Inojales, and his assistant, Ariana Eames, told me that this year all the bikes for PYC are new—brand new Haro Flightline One mountain bikes. My excitement for the new two-wheeled transportation devices was forgotten as the happy cheers and chants of 1G met my ears and their bright-orange shirts became visible around the cluster of trees.

As the campers filled their water bottles and prepared for the class, Andy Inojales, aka Mr. Ino, turned on some music. The counselor of 1G, Miss Brittany Terrell, said, “We are the dancing dorm,” and indeed they were: Several girls broke out into dance as the song “Dancing in the Moonlight” came on. Surprisingly, the dance that we all ended up trying to do was called the “backpack dance.” No backpacks are involved in the execution of this dance.

Turning off the music and, thus, grabbing our attention, Mr. Ino started the class by having everyone, including me, run to the end of the road and back. We all then formed a circle in the shade of the trees and stretched.

Each bike has a name such as, “Eager,” “Incredible” or “Courageous.” After properly stretching, 1G picked out their bikes; they were warned to remember the name of their bikes because each camper has to keep using the same bike for every cycling class. Then 1G listened to Mr. Ino as he explained how to signal left and right hand turns. He then demonstrated how to go through the course to practice the hand signals.

Once everyone had completed the hand-signal practice course, Mr. Ino led the girls through a long course around campus that went down roads and along paths so everyone could practice the new hand signals on actual roads. We even encountered a car along the way—the maintenance crew’s car to be exact—and the hand signals became important.

Back at the tower, everyone took a quick water break. Unexpectedly, Mr. Ino grabbed a water gun and went up to one of the campers. “What’s the name of your bike?” he asked. “Incredible,” was the response. “Are you incredible?” Mr. Ino asked and the camper responded: “I think so.” “Of course you are,” he said as he sprayed her rather mercilessly. She laughed as she tried to avoid the water. This continued through every camper. Fortunately, I was able to watch this endeavor take place without getting sprayed by water—a feat even Mr. Ino was not able to achieve because his assistant, Miss Ariana Eames, came up behind him and gave him a taste of his own medicine, soaking him with water. Having printed this observation, however, will not ensure that I remain dry.

The last activity planned for 1G’s first cycling class was a short course of traffic cones that the girls were to maneuver around for time. 1G’s bright orange shirts matched the bright traffic cones of the course, but apparently 1G did not feel the compatriotism with the traffic cones because several girls accidentally crushed the cones, causing them to momentarily lose their shape before popping back up—unscathed.

Mr. Ino explained that the time to beat was a record he had set: 45 seconds. Each camper went through the course trying to avoid the cones while maintaining a quick pace. The last camper to go through the course, Ava, took off as her dormmates cheered her on. While she did not beat the record, she did have the fastest time of her dorm.

1G gathered in a huddle to decide on the cheer they wanted to say as the cycling staff and I discussed our cheer. “We had a wheely good time, cycling staff and Miss Balaa,” 1G cheered. Of course, when met with a pun, one must respond with a pun, so we cheered out, “Way to gear us up for lunch, 1G!” as they whooped and hollered and shifted over to lunch.