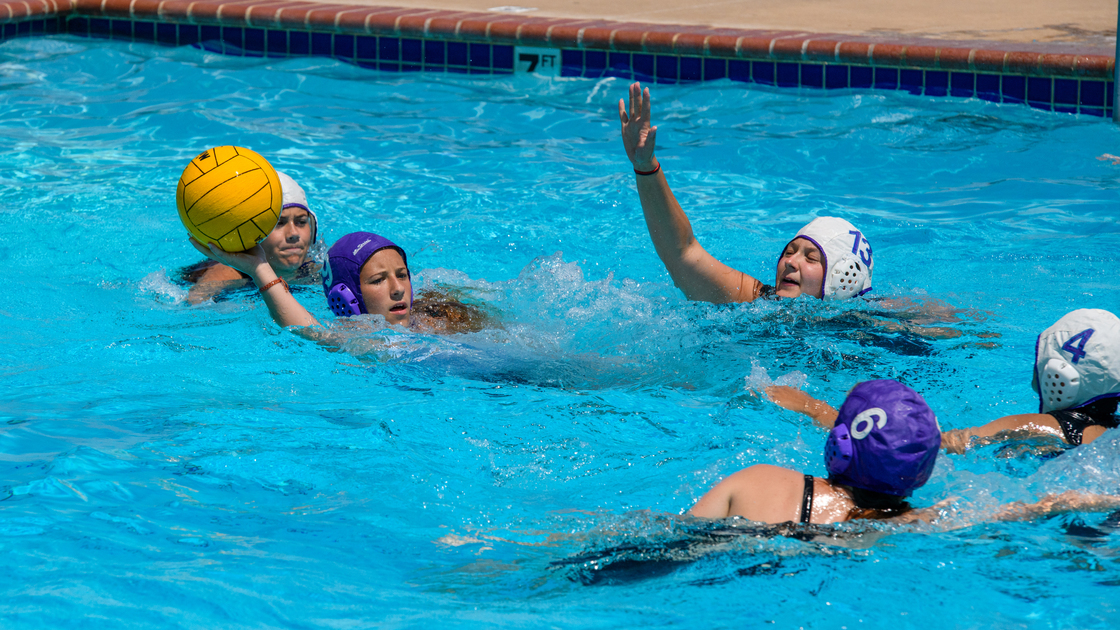 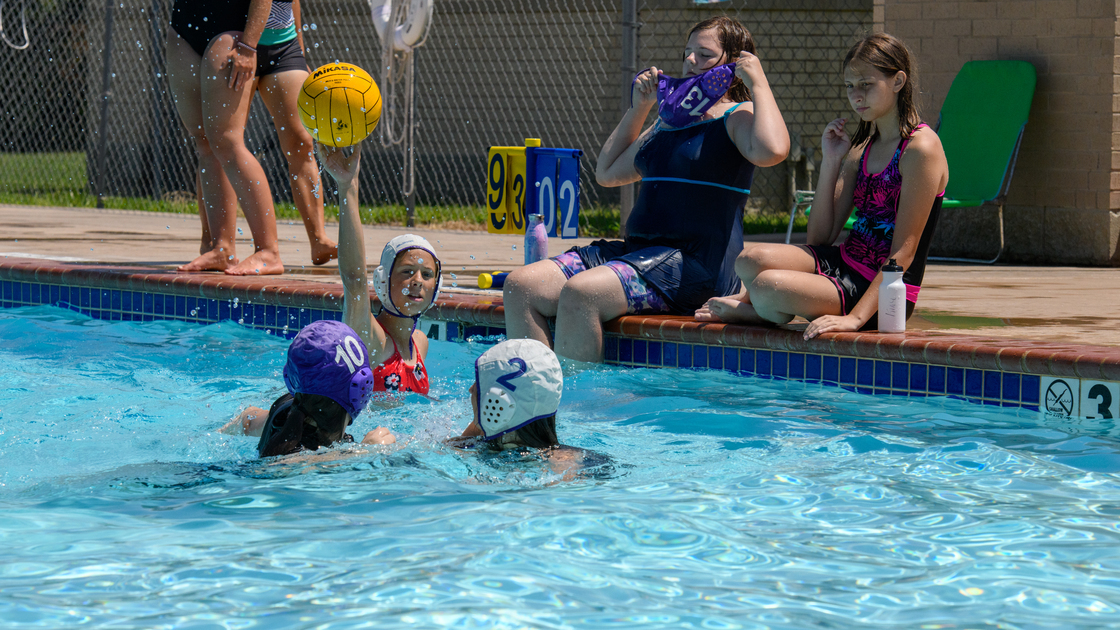 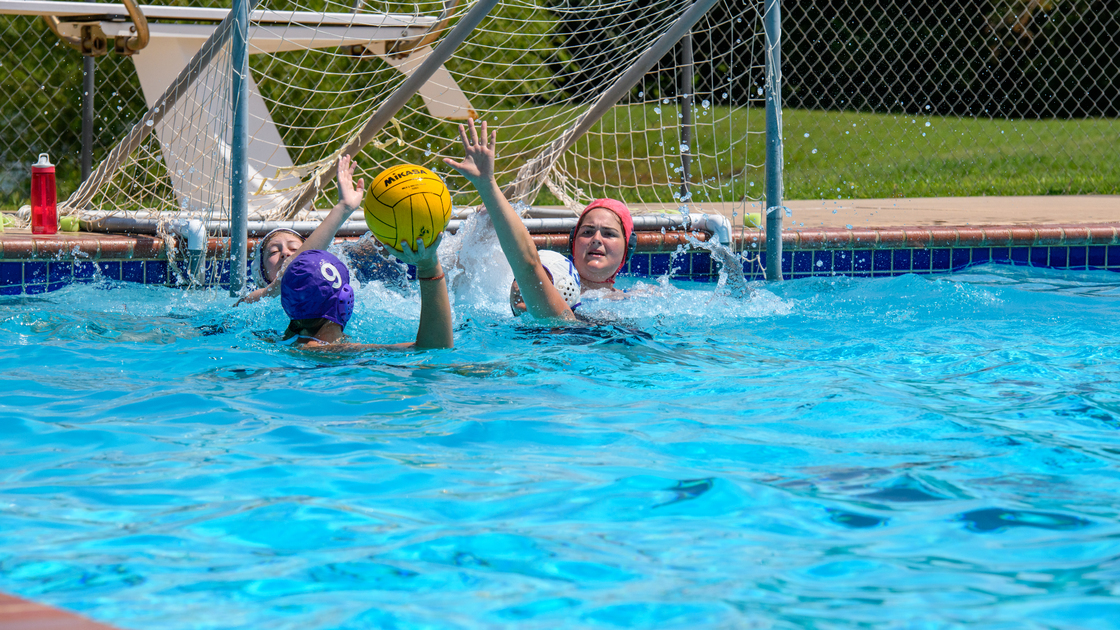 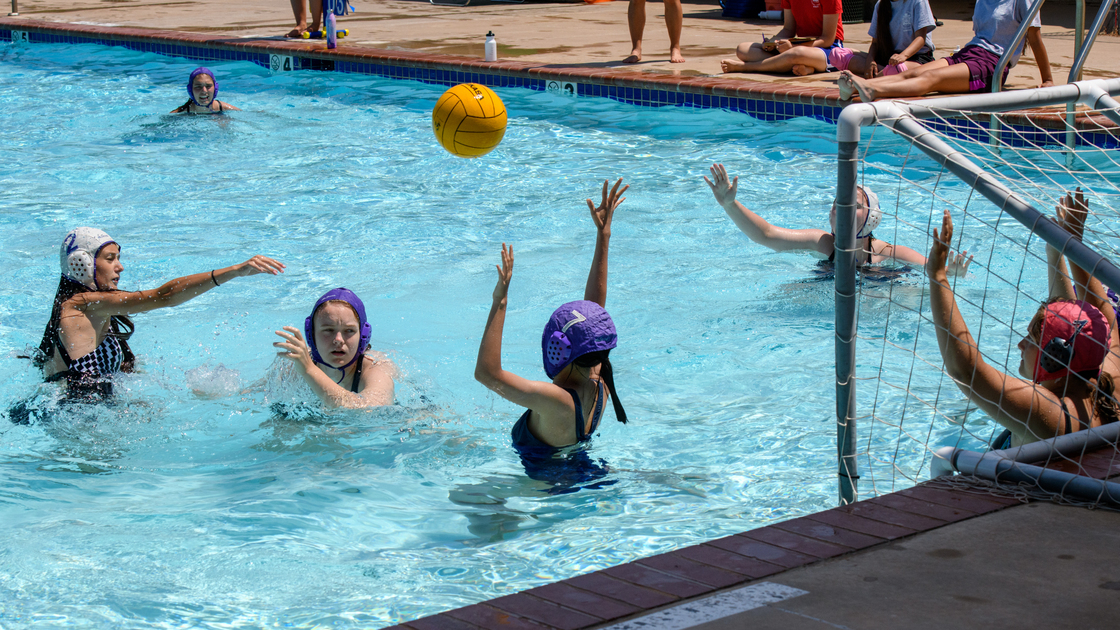 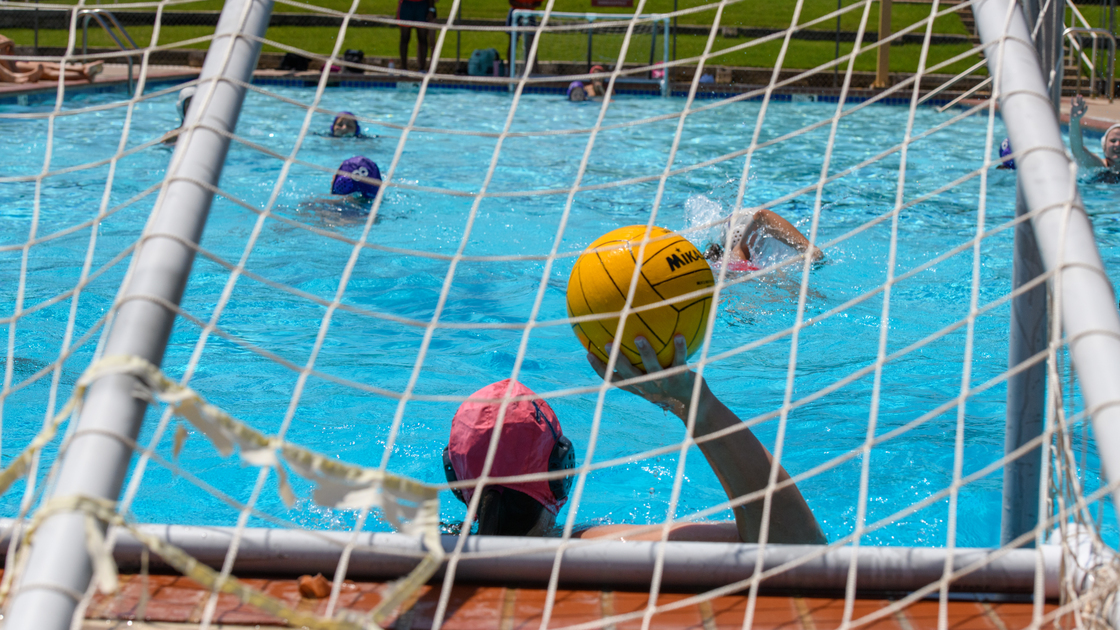 At the pool, Nick Irwin and Julia Goddard, the water polo staff, were waiting for dorms 5G and 1G to change, stretch, and put on their colored water polo caps. 5G, decked out in their white caps, sang gleefully as they stretched and discussed their starting positions: 5G would be defending the shallow end and shooting in the deep-end first.

With the girls on their respective sides of the pool, the bright orange water polo ball was thrown up in the air and landed with a plop right in the middle of the pool. Mr. Irwin blew his whistle, signaling the girls to swim toward the ball. 1G quickly gained possession and tried three times to score a point—all three attempts were thwarted by 5G’s goalie, Christina—before 5G finally got possession and took it down to the deep end. Ellie of 5G took a shot, but it was blocked by 1G’s goalie, a completely different Ellie.

Finally, Tori of 1G narrowly made it past 5G’s goalie, scoring a point for 1G. Mr. Irwin blew the whistle to let everyone know that 1G had scored. A little later, after everyone started swimming back to their sides of the pool, a sound effect from Miss Goddard’s phone of a crowd cheering “goal!” sounded. The delay in the sound made me smile—better late than never. At the end of the first quarter, 5G was still behind 1G by one point, but they did not give up.

In retaliation, 1G quickly scored another point. After that, Ellie of 5G tried twice to score, but both attempts were blocked by Ellie, the goalie for 1G. Ellie didn’t score on Ellie, and Ellie wouldn’t let Ellie score.

The whistle sounded to notify everyone that it was half-time. The ladies of 5G took a water break before getting back in the water—they had switched sides so 5G was shooting in the deep end again. Selah asked her team, “Are you ready 5G?” three times in a row—each time 5G cheered slightly louder than before until they were practically screaming.

In the third quarter, 1G’s Kelley made an excellent corner shot that just barely slipped past Christina’s hands, giving 1G a 3-1 lead.

A little later, Mr. Irwin was coaching 1G in the deep end as 5G made their way down with the ball. Ellie of 5G passed to Ella who dribbled the ball down and took a shot. The ball ricocheted off the goal and landed directly in front of Selah who threw it at the goal and scored another point for 5G—the score was 3-3!

1G then scored another point, but 5G quickly redeemed themselves, tying the score yet again.

I kept getting wet because the ladies of both dorms were wildly thrashing and furiously splashing as the players desperately tried to break the tie—and I was on the edge of my puddle-ridden seat. They were in the final minutes of the last quarter. I watched intently as Ellie of 5G got the ball. She dribbled down a bit and then passed the ball to Selah. Selah then made a great pass to Ella. With her teammates cheering for her and 1G’s defenders closing in, Ella picked up the ball and made a powerful shot that narrowly slipped past the goalie and scored a point for 5G—making the score 5-4!

With 10 seconds on the clock, 1G tried desperately to score a point, but 5G’s Ellie did not let that happen—5G was victorious!

Once 5G was ready, we all headed off to the next activity on our schedules: lunch!