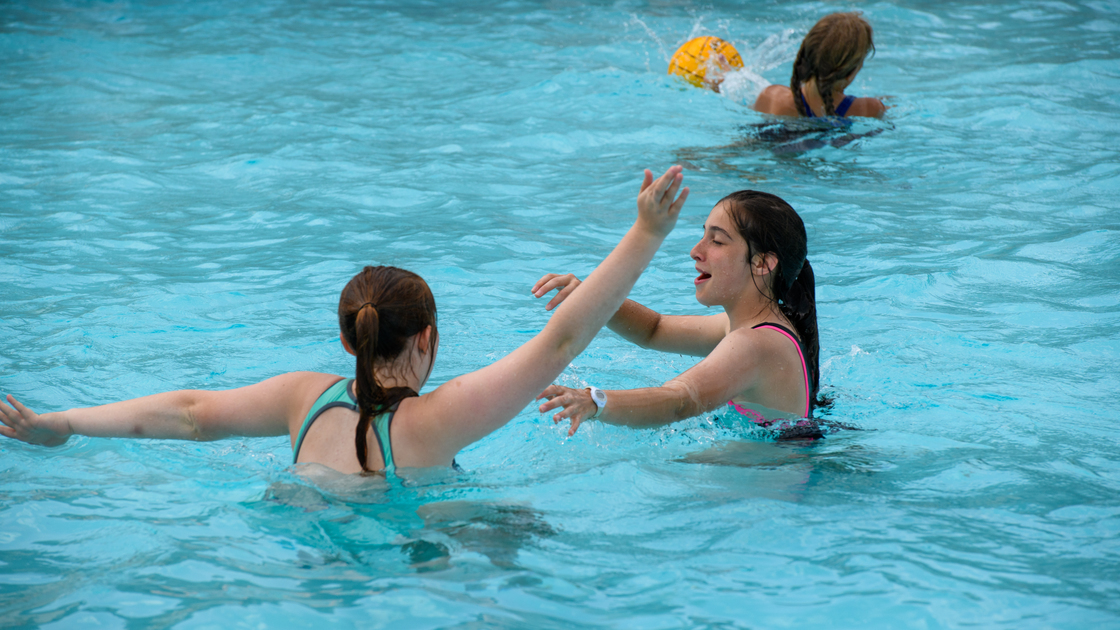 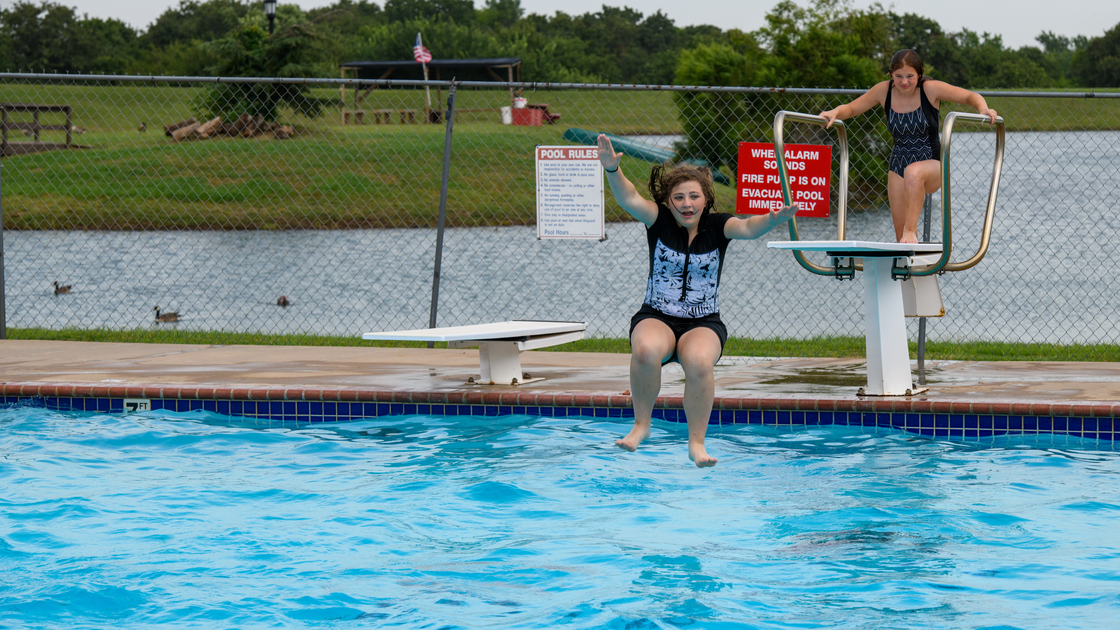 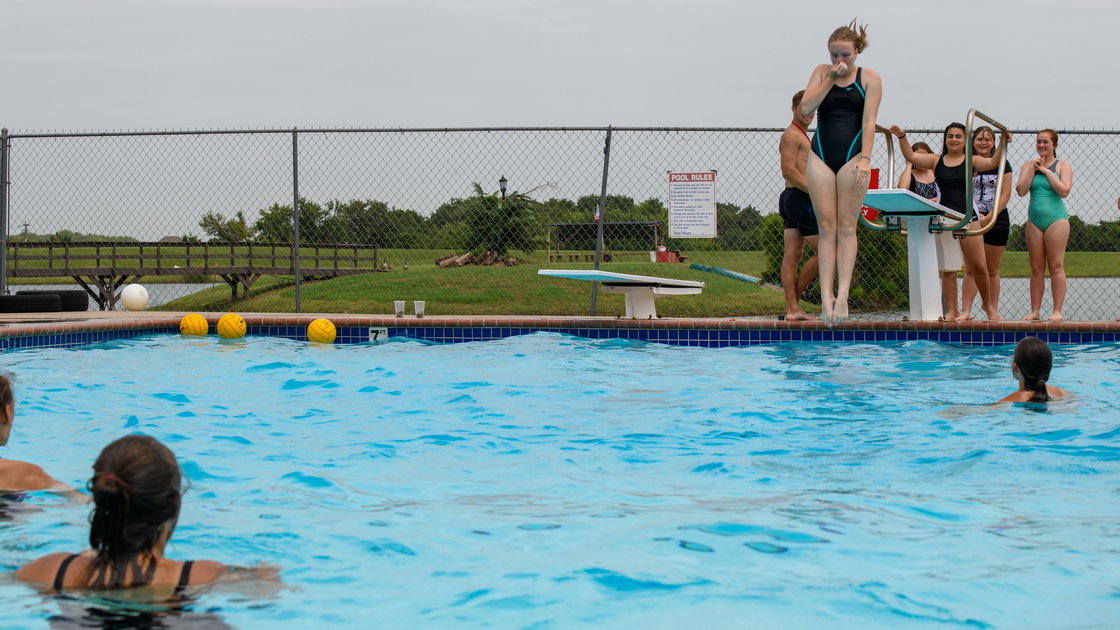 I saw the dark blue shirts of 6G approaching the pool as I stood on the pool deck. Much to my surprise, the counselor walking in front of 6G was not Miss Alexa Turgeon; it was Mr. Justice Brown with the purple Herbert W. Armstrong College flag that usually flies in front of the Hall of Administration draped across his back like a cape—don’t worry, he didn’t steal it. It was counselor swap day so the usual assistant counselor of 6G, Miss Heidi Rodis, was with 6B and the counselor of 6B, Mr. Justice Brown, was with 6G.

The swim class was for 6G and 1G, and it started with a relay race. Mr. Brown assigned every girl a starting position for the race. 6G was short three girls so Mr. Brown joined them and had two of the campers, Shannah and Sophia, swim two lengths of the pool instead of one.

“This is probably the most complicated thing we do at the pool,” Mr. Irwin, the head instructor of swimming, said with a smile as he walked around to the four groups of confused girls, all trying to figure out where to start. He explained how everyone is to swim the free-style stroke one length of the pool. Everyone must wait until the previous swimmer touches the side of the pool before the next relay swimmer can start.

Mr. Irwin told the girls in the deep end they could start against the wall if they did not feel comfortable diving into the water. This was met with an enthusiastic “Everyone dive!” from Mr. Brown.

The relay race progressed quickly, one swimmer after another swimming the length of the pool. Skye of 6G got slightly off-course, heading in a diagonal across the pool instead of a straight line. Her dorm-mates yelled out her name, which she must have heard because her face popped out of the water, and she corrected her course.

6G finished first with a time of 4 minutes and 2 seconds—beating the camp record for this year!

After the race, the ladies took a water break. Mr. Brown headed over to the music speaker and played the country song “Dirt on My Boots,” by Jon Pardi. It was at this point that I looked toward the soccer field to see what was going on there and noticed 3 landscapers walking towards the field house and one more landscaper, a little further away, riding a bike up the steep hill leading to the soccer field. The music in the background played as I watched the posse of landscapers, with actual dirt on their boots, walk toward us. I couldn’t help but laugh—it’s the little things in life.

The next challenge in the swim class was to see how long campers could hold their breath while swimming fully submerged under water down the length of the pool, starting in the deep end. Skye and Kamren of 6G both went all the way to the 3 foot marker, which is about ¾ of the length of the pool, and Shannah of 6G went the furthest of her dorm-mates, making it just a little past the 3 foot marker.

The last girl to go was Tori from 1G. At this point, Camp Director Wayne Turgeon joined us on the deck of the pool at the deep end. Tori swam the full length of the pool and then turned around and swam half the length of the pool back before coming up for air. Mr. Turgeon yelled, “New record!” as everyone cheered.

After that, Mr. Turgeon left, and the campers were then given time to free swim. Several girls jumped off the diving board, others played water volleyball, and a small group worked on their water polo skills.

As is common for almost every free swim, people were challenged to belly flop—one of the most painful, yet highly requested swimming activities of all time. Mr. Irwin and Mr. Brown were the chosen sacrifices. Not willing to back out of a challenge, they made their way onto the diving board and fell into the water. Mr. Irwin flopped first and then Mr. Brown followed with a painful sounding clap as he smacked the water. I cringed—that hurt me, and I was just watching.

A little later, Mr. Brown was teaching several girls how to do front flips off the diving board as I sat with Miss Turgeon and Miss Terrell, the counselors of 6G and 1G. When I looked up, Madison from 6G was on the diving board, and I heard Mr. Brown say, “Pain is just weakness leaving the body.” Madison admitted she was scared, but she tried to do a front flip anyway to no avail. Unwilling to give up, however, Madison did it again; this time she was slightly more successful. She later told me, “Miss Turgeon told us, ‘The only thing keeping us from conquering our fears is fear itself.’ That’s why I did it.”

Sophia of 6G got the ticket for the class. Before heading to lunch, Mr. Brown led 6G in a cheer: “Splish, splash, I was taking a bath. Doo doo doo doo.” Of course, it sounded slightly more musical than I can convey here in writing. It also included a synchronized wiggle move on every “doo,” but I don’t think that was planned—more of a subconscious happiness.