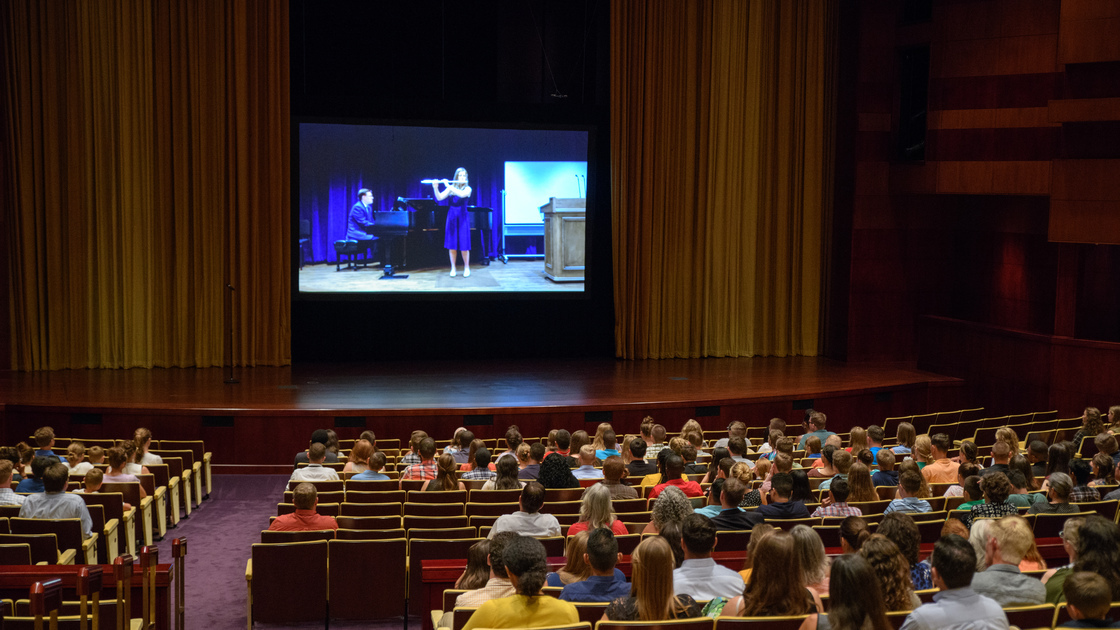 Teens from around the world competed in the performing arts portion of the Teen Talent Contest this year, held in Armstrong Auditorium, with approximately 250 friends and family in the audience. For the first time, the competitors sent in recordings of their performances ahead of time instead of performing them live. This allowed for those who cannot travel to enter the contest as well. The performances were edited in a video that included two categories: music and dance.

There were fifteen performances in the music category performed on a variety of instruments such as the harp, piano, violin, clarinet, flute, viola and voice. The varying styles and skill levels were refreshing to see as more young people are competing in the contest—now we just need more trombonists :).

Skye, a first-time camper and first-time performer in the contest, played “Toccata” by Susan McDonald on the harp in the first video presentation of the night. Next, Evan played a sonata on the clarinet followed by Sofie playing a Spanish-themed piece on the violin. Aiden, Ben, Ellie, and Peter performed piano compositions from various composers such as, Chopin, Beethoven and Bach. Zeke then played a piece on viola. After him, Ethan played Prelude and Fugue in B flat major by Bach on piano; then Zeke performed again, but this time he played violin. The last performer of the 13-15 age group was Leah, who played the flute.

It was interesting to see the various environments that the contestants recorded their pieces in, such as homes, the music building on campus here in Edmond, and even Armstrong Auditorium itself—it was kind of funny to watch a recording of a performance that happened in the very room the audience was in. One was recorded in Edstone, England, where Jude played a piano solo by Rachmaninov. Hannah, singing “Santa Lucia,” was next, followed by Zoe on violin and then Micah on piano.

The other category of the night was dance. There were nine competitors in this category, and it included two types of dances: Irish dance and ballet. Irish dancer Ellie performed first, followed by Hailey who performed a self-choreographed pirate dance—which is still in the Irish dance category—to the theme song of the movie “Pirates of the Caribbean.” At this point, several people perked up; the guys around me were especially excited when they recognized the familiar tune. Following these two performers were several more Irish dances performed by Zach, Savannah, Leah, Erica and then Jude. Some of the dancers had also competed in the music category—very talented teens indeed. The only non-Irish dancer was Hannah, who did ballet, dancing “Ramona” by Glazunov. Zoe, the last performer of the evening, wrapped things up with an Irish dance.

In total, the Teen Talent Contest lasted about an hour and a half. It is a wonderful opportunity for God’s youth to have a chance to perform and compete in this way. The video entries worked really well and allowed more teens to enter the contest from around the world. Keep developing those talents, teens!