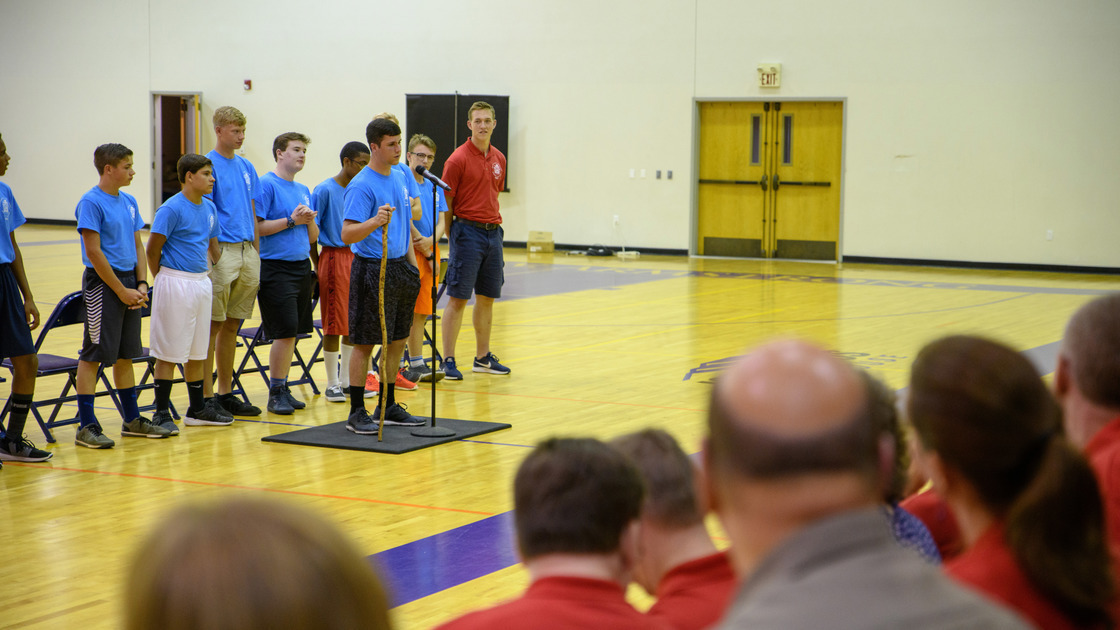 “I have the easiest job in the whole world because I go first,” asserted Camp Director Wayne Turgeon. The time had come for another PYC Stick Night—a tradition that has been continued ever since the first PYC in 1992. All the activity heads, counselors, assistant counselors and campers gives their name, age, where they are from, how many camps they have been to, and what their goals are for camp.

After explaining the activity, Mr. Turgeon introduced himself and his wife, and told everyone that they have been married for 27 years. Then, unexpectedly, Mr. Turgeon leaned over and kissed his wife—taking many for surprise and leading to a loud cheer from the crowd. He then shared his hope of wanting to help everyone love God the Father and Jesus Christ, and to, just like them, choose Jerusalem.

Mr. Turgeon then passed the stick to Assistant Camp Director Eric Burns who walked up to the microphone with his wife by his side. He turned to face her, smiled as he gazed into her eyes, and then… he shook her hand. Laughter erupted from the crowd. They were followed by their son, Operations Manager Dan Burns, with his man-child Roan on his dad’s shoulder and his wife, Emily, by their side.

Many of the staff members’ goals included wanting the campers to stay safe and have fun. Volleyball instructor, Daryle Hochstetler said: “We are here to serve you.” Some probably thought that was a terrible pun, as evidenced by the audible groan in the crowd mixed with the laughter, but I thought it was set up well and rather spike-tacular.

Then Basketball instructor Gino Chi and his crew took the stage. “I’m not going to say anything ‘Chi-zee,’” Mr. Chi joked, but it fell flat because no one understood it. Thankfully, Mr. Turgeon sent flag football instructor Jason Cocomise up to explain it!

Head Softball instructor, Brandon Nice, explained that campers will be hitting water balloons instead of softballs to learn how to swing the bat. He was hoping “to incentivize you all with water balloons.” [Note: incentivize means “make very wet.”]

After the staff members finished, the campers and their counselors were then each given their turn at the microphone. 1G was the first dorm to go. As campers went up and introduced themselves, one thing that stood out to me is just how many new campers there are this year. Out of the 120 campers attending, 52 are first-time campers!

Many of the counselors mentioned their hope of wanting to show their campers that God’s way of life really works and is truly amazing—to keep their eyes looking toward Jerusalem. Counselor of 3G, Eleanor Clarke, wants her campers to have the “best three weeks of their lives and not just a fun three weeks.” She wants them to “keep that vision, that Key of David vision.”

After a long stretch of rather standard Stick Night fair, 3B made a choreographed entrance replete with high-fives, fist bumps, hugs and camper grooming. Then 3B Counselor Tyler Verbout announced their dorm name, “Hezekiah’s Mighty Legion of Kings,” or “HULK” for short. Assistant counselor Matthew Barreiro offered to help his green-shirted campers “… Hulk smash any fears.” Shortly after, 4B Counselor Warren Reinsch introduced his dorm: “Hezekiah’s Heroic Historians,” a name that he asserted was chosen for deeper reasons than “Hulk smash.” Be careful Mr. Reinsch; you wouldn’t like Hulk smash when it’s angry.

As 5G’s Sofia introduced herself to the camp, her brother cheered mightily, “That’s my sister!” eliciting a response of “Captain Obvious!” from Mr. Turgeon.

A lot of the campers’ goals seemed to center around helping the first-time campers or serving others. Dylan, a camper from 5B, wants to be a leader and “serve any way they need me to,” and Luke, a first-time camper himself and also from 5B, said that he wanted to make everyone else enjoy camp.

Several of the campers shared some rather interesting goals that they had in mind for PYC 2018. Zeke from 5B wants to win the Landscaping award and “… fall in love… more with the Bible.”

Ashton from 3B said he hopes to be able to find a kangaroo on campus—happy hunting!

And Alexander from 4B doesn’t want to “be that guy who drops the girls in the middle of the dance floor.” Great goal—if I do say so myself.

After all of the dorms, it was Camp Director Wayne Turgeon’s turn to go up to the microphone once again to end the night. “If this weren’t so expensive,” he said, “I would drop the mic.” He didn’t.