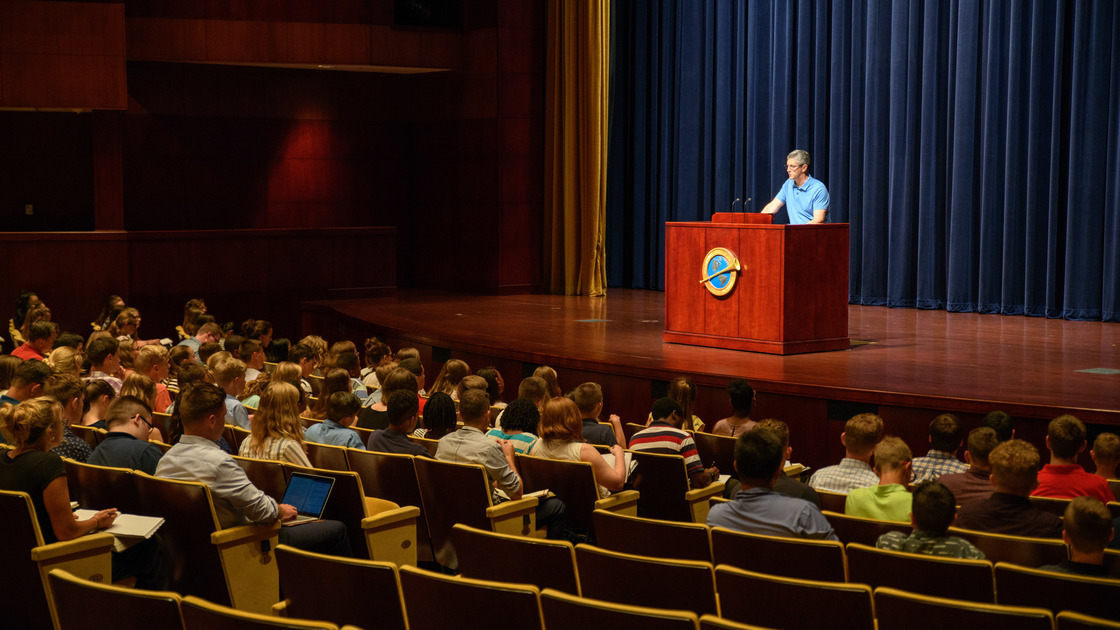 “The secret to this pyc is moooorrreee campers!” 4G counselor Brianna Weeks said, expressing her excitement with an enthusiastic variation of Julia Child’s famous “More butter!” quote. This led to a chorus of other workers all saying, “Mooorrreee,” and then laughing. This was arrival day, the day the pyc workers had been preparing for all week, and the workers were ready for the campers to come.

Early arrivals were few and far between. As the only ones in the gym for a while, campers Peter, Samuel and Daniel enjoyed a game of volleyball with a group of workers—and I joined in. We didn’t have to wait long; after lunch, campers began to stream in. What started out as one or two campers arriving quickly increased to several at a time—often with several vans arriving almost simultaneously to drop off campers.

With their bags in hand and smiles on their faces, campers walked up to the welcome table where they would meet Camp Director Wayne Turgeon and several of the workers. Campers were then directed to their counselor who would take them back to their dorm to drop off their bags and unpack before they were taken to the gym for games and fellowship.

After sitting outside for a while, I decided to join the campers and workers in the gym to see what was going on and maybe even to join in on the fun. I walked up to several campers and workers sitting on the edge of the stage in the John Amos Field House to talk with them. One of the workers, 5B counselor Harvey Powell, said, “It was a dynamic day of delightful campers arriving.”

I could see the family atmosphere as I looked around the gym. It was delightful to see the older, more experienced, campers going up to the younger ones to help them feel comfortable and at home. Volleyball, basketball, fellowship and laughter could be seen and heard throughout the gym.

At dinnertime, the campers were called to line up with their dorms. Mr. Turgeon stood in front of the campers and asked them if they were hungry—a question that was met with an enthusiastic “Yes, sir!” The campers were then corralled, dorm-by-dorm, into the dining hall, walking through a line of smiling workers with their hands up to form a “high-five line.”

After they finished eating, the campers went back to their dorms to change and prepare for that night’s activity: orientation in Armstrong Auditorium. Mr. Turgeon began by going over the rules of camp, and then gave an opening lecture on the camp theme: “Let the Stones Speak,” which was inspired by the June 2018 issue of True Education. He encouraged us to be more excited about Pastor General Gerald Flurry’s efforts in Jerusalem and the projects going on there—including the future project we will all be a part of: teaching in New Jerusalem.

After the lecture, the counselors took their campers back to their dorms for dorm orientation—a night of activities planned by the counselor and assistant counselor to help the campers get to know each other better. And with that, the busy day of arrivals was over.