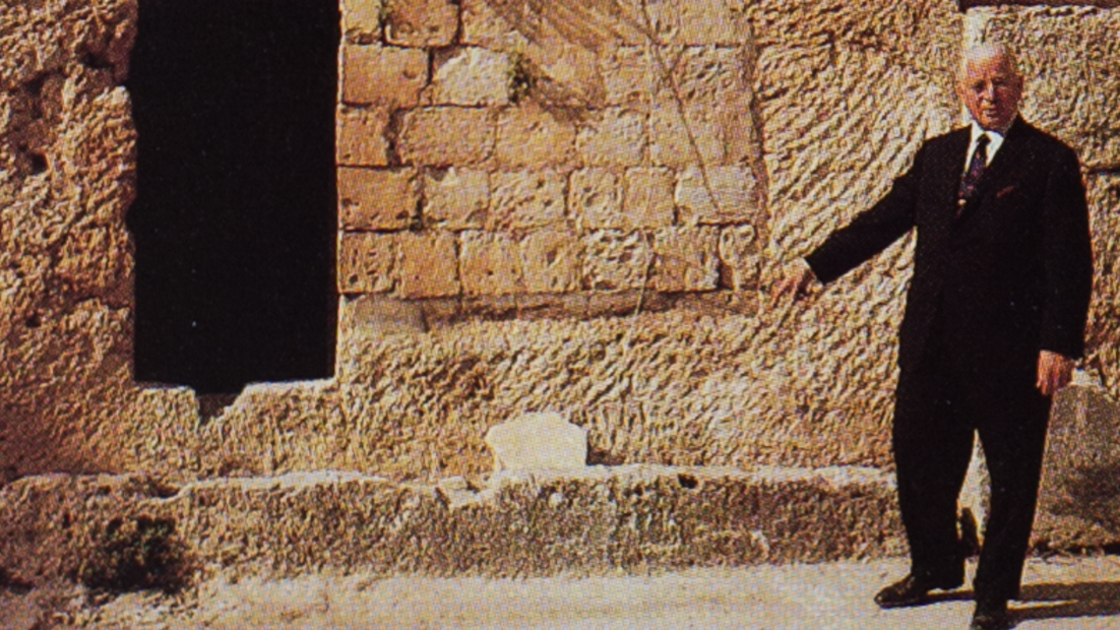 At 1 p.m. on June 23, 1984, the wheels of the Gulfstream ii jet touched down at Jerusalem airport. Waiting to greet Herbert W. Armstrong was Michael and Hanna Ravid, former Israeli General Consul in Los Angeles. Noticeably absent was the city’s mayor, Teddy Kollek, who was in Spain at the time, but sent his apologies to his longtime friend.

The Jerusalem Hilton hotel was the base of operations during this weeklong trip. Upon arrival, the unofficial ambassador for world peace was greeted by several floral arrangements from his Israeli friends. These relationships had developed most notably since his visit with President Zalman Shazar over 15 years earlier.

By 9:30 a.m. on Tuesday, June 26, Mr. Armstrong was on his way to the Israeli Presidential Palace for a meeting with President Chaim Herzog. The president had served his country as a major general and intelligence officer of the Israel Defense Force, while diplomatically he was Israel’s representative to the United Nations. Before becoming president, he had also served as the head of the Knesset.

During the 45-minute meeting, Mr. Armstrong and Mr. Herzog “discussed the worsening problems of the Middle East” and “the world economic crisis,” during which the president remarked “that it would not be long before the world’s economic system will collapse” (Worldwide News, July 16, 1984).

Thereafter, the pair exchanged views on international politics and a speech Mr. Herzog had given at the UN. During that speech, Soviet and Arab officials walked out in opposition, propelling Mr. Herzog onto the front pages of world newspapers.

“He remarked that he often walks by Liberty Bell Garden, a park which was developed with assistance from the Ambassador Foundation” (ibid). As the meeting drew to a close, the president recommended various new archaeological exhibits that might interest Mr. Armstrong. He also presented Mr. Armstrong with a personal copy of his recent book, The Arab-Israeli Wars.

“Mr. Armstrong presented the president with a piece of Steuben crystal titled The Kingfisher. The piece is tear-shaped with a kingfisher bird etched deeply into the surface. On the president’s desk was another piece of Steuben that the group recognized as The Ice Fisherman, a limited edition” (ibid).

After the meeting with the president, Mr. Armstrong was driven to the famed Chez Simon restaurant. Here he lunched with former president of Hebrew University Prof. Benjamin Mazar and Executive Secretary of the Israeli Exploration Society Joseph Aviram.

These two men had been friends of Mr. Armstrong’s since 1968, when then-President Shazar sent them to Ambassador College in Pasadena, California, for planning meetings for the college’s involvement in excavations of Jerusalem.

As gifts, Mr. Armstrong was presented with three publications. The first, edited by Professor Mazar, was Recent Archaeology in the Land of Israel. The second was written in honor of Dr. Aviram and the work of the Israeli Exploration Society, while the third, titled Disovering Jerusalem, was presented by Dr. Avigad.

Afterward, Mr. Armstrong returned to the Hilton to research the ongoing world economic malaise, and used this information in preparation of pending television episodes of The World Tomorrow.

Later that afternoon, Moshe Kol met with Mr. Armstrong regarding the International Cultural Center for Youth, which the Ambassador Foundation supported financially. The pair discussed how the center is encouraging the fostering of “positive relations” between Arab and Jewish children.

Mr. Armstrong spent Wednesday, June 27, exclusively preparing material for World Tomorrow broadcasts. His mind was on pointing viewers to how the current economic crisis was making the way for future Bible prophecies, and reminding them of the rise of Napoleon Bonaparte, Adolf Hitler and Benito Mussolini during such times of financial uncertainty in the recent past.

That night, at Mr. Armstrong’s invitation, his Israeli friends came to the hotel suite for a private viewing of one of the Young Ambassador Festival Film musical presentations.

Responding to President Herzog’s suggestion, at 10 a.m. on Thursday, June 28, Mr. Armstrong was driven to Jerusalem’s Burnt House excavation. “Excavated in January 1970, by Professor Avigad, the ruins of a first century a.d. Jewish home bear witness to the Roman destruction of Jerusalem in a.d. 70. The excavated remains are charred from fires set by the Romans, and the rubble and debris of the home confirm the historical accounts written by the first century Jewish historian Josephus and others” (ibid).

A high point of the trip came on the Sabbath of June 30. Services were conducted in the Ein Gedi room of the Hilton hotel. In addition to those essential personnel traveling with him, Mr. Armstrong invited 75 Ambassador College students and faculty who were currently involved in the summer excavations in the historic capital city.

The same edition of the Worldwide News reported, “Mr. Armstrong focused on prophecy during the sermon, presenting an overview of historical events leading to the present. He explained how the economic crisis would eventually prompt Europe to unite. He then went into the book of Revelation, explaining events shortly to come to pass.”

With much accomplished on this trip, from preaching the gospel to Israeli leaders to ongoing endeavors of the Ambassador Foundation to continued archaeology developments, Mr. Armstrong flew out of Israel on Sunday, July 1, bound for London, England.

For more about the open doors God afforded His ambassador for world peace, download our free booklet A Warm Friend of Israel.