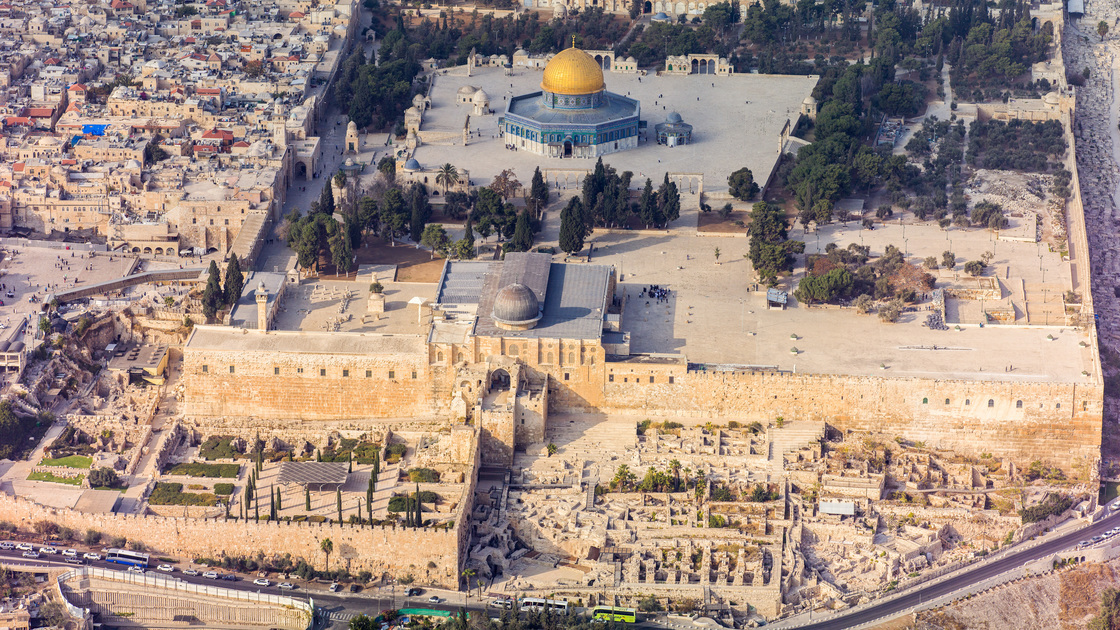 After spending five days and four nights in Jerusalem, as he so often did, Mr. Armstrong shared his experience with supporters in a letter of August 19, 1976. “Many times I have said, “Keep your eye on Jerusalem and the Middle East.” From now on that will be the focal point of World Happenings.”

He drew his readers attention to the God inspired words of an ancient prophet who foretold of the city’s creator temporarily hiding His face from it. “They come to fight with the Chaldeans, but it is to fill them with the dead bodies of men, whom I have slain in mine anger and in my fury, and for all whose wickedness I have hid my face from this city” (Jeremiah 33:5).

However, he emphasized the Divinely inspired future for Judah’s capital by quoting another Hebrew prophet. “Cry yet, saying, Thus saith the Lord of hosts; My cities through prosperity shall yet be spread abroad; and the Lord shall yet comfort Zion, and shall yet choose Jerusalem” (Zechariah 1:17).

“Jerusalem is a city Important to God—it ought to be important to us! So I want to tell you about my most recent visit there. It is a city I have visited many, many times” he wrote.

Mr. Armstrong then took a reflective tone recalling his first visit to the city in 1956 when he touched down at Atarot Airport. He didn’t stay long as this was just a short stop for his flight from Cairo to Baghdad. This was the first time his feet touched Jerusalem’s soil. His wife Loma and eldest son Richard traveled with him on that initial entry to Judah. On their return flight the Armstrong’s were able to visit the old city which was in Arab hands at that time.

Twelve years later on December 1, 1968, he was in the palace of President Zalman Shazar formalizing a historic agreement of joint participation between Ambassador College, Hebrew University, and the country’s Archeological Society.

This partnership centered on the excavation at the eastern wall of the temple mount. As the project ramped up from 1968 to 1970, Israeli General Yigal Yadin referred to the frequency of Mr. Armstrong’s trips to Jerusalem as “monthly visits”.

The first day of his visit in 1976 was a Friday, and began with a meeting Mayor Teddy Kollek at Jerusalem Hotel. Then came a tour with the mayor in sections of the old city, Tower of David, the Citadel, Jewish Quarter, lunch at a restaurant, and finally to the site of what was to become Liberty Bell Park.

On the Sabbath he delivered a Bible Study at his suite in the Jerusalem Hotel with 30 in attendance. There was a small regular congregation in the city but no local pastor at that time.

“I gave them an hour-and-a-half bible study on Jerusalem: Past, Present, and Future” he wrote in that same letter. “I think you’ll find a brief outline of that study helpful, interesting and enlightening—if you’ll take the time to take your own Bible to carefully read all the biblical passages, In their context. I shall give you here the biblical passages”.

After sunset that evening, Mr. Armstrong hosted a dinner for government and education officials with whom he had forged relationships with over the past eight years. The 45 attendees included cabinet ministers Moshe Kol, Gideon Hausner and his wife, Army General Yigail Yadin, and archeologist Professor Benjamin Mazar.

Sunday afternoon was spent at the home of Professor Mazar meeting with other officials related to the joint archeology project between Ambassador College and Hebrew University. That evening consisted of a special dinner with the Panovs ballet dancers who had performed at Ambassador Auditorium the year before. They were originally from Russia but later defected to Jerusalem. Accompanying Mr. Armstrong was the former Consul General at Los Angeles, now Ambassador, Michael Ravid and his wife.

“But Monday was our big day—our meeting with Prime Minister Yitzak Rabin” he wrote of this general, statesman and fifth prime minister of Israel.

“Usually it is contrary to protocol in many countries to see both the President and the Prime Minister on the same visit. This time I did not see President Katzir, but I had already had two or three fine personal meetings with him, and he sent to me his personal regards and best wishes on this visit.

[Mr. Rabin] “met me and our party with a warm and cordial smile. “Mr. Prime Minister,” I said, “I’m sorry it’s been such a long time before I’ve had an opportunity to meet you, but it is indeed a pleasure and an honor.”

“Well, Mr. Armstrong,” he smiled in return, “it’s just happened that I’ve been in your country or Europe or some other place every time you’ve been here since I became Prime Minister. But of course I know a great deal about you, and we all do deeply appreciate your interest in Israel.”

“The entire meeting, lasting perhaps 45 minutes, was warm and friendly. We spoke about the two jet planes that have more or less “commuted” between Jerusalem and Cairo… He was very appreciative of my efforts toward world peace, and especially in bringing nations like Japan and Israel closer together—also Kenya and Israel; and my friendships with Arab chiefs-of-state; and efforts toward a better approach to harmony and understanding between them and Israel. Actually there has been a slight lessening of tensions between some of my Arab friends—heads of governments—and Israel. And through the aicf we are supporting the iccy (International Cultural Center for Youth) directed by Minister of Tourism Moshe Kol—bringing about a new and friendly relationship between Israeli and Arab youth, especially in Jerusalem.”

Mr. Armstrong boldly told his supporters that 42 years ago God had appointed him to the “great commission” to declare His gospel message and the soon coming establishment of the kingdom of God (Matthew 24:14). He reiterated the blessing of doors swinging open particularly from 1972 onward in reaching key nations.

He concluded that August 19, 1967 letter with a powerful exhortation. “Brethren, this is a call from the living Christ to wake up.”

“God has held back the four winds of the Trumpet plagues that were to usher in His coming at the 7th trumpet (see Rev. 7). He held them back, so that He might open the doors to kings, presidents, prime ministers, even Emperors—so that His message could go into their nations to their peoples.

“That is what I have been doing ever since! I have had, beginning at age 80—just as God used Moses to lead the Israelite slaves out of Egypt when he was 80—to prophesy again before many peoples, nations, tongues and kings. It is the most strenuous job of my entire life.”

He concluded by pointing to Jesus Christ’s words of exhortation recorded by the Apostle Matthew in chapter 25 and verse 21. “His lord said unto him, Well done, thou good and faithful servant: thou hast been faithful over a few things, I will make thee ruler over many things: enter thou into the joy of thy lord.”

Yitzhak Rabin served two terms in office, 1974–77 and 1992 until his assassination in 1995. According to Revelation chapter 20 he will be resurrected to mortal life once more. He will remember that meeting with the unofficial ambassador for world peace. He will learn of the continuation of that commission to prophesy again as accomplished today by Gerald Flurry. And he will recall that Divine message of the good news of Christ’s return to establish world peace with His capital at Jerusalem, the city of peace.