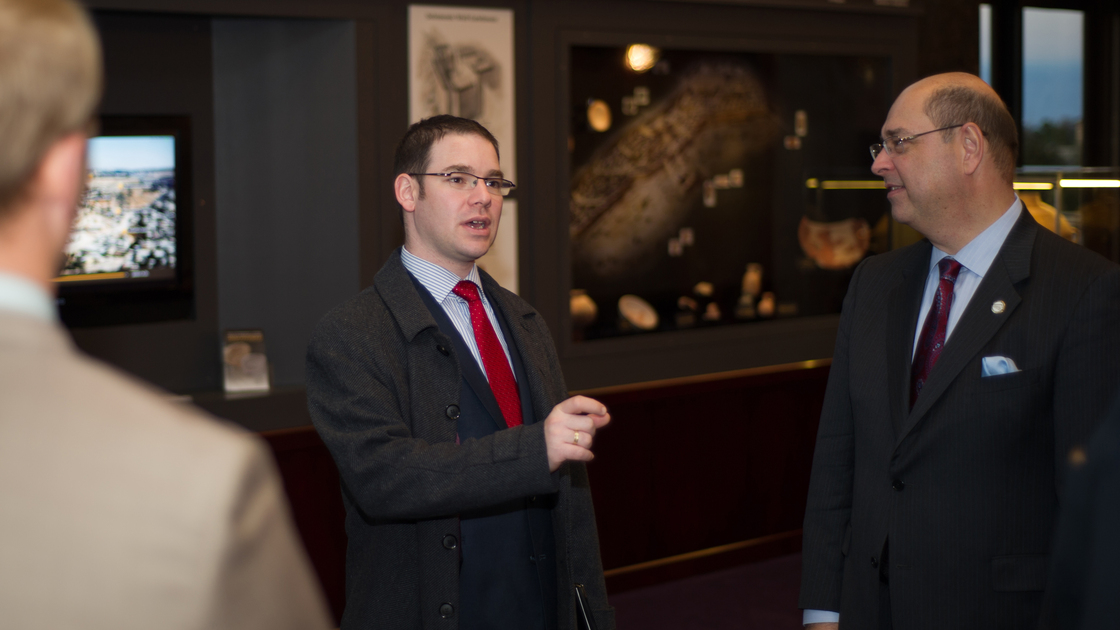 Agranov spent the majority of his hour-long visit viewing the exhibit’s displays, photos, an interactive map and videos, which portray the history of Jerusalem from the time of King David through the work of the Prophet Jeremiah. The exhibit features 26 artifacts from the First Temple period. Like the more than 4,000 previous visitors to the exhibit, Agranov viewed 2,600-to-2,700-year-old earthen juglets, lamps, figureheads, and two jar handles bearing royal seals. The deputy consul also viewed the centerpieces of the exhibit, two bullae (clay seal impressions) that date close to the time of Jerusalem’s destruction in 585 b.c. by King Nebuchadnezzar of Babylon.

Armstrong International Cultural Foundation marketing director Shane Granger said the deputy consul showed a keen interest in the archaeology of Jerusalem and the City of David. Granger and assistant curator Brent Nagtegaal guided Agranov through the exhibit, along with Armstrong International Cultural Foundation head usher Edwin Trebels, who explained the history of the bullae. One seal is inscribed with the Hebrew name “Gedaliah, son of Pashur,” and the other bears the name of “Jucal, son of Shelemiah.” Both of these names appear together in the first verse of Jeremiah 38, which records that these two Judean princes persecuted, imprisoned and tried to execute the Prophet Jeremiah. Trebels said Agranov displayed a special interest in the bullae because they show “direct evidence of the biblical account.”

Nagtegaal and Trebels spoke from experience about the dig site where the bullae were discovered. They were among the first Herbert W. Armstrong College students to travel to Jerusalem in 2006 and excavate with Dr. Eilat Mazar. Mazar is the Israeli archaeologist who discovered the two bullae, as well as evidence of King David’s palace, Nehemiah’s wall, part of Solomon’s royal complex, and a conduit that could have been used by David’s men in the original conquest of the city. She also uncovered the earliest alphabetical inscription ever found in Jerusalem and is well-known for discovering the 7th-century a.d.Ophel Treasure.

Nagtegaal worked as an area supervisor for Dr. Mazar during her Ophel excavations in 2012 and 2013. He discussed with the deputy consul his experience there and the current political tensions in the city that are currently hindering further excavation.

Toward the end of the exhibit, Agranov viewed a photo wall of the college’s involvement in Jerusalem archaeology, along with that of its namesake. Herbert W. Armstrong worked with Dr. Mazar’s grandfather Prof. Benjamin Mazar during his excavations in Jerusalem in the 1960s and ’70s. Since 2007, about 40 Herbert W. Armstrong College students have assisted his granddaughter on five excavations in the City of David and the Ophel.

Agranov also took a short tour through the auditorium’s theater and observed other highlights, including the crystal candelabra originally commissioned by the shah of Iran and Swarovski crystal chandeliers. Agranov characterized the auditorium itself as “very impressive.”

Agranov, born in Russia, moved when he was a child with his family to Israel in 1990. He has served in diplomatic capacities in Russia, Kazakhstan and Angola. He assumed his current post in August.

Consulate representatives contacted the foundation on January 13, inquiring about a visit to the auditorium during the deputy consul’s tour of Tulsa and Oklahoma City. Agranov said his consulate staff gave Armstrong Auditorium a high recommendation.

“Our attaché told me that this is the best place in Oklahoma,” he said.

Previous to Agranov, other representatives from the Consulate of Israel to the Southwest United States have visited the Herbert W. Armstrong College campus, including Beylanesh Zevadia (now Israel’s ambassador to Ethiopia) and Amb. Yoram Ettinger (ret.) in 2008, cultural attaché Ben Stinsman in 2011, cultural attaché Guy Cohen in 2012, and Amb. Meir Shlomo in 2014.

The Seals of Jeremiah’s Captors Discovered exhibit continues through October 2015.