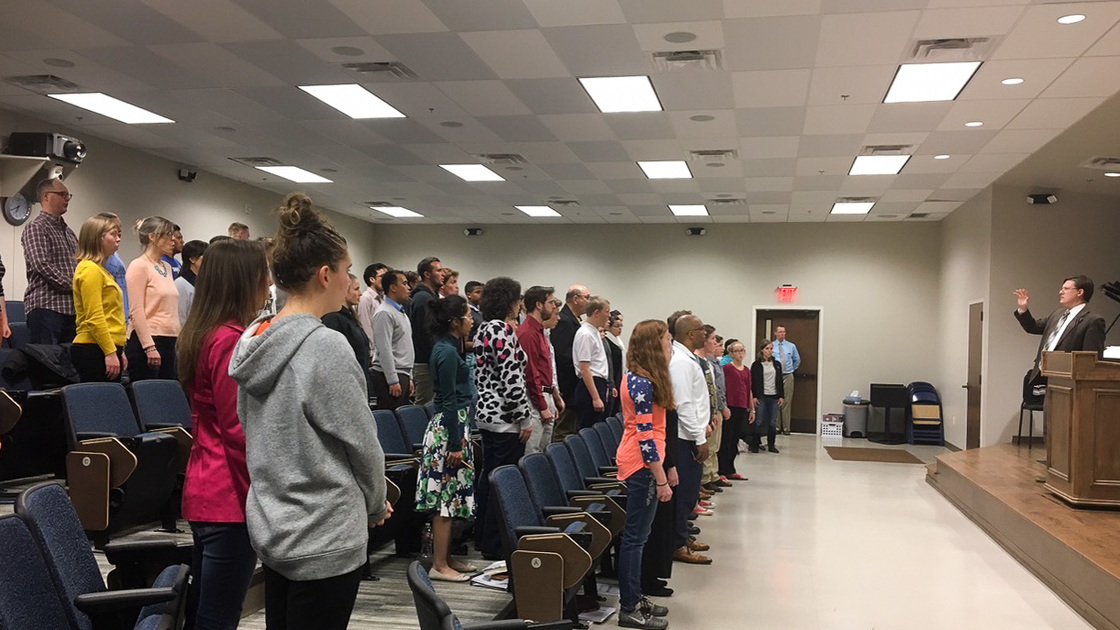 EDMOND—The Armstrong Choral Union is in its 20th week of rehearsals in preparation for performing the oratorio Abraham on April 19 at Armstrong Auditorium. The choral union includes 68 singers: students and faculty of Herbert W. Armstrong College, students from Imperial Academy, and other members of the Philadelphia Church of God.

The choral-orchestral work relates the biblical account of Abraham, portrayed by three main soloists. Composer and music director Ryan Malone will sing the part of Abraham. His wife, voice instructor Paula Malone, will sing the part of Sarah. Mezzo-soprano Pamela Williams of the Chicago Lyric Opera has been hired to sing the part of Hagar. Mr. Malone said that a soloist of a high caliber was required to be clearly heard over an orchestra for sustained periods. The choral union, conducted by assistant music director Mark Jenkins, will portray Melchizedek, angels and people.

The music department has hired an orchestra that includes many members of the philharmonic. Mr. Malone’s son, Seth will also play third-chair cello in the orchestra.

Abraham will be the second original oratorio composed by Mr. Malone and performed in Armstrong Auditorium after Song of Songs, which debuted in January 2012 and was performed again in April 2016. Mr. Malone also composed the five musical theater productions led by the department and performed by students, faculty and other pcg members: Jeremiah—a Musical and Step-Dancing Extravaganza (2012), David—The Endless Throne Begins (2013), The Book of Isaiah (2015), Morning Star (2016) and The Widow’s Might (2016).

Mr. Malone says that members can pray for the health of everyone involved as “we rely very heavily on a small number of people to get things done,” not only for the oratorio but for the department’s other projects. He also said that members could pray for the “efficiency of the rehearsals.”

The performance of Abraham is included as part of the Armstrong International Cultural Foundation’s 2017–2018 performing arts series.