How Did Christ Die? And Why Is It Important?
Without Christ’s life, death and resurrection, humanity wouldn’t have a future.
By Wayne Turgeon • March 2009 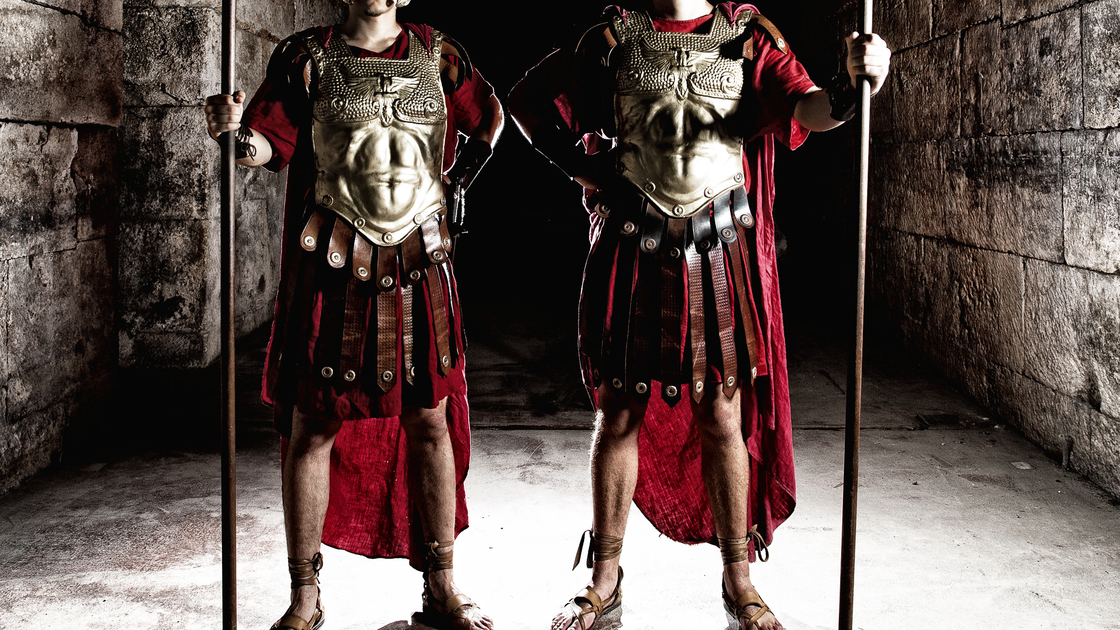 Jesus Christ died a shameful death for all of our terrible sins. But how could this strong, physically fit human being have died before the miserable thieves who were crucified alongside Him?

“The Jews therefore, because it was the preparation, that the bodies should not remain upon the cross on the sabbath day, (for that sabbath day was an high day,) besought Pilate that their legs might be broken, and that they might be taken away. Then came the soldiers, and brake the legs of the first, and of the other which was crucified with him. But when they came to Jesus, and saw that he was dead already, they brake not his legs” (John 19:31-33).

That high day in a.d. 31 was the first day of the feast of Unleavened Bread. It officially began at sundown, Wednesday evening, about three hours after Christ’s death. Roman soldiers were dispatched to break the legs of Christ and His companions so they would suffocate and the bodies could be buried before sundown (Deuteronomy 21:23). But they found Christ already dead. This was surprising news even to Pilate (see Mark 15:42-45). So how was this possible?

Many have wrongly assumed that Christ was dead before His blood was shed. Some believe and teach that Christ died of a “broken heart” and that the fluids that had collected around His heart only dribbled out a little blood mixed with water after He was struck in the side.

We will see from the Bible, however, that it was the severe and sudden loss of blood that caused His death. If His life’s blood was not poured out before death to completely blot out our sins, you and I do not have a Savior!

If Christ died of a “broken heart” due to His own physical weakness and suffering, that means He would have had His own physical sins to die for—instead of dying for our sins! He could not have qualified as our Savior. But we know that in Christ there was no sin.

Anciently, the Israelite slaves in Egypt could never have been delivered out of bondage if the original passover lamb had not been slain for sacrifice by having its blood shed.

Notice the original command in Exodus 12:4-6: “And if the household be too little for the lamb, let him and his neighbour next unto his house take it according to the number of the souls; every man according to his eating shall make your count for the lamb. Your lamb shall be without blemish, a male of the first year: ye shall take it out from the sheep, or from the goats: And ye shall keep it up until the fourteenth day of the same month: and the whole assembly of the congregation of Israel shall kill it in the evening.”

As the lamb was a type of Christ and had its own blood shed, so Christ also had to shed His own blood to pay for our sins—something animal sacrifices could never do. It required the life of the Creator, which is greater than the sum total of all our lives. “… For even Christ our passover is sacrificed for us” (1 Corinthians 5:7). If not, we are without a Savior and, therefore, without hope.

According to Hebrews 9:22, without the shedding of blood there can be no remission of sins. God requires that we have a broken, humble spirit—but that doesn’t pay the penalty of our sins. What does pay the penalty is the Passover—Christ—who shed His blood. Leviticus 22:8 and Deuteronomy 14:21 tell us that we are not to consume any animal that dies of itself. If the passover lamb had died of itself, it could not have been eaten. Similarly, if Christ died of Himself, His blood was not shed for us. God’s plan demanded He be killed by the shedding of blood.

In John 19:33, we see that Christ was already dead by the time the soldiers came to Him, thus eliminating the need for them to break His legs in order to hasten His death. These men did not realize that they helped fulfill this prophecy: “He keepeth all his bones: not one of them is broken” (Psalm 34:20).

Sacrifices instituted under Moses required that the animals’ bones were broken when their bodies were cut up and placed on the altar. But the passover always remained whole until it was eaten, because it foreshadowed Christ’s sacrifice—not having any of His bones broken—yet another proof that Christ is our Passover.

Isaiah 53:7-8 is the crucial Old Testament passage that describes Christ’s future death. He would be brought as a lamb to the slaughter, meaning His blood would be shed. That this prophecy refers to Christ is confirmed for us in the New Testament (Acts 8:32-35). Christ, our Passover, was correctly typed by a lamb led to the slaughter.

“He was taken from prison and from judgment: and who shall declare his generation? for he was cut off out of the land of the living: for the transgression of my people was he stricken” (Isaiah 53:8). Instead of “was he stricken,” most margins render it “the stroke was upon him.” The mortal wound of a spear, as we shall see, brought about His death, not a “broken heart.” Verse 12 shows that Christ “poured out his soul unto death,” not that He was already dead and then poured out His soul. The pouring out of His soul led to His death—not the other way around, as some suppose.

The Hebrew word for soul—nephesh—comes from the same word translated “breath” or “life.” The life is in the blood (Leviticus 17:11), which Jesus had to pour out unto death in order to fulfill His Word. The life of every man is in his blood, not in an immortal soul. Christ’s life was in His blood, like that of all men He created when He was the Word.

John 10:11 tells us that the good Shepherd gives His life for the sheep. Christ, the good Shepherd, was willing to lose His life—His blood—in order to redeem, or buy back, His “sheep.” He died for the sins of the whole world.

Taking the sin of murder as an example, the only way to pay for the sin of murder is by the shedding of the murderer’s blood (Genesis 9:6). Christ died by taking on Himself the very same penalty that would otherwise have been the murderer’s fate. For Christ to pay the penalty of murder for even just one murderer, He had to shed His own blood. Blood had to pour from His body while He was yet alive; not after His heart stopped.

The Moffatt translation contains the following which does not appear in the King James account in Matthew 27:49-50 (it does appear as a footnote in the Revised Standard Version): At the end of verse 49, it says, “Seizing a lance, another pricked his side, and out came water and blood.” It then proceeds to verse 50: “Jesus again uttered a loud scream, and gave up his spirit.”

This clearly shows that Christ expired after, not before, being struck with a spear. Striking Christ in the side was not some sort of flippant, after-the-fact gesture. It was the key reason Christ died. When you read the King James translation from verse 48 and include the missing passage from the Moffatt and other versions, the time sequence becomes unmistakably clear.

Zechariah 12:10 and Revelation 1:7 confirm that Christ’s death came from a lance, or spear, that pierced His side and shed His bodily fluids. In reference to Matthew 27:49, A Harmony of the Gospels, by A.T. Robertson, confirms that “Many ancient authorities add ‘And another took a spear and pierced his side, and there came out water and blood.’”

This missing sentence, found in most early manuscripts, was left out of the King James Version because of a controversy involving a false copy of Matthew’s Gospel used to try to justify the ecclesiastical independence of Cyprus. But, by the Greeks’ own admission, this verse was in their manuscripts as late as a.d. 510.

The King James translators didn’t include it because they, like many others, misunderstood John’s inspired description of Christ’s side being pierced. Ever since, many have falsely assumed that Christ’s side was speared after He died and then blood, mixed with water, gushed out.

Jesus did not die from a “broken heart,” but rather from the shedding of His blood. Isaiah 53 had to be fulfilled, as did numerous other prophecies identifying Him as our Savior. Had He not shed His blood, we could not have our sins forgiven.

Sadly, even though John records the same event, it has been mistranslated! “Then came the soldiers, and brake the legs of the first, and of the other which was crucified with him. But when they came to Jesus, and saw that He was dead already, they brake not his legs” (John 19:32-33). One could wrongly assume from verse 34 that a soldier then pierced His side. But if we go back to the original Greek, we can prove that Christ was speared before they came to break His legs.

When properly translated, the verse reads: “But [howbeit or for ] one of the soldiers with a spear [had] pierced his side, and forthwith came there out blood and water.” The Greek word for pierced is in a verb tense that does not denote the time of the action. John’s use of pierced alone does not tell us whether the soldier speared Christ then or if it had already occurred. The only way we can know with certainty that He was pierced before He was dead is by putting John 19:34 together with the corrected account in Matthew 27.

The Roman soldiers about to break Christ’s legs to hasten His death saw that He was already dead. John 19:34 gives us the cause of Christ’s death: Another soldier had earlier taken a spear and forcefully jabbed it into Christ’s side, causing blood, mixed with water, to pour out from the gaping wound. His blood was completely shed; it didn’t trickle out. Blood in His lower body and legs also drained from the nail wounds in His feet.

Christ became our Savior by thoroughly shedding His blood—His life—unto death. His dying such a painful, inhumane death was terrible, but there is some wonderfully great news as well. Christ, after fulfilling His own prophecy that He would be three days and three nights in the grave (Matthew 12:40), is now very much alive, serving us this very minute as our High Priest (Hebrews 8:1), making constant intercession for us at the right hand of our Father in heaven. Praise be to our Almighty, loving Father for resurrecting Him to eternal life, so all mankind can and will be saved!