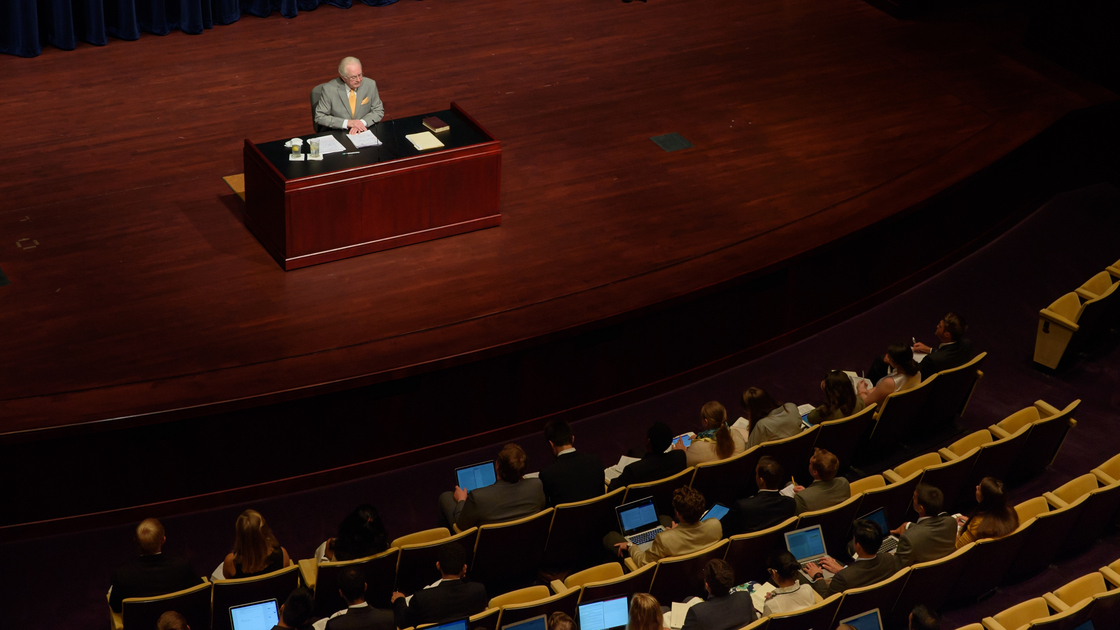 EDMOND—Herbert W. Armstrong College Chancellor Gerald Flurry delivered a lecture about the authority and legacy of the end-time Elijah on August 14. A total of 80 students, including 30 freshmen, listened live at Armstrong Auditorium and at the college’s campus in Edstone, England.

Mr. Flurry started his lecture by asking: Could you prove where God’s college is if you were asked? He then proceeded to answer that question by discussing how the mantle of Elijah, a symbol of the government of God, proves where His college is. The Prophets Samuel, Elijah and Elisha all had the same mantle of leadership over their schools that God’s college has today, he said.

Mr. Flurry read from 2 Kings 2, which regards the mantle of Elijah being given to Elisha. The students of the college that Elijah left behind quickly learned where the government was when they saw Elisha wearing Elijah’s mantle. Mr. Flurry said that the head of the Church and of the college does not change. Christ is always the Head, not any man, but the mantle shows the man through which God is working.

Mr. Flurry then read from 2 Kings 2:14. We have to know where the God of Elijah is first, he said, and then we can look for miracles. He said that new revelation is a miracle that comes from God, and if you receive new revelation, then you know where God is, you know where the mantle is, and you will see miracles in your life. Mr. Flurry made the point that even a young, teenaged Samuel could understand this, meaning that the college students he was speaking to could as well.

Mr. Flurry concluded by speaking about how God is making spiritual pillars to set the world on. The college works to educate the students for that purpose, he said. He added that if the lamp goes out, as members of the Worldwide Church allowed it to go out, the whole world is in darkness. Each member of the Philadelphia Church of God has a part to play in letting light shine through them, he said.

Mr. Flurry also reemphasized that the college exists to support the work of the Church, not the other way around. He said that the leaders who succeeded Mr. Armstrong in the Worldwide Church of God turned their focus to the college, pursued accreditation, and ended up closing the college. The college makes it possible to do the Work of God. Mr. Flurry said: It makes strong pillars of the people who embrace it. The education provided in lectures and work experience is in preparation of that future, he said.

Mr. Flurry ended his lecture with a goal for the students to adopt: Don’t let one word fall to the ground.