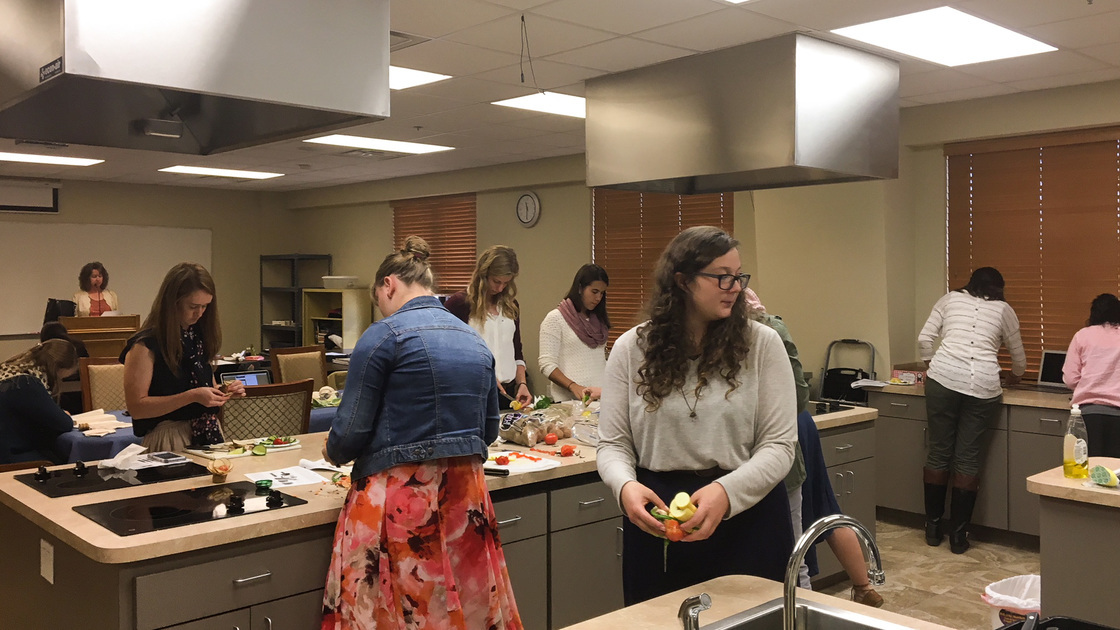 EDMOND—Herbert W. Armstrong College students of Home Economics and Basic Foods Studies have been using a specially renovated classroom at the Barbara Flurry Memorial Hall for the first time this semester.

When the building was built in 2006, its spaces were divided into four upstairs classrooms and a downstairs dormitory. One of the classrooms was then converted into a dance practice room, but it was no longer needed after the Dwight Armstrong Performing Arts Conservatory was completed in August 2016.

College and Imperial Academy administrators also began using the conservatory’s choir room for forums and assemblies and stopped using the largest Barbara Flurry Memorial Hall classroom, freeing it up to be split into three smaller spaces. The plan would create a total of five regular classrooms in the building, one of which could be transformed into a much-needed space for Home Economics and Basic Foods Studies.

Facilities manager Roger Brandon said that the actual installation of ceramic tile flooring, cabinets and other renovations was a simple process, but because the renovation was occurring in a school, it had to meet specific safety criteria in order to meet state building codes.

Less than a week before orientation for the new school year, one of the contractors, who had already submitted his plans to the fire marshal for approval, discovered an error and had to resubmit them. This would typically cause a six to eight-week delay before the inspector could schedule a final inspection. However, the plans were approved by the next day and the state fire marshal was able to approve the renovation on August 11. Orientation was on the 14th.

“God definitely intervened by showing us mercy in the eyes of the state’s plan reviewer,” Mr. Brandon said, “in that he voluntarily offered to look at the resubmitted plans as soon as he got them, allowing us to schedule our final and get everything passed in time for school.”

The new facilities mean that more sophomore students can participate in Home Economics class at the same time.

“Since the class began the second year of AC, we have been in a mobile home—except for part of last year when we met in one of the Barbara Flurry Memorial Hall classrooms,” instructor Laura Turgeon said. “Because the old place had only one kitchen, we usually had to split the class up where the other half met in the Turgeon home when we had cooking classes. The new classroom has an open floor plan, so it’s easy to get around since this year we have had the largest class to date.”

Basic Foods Studies instructor Deborah Leap also uses the new classroom with her junior and senior students. Previously, she had conducted the class in Mayfair, a dormitory building. Now, however, both instructors can keep all the supplies for the Home Economics department in the new classroom.

“The new classroom makes everything much more efficient, and the kitchen is absolutely beautiful,” said junior Brianna Weeks, who has taken classes in both situations. “Last year, we had Home Economics classes in at least four different locations. This year, we only use one classroom, and it has everything we need. There are many times in Foods class where we are cooking, eating and cleaning up to the last second before we have to rush off to the next class, and if we were still cooking in the Mayfair kitchens, we would have to rush across campus. Now, all we have to do is walk down the hall.”

The kitchen includes enough appliances for three groups of women students to cook at one time. Weeks added, “There is plenty of space, so no one trips over anyone else. And the new appliances make it even more fun.”