PYC 2017: The All-Stars Weekend Has Landed
The final days of PYC culminate in athletic showdowns.
By Lilian Harms • July 25, 2017 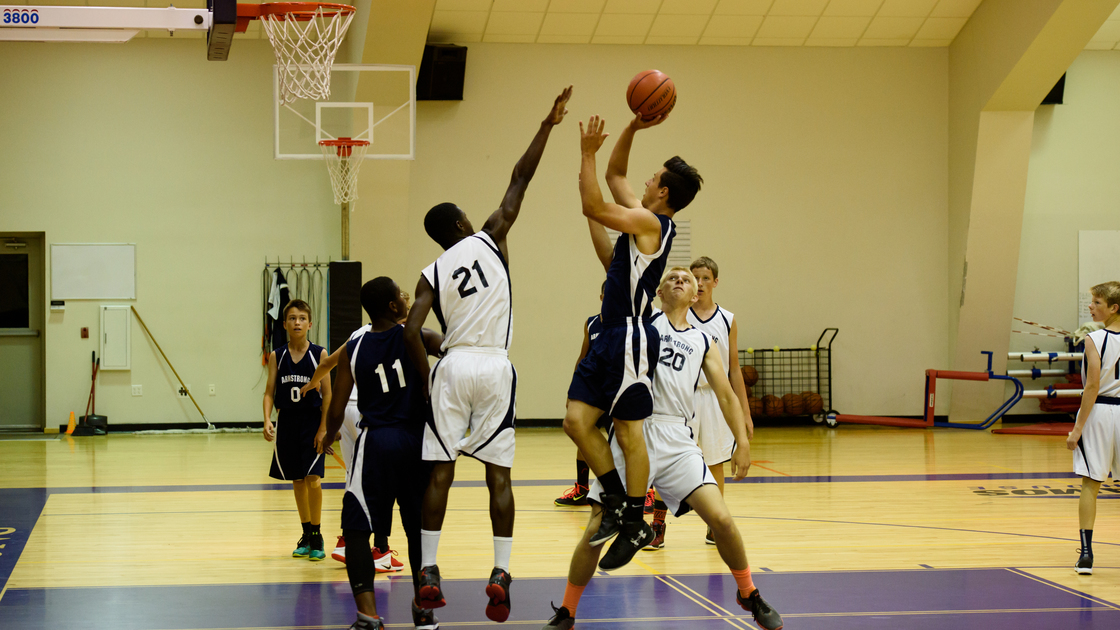 At the end of each pyc, a weekend is dedicated to showcasing the most skilled participants in each of the sports taught at camp, as long as we accept that archery, cycling, canoeing and water polo are not sports [Editor’s note: We don’t accept that.].

All-Stars this year started on Thursday evening with a flag football game, rather than the usual Saturday night basketball game. Mr. Grant Turgeon kept a running commentary throughout the game.

The orange team was coached by Flag Football assistant instructor Warren Reinch while the blue team claimed head instructor Jason Cocomise. As the game began, 4B assistant counselor, Matthew Kawalek, charged down the side line of spectators with an American Flag trailing above him.

Zeke, a player for the boys in orange, got kicked in the face with a cleat but survived with a cut across his nose. It seemed to hurt, but it didn’t appear that anything was broken, and I was thankful it missed his eyes.

A few minutes into the game, Sam, the blue quarterback, finally made a successful run into the end zone. Mr. Grant Turgeon called it a “downright cheeky cut.” This brought the score 7-0.

By halftime, Micah, the orange quarterback, was able to lead his team into a lead, leaving the score at 14-7. They scored again early in the second half, and but there was still time for blue to catch up.

Malik, an orange player, impressed everyone with his quick flag snatching. It seemed unlikely that anyone could get past him, and this didn’t bode well for blue. They needed a different tactic. Thirteen-year-old Calin ran into the end zone and caught the pass Sam made to him, bringing the score 20-13.

In the final ten minutes, the blue player Dylan made a score, making the game 20-19. The team debated whether or not to go for an extra two points or just the one point. The one point would be safer and would tie the game, and that is what blue opted for.

There was four minutes to go, and then two minutes. Would it end in a tie? But Micah saw a hole and he took on after it, ducking and dodging and spinning to avoid getting caught. He reached the ball over the end-zone line and the opposing team player Kyle managed to snatch a flag. The refs discussed and reviewed. Did the ball make it over the end zone in time?

Immediately following the football game, all of the campers, staff, and visitors made their way to the gym for the girls’ volleyball game. Unlike the boys, the players stayed in their usual dorm colors, leaving the teams with a multicolored rotating pattern on the court.

It took a moment for them to get going, but once they did, the ball kept flying. Back and forth it would go. Sometimes it would fall, and points would be counted. Twins Tara and Tory played on opposite teams; both have experience playing at home, making for a couple of exciting back and forth moments between the sisters.

The team coached by David Dodds won the first match. The second match was won by the opposing team, coached by Josh Sloan.

The third and final match was the closest yet. During volleyball classes at camp, the teams play to 21 and whoever gets there first wins. In an All-Star game, they play to 25. The score was 24-23 with Team Dodds in the lead by one point. Team Sloan came back and tied it up. The crowd stood up. Team Sloan scored again and the crowd went wild as the coaches yelled over the crowd explaining that you have to win by two points.

Behind me, 5G was cheering so loudly I couldn’t hear myself think. The enthusiasm spread through the whole gym. Team Dodds scored the next point, again tying it 25-25. Ella served the ball, and a point went to Team Dodds. She served one more time—the crowd held their breath—and the game was over. Kyle of 4B said that it “was a really exciting game.” Team Dodds had won 27-25, most certainly living up to the standard of an exciting game that the flag football players set.

From my perspective, it appeared that yellow had a very strong defense, keeping their blue counterparts from scoring. In the end, the yellow team won, leaving Mr. Reinsch two for two by way of games he has coached thus far.

The boys’ soccer game took place at the same time as the girls’ basketball game, so I missed quite a bit of it, opting to sit in the gym rather than the sun. I checked in on them at half time, and the score was 2-0 favoring the yellow team once again. The yellow team won the game 5-3.

For basketball, Brett Roberts coached the white team, and Steven Privratsky coached the blue team. At halftime, the score was 17-14 white over blue.

That changed in the second half, however, as Queeny continued to drive forward and make baskets. With one minute left on the clock, it was 31-28 favoring blue. Vienna pushed through and made a layup, putting the score at 31-30. With 4 seconds left on the clock, white called a time out, and they attempted to win the game with one more shot, but the buzzer sounded, and the game ended 31-30. That was the first game a blue team had won thus far. Well done.

In years past, All-Stars has been for the elite few who show great skill or enthusiasm in a sport. This year brought a change with an all-camper dodgeball tournament. “I think it was nice how we took a break from the usual All-Star games for a little while,” Talea said.

The gym was split in half, leaving one court for girls and one court for boys. I did not have the luxury of watching the entirety of every game—it’s impossible to be in three places at once, but I did my best.

Each dorm played each other three times. The best of three would move on and play the team that had the same ranking as them, working through until one dorm reigned supreme. One of my favorite moments was watching Virgilio of 3B go against nearly the whole of 1B and win. That was epic. He spun and ducked, knocking them out one by one with the large foam balls.

In the end, 2B won the overall tournament for the boys, and 1G took it for the girls. The crowd went wild.

During the second half, I was entertained by the overhead passes that blue would make to each other, each teammate knowing where they needed to be so they could make the layup.

The white team was dragging, but Jesse of 4B managed to get a basket from the three-point line, and that helped them a bit.

With 22 seconds left on the clock, blue was leading 41-39. White had to do something, but blue had the ball.

There were 2.1 seconds remaining on the clock when a foul was called. It was white’s ball. They had barely any time, but maybe they could get a three pointer and win the game by one point. We held our breath, the ball went down the court, leaving the player’s hands just as the buzzer sounded, and it soared through the air…and hit the back of the net, bouncing off with no points for the white team.

It was a valiant effort and an exciting game. Blue won 41-39.

On Sunday, campers and staff alike were joined by visitors on the softball field to watch the girls and boys play. Occasionally the ball took flight, but never went right. In both games, the ball consistently went to center and left field, aided by the wind. Mr. Malone kept a running commentary through the speakers, playing traditional baseball music from his iPhone.

The girl’s game was played first. Christina of 2G made a beautiful catch of a foul ball halfway through the game. All of the girls played admirably, despite the 53 percent humidity. The game ended in a 7-7 tie.

The boy’s game was fun to watch. Mr. Turgeon and Mr. Burns joined in the fun as well. At one point, Micah of 3B nearly ended up in a pickle between third and home, but crossed the point of no return and was taken out. Mr. Turgeon’s team won 25-20.

All-Stars of pyc 2017 was filled with close scores at the end of each game. “It was cool to see more close games than in past years, due to more teens at the same skill level being able to participate,” volleyball instructor Joshua Sloan said. It was also more inclusive with the dodgeball tournament, and an amazing race activity following the softball game. Each dorm ran around campus following clues and completing activities like running a relay with a Styrofoam plane, and finding hidden flags and singing for a camera as dramatically as possible. Adrienne said, “I especially liked the scavenger hunt. We were all so tired by the end, but it was awesome.”

This all led to the awards night, where campers and dorms received recognition for accomplishments, and the teen talent contest winners were announced.

In previous years, the winners were announced and came up on stage to receive their prizes, which was always confusing because we didn’t know which art pieces belonged to whom and what the winning pieces looked like. This year, we saw a video that showcased pictures of the art and video clips of the performing and graphic arts. This helped cut down on time and was more enjoyable to watch.

Pyc 2017 has landed, but the campers can now keep their momentum and continue flying as they live right.