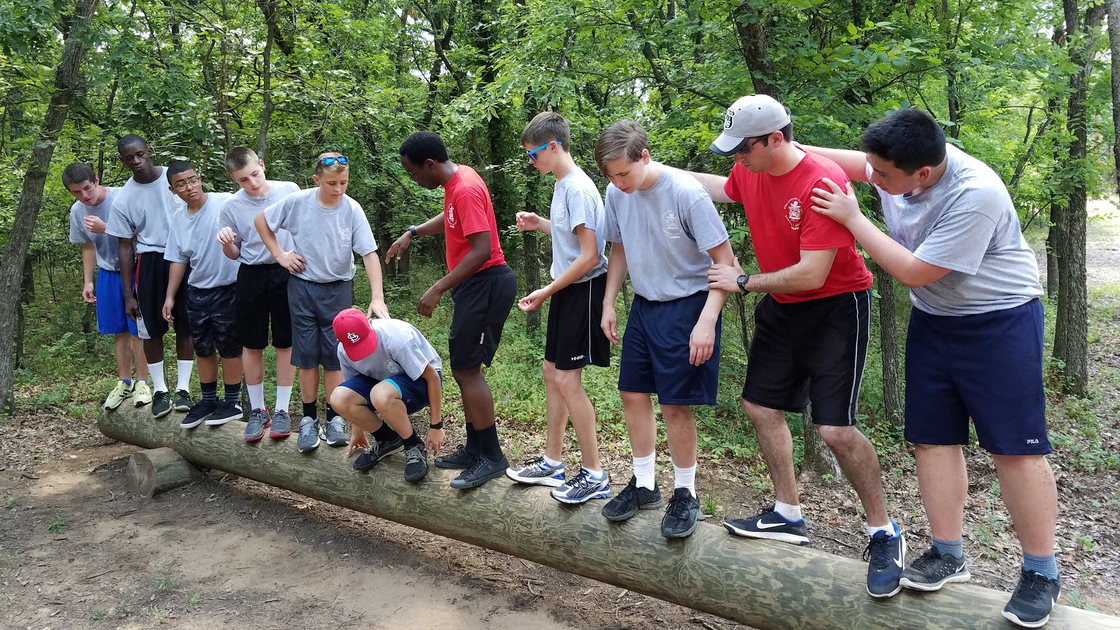 Every year, campers have a chance to take a trip off campus for something new and exciting. In years past, they have gone to climb rock walls, jumped on large trampolines, and even climbed around on a massive ropes course. This year, teens went to a team building facility for games and a zip line.

On Thursday, I sat with 17-year-old Corgan from 5B, who filled me in on the events of the morning. The dorms arrived in busses and were greeted by two men named Craig and Connor. They led the two dorms, 4B and 5B, to an open grassy area and had them pick a leader.

They started off by playing a game called leap pad. A circle of panels numbered one to twenty-five surrounded them. The game required that each of the men from each of the dorms touch a number and continue around the circle until everyone had gone through. It took them a couple tries, but the group trimmed their time to just over a minute.

“After that, they separated us into three teams,” Corgan told me. The first team couldn’t speak, and the second team could see team number one—but had their backs to team number three. The third team was blindfolded as they sat on the ground.

“The object of the game,” Corgan explained, “was to get them [team three] to realize that they had to pick up the balls in front of them and get them into the purple bag.” Team number one used gestures that team number two would translate into directions for the third team.

The whole point of the game was to help the participants work on their communication and their teamwork skills. “I think we all feel a lot better about working together now,” Corgan said.

Following that, the dorms split up. One went to the zip line with Connor while the other stayed with Craig. Craig helped them work on their teamwork and strategy. He had them all line up on a log and explained that they weren’t allowed to talk or fall, but would have to get themselves in the order of their birth months. First they attempted to hold onto each other as they tried to shift, but they kept falling off. Instead, they crouched down while one person stepped over them and then into their place in the line. “Eventually we got our stuff together, and we pulled through it,” Corgan recalled.

After the dorms were done at their different stations, they switched places, and 5B moved to the zip line. They each took a turn strapped in with the harnesses, and sailed down and across to the other side. Corgan definitely considered it his favorite part.

Claire, a seventeen-year-old from 2G, told me a very similar story with the help of her fifteen-year-old dorm mate, Raphaella. The girls from 2G went with 6G and played a type of dodgeball game in a wooden pit before splitting up for the log and the zip line. To get to the zip line, they had to climb a very tall telephone pole. The platform at the top is where they would harness up and sail through the trees to the other side, letting gravity do the work.

Raphaella thought the exercise on the log especially helped with dorm unity. Claire agreed: “When you first get into your dorm, everyone is just kind of personal and shy, and it [the log game] helped to break those boundaries.”

When I asked them if they would do it all again, the answer was an adamant “Yes.” They hope that everyone enjoyed it as much as they did, and I can say for myself that I enjoyed seeing it through their eyes.